ABOARD THE NATIONAL GEOGRAPHIC SEA BIRD — After announcing
a partnership with the fitness and lifestyle brand Exhale, Lindblad Expeditions
last month began hosting wellness-focused cruises, an acknowledgment of the
growing trend of travelers wanting to feel healthier and stay fit while on the
road.

“Wellness on the whole is taking off,” said Alex
Khoshaba, a Chicago-based travel adviser for Travelex International who
specializes in wellness and adventure travel. “People are way more
interested nowadays then ever before. And it’s not just young people; it’s
everybody.”

Khoshaba was one of several travel sellers aboard the Sea
Bird earlier this month to experience the wellness product firsthand.

“Everybody from 18 to 70 years old shows up to do
everything and gives it their best go,” she said.

The new three- and four-day Base Camp Baja voyages sail from
La Paz in Baja California Sur to the Espiritu Santo, Isla Partida and Los
Islotes islands in the Sea of Cortes aboard the 30-cabin vessel. There were
seven departures in December 2017 and January 2018 for this initial run, but
the company is already planning to add more.

There will be a new set of Base Camp Baja wellness cruises
offered on the National Geographic Venture, which is launching later this year.
They will all be four-night sailings, and the departure dates are Dec. 22, 26
and 30 as well as Jan. 3 and 7 in 2019. Rates for those cruises will start at
$2,650 per person, based on double occupancy.

The National Geographic Sea Bird anchored off the coast of Espiritu Santo in the Sea of Cortes. Photo Credit: Michelle Baran

“In creating the Base Camp Baja voyages, we wanted to
accomplish several things: to create short getaways, to create a highly active
experience and to incorporate an imaginative wellness component which took full
advantage of the landscape,” said Lindblad CEO Sven-Olof Lindblad. “To
that end, we decided to partner with Exhale to work with us on the wellness
aspect, recognizing their holistic approach would be a very successful match.”

There are several factors going for the new product, said
Michelle Bemis, senior travel consultant for McCabe World Travel, based in
McLean, Va., who was also aboard the Sea Bird this month.

“I think it’s a wonderful combination of letting people
explore their minds and explore their body at the same time,” Bemis said.
Following the holidays, she said, clients are keen to do something that is in
line with New Year’s resolutions on health and wellness. In addition, when cold
weather invades much of the U.S., people look for a quick warm-weather getaway.
Lindblad’s Base Camp Baja voyages offer all of the above.

Those on the Jan. 7 sailing, myself included, can attest to
that. After two days of cruising the scenic Sea of Cortes, not only did we have
the nature encounters and conservation conversations for which Lindblad is
known — everything from visiting sea lion breeding grounds to a rare sighting
of killer whales — but we were also invited to take part in fitness
opportunities, all underneath the warm glow of the Baja sun.

On the first day, our options included a sunrise barre
workout and yoga class with Exhale instructor Chelsea Kruse. The Los
Angeles-based Kruse led her yoga classes with an engaging, lighthearted
attitude.

The itinerary also offered a choice of three hikes ranging
in difficulty from an easy half-mile stroll to an arduous five-mile, 600-foot
climb over rocks and boulders to a coastal lookout point atop Isla Partida.

There was also the opportunity for snorkeling, kayaking and
stand-up paddleboarding as well as a sunset chill yoga class.

Participation in all the activities was impressively high,
regardless of the age of each passenger.

We were rewarded with a dinner and bonfire on an idyllic
island beach, which ended with some impromptu guitar-playing and singalongs by
passengers who were clearly feeling lifted by the entire experience. 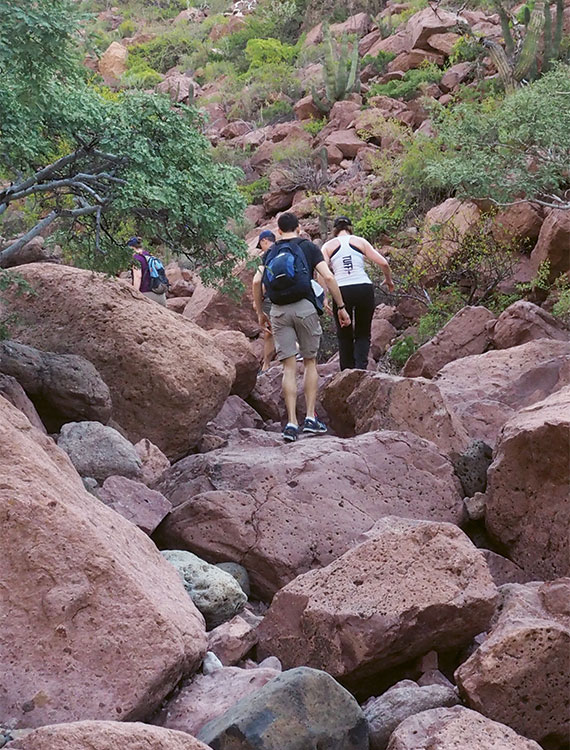 Passengers on a five-mile, 600-foot climb over rocks and boulders to a coastal lookout point atop Isla Partida. Photo Credit: Michelle Baran

The second day had a decidedly more mellow vibe, a chance to
rest and reflect a bit if passengers so chose. We again had the opportunity to
do a sunrise yoga class as well as snorkeling with the sea lions at Los
Islotes, a stand-up paddleboard yoga session in the afternoon, along with more
hikes and kayaking and a chill yoga class to end the day.

The option to just bask in the sun on the beach was also
available.

The food onboard during the cruise had a refreshingly
healthy bent. A fresh smoothie was brought out each morning following yoga, and
the breakfast buffet usually included eggs as well as fruits, vegetables,
oatmeal and yogurt.

Lunches featured a salad bar and plenty of sides made with
fresh produce. Vegetarian and gluten-free options were always available.

Dinners, too, felt clean and lean, with either a meat or
veggie entree accompanied by nutritious sides. There were some carbs available
in the form of bread and butter and desserts. And, of course, there was
alcohol. But generally speaking, the options were much healthier than on a
typical cruise. Even the snacks were wholesome, such as trail mix, granola bars
and dried fruit.

For those who wanted to partake more wholeheartedly in the
wellness aspect of the trip, two massage therapists were onboard, offering
one-hour massage treatments for $120.

Getting to La Paz isn’t a short journey. It requires first
traveling to San Jose del Cabo Airport (a full day’s flight from many U.S.
destinations), followed by a nearly three-hour drive to La Paz.

While two days of travel for, essentially, two or three days
of sailing might not seem like a worthwhile investment for some, it actually
felt like a very complete getaway, a real chance to detach from reality, to
engage with nature and to self-nurture in a way that meant returning home
feeling totally recharged.