Having lunch 14 stories above the ocean, projected out 25 feet over the side of the ship on a 9-ton tubular steel platform is, to say the least, an unprecedented experience.

Demand for the venue, dubbed “The Magic Carpet” by Celebrity Cruises, is sure to be high when the groundbreaking Celebrity Edge, the first of a new class of Celebrity ships, arrives in Fort Lauderdale in November.

Only one other meal had been served on the Magic Carpet before I took a seat at a table with some journalists, travel agents and Royal Caribbean Cruises Ltd. chairman Richard Fain on a shipyard tour of the vessel in St. Nazaire, France.

Fain had lunched there the day before and said that despite being tired and hot from a long plane ride, stepping out onto the long-planned Magic Carpet left him with goosebumps all over his arms.

Lunch is set up on the Magic Carpet as construction continues at the Chantiers de L’Atlantique shipyard in St. Nazaire, France. Photo Credit: Stewart Chiron

The first thing to note is the view, which was panoramic from our perch adjacent to Deck 14. We dined high above the sprawl of the Chantiers de L’Atlantique shipyard and the majestic expanse of the nearby Loire River.

I think the view will be even more remarkable at sea, when the azure waves are below and the ship is moving.

A second impression is that there were a lot of people on this thing! Brian Abel, Celebrity’s senior vice president of hotel operations, said the Magic Carpet is designed to accommodate up to 100 diners. I counted 17 tables each set up for four to eight people for our lunch plus lounge seating at either end with coffee tables that could be used for meals.

It didn’t feel crowded, although it didn’t seem spacious, either. Rather, it drove home how sizeable the platform is.

Because the Celebrity Edge was not yet a working ship with working galleys, we chose our food from a buffet spread set up on the resort deck. In practice, the plan is for food to be delivered by waitstaff once the ship is fully functional. 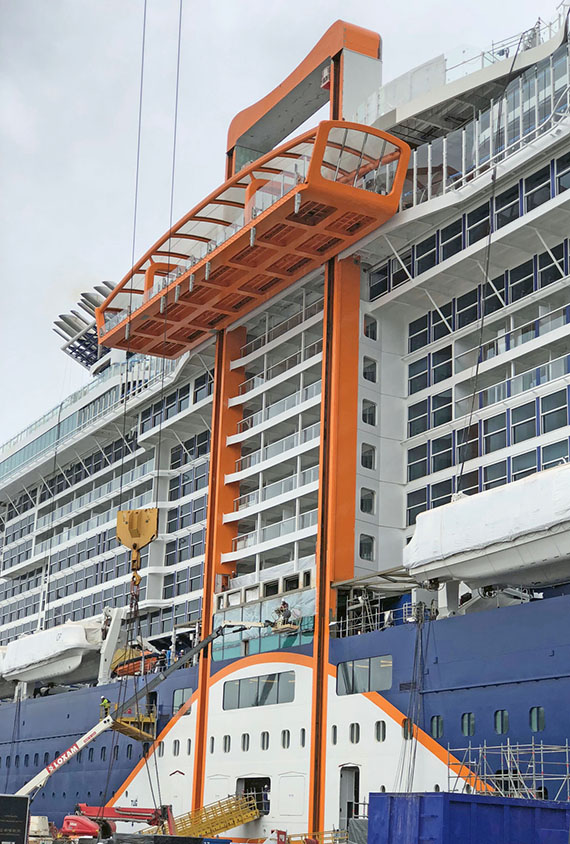 The Magic Carpet moving platform clinging to the side of the Celebrity Edge stands out in both form and function. Photo Credit: TW photo by Tom Stieghorst

Part of the magic of the Magic Carpet is that it ascends and descends the side of the ship, stopping at several decks. Fain said it takes about 10 minutes for the platform to move from Deck 1 to Deck 14.

Meals are also planned for when the platform is stopped on Deck 5, where it will serve as an extension of the seafood raw bar. “I think it might actually be a better experience on Deck 5, because it will be closer to the water,” said Rich Campbell, president of Atlantis Events, which specializes in group cruises for LGBTQ guests.

One concern I had was that it might be too windy on the Magic Carpet. Fain agreed that it is a concern and said the ends of the platform were tweaked in the design process to more effectively divert the wind.

On some occasions it may be too breezy out there. On others, say a calm summer evening on the Mediterranean, it could be enchanting.

Visually, the platform stands apart from the blue ship partly because it is painted orange. Campbell said he thought there was no better color for the platform because of that bold contrast. Fain said he and Celebrity president Lisa Lutoff-Perlo liked the orange because it emphasized the platform’s singularity.

“It’s something quite differentiated from the other colors onboard,” Fain said, adding that the Magic Carpet “was quite unique. We wanted to make it different.”

Over the past few years, cruise lines have been experimenting with features that in some fashion take guests beyond the edge of the ship. Various ships have waterslides that loop out over the side. Princess Cruises has its Seaview glass-bottom walk, and Norwegian Cruise Line has the Plank, a steel I-beam offering a short stroll 6 feet beyond the brink, high above the sea.

For better or worse, the Magic Carpet makes those efforts look timid, upgrading the experience by several levels. I for one am looking forward to trying it out on the open ocean when the ship comes to Florida in November.