Cruise passengers spending time ashore in Montreal don’t have to walk far to find themselves in the heart of Old Montreal, a charming district of restaurants, 18th century stone buildings and historical French culture.

It’s a nice place to spend an afternoon, or more, and it’s less than 100 yards from the base of the Alexandra Pier.

Montreal is gearing up to celebrate its 375th anniversary next year, and a lot of construction projects are underway. Not the least of them is a $78 million makeover of the 50-year-old cruise terminal.

Expected to be finished in time for the season’s first call on May 6, the terminal will bring Montreal’s cruise port into the 21st century, making for a more pleasant passenger experience, said Yves Gilson, director of marketing and cruises for the port.

The old terminal had parking on the ground floor, so everyone had to climb to the second story to embark. “Buses had to go up the ramp,” Gilson said. “It was not up to today’s standards.”

The new terminal will have facilities on the ground floor with a green roof on the second floor providing vistas of the St. Lawrence River. It will be a little shorter than the old one, allowing for a green space at the end sloping down to the water that will be open for residents when cruise ships aren’t in port.

A shipping container displays a rendering of the Montreal cruise terminal, which is under construction in the background; it is expected to be ready for the season’s first call in the spring. Photo Credit: Tom Stieghorst

Another planned feature is a 300-foot observation tower designed to echo the cubical stack of Habitat 67, a landmark housing complex on Marc-Drouin Quay, an island just off shore.

Parallel to the terminal will be a second building, primarily for parking but designed to function as a terminal with two ships in port. There’s even the capacity to dock a third small ship at the end of the pier, Gilson said.

The building will be stylish enough to be rented outside the cruise season for events and exhibits, Gilson said. “A cruise terminal [here] by itself doesn’t bring in enough revenue to be sustainable,” he said.

About 570 miles upriver from where the Saint Lawrence Seaway meets the Atlantic Ocean, Montreal gets the majority of its cruise calls in September and October, when leaves are turning.

It has had some success attracting cruises during the summer, primarily from Holland America Line, whose 1,350-passenger Veendam made seven calls from May through August this year.

Four ships called for the first time this year, including the Azamara Quest, the Viking Star, Hapag-Lloyd’s Europa 2 and the Seven Seas Mariner from Regent Seven Seas Cruises.

The size of ships calling on Montreal is limited by the height of the Quebec Bridge, near Quebec City, which has only 49 meters of clearance. The largest ship to call in Montreal is Aida Cruises’ 2,050-passenger AidaDiva.

“The megacruise ships will never come to Montreal,” Gilson acknowledged. But he sees great potential in the boom of expedition-style ships such as those being planned by Ponant, Crystal Cruises, Hapag Lloyd and others.

Another regular customer is the 200-passenger ship operated as the Saint Laurent by Haimark Line before its bankruptcy, now sailing the Saint Lawrence and Great Lakes as Victory Cruises’ Victory I. 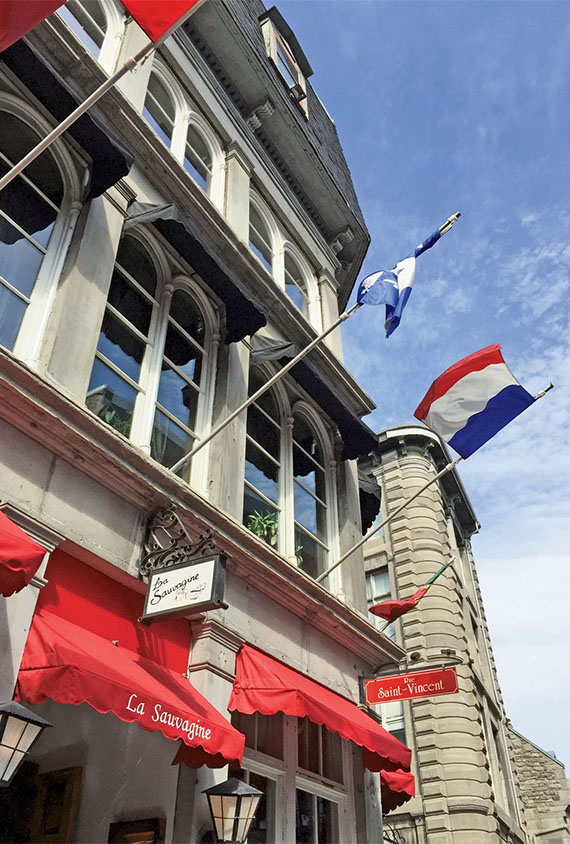 La Sauvagine, a restaurant on Rue Saint Paul in Old Montreal. The historical neighborhood is just steps from the new cruise terminal that is scheduled to open in May. Photo Credit: Tom Stieghorst

Montreal has 46 scheduled calls this year (including three on Oct. 1) delivering about 68,000 passengers. That is expected to jump by 25% next year, said Nathalie Gaudet, project manager for the Montreal Cruise Committee.

“We definitely have more bookings because it is going to be a big year,” Gaudet said.

Because the old terminal is being rebuilt, passengers this year have boarded through temporary tents on a cargo wharf several miles up river. Montreal is mainly a turnaround port, but there are some transit and partial turnaround passengers, as well.

The new terminal will have some technical upgrades for the cruise lines. Most importantly, it will have direct gray- and black-water connections for ships to offload at the pier. “This [eliminates] a big cost for the cruise ships, having to bring in a [disposal] company,” Gilson said.

Electricity will also be provided to enable ships to shut down their diesel engines in port. 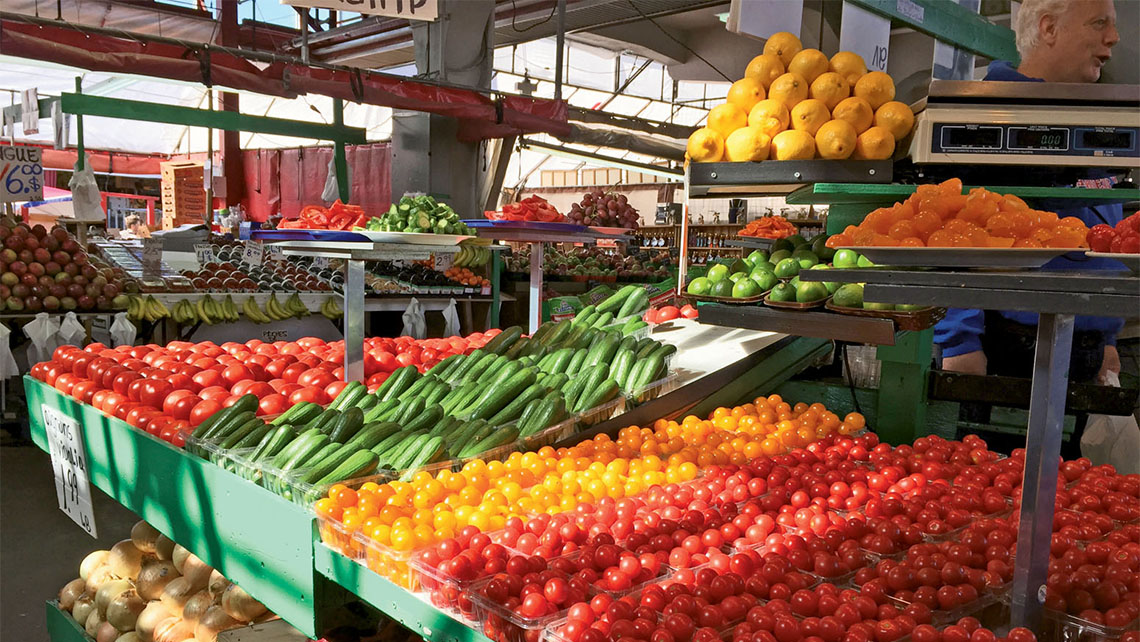 There’s bountiful produce to be found during the height of the cruise season at the Jean-Talon Market in Montreal’s Little Italy neighborhood. Photo Credit: Tom Stieghorst

Visitors to the city of 1.7 million will have plenty to keep them busy during port calls.

In addition to the convenience of Old Montreal, passengers can check out the observation deck on the 47-story Place Ville Marie downtown, see the spectacular gothic revival interior of the Notre-Dame Basilica or tour the Montreal Botanical Garden.

Near the garden is the tallest inclined tower in the world, rising to 540 feet at a 45-degree angle, a leftover from the 1976 Olympic Games.

There is also a terrific open-air produce market in the city’s Little Italy neighborhood.

And next year will bring a wide variety of events commemorating that 375th anniversary of the city’s founding in 1642.

Floating pier will bring ships back to historical Jamaican port