Oceania Cruises was founded on the recycled ships of Renaissance Cruises, and its first ship, dubbed the Insignia, has now been deftly renovated, making its design more consistent with that of Oceania’s two newbuilds, the Riviera and Marina.

The old Insignia was handsome, masculine and sturdy, but also dark, overstuffed and literary. The new design has kept some of the old scrollwork and dark wood. There was such an abundance it could hardly be eliminated without starting over. But the look crafted by Miami’s Studio Dado is notably lighter, softer and clearer.

Start with the Grand Dining Room. It is still grand but not as upholstered and faux as before. The old room palette was copper, gold, bronze and cream.

“The Grand Dining Room had a very warm, very brown feel,” said Tim Rubacky, director of corporate communications at Oceania. “There were Renaissance-era murals on the walls and ceiling.”

Now, the cherubs that used to spy on diners from the central dome have been replaced by a large crystal chandelier — the same approach found on the Marina and Riviera.

The bookcase that once separated the main dining room from a bar/waiting area has been replaced by 6-foot abstract metal sculptures. Photo Credit: TW photo by Tom Stieghorst

A floor-to-ceiling wood bookcase that used to separate the bar/waiting area from the dining area has been jettisoned. Instead, there are 6-foot abstract metal sculptures set into the cabinetry, providing more transparency between the rooms.

The color palette has lost its coppers and golds, kept and expanded the cream and added lots of dove gray.

“All of the artwork throughout the ship is new, as well,” said Rubacky, with gilt-framed 18th century portraits replaced by simply framed abstracts that might bring to mind Cezanne or late Monet.

The surfaces, finishes and coverings are more tactile than before. There is new signage in public areas and on the stateroom doors, which for the first time have Braille lettering. The grand two-deck staircase that was built on every Renaissance ship has been made over in silver leaf, with more modern balustrades and a new chandelier.

“Even the elevator cabs have been completely refurbished,” Rubacky said. “The tone of it is to give it more of a residential, boutique hotel feel.”

Rooms have been lightened, brightened, redesigned to add space where possible and given more modern technology.

There are USB outlets, for example, next to the beds, and directional LED reading lamps have been added, as well. There is a new interactive TV system, which is being gradually rolled out fleetwide.

In the bathrooms, tubs have been removed in favor of a walk-in shower with transparent doors instead of opaque curtains.

“The refit benefited them greatly because they feel much larger now,” Rubacky said.

The rooms are now decorated in blues, whites and light grays. The old scheme was shades of brown. “It fit in with the very traditional English country-house look of the ship,” Rubacky said. 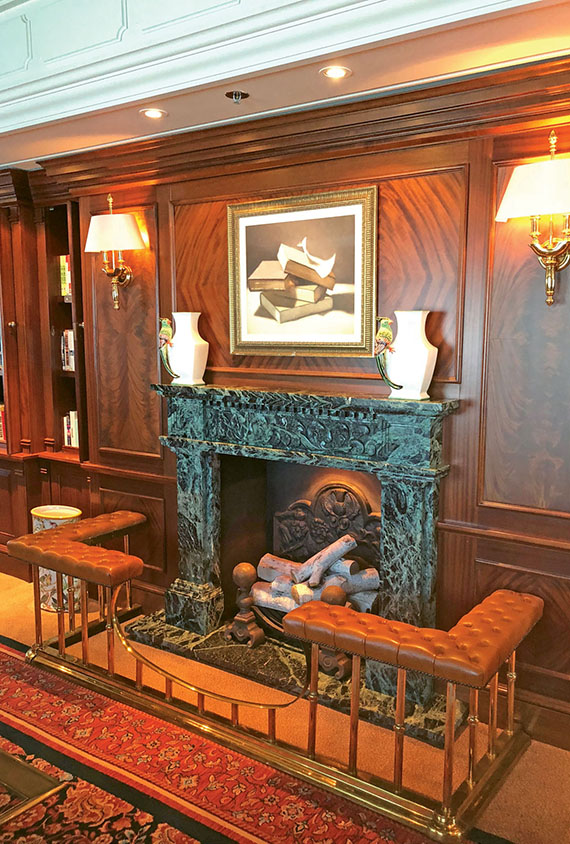 The faux fireplace in the Insignia library was left unchanged with the recent redesign. Photo Credit: TW photo by Tom Stieghorst

The look extended as far as having two faux fireplaces on each ship. One of them was in Martini’s bar area, and its place is now occupied by some wall covering in front of a large leather sofa.

The other, in the ship’s rather Edwardian library, remains untouched, as does the rest of the tradition-bound space. “I think we would have been tarred and feathered if we had changed that room,” Rubacky said.

Adjacent to Martini’s is the ship’s casino. Rubacky said the chairs and tables are now lower to the ground. “It helps it feel more open, but I also think it makes people feel more at home,” he said.

The photo gallery has been replaced by a long, organic piece of art. “It’s meant to represent barnacles and sea shells,” Rubacky said. “It adds a bit of whimsy to the ship.”

Crews took 16 days in drydock in the Bahamas to transform the Insignia. Despite the overall modernization, Rubacky said there is a continuity between new and old that Oceania wanted preserved.

The Renaissance ships were the work of designer John McNeece, who produced all eight between 1998 and 2001. “They had a feeling of opulence, and we wanted to continue that thread,” Rubacky said.

No more dramatic contrast can be seen on the Insignia than in the treatment of two specialty restaurants, Toscana and the Polo Grill.

At the entrance to Toscana, a service bar and waiting area has been removed, replaced by more banquette seating. Rubacky said the bar was one of the most underused areas on the ship.

The whole room pairs white walls with cream upholstered chairs, tablecloths and wood trim and detailing. The carpet is the only busy note in an otherwise serene space.

The Polo Grill on the other side of a galley that splits the two restaurants was left largely the same: dark, heavy, clubby. Like the Library, it is viewed as an icon of the brand, Rubacky said.

“It’s a hallmark space, so we didn’t want to change it,” he said.

Areas at the top of the ship, some of which were previously renovated, were not altered dramatically. The Waves bar and grill near the pool has new mosaic tiles, and a new barbecue wagon is serving grilled meats.

In the Horizons observation lounge, a large floor-to-ceiling clamshell structure that blocked the view from parts of the room has been dismantled, and a lower stage with a circular dance floor occupies the area instead.

Agents say Oceania made Sirena seem like a new ship