About an hour west of Durban, the landscape opens into a wide canyon ribbed with green ridges. The Valley of 1,000 Hills — so named for the way it strikes viewers, rather than any official census of its elevation changes — is home to the traditional Zulu villages that give this South African state its name, KwaZulu-Natal, or “the place of the Zulu.”

It was here, in the village of iSithumba on a recent morning, that I found myself sitting on a straw mat inside the home of a traditional faith healer, or sangoma. Inside the round, one-room house with blue walls, she discussed her training; the herbs, bones and potions used in her work; and the role of her profession in the context of modern life. Mental illness caused by demons? She can heal it. Mental illness caused by contemporary stress? See a psychologist.

I ventured a question: “Were you happy to receive your calling as a healer?”

She snorted. “It’s not an easy thing to accept. It’s a very different life.”

Subject to strict rules and customs, healers’ lives are indeed distinct from that of other village residents, let alone the 3.5 million Durbanites just an hour away. Getting to learn about that life in person on a cultural tour with iSithumba Adventures was a highlight of my visit to Durban, a melting pot metropolis that serves as both a jumping-off point to explore the region and a destination in its own right.

A vendor at Durban’s muti market sells medicinal herbs, barks and powders used by traditional healers, or sangomas. The market is a fascinating place to visit, but one best explored with a guide. Photo Credit: Sarah Feldberg

South Africa’s third-largest city, Durban has emerged from the shadows of Cape Town and Johannesburg in recent years and come into its own with a cleaned-up beachfront, hip urban redevelopment projects and easy-access adventures for adrenaline junkies. The business-friendly Hilton Durban is finishing extensive renovations, and construction sites promise new accommodations in posh Umhlanga 15 minutes north of the city, where the coast is lined by condos and hotels such as the five-star Oyster Box, with its elegant restaurants and oceanview pool.

An hour’s flight from Johannesburg, itself accessible direct from JFK on South African Airways, the coast is a crucial draw. Set along a 3-mile stretch of sand known as the Golden Mile, Durban is a city with bountiful beaches, where families splash in warm Indian Ocean waters and surfers ride plentiful waves.

But Durbs, as it’s called, is more than a beach town. Just a few minutes into the city, all evidence of the sand disappears, giving way to colonial buildings, museums, art deco architecture and dense markets, where stalls selling intricate Zulu beadwork sit next to shops mixing masala spices to order.

“It’s Indian medium,” cautioned one vendor at Victoria Street Market as he scooped from heaping trays of brilliant cumin and turmeric.

The Indian community is a key ingredient in Durban’s culture stew. Indians arrived in South Africa as indentured laborers in the late 1800s to work the sugar cane fields, and today Durban is often referred to as “the largest Indian city outside India.” The area’s signature dish is bunny chow, a half-loaf of bread hollowed out and filled with hearty chicken, mutton or bean curry.

Across from Victoria Street Market is the muti (traditional medicine) market, an open-air bazaar where rows of herbs, barks and colorful powders sit alongside animal pelts and reptile skins, all with some medicinal power to cure physical and spiritual ills. A fascinating stop best explored with a guide and sans camera (photos are frowned upon), this is where sangomas (healers) purchase the tools of their trade. It’s also where Andrew Rall shops for African rose hip for his gin.

Rall is the founder of Distillery 031, a Durban-based company that produces a full line of craft spirits rooted in African ingredients, including the award-winning Durban Dry Gin, 031 Vodka and Ancestors Absinthe. A new rum is aging, and Rall offers tours of his facility at Station Drive Precinct, a former manufacturing zone that’s been redeveloped into independent boutiques and cafes housed in mural-clad warehouses.

Wandering the neighborhood on a Sunday, we stopped into the weekly Morning Trade market, where vendors slung fresh produce and flowers, iced coffee and bacon samosas.

“There’s a little bit more of a gravity to Durban now,” Rall said. “So many of the top creative people in South Africa are from Durban.”

And there is plenty to see beyond the city’s boundaries. Forty minutes south, we headed offshore to snorkel among blacktip sharks at Aliwal Shoal, watching the elegant predators glide effortlessly beneath the surface before returning to a postcard-perfect beach virtually void of visitors.

Game parks like the Hluhluwe-Imfolozi Park or the Nambiti Private Game Reserve are within driving distance, and for those more interested in cuisine and crafts, the Natal midlands offer a route with more than 150 potential destinations, including artist studios, ceramic shops, cheesemakers and breweries, as well as hiking trails to dramatic waterfalls. 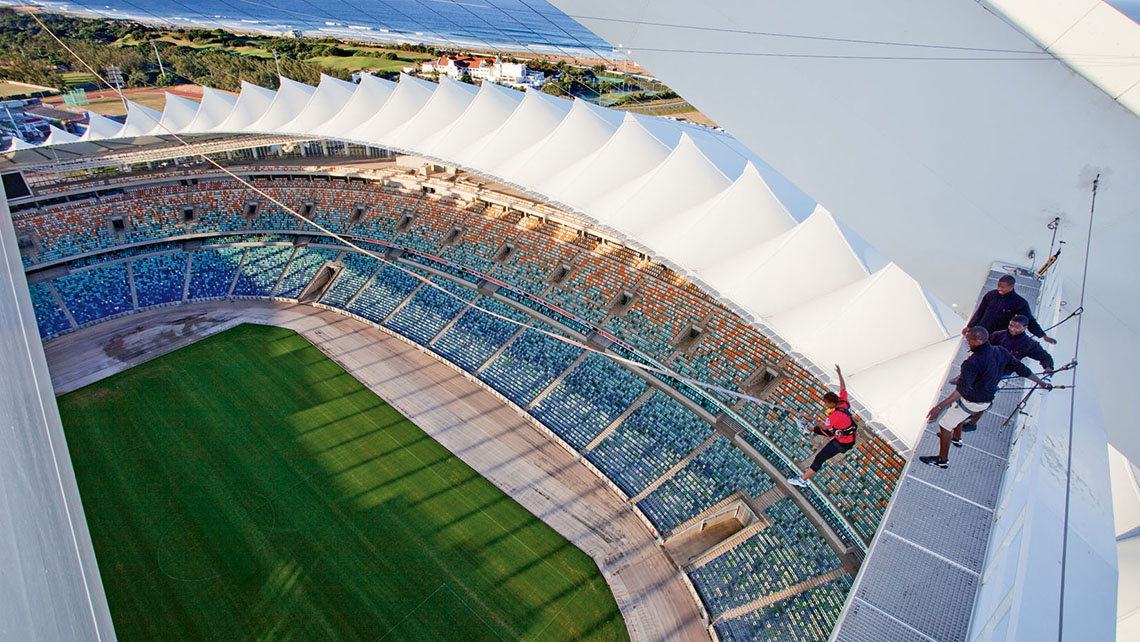 A thrill-seeker rides the Big Rush, a swing off a platform at Moses Mabhida Stadium, where visitors can also take in views of Durban and the Indian Ocean. Photo Credit: Courtesy of Durban Tourism Board

But you don’t have to leave Durban for a breathtaking vista. Built for the 2010 World Cup, the Moses Mabhida Stadium now hosts a scenic tram to a viewing platform atop its massive arch as well as the Big Rush, a don’t-look-down giant swing that launches from one of the arch’s upper struts. Harnessed visitors climb a staircase to a lofty vantage point, then, perched above Durban and its shimmering coast, they step off the ledge — and fly.