ABOARD THE NORWEGIAN JOY — Not unlike the twice-daily 747
flights that British Airways used to put on some transatlantic routes during
the summer, Norwegian Cruise Line is flooding the Alaska market this season
with two of its own “widebodies.”

The Norwegian Bliss and the Norwegian Joy are both headed
north, putting the line’s two biggest and newest ships side by side in a
premium region that has seen strong demand recently.

The pool and atrium in the Haven on the Norwegian Joy is covered by a retractable roof.

The ships are nearly twins, but not quite. The Joy came
first and spent a year as Norwegian’s dedicated ship in the China market before
management reversed course and pulled it from Shanghai.

A $50 million makeover ensued, as features installed
specifically to appeal to Chinese cruisers were stripped and ones that made
more sense for North American travelers were installed.

The Joy kept its stylized phoenix hull painting, but its tea
rooms, high-end shopping venues and two of its three casinos are history.

Some of the most enjoyable and memorable features of the
Bliss are also prominent on the Joy. Its pair of double-deck, forward
observation lounges, one for the main passenger base and a separate one for the
Haven enclave, will make for fine viewing of the mountains and glaciers of
Alaska.

At the other end of the ship, the go-kart track that was a
first in China has been reconfigured for Alaska to allow for more passing and
more exciting races, Norwegian Cruise Line president and CEO Andy Stuart said.

With the arguable exception of Cunard Line, which plans to
sail the Queen Elizabeth in Alaska this summer, Norwegian will have the only
ships in the market featuring a luxury enclave, the Haven.

On the Joy, there will be 91 accommodations with Haven
privileges, including several forward- and aft-facing suites that are not
contiguous with the three-story Haven complex. The Haven looks remarkably cozy,
centered around the only pool on the Joy with a retractable roof — a plus in
cold-climate cruising. 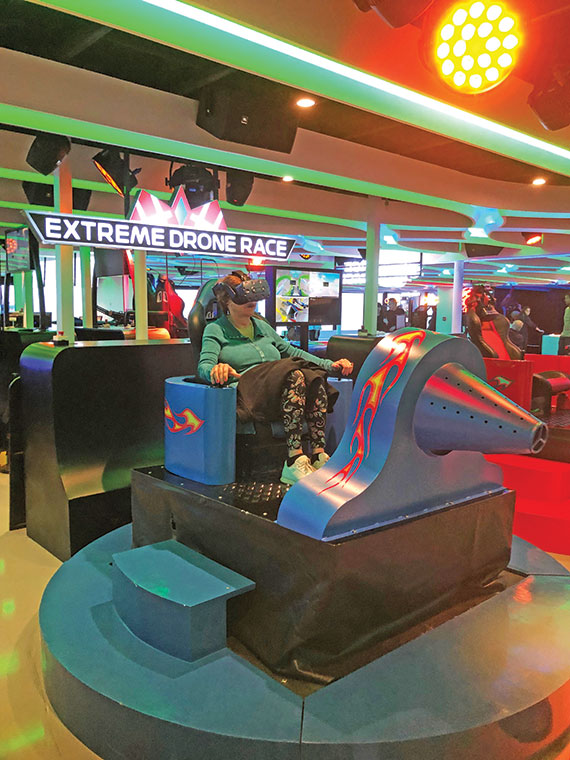 Extreme Drone Race is one of the virtual reality simulator games in the Galaxy Pavilion.

In China, the Haven had a VIP casino, but that has been
replaced by an expanded library. So unlike on the Bliss, the second level of
the Horizon Lounge (which used to be the casino), has windows but is enclosed,
and there is no staircase down to the first level.

Held over from the Joy’s service in China will be the Galaxy
Pavilion, which took up most of the space that would otherwise have been a spa.
The Pavilion is a large room in the aft devoted to virtual reality (VR) games.

I tried four VR simulators. My favorite was Walk the Plank.
Donning a safety harness and a VR headset, I set out on a plank about 8 inches
wide and an inch off the ground. But in the VR world, I was elevated 80 stories
above a busy streetscape, and my task was to rescue a stranded kitten at the
end of the plank. Staying on the straight and narrow was a scary challenge,
even though I knew I was barely off the ground.

I also took a VR roller-coaster ride, enjoyed a hang-glider
trip over canyons and mountains and blasted aliens and androids in the
Exterminator.

For younger children (primarily), there is the Wonder Wall,
an interactive video wall. Kids can color a fish or a turtle with crayons, scan
it and watch it appear in front of them on the video wall to interact with
other creatures. (A big shark scared my fish off the screen for a minute or
two.)

For now, the Joy is the line’s only ship with a Galaxy
Pavilion, but Stuart said the Norwegian Encore coming in November will also
have one. It is a nice jolt of new to the ship, which otherwise shares many
features of previous Breakaway and Breakaway-Plus vessels.

But there are a few other differences between the sister
ships Joy and Bliss. The upper-deck, indoor-outdoor restaurant space that is
occupied by Margaritaville on the Bliss and the Norwegian Escape is devoted to
an American Diner on the Joy. 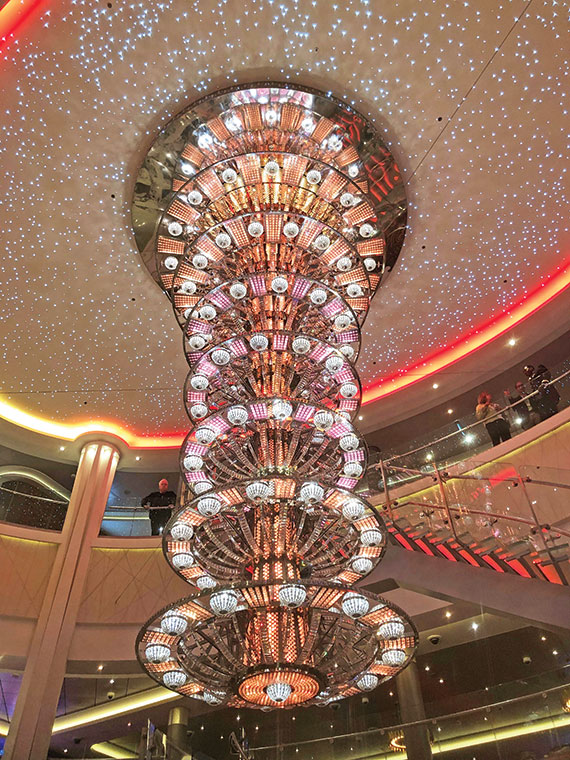 A showpiece chandelier in one of the atria.

Another restaurant, the Local, is arrayed around the atrium
in the space that held O’Sheehan’s on the Escape. On the Bliss, the new name
was adopted, but the look and feel remained. On the Joy, the pub grub remains,
but instead of the dark woods and Irish theme, the Local looks like a seagoing
branch of Crate & Barrel.

Another new wrinkle, one for the moment only available on
the Joy, is Norwegian’s concierge class. For a premium, which varies by sailing
and cabin choice, guests can have a bundle of amenities that includes priority
embarkation and disembarkation, priority reservations and seating for dining
and entertainment and exclusive use of La Cucina restaurant for breakfast and
lunch. 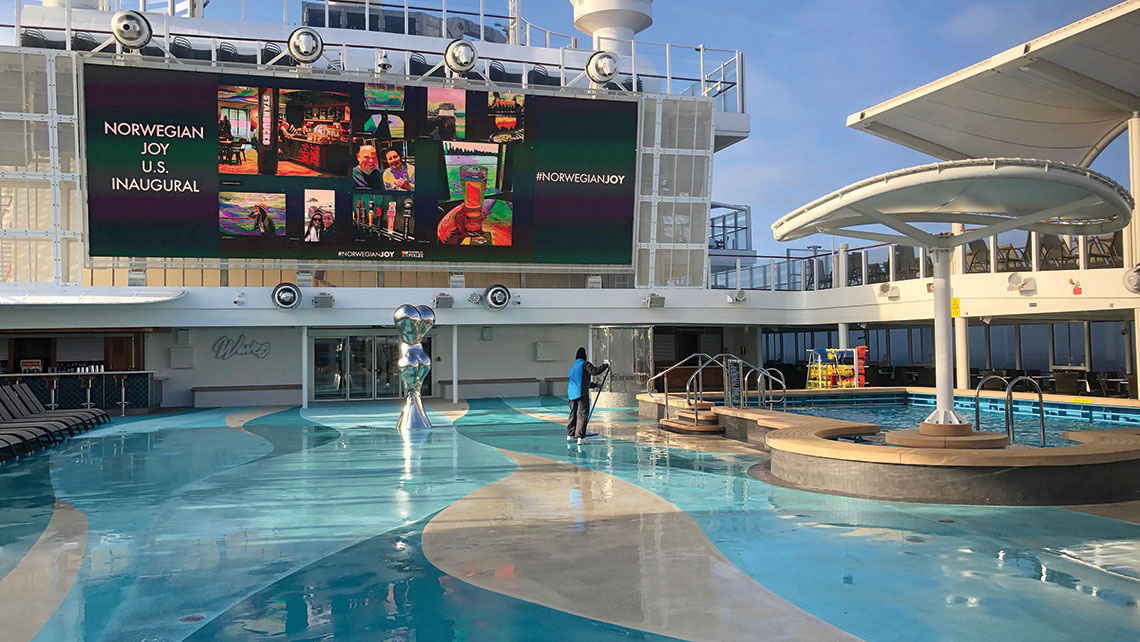 The Joy’s pool deck is a large open space. When the ship was in China, there was a garden with artificial grass and potted trees on the deck.

If there’s an area that could stand to improve on the Joy,
it is the pool deck, which was rather wind-swept and forlorn on our preview
cruise. When the ship cruised in China, there were potted trees in the space,
but they’ve been removed without adding anything back except a lone abstract
sculpture of a female form that seems rather unrelated to anything.

The area was a dead
zone except on sailaway day, when a dance party filled the deck. It suffers in
comparison to some of the pool areas on competing ships in the Alaska market.