If you love gray, you’re going to love the redesigned Azamara Journey. The ship recently came out of drydock with every cabin and suite redecorated with many of its public rooms redesigned, as well.

Azamara Club Cruises picked a lighter shade of gray along with beige, cream and a medium brown to lighten the feel of the ship’s interior, which had been built with a lot of dark wood.

Many of the darker fabrics in the ship have been replaced with lighter ones, as well. Burgundy curtains in the staterooms have given way to a patterned, silvery gray.

“It looks much fresher,” said Ryszard Gusmann, the hotel director of the Journey. “The combination of light colors and fresh linens gives you the impression of more space.”

At the same time, the neutral qualities of the grays and beiges give the vessel a relaxed and calm feel.

Some guests have wondered how the lighter shades will stand up cruise after cruise, but Gusmann said he’s not concerned. “Maybe in the high-traffic areas we have to shampoo it more often, but we like the look, so if we have to, why not?” he said.

That new look, with fresh carpets, wall coverings, fabrics and furniture, was a major part of a two-week drydock that produced the most extensive changes since the ship started sailing as the Azamara Journey in 2008.

Azamara also changed the uses of several public rooms and added a pair of spa suites with special access to the spa area. It carved out room for the suites by downsizing the ship’s public Internet room from 12 stations to two and relocating it away from the spa.

“People are traveling now with their tablets and phones,” Gusmann said. “We didn’t need 12 computer stations any longer.”

The spa suites also have the lighter, more airy tone that Azamara tried to set in its overhaul.

“They’re very modern, compared to other suites,” Gusmann said. That’s especially true of the bath area, which has a circular hot tub and walk-in shower combination that reminded me of areas I’ve seen on Celebrity Cruises or Viking Ocean Cruises.

The suites are reached via a short corridor that provides direct access to the spa lobby. “It’s nice and peaceful,” Gusmann said. “This corridor, there’s nothing happening.”

“Nothing happening” had been a problem in a different area of the ship. The former Looking Glass Lounge, a bar and dance space with top deck, floor-to-ceiling-window views of the ocean, was deserted much of the day.

To remedy that, Azamara changed the name of the space to the Living Room and began providing coffee and Spanish tapas during the day to try to boost usage. It is also now the venue for wine tastings.

Azamara hopes the change will better balance the passenger flow, drawing coffee drinkers from the smaller Mosaic Cafe, where they had a tendency to cluster.

Another venue that has been tweaked is the former Pool Grill, which is now the Patio. It still functions as a pool grill during the day, but after 6 p.m. it changes character. The linens are put away, and waiters take orders from a menu that includes hamburgers but also features more formal fare, such as beef paillard, chicken cordon bleu and salmon steak with pink peppercorns.

I had a Patio cheeseburger for lunch and dinner, and the evening’s Angus beef burger was larger and came out piping hot from the grill.

One popular addition to the staterooms is a charging port for a reading lamp and USB outlet next to the bed. New makeup mirrors in the bathrooms are another passenger request fulfilled.

However, the showers on the Journey remain some of the smallest I have ever encountered on a ship.

Although Azamara doesn’t carry a lot of families, there are a half-dozen of the 266-square-foot Club Continent suites with connecting doors to adjacent suites. Also, there are a dozen that have pullout sofa beds to accommodate three guests. Otherwise, the suites are intended for two.

“Travel agents need to be very careful” distinguishing between the two, Gusmann said. 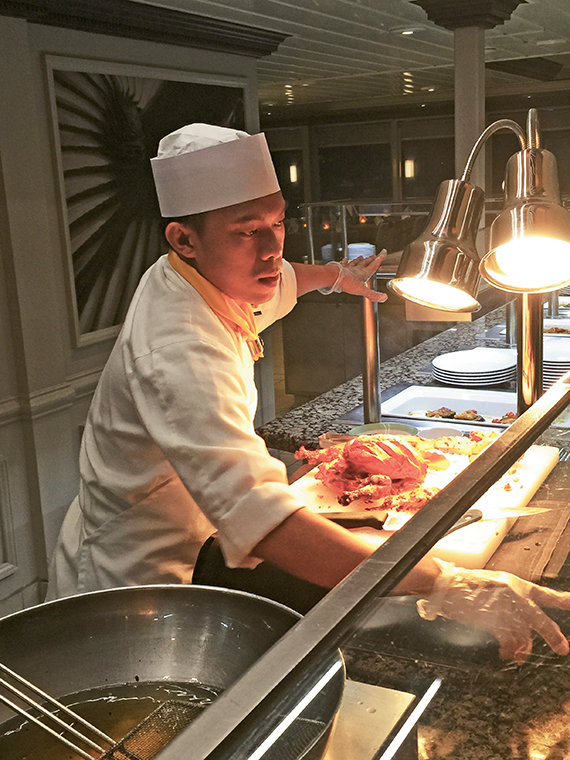 A chef on the Azamara Journey carves tandoori chicken on Indian Night at the Windows Cafe. Photo Credit: Tom Stieghorst

Food on the Journey was more comfort than gourmet, but that suited my tastes. It was hard to resist the concept in the Windows Cafe buffet restaurant, which offered a different national cuisine each night.

I lingered over French and Turkish dinners in the Sunset Bar, an outdoor seating area adjacent to the Windows Cafe that was slated to become an Asian restaurant in the drydock renovation but was retained after passenger feedback.

Entertainment on the 690-passenger Journey is limited, but I found myself seeking out Montreal guitarist Simon. The showstopper, however, was an evening with cruise director Eric de Gray, whose voice and showmanship packed the Cabaret Lounge the night he took center stage.

De Gray had a great touch for involving the audience and so clearly loves performing that it was infectious. His powerful tenor and folksy stories meant there’s something for everyone in his show.

One neat feature I didn’t get to try was the Night in Private Places, a sheltered sofa bed in a private outdoor area near the spa where couples can spend the night under the stars, weather permitting.

The $385 package comes with dinner for two, butler service from 7 p.m. to 10 p.m. and morning breakfast.

“[The concept is] only a year old, but it’s very popular,” said Gusmann, who had five reservations for it on our cruise.

I had to depart the ship’s 12-day sailing from Costa Rica to Los Angeles before two signature events: the AzAmazing Evening, a custom night excursion for all 624 guests on this cruise, and an overnight stay in Cabo San Lucas, Mexico, featuring another evening excursion to a local hot spot. Both are big parts of the brand promise for Azamara.

If there’s an area of the ship untouched by the renovation that should have been touched, it was the Drawing Room, a U-shaped space that primarily serves as a library. The carpet was changed, but the room retains the country club ambience of the ship’s original design, with dark wood, an elaborate faux fireplace and a raised ceiling with a winter-garden design.

It was tranquil but underused. Azamara employs it for its Best of the Best dinner one evening for its top suite guests and for lectures. There was a piano player in the afternoon.

All in all, I found the Azamara Journey to be a very comfortable size. It was easy to get around, the service was friendly and the officers were affable in the way they sometimes aren’t on larger ships. The new decor should keep Azamara in the mix in the upper-premium segment.

Azamara triples down on destination-focused cruising