Carnival Cruise Line faces an unprecedented task with its new ship, the Mardi Gras: ensuring that the thousands of passengers booked on each cruise don’t end up in the same place at the same time.

When it is delivered in 2020, the 180,000-gross-ton Mardi Gras will be Carnival’s biggest ship ever, expected to routinely carry more than 6,000 guests on seven-day Caribbean voyages out of Port Canaveral.

To make sure those guests don’t feel crowded or caught in long lines, Carnival has been hard at work engineering the flow of people around the 15-deck vessel by salting decks with popular venues.

“We’re trying to do something different with this ship, and I would say guest dispersal is one of the guiding principles in putting this ship together,” said Glenn Aprile, Carnival’s director of innovation.

“This will not be a ship where everybody is upstairs during the day and downstairs at night,” Aprile said. “We’ll have activity throughout the ship.”

A rendering of the atrium on the Carnival Mardi Gras, which was designed in part to ease the flow of passengers between the starboard and port sides of the ship.

The Mardi Gras will be the first ship in Carnival’s XL class as well as the line’s first ship powered by liquefied natural gas. A comparison of the plans announced so far for the Mardi Gras with the line’s Vista-class ships shows how Carnival has tried to harness every public deck in service of flow management.

In the Vista class, the second deck above the bulkhead deck is an innovative family-centric cabin area built around the Family Harbor Lounge. On the Mardi Gras, two more family-oriented venues will be located there: Camp Ocean and Dr. Seuss Bookville.

“We thought it made sense for Family Harbor and Camp Ocean to be close together, because they complement each other really well,” Aprile said.

On Vista-class ships, those venues are higher in the ship and feature an outdoor play area. But on the Mardi Gras, they will draw families to lower decks, freeing space for other attractions up top.

Also moved lower was the spa, which is on Deck 12 forward on the Vista-class ships. It will be on the second-lowest deck on the Mardi Gras. That has prompted some grumbling that there won’t be much light, but Aprile said that even farther down there will be a few treatment rooms with ocean views. 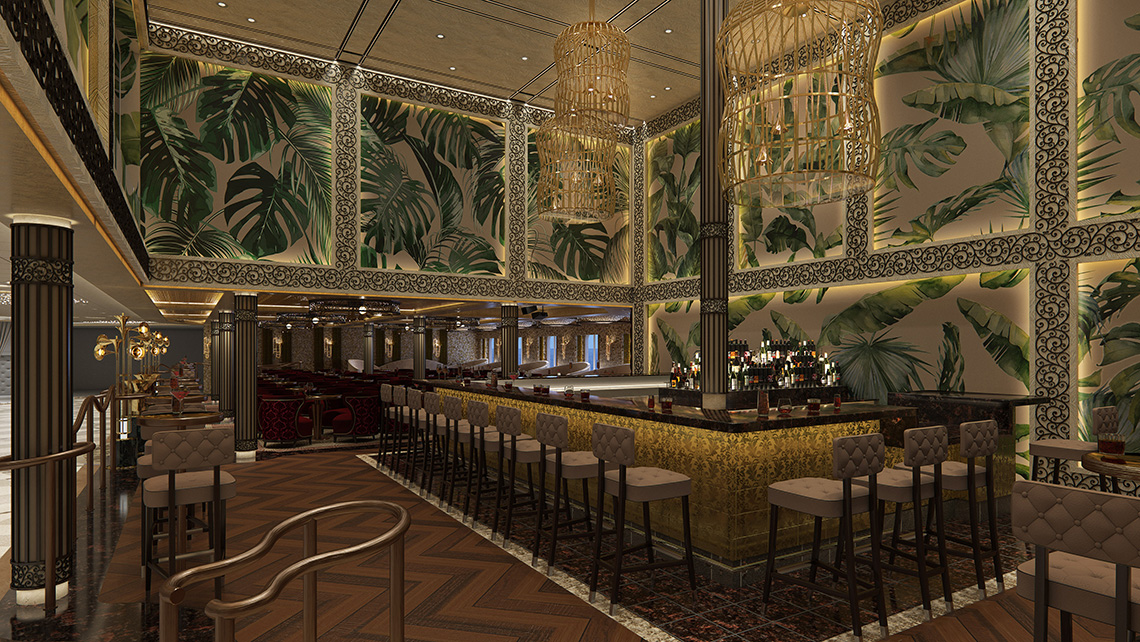 The jazz club in the French Quarter on Deck 6 will feature live entertainment and handcrafted drinks.

Another venue that’s getting a new location is Guy’s Burger Joint, which is right off the main pool on the Vista-class ships. On the Mardi Gras it will move up a deck and be grouped with the Club 02 and Circle C kids areas. The BlueIguana Cantina will remain by the pool for food service.

“On Vista, it’s in the corner of the main pool deck, and we do have a dedicated, theme-designed seating area, but in that case it’s part of the pool area,” Aprile said. “There’s a lot of traffic, so splitting things up just helps us with the dispersal.”

Aprile said the novel atrium on the Mardi Gras was also designed in part with people flow in mind. The atrium is oriented toward a large, three-deck window-wall on the starboard side of the ship.

“I don’t think it’s ever been done before where you have a space of this size on the side of a ship,” Aprile said. While affording incredible ocean views, the setup also allows for a pass-through on the port side.

“You can have big events, different things happening, but then you have the circulation that kind of circumvents the atrium if you don’t want to be a part of that,” Aprile said.

Carnival has reworked the concept of the Havana-themed cabins on the Mardi Gras, moving them from the aft to the forward part of the ship and deleting the aft pool and hot tub patio seen on the Vista-class vessels.

Now, a narrow promenade deck, or lanai, encircles the front half of the ship, coming to dead ends at a restaurant on one side and at the atrium on the other, which provides a built-in barrier to entry to the private Cabana enclave.

“So you don’t necessarily have to close a gate to stop foot traffic from getting to it,” Aprile noted. “The interruption between the aft part of the lanai and the forward part will be the atrium.”

Another area getting prime space on the Mardi Gras will be Guy’s Pig & Anchor Smokehouse/Brewhouse, which has been steadily evolving into a grander concept on recent newbuilds.

The restaurant/brewery gets the real estate previously given to the Havana Cabana at Deck 8 aft rather than being squeezed into a somewhat narrow interior space off the photo gallery.

“It’s certainly very popular,” Aprile said. “We want to make sure we have adequate space there, particularly during lunchtime. The general idea is we don’t want everyone eating breakfast and lunch upstairs.”

Aprile said guests may also notice that there are more ways to get between decks on the Mardi Gras than on the Vista-class ships.

“There are a lot of places where we’ve added staircases on [Decks] 6, 7 and 8 to interconnect them,” he said. “Not just in the atrium but also in different areas so there’s a lot of connectivity between the spaces.”

Correction: The Mardi Gras is in Carnival’s XL class of ships.

Fun without sun drives travelers to path of total eclipse