The Carnival Vista, four years in the making, is
distinguished by a number of new features that seem so right on a cruise ship,
you wonder why no one thought of them before.

At least three stand out in my mind as concepts that work
intuitively to enhance a cruise.

The one that will send a lot of photos out onto social networks
is SkyRide, the recumbent bicycle that riders propel beneath an 800-foot-long
track suspended 150 feet above the waterline.

SkyRide is just fun, the heart of the Carnival brand
promise. It lasts about 90 seconds at normal pace and riders can reach speeds
of 18 miles an hour if they pedal hard. 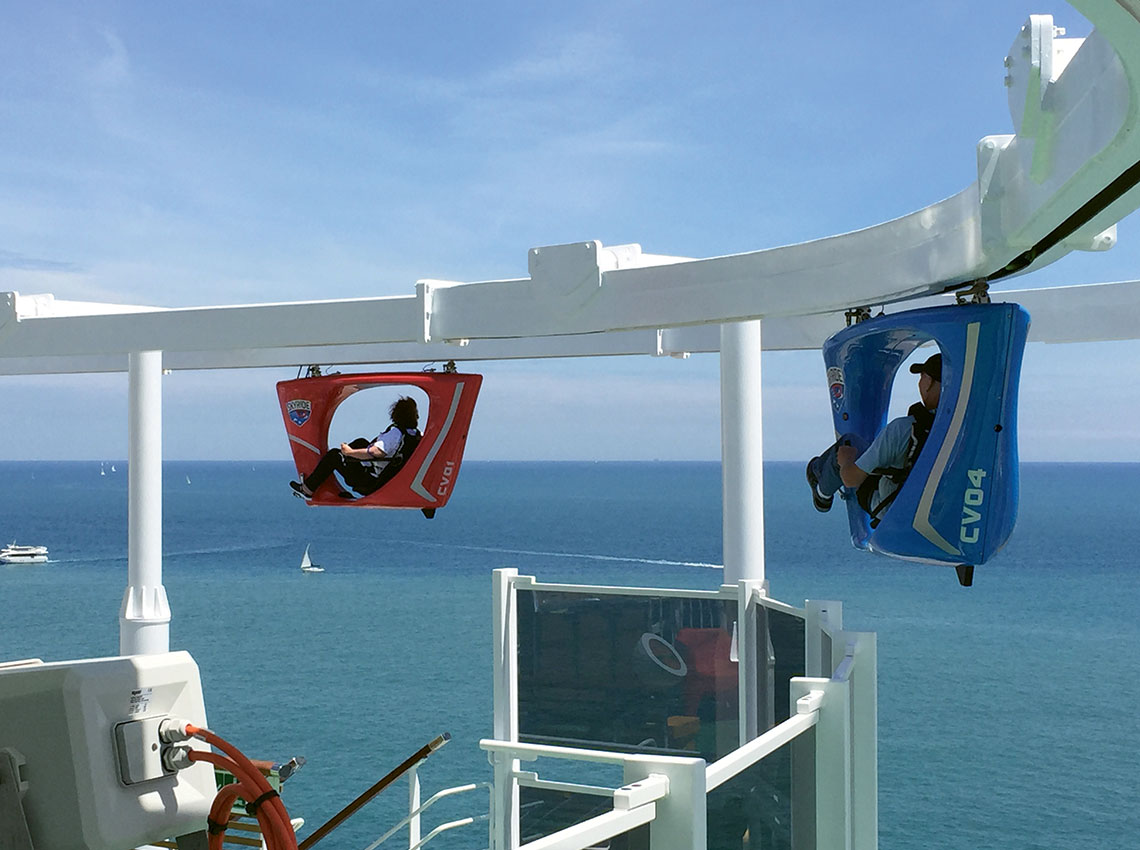 The dual track on SkyRide allows for companions to cycle together or friends to race the 800-foot circuit. Photo Credit: Tom Stieghorst

“It was excellent,” said Spencer Clarke, a film producer
and director from Los Angeles who tried SkyRide on a recent cruise from
Barcelona. “I liked the fact that it gave you a little bit of that weightless
feeling as you come down that incline,” he said.

Although its appeal to kids is obvious, Carnival said its
oldest rider on a recent cruise was 87.

Wait times on a recent cruise peaked at 35-40 minutes,
but that may grow as more children board during the summer months.

Then there is the Family Harbor: a class of cabins
grouped around a key-carded lounge for families. The concept is so functional,
it’s hard to believe no one has tried it before. 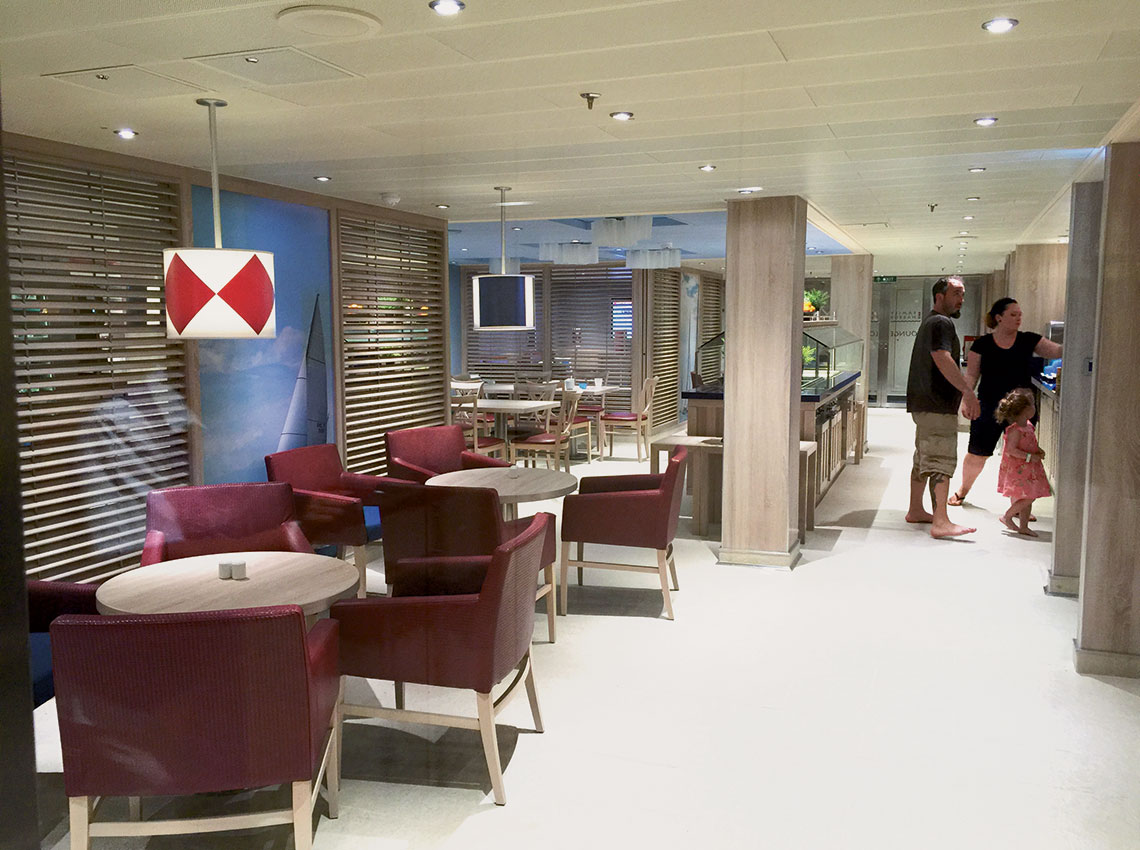 The Family Harbor Lounge is surrounded by family-friendly cabins and access is controlled by key card. Photo Credit: Tom Stieghorst

Some family cabins are designed with a bed nook and TV
that can be curtained off from the rest of the cabin, which both kids and
parents will find a cool idea for different reasons.

In addition to a unified nautical design theme, the
cabins come with perks such as free meals for kids at most specialty
restaurants and a night of free babysitting.

Alex Aguilar, of Orange County, Calif., said she expects
to use the Family Harbor Lounge two or three times a day.

“I’m genuinely excited there’s milk,” she said. “And the
fact I can just run out here and get it is great.” 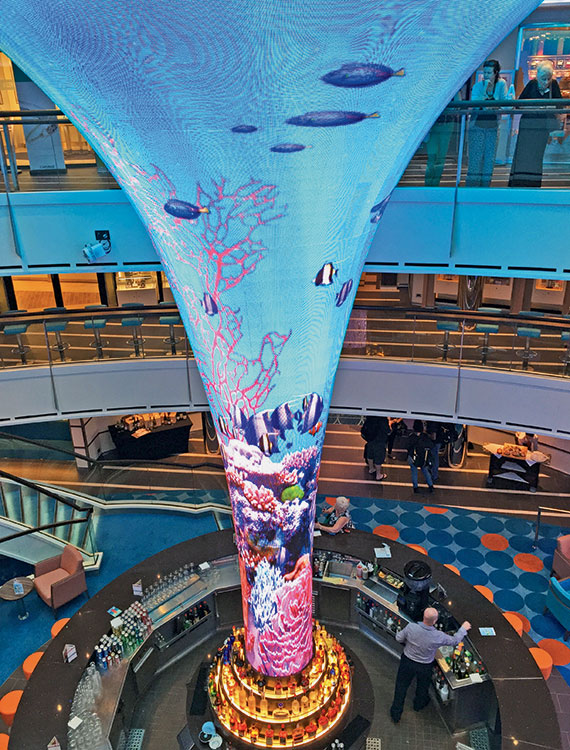 Dreamscape is a central pillar in the atrium that projects moving images through LED technology. Photo Credit: Tom Stieghorst

Bringing IMAX to sea also seems a no-brainer, if a little
complicated to execute. Carnival has taken a three-deck space in the interior
to put 178 raked seats in front of the enormous IMAX screen.

To install the screen without damage, IMAX had to roll it
up and thread it through a three foot hole in the side of the theater.

Programming includes documentaries ($5.50), and 3-D
family features and current Hollywood blockbusters ($12.95), which by the third
quarter will be delivered digitally by satellite at the same time that they
open in 1,100 IMAX land theaters.

The Vista has other innovations that merit high grades.
Visitors gawk at Dreamscape, a multi-story mushroom-shaped pillar that is
programmed with ever-changing images crafted in LED lights.

The Vista’s photo gallery is the first end-to-end digital
gallery on Carnival. Photos display on a video wall and are available for
purchase on a guest’s hand-held device through the Carnival Hub app. 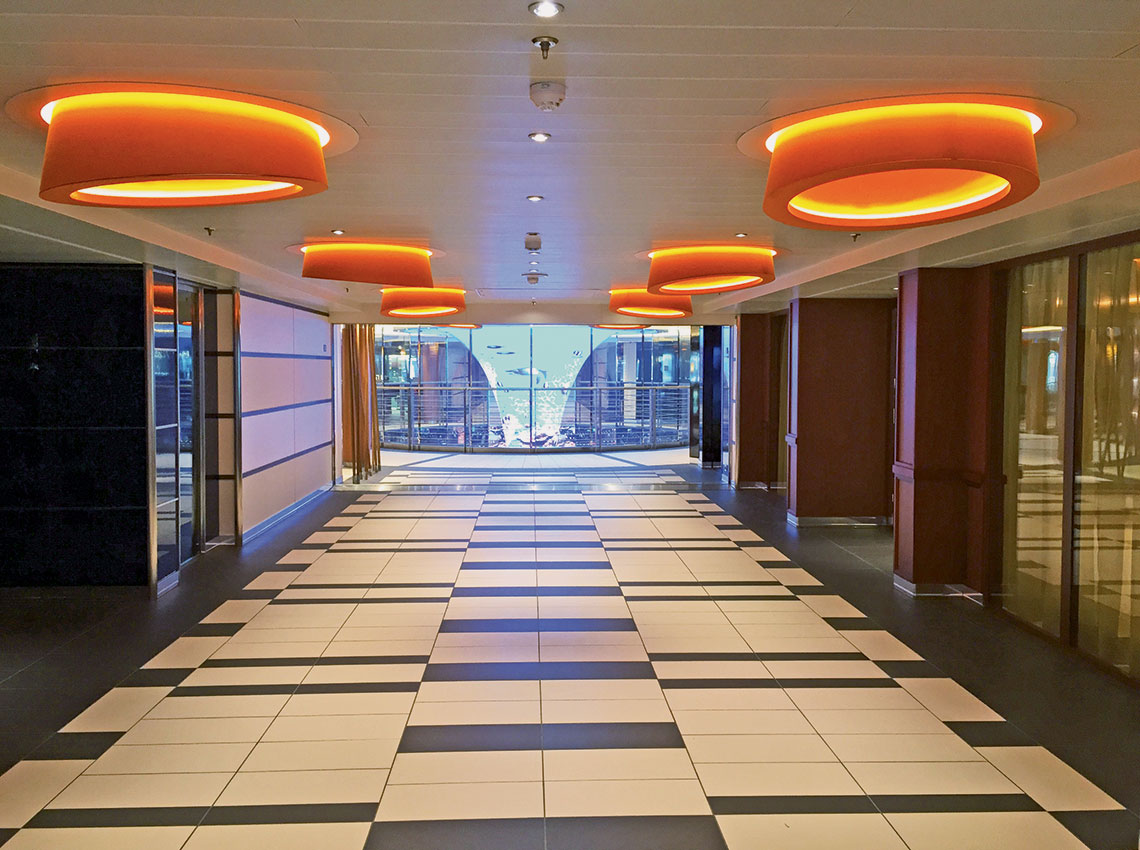 Light fixtures that look like rocket nozzles are part of the design scheme for Carnival Vista. Photo Credit: Tom Stieghorst

Another winning space on the ship is the Cuban-themed
complex on Deck 5 aft. Havana Bar has been upgraded from the Carnival Sunshine
to have more seating, a better bandstand/dance floor, and better theming,
including dominos tables and a colonial map of Cuba on the wall.

It extends outdoor to an aft pool area, and is surrounded
by Cuban-themed cabins and suites. The latter come with open air patios that
connect via a deck walk to the pool. The whole outdoor area is private to
Havana cabin guests from 6 am to 5 pm, giving it a club atmosphere.

I didn’t catch all of the entertainment, but more than
ever before Carnival is taking musicians and dispatching them to parts of the
ship you don’t expect to see them in. Examples include a strolling accordion
player and a New Orleans jazz trio stationed at the entrance to one of the main
dining rooms. 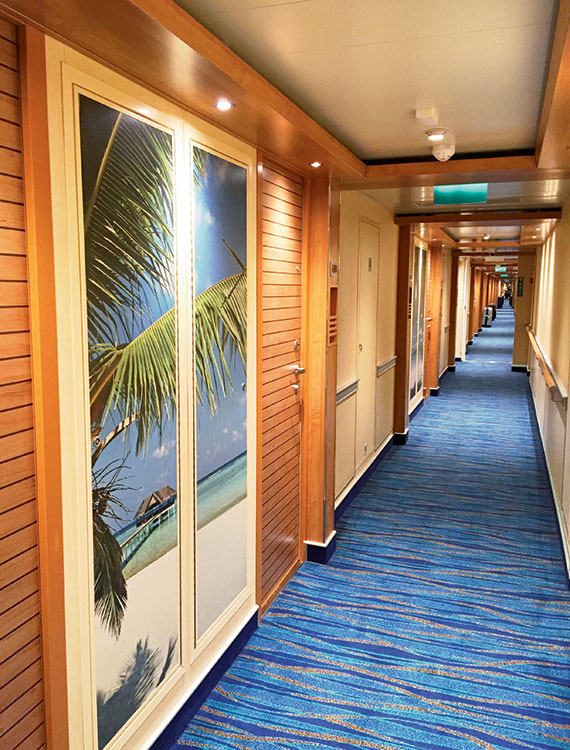 For my money, the Vista’s design is the most elegant ever
for a Carnival ship. I particularly liked the orange light fixtures that look
like rocket nozzles and give the ship a lot of visual thrust.

Another neat trick is the use of floor to ceiling photo
panels in the stateroom corridors, which make the cabin doors almost disappear
and keep the corridors from being visual dead zones.

A few things about the Vista were disappointing,
puzzling, or didn’t work.

Not building USB charging outlets next to the beds is a
missed opportunity on any new cruise ship. The Vista doesn’t have them.

There are odd changes of elevation of an inch or two in
some stateroom corridors that could catch walkers by surprise.

An eye-catching hammock in the renderings of the Havana
Cabana suite patio has turned into a swing chair because there wasn’t adequate
space for a full-body hammock, Carnival officials said. 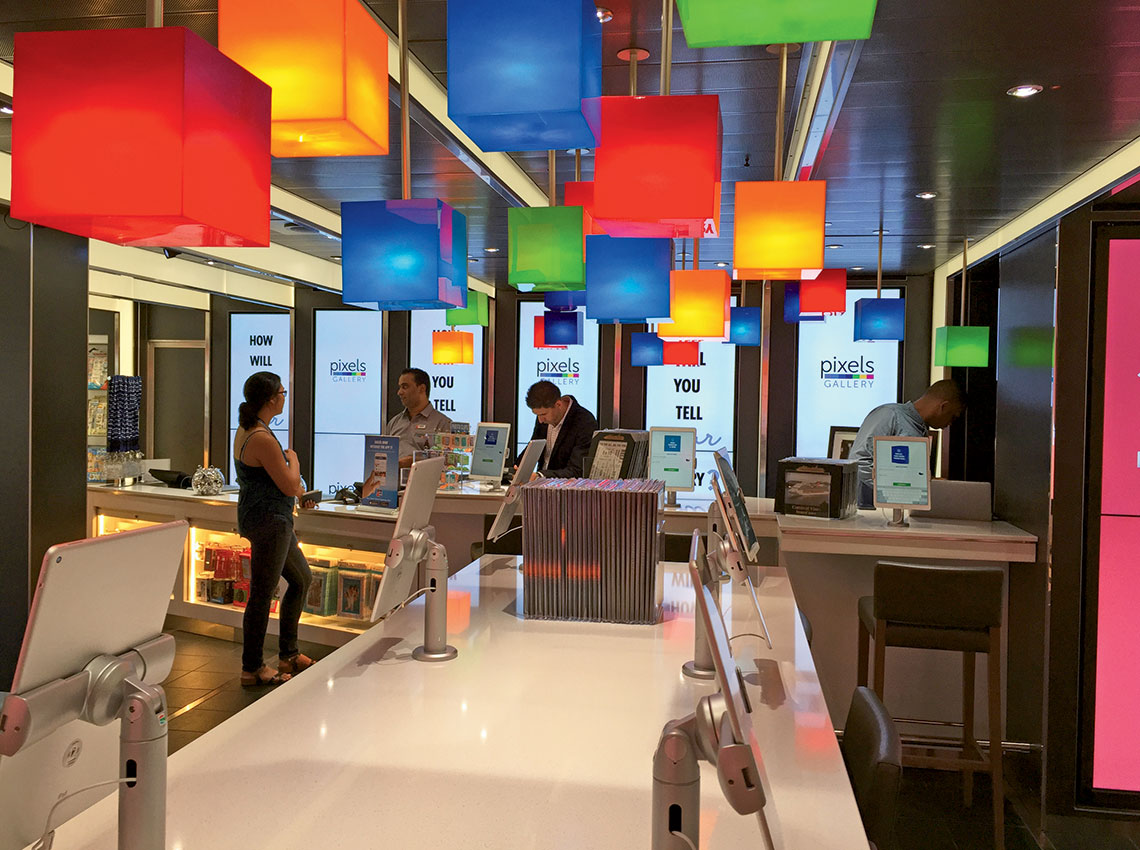 The otherwise appealing Lido Marketplace buffet can feel
overcrowded at breakfast, and the excursion staging areas at times are
overwhelmed, resulting in long lines.

The new a la carte Seafood Shack seemed expensive to me,
compared to the great value Carnival delivers in other specialty restaurants,
and I wasn’t bowled over by a lobster roll I had there.

Robin Reed, a property manager from the Bronx who was
dining on the $6 fish and chips, said they were fine, but that snow crab legs a
companion ordered “weren’t really seasoned.”

“The prices are not bad compared to what you get
someplace else,” Reed said.

There were a few things I didn’t get to try but that
sounded intriguing: “Clue,” a murder mystery game, and “Lights. Camera.
Interaction,” described as “Movie-oke” in which passengers re-enact scenes from
famous movies.

Carnival Horizon a ‘Vista Sista’ but with notable differences