SAINT-NAZAIRE, France — Six weeks before the first new
Celebrity Cruises ship in a decade is set to be delivered, Royal Caribbean
Cruises Ltd. chairman Richard Fain showed off that ship, the Celebrity Edge, at
the shipyard here, where it is nearing completion.

On a tour for top agents and journalists, Fain said curved
shapes and asymmetry are the signature design features that will set the Edge
apart from the pack.

Those design touches were evident in the Grand Plaza, an
atrium-like space that is meant to be the hub that ties the ship together.

“It’s a big space where everyone will gather and be
together,” Fain said.

The space is dominated by an enormous, modern chandelier
over a bar that anchors the plaza.

The oblong plaza is several decks high, and the ceiling is
supported by exposed, white steel beams with rounded edges.

The Magic Carpet platform is the most iconic feature on Celebrity Edge. Photo Credit: Tom Stieghorst

“It’s so different than what people usually try to do,
which is you try to hide it,” Fain said of the structural elements.

Of the steel, Grand Plaza designer Patrick Jouin said, “We
saw it was so strong and so beautiful [that] we wanted to show it. I love
steel, and I love the raw material.”

Fain also praised a staircase that Jouin designed as being “extraordinary”
for its asymmetrical spiral.

“We wanted [guests] to have pleasure using the stairs,”
Jouin said. “We want them to be so beautiful you don’t even think about
it. We want to mesmerize you.”

Fain said designers also worked to improve the elevators. A
key improvement: doors close and open faster, which Fain said yields a
surprising time savings. “It’s like having another elevator bank,” in
terms of efficiency, he said.

Complimentary dining will be offered in four restaurants,
including the Normandie, named for the 1930s French liner also built in
Saint-Nazaire. Wall panels from the liner that had been on the Celebrity Summit
are being reinstalled on the Edge, Fain said.

In the Cosmopolitan restaurant, Fain showed off a curved,
rib-like pillar that he said embodies the design flair the Edge will provide.

The vessel will also bring design to an area where it has
never been emphasized: the ship’s lifeboat tenders. They have more windows to
provide a view, wood interior trim and upholstered bucket seats rather than
benches. Although they cost twice as much as the tenders for Celebrity’s
Solstice class, travel agents marveled at their panache. 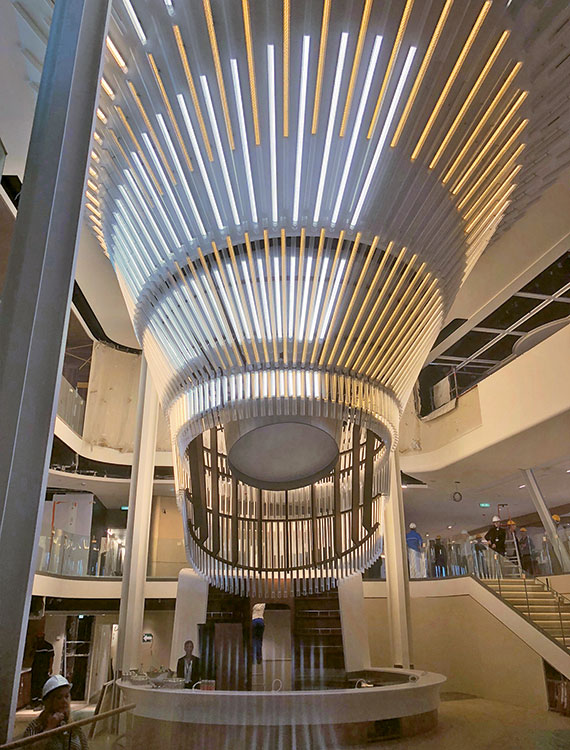 “I’ve never been on a yard tour before where they’ve
shown off the lifeboats,” said Van Anderson, co-founder of Avoya Travel.

Another distinctive touch are the 14-foot, floor-to-ceiling
windows that line the buffet restaurant. Fain said care had been taken to add
extra height wherever possible in the public spaces and cabins of the Edge.

The tour ended with an outdoor lunch on the ship’s most
iconic feature, the Magic Carpet, a 9-ton, movable platform that is
cantilevered on the side of the ship. It offered a spectacular view of the
shipyard from Deck 14.

Fain said he had dined there on Sept. 12, having just
disembarked from a flight from the U.S.

“I was hot, I was tired, but when I walked on and saw
it, I had goose bumps all over my arms,” he said.