ONBOARD THE CELEBRITY EDGE — With the launch of the
Celebrity Edge, Celebrity Cruises continues its march into the type of
hospitality product offered by upscale, urban boutique hotels, the kinds most
often found in New York and Los Angeles.

The Edge has the hallmarks of the hip, non-institutional
hotel: that idiosyncratic feel, a trendy yet elegant design and an emphasis on
gastronomy.

At 2,918 passengers, it can’t claim the intimacy of smaller
ships that could be considered boutique. But in an era when 6,000-passenger
ships are on the horizon, the Edge can be categorized as a midsize vessel.

The Celebrity Edge’s cantilevered Magic Carpet on its starboard side exemplifies the ship’s asymmetrical design.

The ship’s interior designers delivered an onboard
environment where the main color is taupe and yet somehow manages to be
anything but boring.

The Edge also employs the kind of innovative technology and
novelty so characteristic of Royal Caribbean Cruises Ltd. chairman and CEO
Richard Fain. Two of the Edge’s signature features, the Magic Carpet platform
and the balcony-inside-the-room Infinite Veranda, are truly original and so
organic to the structure of the ship that they won’t be easily copied.

Of the two, I was most impressed with the Magic Carpet. It
is both a marketing attraction that differentiates the Edge from every other
ship at sea and improbably practical. In its position on Deck 3 as a
tender-boarding platform, in combination with the redesigned Destination
Gateway, it is a shore excursion portal like no other. While sailing, it’s a
93-ton dining venue that hangs over the ship’s side and moves to several
different decks.

Two other features deserve to be singled out. The multistory
Eden restaurant/lounge/bar at the rear of the ship is an iteration of the space
created for Royal Caribbean as Two70 in the back of the Quantum of the Seas.

But Eden is so artfully done, with so many intriguing
levels, nooks and fun spaces, all connected by a daring spiral ramp, that it’s
a tour de force that has to be experienced to be appreciated. 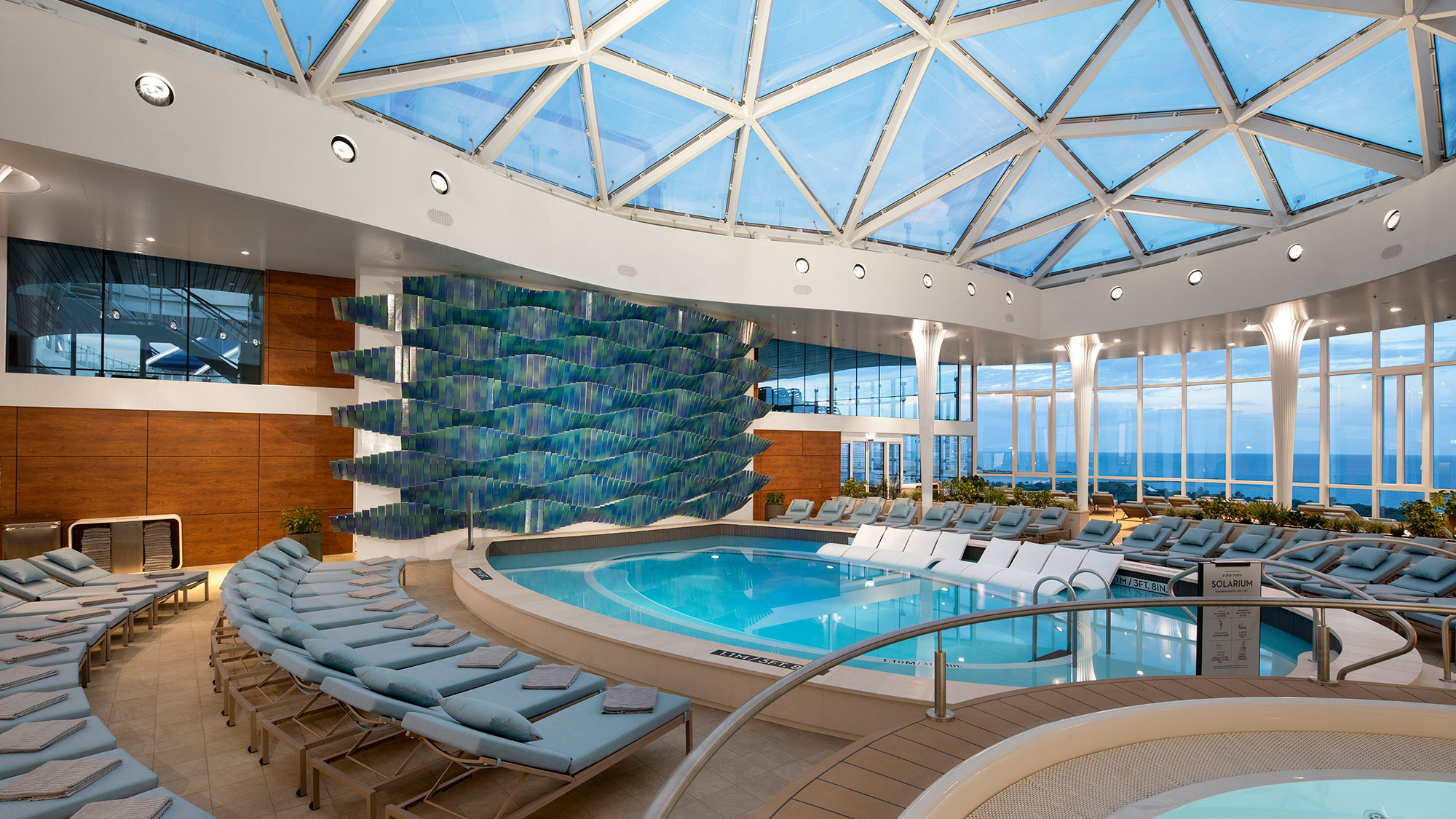 The ship’s adults-only Solarium features three-dimensional art that represents the colors and movement of the ocean.

The Le Petit Chef animated dinner experience is delightful,
at least the little bit I got to see in a demonstration. The 72-seat Le Grand
Bistro was booked solid on my two-night preview cruise. I imagine the demand
for this will exceed supply, even at $55 per diner.

Travel agents on the cruise liked several things in
particular about the Edge, starting with the serenity of the design.

“Spa at sea,” was the description that came to
mind for Vanessa Cohen, an agent for Protravel International in Miami. She said
the suite-centric Retreat area was a personal favorite. “‘Retreat’ is a good label for the whole ship,”
she said. “It’s so elegant and spa-like.”

The corridors on the Edge are trimmed in a soothing gray
that suggests bleached wood. Carpets are gray with a cross-hatch pattern in
cranberry. The ship makes great use of neutral colors, with occasional splashes
of jewel tones for accents.

“Everything blends together so nicely,” said Marni
Becker, senior director of cruise sales for Travel Leaders’ luxury brands,
which include Protravel and Tzell. Becker said the features make the ship “an
easy sell.”

In particular, she said, the six duplex Edge Suites were “gorgeous.
I could sit out on that balcony all day long.”

Part of the reason the Edge triggers a relaxation response
is the height of the ceilings, which have been raised throughout the ship by
more thoroughly engineering the area between decks to eliminate wasted space. 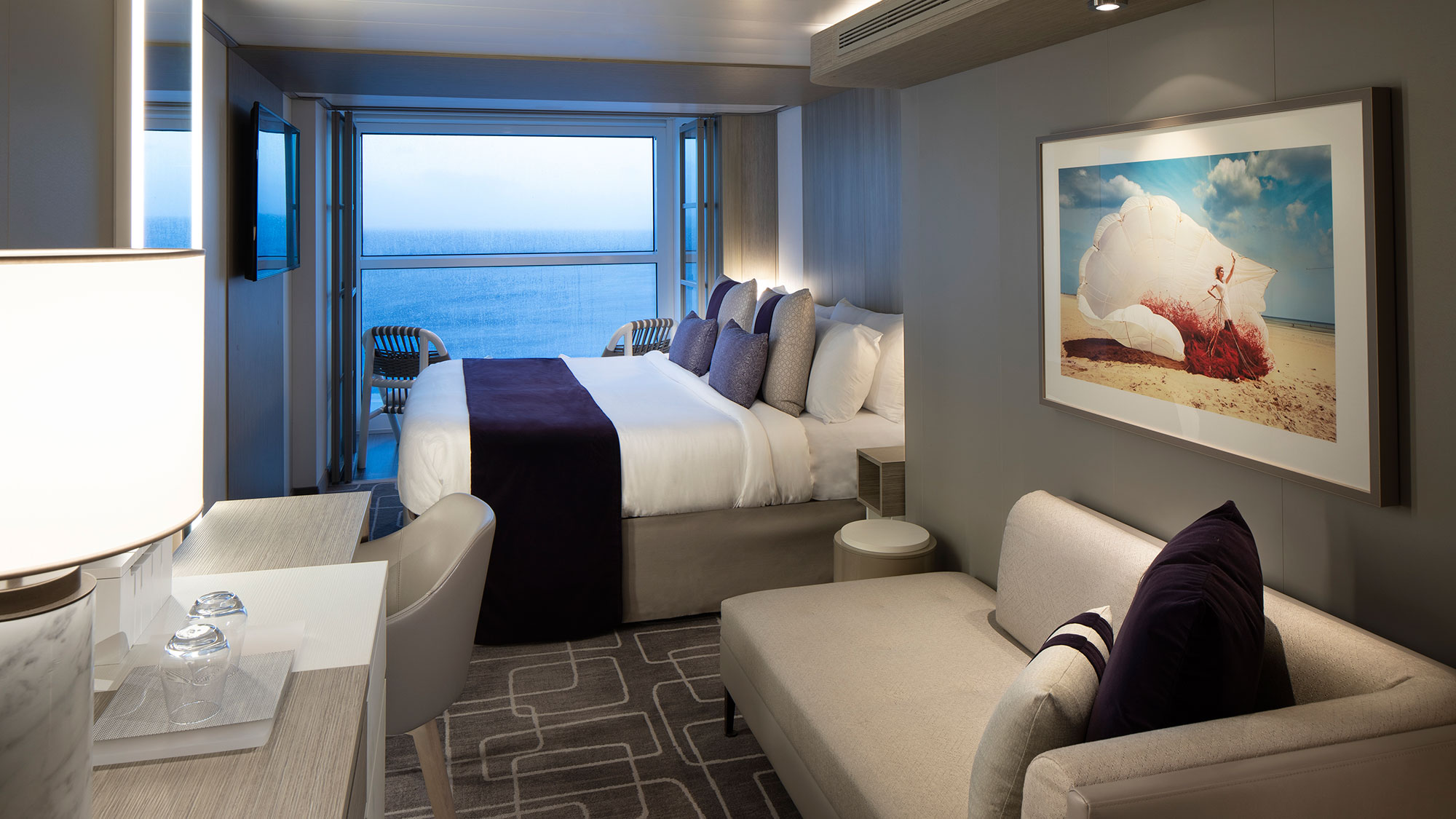 The Infinite Veranda converts floor-to-ceiling windows into balconies at the touch of a button.

“Light-filled,” “transparent” and “weightless”
were some of the adjectives that popped into my head in the adults-only
Solarium pool area.

The main pool is different on a number of levels, starting
with its 25-yard length that makes it practical for swimming laps. Although
some loungers face the pool, just as many face outward, where tall, glass
panels afford views of the sea.

A jogging track is carried on arches along one side, making
for a more interesting and less obstacle-filled course than on most ships. Six
double-height, wood-paneled cabanas face the ocean on the other side of the
asymmetrical design.

There is a modern baroque asymmetry to much of the ship that
playfully subverts the expected forms. Ceiling alcoves are imbalanced
trapezoids with curved corners. Stair treads have gentle angles in unusual
places.

But the result never feels queasy or off-kilter. The
three-story Grand Plaza atrium is a masterpiece of irregular but harmonious
design.

A concept that works better on the Edge than it did on the
ships of sister company Royal Caribbean International is splitting the main
dining room into four sub-restaurants. The Cosmopolitan, Normandie, Tuscan and
Cypress feature American, French, Italian and Mediterranean specialties,
respectively, with some menu items common to all. It seems better organized
here than the early Royal attempts.

If there’s one feature that didn’t totally convince me it
was the Infinite Veranda, which incorporates the balcony space into the cabin
with a power window that can be lowered to make it function as a balcony. On the one hand, it brings the sea right to the edge of the
cabin.

“It’s like you’re on the ocean,” said Cheryl
Scavron, a Dream Vacations/Cruise One franchisee in Pompano Beach, Fla. 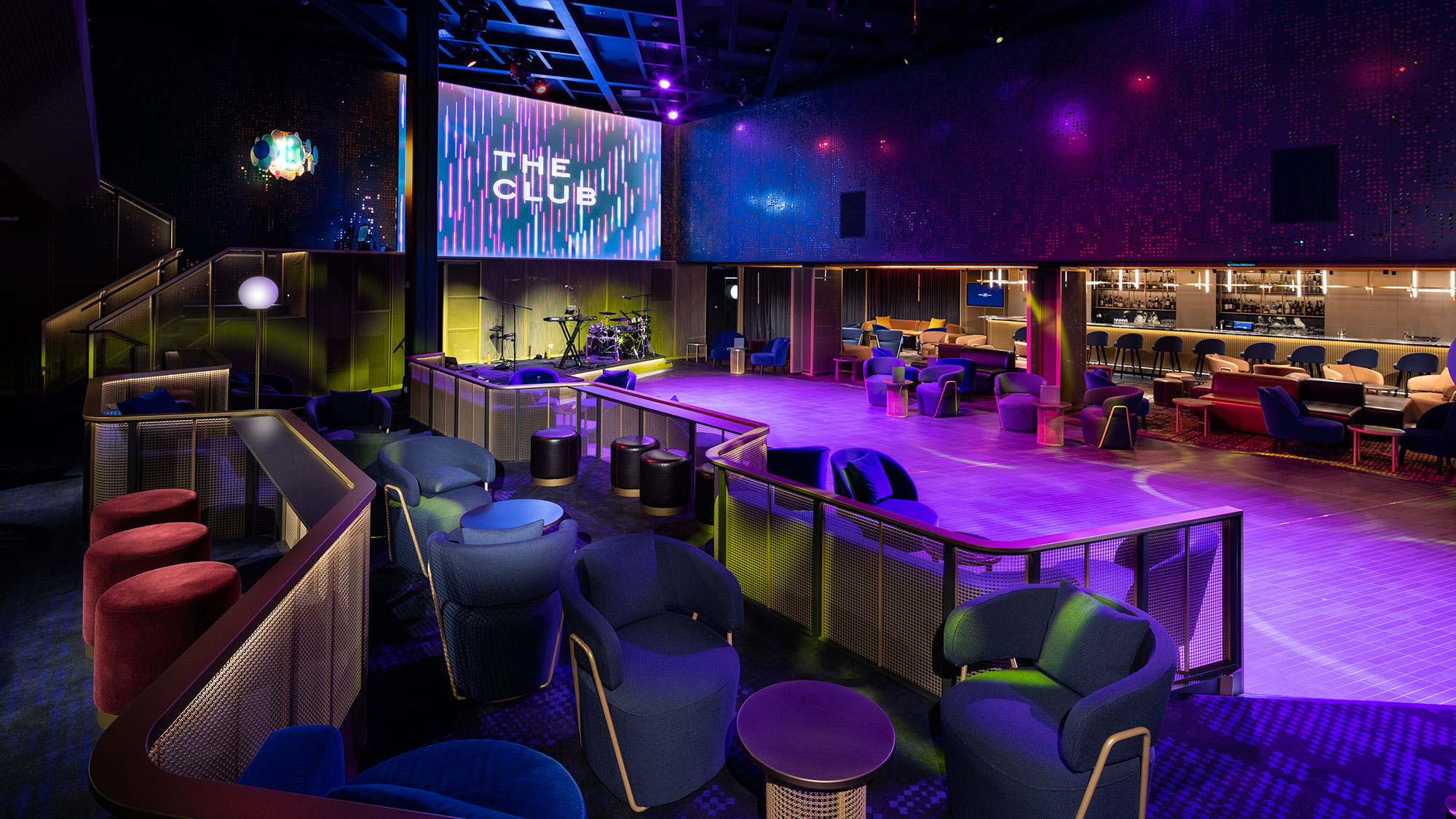 The Club on Celebrity Edge is a multi-purpose space.

At 202 square feet, with 42 square feet of veranda, it is
also 23% larger than comparable cabins on Celebrity’s Solstice-class ships.

But to me, the cabin felt narrow, an optical effect created
by lengthening it without widening it. And I found it a bit odd to have patio
furniture in the stateroom.

Another nit I heard was that the performers in the Eden
restaurant might not be for everyone. I did not see them, but they were
described to me by two travel agents as “a little over the top” and “definitely
different.” I got the feeling they were trying to say “weird”
without being impolite.