Celebrity Cruises lifted the veil from its much-awaited Edge
class of ships, the first new design for the premium brand since the Solstice
class was created in 2006.

While not all of the features were revealed, media and key
trade partners were briefed on the ship’s accommodations and some high-profile
amenities that will surely be among the most talked about innovations.

High on that list is the Magic Carpet, a traveling platform
capable of seating 90 guests for dinner that will be cantilevered off the side of
the ship and move between decks.

The two-level Edge Villas feature an atrium stairway with terrace views and a 3-foot-deep plunge pool.

The 90-ton covered platform, about the dimensions of a
tennis court, will change function depending on which deck it docks. The uses
range from a specialty restaurant to an extension of the pool deck to a loading
dock for tender operations.

Magic Carpet is one element of an overall theme of bringing
guests in closer contact with the sea, said Richard Fain, chairman of RCCL, Celebrity’s
parent company.

“The closer connection to the sea is quite important,”
Fain said.

To foster that, Edge will have a unique design to some of
its balcony cabins, which will be marketed as the Infinite Veranda. The fixed
partition of steel and glass between the cabin and the balcony has been
scrapped in favor of a thin, folding screen of glass, allowing the balcony to
be incorporated into the cabin when the screen is open. 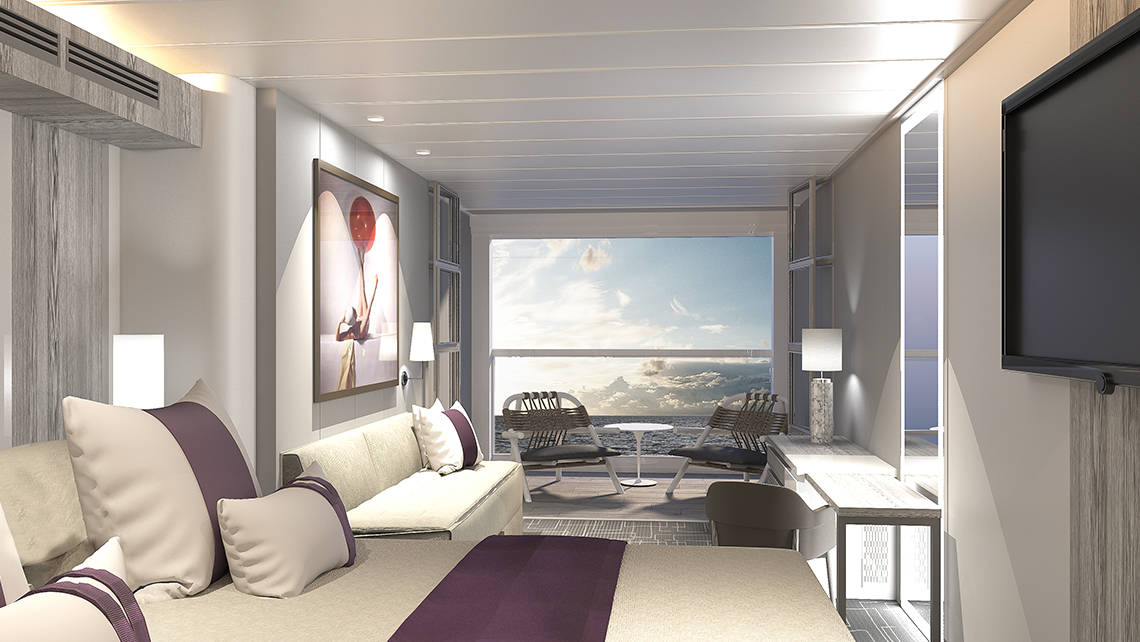 The Infinite Veranda turns guest quarters into a seamless space — from the room’s door all the way to the water’s edge.

At the cabin’s edge, there is a glass half-height panel, and
a second glass panel that descends at the push of a button to meet it from the
ceiling. When that panel retracts, the whole cabin can be opened to the air.

If the veranda window is down and it starts to rain, “the
bridge has the ability to close the window,” Celebrity CEO Lisa
Lutoff-Perlo said.

Fain said the 918 Infinite Veranda cabins will be 226 square
feet without the balcony space and 269 square feet with it, compared with an
industry average of 172 to 183 square feet. 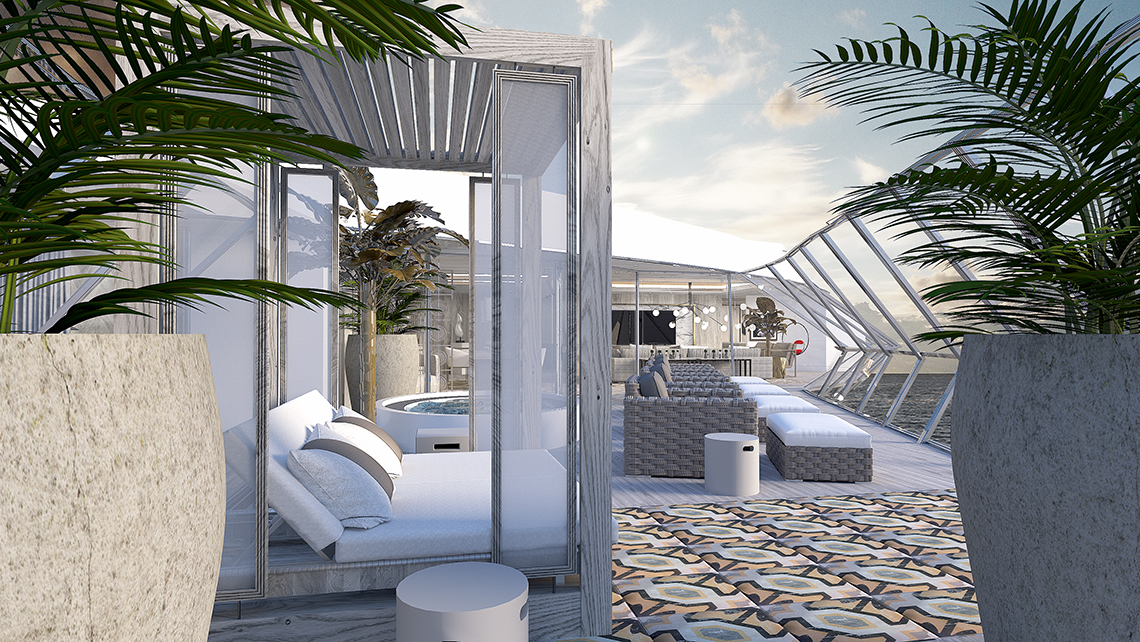 The veranda of the Iconic Suite sits above the wing of the bridge, complete with a Jacuzzi and sun chairs.

Suites will expand from 5% of capacity on the Solstice-class
ships to 12% on Edge, Lutoff-Perlo said. There will be two Iconic suites of
about 2,500 square feet perched atop the bridge with 700-square-foot balconies.
They will have two bedrooms and two baths, and each can be combined with a
Royal suite to form a larger accommodation.

The Celebrity Edge, which will be delivered in December
2018, and its sister Celebrity Beyond (due in 2020) will have a pair of two-bedroom,
two-bath Penthouse suites and six duplex Edge villas. There will also be 146
Sky suites, all with conventional balcony doors.

Suite guests will have exclusive access to a sundeck called
The Retreat with a private pool, a separate lounge and butler service, as well
as to the Luminae restaurant available only for suite guests, as on other
Celebrity ships. 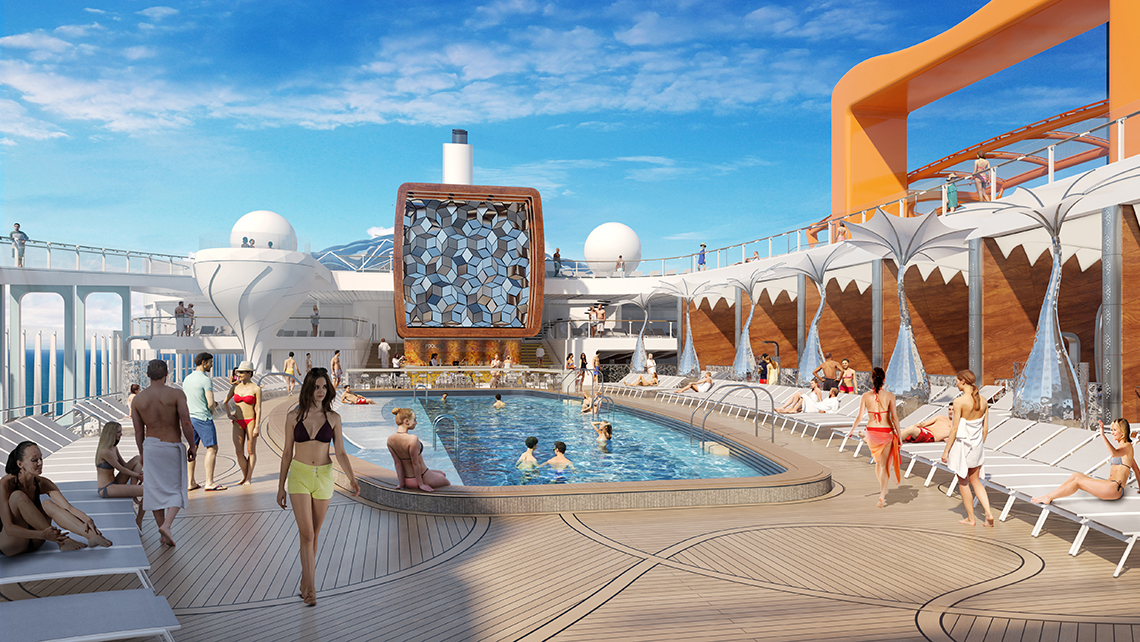 The pool deck, which was also previewed, will debut the
industry’s first two-story jogging track and an asymmetrical design in which
many pool loungers are positioned outward to face the sea, rather than inward
at the pool. There will be six rentable cabanas with 20-foot ceilings and
tulip-shaped hot tubs that will be elevated on stems.

A Rooftop Garden with tree-like sculptures will occupy the
aft pool deck. It will be larger than the Roof Terraces on Celebrity’s
Millennium class, and about the same size as the Lawn Club on Solstice class.
It will have a grill comparable to the Lawn Club Grill and show movies like the
Rooftop Terrace. 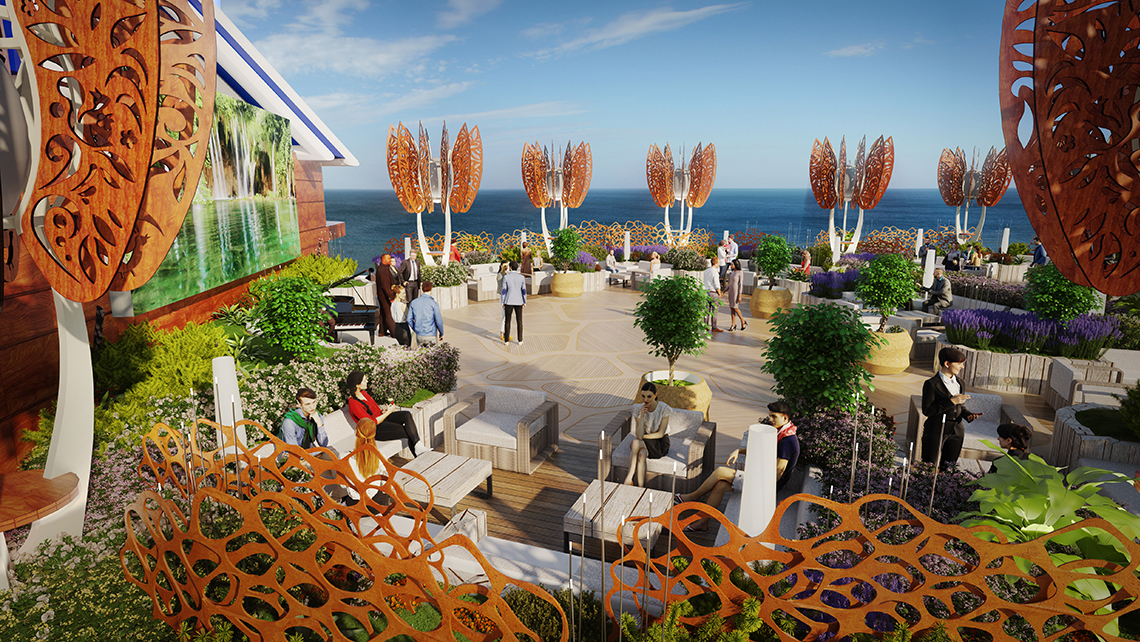 Celebrity described the Rooftop Garden as a “one-of-a-kind space, like a hidden park in a bustling resort.”

Another advance for the Edge class will be a revision of the
shore excursion tendering experience, which will use Magic Carpet as its
centerpiece. Guests will access Magic Carpet through a Destination Gateway, an
embarkation station that will show destination highlights on large LCD screens.

The lifeboat tenders will be recast as Edge Launches with a
more stylish design, although Celebrity wasn’t ready to reveal details. When
not being used for excursions, the Destination Gateway will be a learning and
activities center, featuring enrichment talks, conferences, trunk shows,
shopping events and art auctions.

The Celebrity Edge will also roll out a refined portfolio of
digital services, primarily relying on the guest’s smartphone for
functionality. An X-Ray Vision app will let guests “see through walls”
to remote areas of the ship such as the bridge, the galley or the engine room. 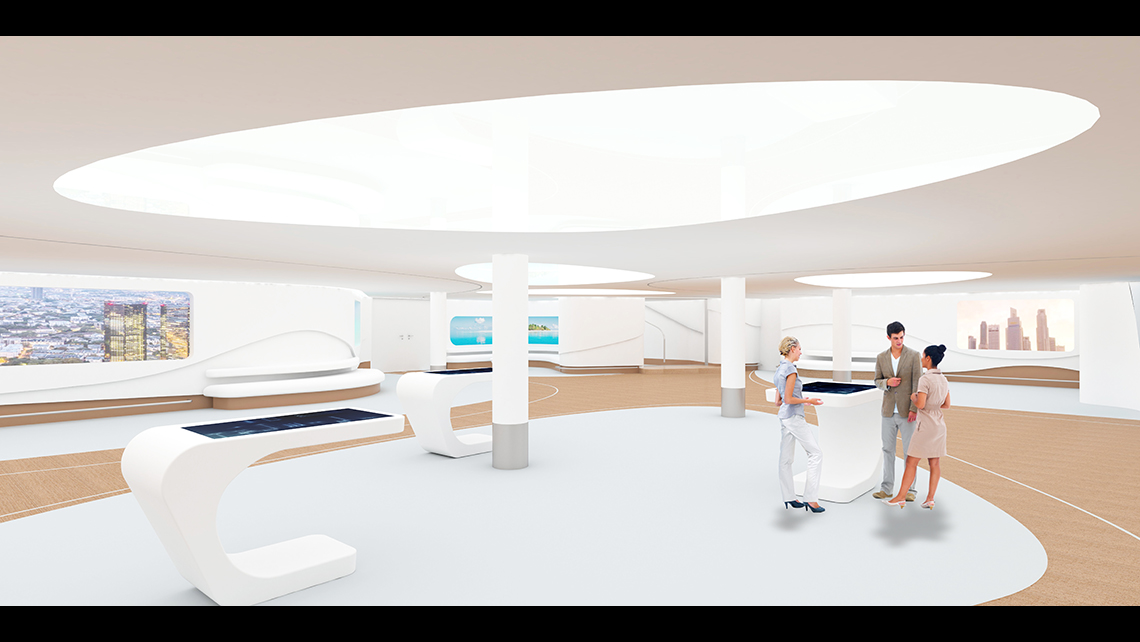 Destination Gateway will be an embarkation station for excursions and a learning and activities center.

The digital improvements will be on 15% of the combined RCCL
fleet by year’s end and about 50% by the end of 2018, Fain said.

He said one of the most visible changes with the Edge class
will be the exterior look created by the Infinite Veranda, which eliminates the
egg crate appearance of many balcony-rich ships. “When you look back on
the ship, the wall is now a flat wall,” Fain said. “It will give you
a much calmer look.”

Singapore Tourism to launch a virtual taxi ride around the country