I recently had a chance to visit two of the Caribbean destinations developed at least in part by Royal Caribbean Cruises Ltd. One, the Haitian private port of call of Labadee, exceeded my expectations. The other, in Falmouth, Jamaica, did not.

Both are big enough to accommodate the largest cruise ships in the world: Royal Caribbean International’s Oasis class, which includes the hulking Harmony of the Seas, my transport to the two ports. Neither is devoid of interest. But for my money, Labadee is the more enjoyable of the two.

Part of it is simply a matter of time. Labadee has been around since 1986 and has had a chance to grow into itself. Its facilities don’t look like they just came out of the box, as do those at Falmouth, opened in 2011.

Labadee is situated on a peninsula perhaps a mile or so in length, with the ocean on one side and a bay on the other. Forested mountains offer a backdrop. There is a stout pier built in 2009 to accommodate the Oasis-class ships, making it easy to go back and forth between the ship and the facilities.

The giant Labadee sign is a good spot to pose for photos. Photo Credit: TW photo by Tom Stieghorst

The setting is quite attractive, more so than I expected. The bay side in particular has some beautiful, calm swimming beaches and is a natural spot for the rentable cabanas that have been installed along its shores.

There are actually three distinct beaches on the bay side, which feels nicely sheltered and different from the ocean side. The Barefoot Beach Club area includes the cabanas close to the water. At least some are reserved for the use of Suite Class guests who shell out for the top-end suites on Royal ships.

It also has the more elaborate of two spa treatment areas at Labadee. 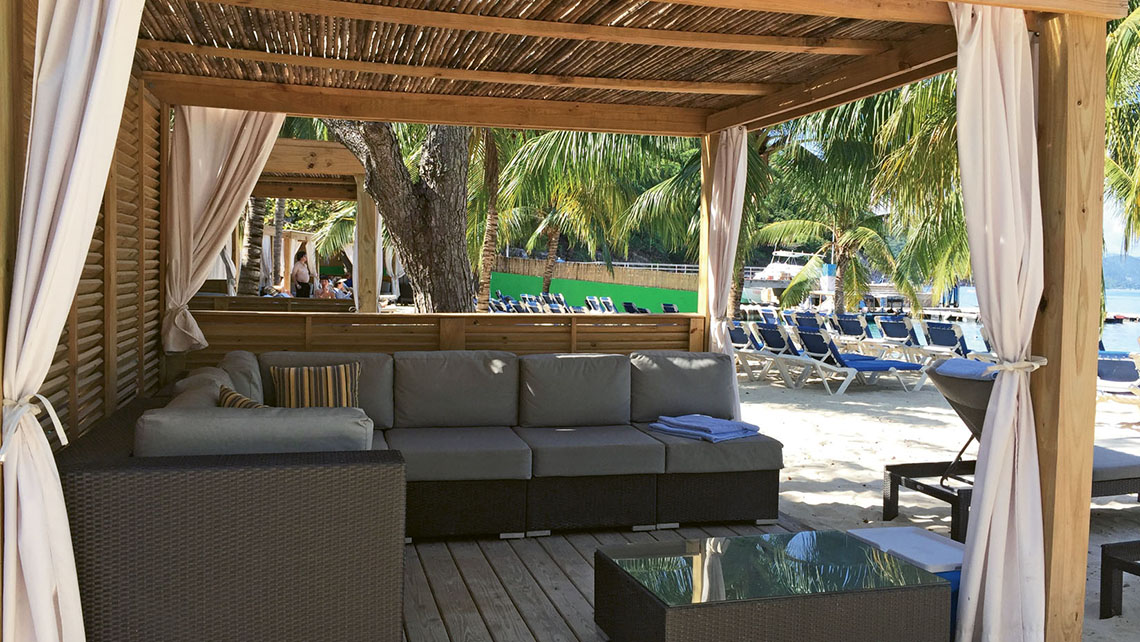 Nellie’s Beach is somewhat similar. Columbus Cove, the largest of the three beaches and the most distant from the ship, is a good spot for families. It has a collection of inflatable floating slides and rafts offshore as well as the Dragon’s Splash waterslide, a twisty, low-slung, blue metal slide that must look like it’s worth every penny of its $27.50 daily cost to kids of a certain age, if not their parents.

One could easily make a day of it at Columbus Cove alone. There is a cafe, bars, restrooms, a trading post, beach chairs and a station for the island tram.

There is also a free one-way shuttle boat from the pier.

The tram operates on a sand road that forms the spine of the island and really makes it easier to get around, especially for guests who are older, have young kids or are not very mobile. I walked the length of the place to see it, but was happy to hop the tram to go back.

One of the most pleasant parts of Labadee is that there’s lots of shade provided by mature Australian pines, coconut palms and other trees. The walk from the ship along the pier was hot on a late October morning, but the rest of it was pretty breezy.

The ocean side of Labadee is protected by a reef, so the waves broke rather gently on shore when I was there. A promontory point anchors the crescent curve that at the far end becomes Adrenaline Beach, where there is a breakwater and daybed-style cabanas. 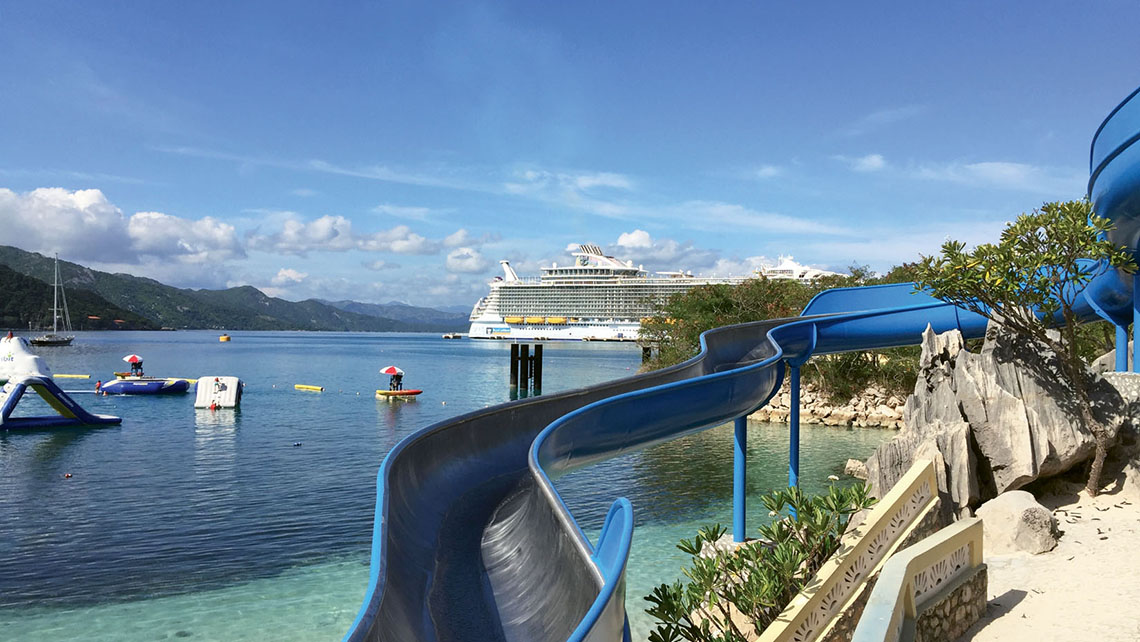 As for activities, personal watercraft, parasailing, kayaking and snorkeling are all available. There’s a nicely done splash park for little kids and volleyball for adults. The star attraction is undoubtedly the five-line, 2,600-foot-long Dragon’s Breath zipline that starts high atop an overlook and swoops over the ocean beach. It costs $95.75 per ride.

More than I bargained for at Labadee’s Artisan’s Market

I wanted to see what the Artisan’s Market was all about, but I didn’t really want to buy anything. That’s when I met my haggling match. Read More

There’s also the Dragon’s Tail, a tracked coaster with two-person sleds that curves around the side of a steep, forested hill. It costs $19.75 for a five-minute ride.

Entertainment at Labadee includes Haitian musicians and dancers. There is an extensive Artisan’s Village with native crafts of a somewhat higher caliber, I thought, than those for sale at other Caribbean ports. Be prepared for a friendly but aggressive pitch.

Falmouth a port in progress

I left Labadee wanting to spend more time there. The next stop on the Harmony’s itinerary at Falmouth left me feeling I’d seen it all in an hour. 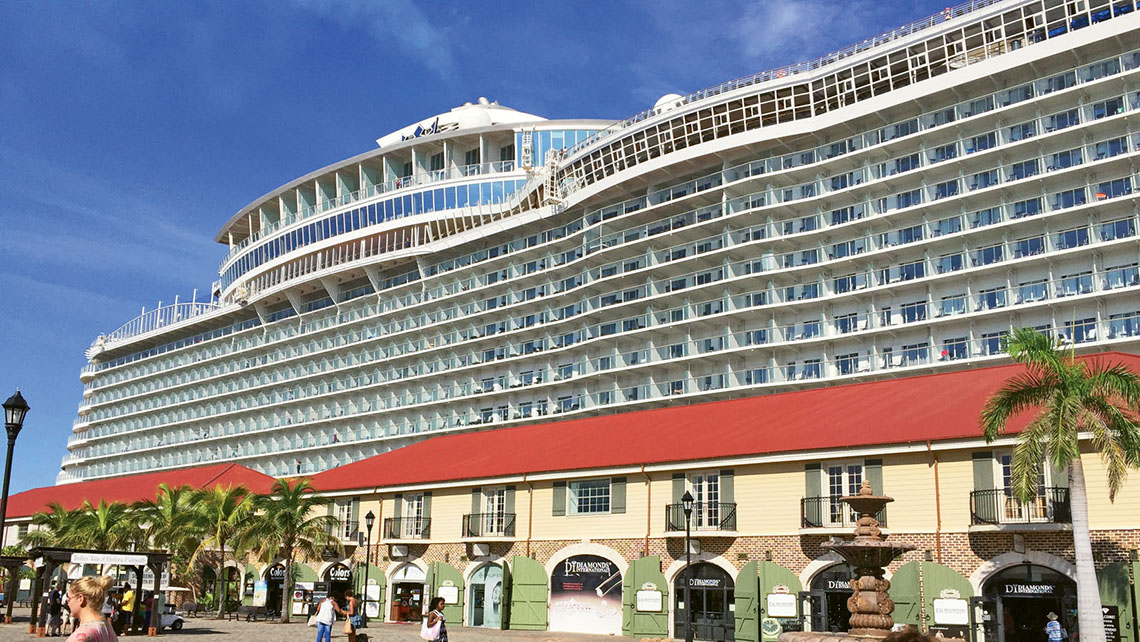 The Harmony of the Seas looms over the buildings of the shopping village at the cruise port in Falmouth, Jamaica. Photo Credit: TW photo by Tom Stieghorst

The cruise port, developed by RCCL and the Jamaican government along with some partners, is a triangle jutting into the sea with two long wharves with new shops meant to mimic Falmouth’s 18th century Georgian architecture. There’s a very healthy assortment of jewelry shops along with a large Margaritaville complex and not a lot of natural shade. 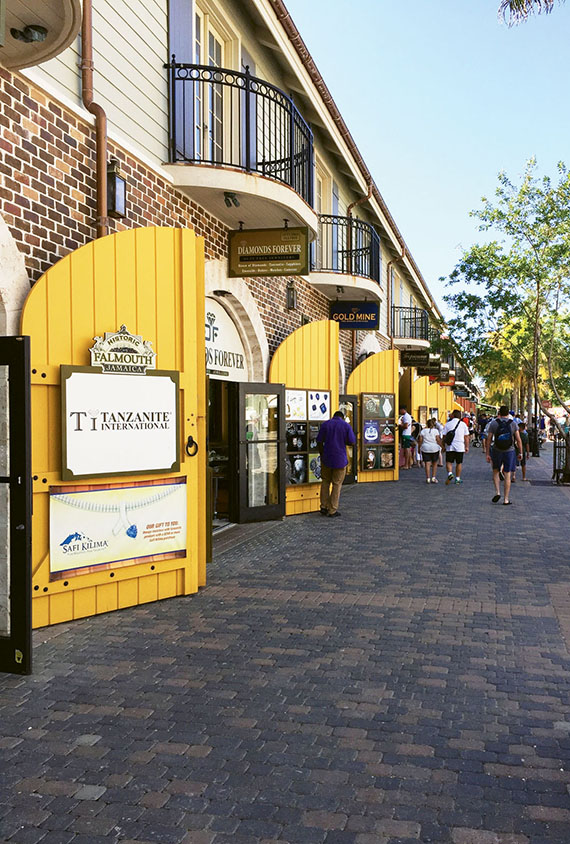 Outside the gates of the triangle lies the town of Falmouth, which boomed in the late 18th and early 19th century as a slave market and sugar depot and thereafter fell into decay. Jamaica tourism minister Edmund Bartlett said there are efforts underway to restore some of the historical architecture, and a cab driver who took me to Montego Bay Airport confirmed they have started, but most of the town remains somewhat ramshackle.

Two showcases of the Georgian era, the courthouse and the Anglican church, fit squarely in the colonial style of much of the Caribbean, and I was mildly disappointed that the quality wasn’t as high as in some American colonial villages, much less the London originals on which they are based.

Beyond the gates, there are vendors and would-be tour guides trying to drum up business, but I didn’t find them as aggressive as some reports might suggest. On the whole, however, a first-time visitor to Falmouth might be better off taking the excursion to Ocho Rios rather than hanging around in town.

Cuba up close on Celestyal sailing

Royal Caribbean’s Navigator of the Seas getting water coaster