When the leaders of the world’s four largest cruise lines were asked recently when they expected to place new ship orders, they were unanimous in their response: No time soon.

Gathered for the annual Seatrade Cruise conference, held virtually this year, Norwegian Cruise Line Holdings CEO Frank Del Rio was the most specific. With nine ships on order through 2027, he said, “I think I’ll take delivery of at least one vessel for those brands before I start thinking about additional orders.”

The first of those deliveries, for Norwegian Cruise Line, is set for 2022.

It is not clear how long the other lines will go without placing new orders, but 2020 has already become among the rare years that no ship orders have been made.

A significant amount of old cruise ship tonnage has been sold for scrap this year, and some ships currently on order have been delayed or deferred. Should there be no new ship orders next year — a very real possibility, given the massive cruise industry losses this year — the near-term capacity growth slowdown could fall to levels not seen in decades.

“Clearly, nobody is signing new contracts right now,” said Lawrence Rapp, principal consultant at Seawise Consulting. “Everyone in the industry is trying to conserve cash where they can.”

Rapp also predicts additional ship order delays, which he said benefits both cruise line cash outflow and the shipyards, which have struggled with labor and supply chain issues related to the pandemic. He expects there will be further deferments as the lines negotiate later deliveries and payment schedules.

Carnival Corp. said this year that it will remove 18 ships from its nine-brand fleet, equal to 12% of its pre-pause capacity. But neither it nor its major competitors have outright canceled existing orders. Despite operating under the CDC’s No Sail Order since March, Carnival Corp. took delivery of two ships in 2020, the Enchanted Princess and P&O Cruises’ Iona, and it expects to add three more in 2021, including Carnival Cruise Line’s Mardi Gras.

But that is a reduction in the number of deliveries originally planned for this year and next from nine to five, which Carnival Corp. CEO Arnold Donald said would defer over $3 billion in capital expenditures into fiscal 2022 and beyond.

According to data from Cruise Industry News, over the past 20 years, the cruise ship orderbook has dipped following previous economic downturns, including after 9/11 and the Great Recession in 2008.

But shipbuilding industry experts note that every year for the past few years has set a record in terms of cruise ship deliveries. And with no cancellations, the current orderbook remains quite healthy. 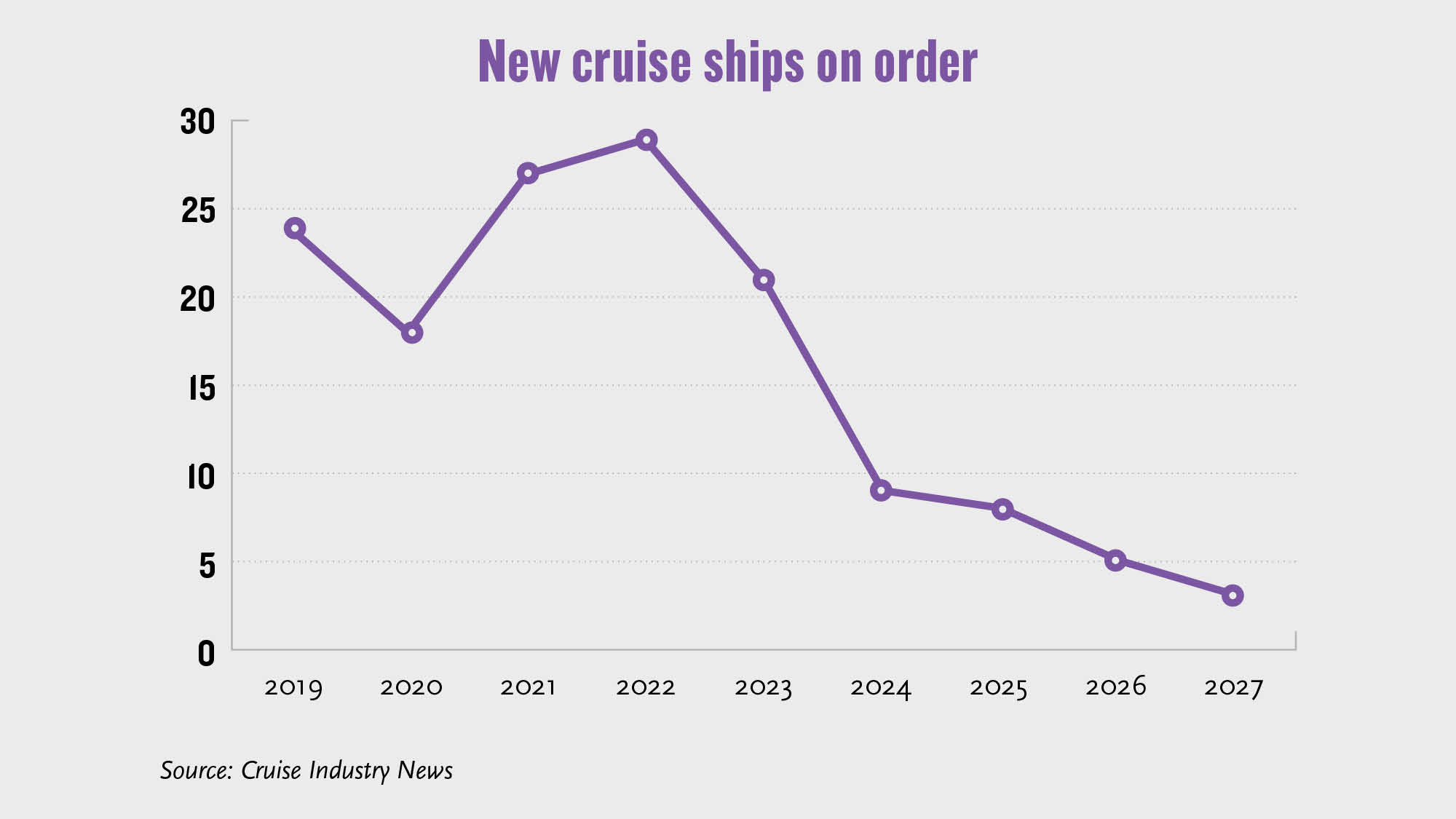 “The growth will continue but maybe not at the same pace,” said Monty Mathisen, managing editor of Cruise Industry News. “Pre-Covid, the number of ships for this year was most likely a record. I don’t think we’ll see record years, but the industry will grow. New ships that garner higher ticket premiums, better onboard spending and that are more economic to operate will always be part of the business model.”

Rapp also said that with no ship cancellations, the shipyards remain full. So much so that one of his clients has been trying to negotiate a delivery slot and is not finding much availability.

“What we’ll see is that the orders that are pushed back will take the place of what would have been new orders in the shipyard books,” he said. “So that lull is close in and then things will ramp up. All of this is predicated on a vaccine coming online and being effective and things returning to normal within a year to 18 months. If that doesn’t happen, all bets are off.”

Mathisen also noted that despite the severity of the pandemic, these ships are long-term assets, which is why cancellations continue to be unlikely.

“If you look at the economics, a new ship that you may have for 30 or 40 years will generate a lot of earnings. Waiting a few months to get it or operate it is not a big deal in the grand scheme of things,” he said.

Bright side to fewer orders

And slow growth can have its upsides. According to Rapp, that’s especially true for the cruise giants that have “the financial wherewithal to better weather this storm” and will end up with newer, more efficient ships.

“The industry is very adaptable,” he said. “I think it will probably be a catalyst for consolidation: We’ll see fewer lines and larger lines, and at the beginning there will be some undercapacity perhaps and prices will go up, and all that is good news for the big players.”

During Carnival Corp.’s latest earnings call, a Wall Street analyst also suggested the industry would be in “an outstanding position” in terms of being able to push pricing, with so much capacity being removed and a slowdown in newbuild orders through 2026.

“You’re right,” Donald said. “These are conditions we’ve never experienced before …. The bottom line is there will be somewhat constrained capacity, dramatically constrained initially, and over time, still constrained. Then, not a lot of newbuilds for us in the 2024 or 2025 time frame.”

In fact, Carnival has been saying for months that the lower capacity combined with pent-up demand would push prices up.

But once cruise begins again, it’s possible the lines will reverse course on any ship order slowdown.

In July 2019, Royal Caribbean Group CFO Jason Liberty told analysts that the company wished it had not curtailed orders as much as it did after the Great Recession.

“There is definitely regret that we have in terms of our pullback on our growth,” Liberty said. “We would all be talking about higher earnings numbers today, better return profile today, if we hadn’t slowed down our growth or our investment efforts in expanding our global footprint, investing in different projects, that would have put us in an even stronger position than we are today.”

Marella Cruises extends pause in operations until end of March