A fast-moving Caribbean storm chased us off the idyllic, mostly empty Cuban beach. When I pushed the key card into the door of our third-floor hotel room, nothing happened. Tried again. Nothing.

A new card arrived just before rain began pounding the roof of our all-inclusive, government-owned resort near Trinidad. We escaped the deluge, but our neighbor’s room flooded.

When traveling in Cuba, it’s best to be prepared. A lot of things don’t work well: WiFi, U.S. credit cards, cellphones. The food is mostly mediocre; drinks are watery.

Even so, Cuba can be astonishingly beautiful. So you shrug, as our affable Cuban guide often did, and marvel at the unspoiled beauty of an island lost in time and admire the perseverance of its people.

The Bay of Pigs, among the stops on a seven-day people-to-people Cuba tour by Toronto-based Cap’s Tours. Photo Credit: Barbara Redding

Last year I arranged a people-to-people tour through Cap’s Tours of Toronto. Construction cranes dotted the Havana skyline during my seven-day visit, which included stops in Cienfuegos and Trinidad. But transforming the country’s famously crumbling infrastructure and massive colonial buildings is a long-term proposition.

In the meantime, visitors need to be prepared for adventure — and inconveniences.

• The cars: Cap’s Tours director Clem Paredes Rodriguez, who grew up in Havana but migrated to Canada eight years ago, picked me up at the Havana airport in a Chinese-built rental car. I was hoping for a ’55 Chevy or a Cadillac convertible, but I was thankful for air-conditioning. Vintage, candy-colored American cars taxi tourists around for fun and photos, but otherwise few vehicles ply the roads.

• Snorkeling in the Bay of Pigs: Our resourceful guide arranged a snorkeling stop along the famous bay. The dive shack had no electricity or plumbing; the changing room was a shed whose door wouldn’t close. No matter. We plunged into the aquamarine water behind our guide, Alex. The highlight was spying a small boat sunk during the ill-fated, CIA-sponsored invasion in 1961. Even better: the fresh-caught lobster Alex grilled for lunch and served with mojitos.

• The hotels: Nothing much has changed at the 1930s-era Hotel de Nacional de Cuba, where the Mafia once mingled with movie stars. That’s both a compliment and a complaint about the 450-room hotel overlooking Havana’s Malecon.

We stayed in three other shabby but comfortable government-owned hotels. Service was pleasant, amenities adequate: one roll of toilet paper per room and clean but thin towels. 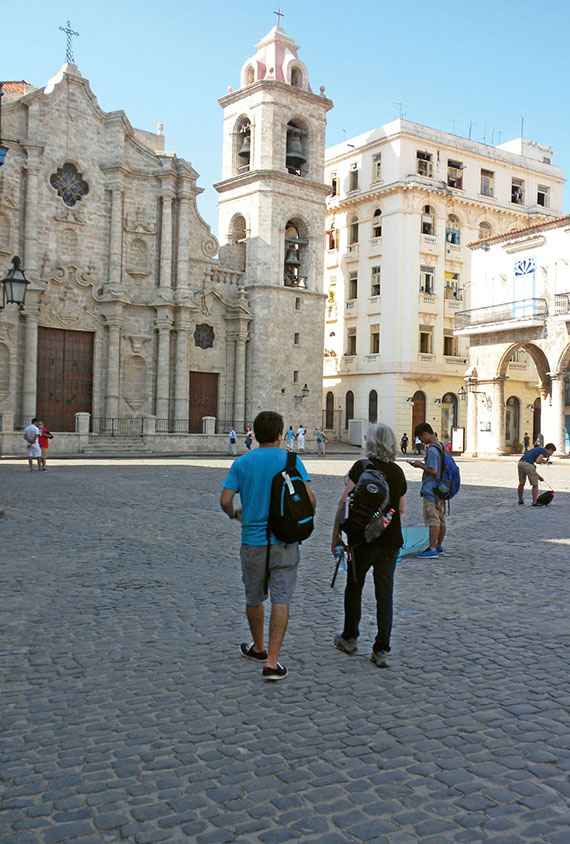 Cathedral Square in Old Havana. The massive limestone cathedral was built by the Spanish in the 1770s. Photo Credit: Barbara Redding

• The food: Our meals in paladares, private restaurants run by Cuba’s nascent entrepreneurs, were generally quite good. At our first dinner at Dona Eutimia in the old city, we devoured fresh fish and slushy mojitos; our last meal at La Guarida included a decadent dessert, which was also served in Cuba’s only Oscar-nominated movie, “Fresa y Chocolate.” At San Cristobal, perhaps the city’s best-known paladar, our waiter shared photos of Barack Obama, who ordered a steak during his visit as president.

• The sites: An ambitious itinerary took us along the cobblestone streets of Old Havana to a massive limestone cathedral (built by the Spanish in the 1770s) and to the city’s oldest square, where several massive renovation projects are underway. The country’s capital building is instantly recognizable (it looks like the U.S. Capitol, and it’s covered in scaffolding) as is Revolution Square, where Fidel Castro delivered many fiery, anti-U.S. speeches.

• Music and art: Havana is rich in both. At the hip Fabric de Arte Cubano, avant-garde art meets salsa-rap-fusion music in a former cooking oil factory. The city’s best-known jazz club, La Zorra y el
Cuervo, is in the cramped basement, where we listened to a gifted pianist. A troupe of schoolgirls sashayed to salsa queen Celia Cruz’s “Quimbara” during a performance on the terrace of Ernest Hemingway’s former Havana home.

For more information about Cap’s Tours, go to www.capstours.com.