Music in the air, salsa dancing, mojitos and, most of all, brightly colored vintage cars: I didn’t have to look for “spirit of place” here — this could only be Cuba.

But now that U.S. government regulations have relaxed and travelers can more easily book flights in and out of Havana, does exploring Cuba by sea make sense for travelers who want a wide-ranging and authentic experience?

As it turns out, the answer is yes, as I recently discovered on a weeklong Cuba cruise aboard the 476-cabin Celestyal Crystal at the invitation of Celestyal Cruises.

Our cruise sailed in and out of Montego Bay, Jamaica, and called at Santiago de Cuba, Maria la Gorda, Cienfuegos and, of course, Havana, where we spent two days. We also had a day at sea circumnavigating the coast from Santiago de Cuba to Havana.

Along the way, because this was a people-to-people program, our time onboard was enhanced by lectures about various aspects of Cuban history and lifestyle, as well as by themed activities (such as Cuban cooking, Spanish language and salsa dancing lessons) and local culinary specialties in the dining room, served by a largely Cuban crew. The more traditional onboard offerings included a full-service spa and a casino.

A local man poses for a picture in Trinidad, the only inland excursion during the Celestyal Crystal’s Cuba cruise. Photo Credit: Felicity Long

Our first stop was Santiago de Cuba, where we visited El Morro Castle, which was originally built in the 16th century as protection against pirates. It was restored and reopened as a museum in 1978 and declared a Unesco World Heritage site in 1997.

While touring the castle, we came upon a quartet of women singing a capella in an anteroom with acoustics that projected their voices so well that they sounded like an entire chorus.

This explosion of music was a theme throughout our voyage; in fact, I can’t remember a restaurant, cafe or site we went to that didn’t offer gorgeous musical entertainment.

Santiago de Cuba’s main plaza, Cespedes Park, features the town hall where Fidel Castro delivered speeches to his followers at the culmination of the 1959 revolution, as well as a casino-turned-wedding palace, the restored Cathedral of Our Lady of the Assumption that now houses government-owned shops and a pedestrian street filled with cafes and stores.

We also stopped at the Moncada Barracks, which Castro attacked during the run-up to the revolution and is still riddled with bullet holes; San Juan Hill, where Teddy Roosevelt and the Rough Riders defeated the Spanish during the Spanish-American War; Revolution Square, just about every city in Cuba has one; and the Santa Ifigenia Cemetery, where there is a changing-of-the-guard ceremony every half-hour.

For those of us who were new to the destination, Havana was a much-anticipated highlight, and our first impression did not disappoint.

Rather than climb onto buses for our city tour, we set out in a fleet of beautifully restored antique cars, our drivers honking noisily as we made our way through the city. My favorite stops include the Central Park square, where President Obama spoke during his recent visit and where lines of more antique cars-turned- taxis lined the square.

Havana’s Revolution Square features familiar images of Che Guevara and Camilo Cienfuegos plastered on the exteriors of ministry buildings and serves as a venue for everything from concerts and political events to papal masses.

We spent a few hours at Palacio de la Artesania de Don Mateo Pedroso to sip rum and coffee and smoke Cuban cigars, accompanied by the music of an all-women band who, according to the rum/cigar sommelier, has played at the famed Buena Vista Social Club. 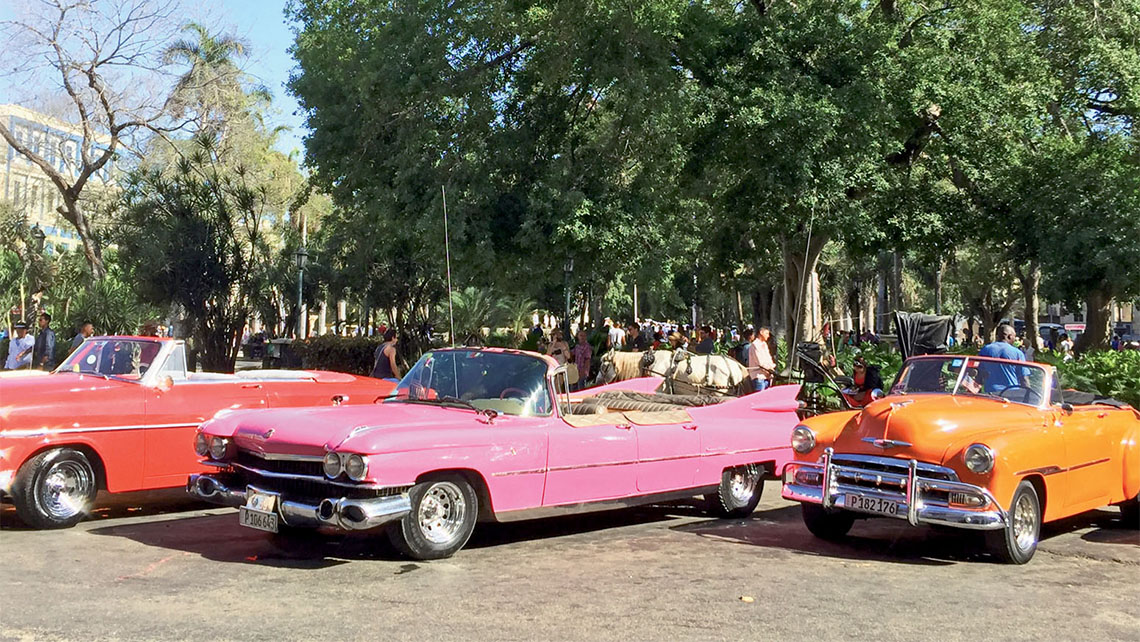 In Havana, some restored vintage cars have been transformed into taxis. Photo Credit: Felicity Long

Having a second day in Havana gave us more time to explore the sites we had missed the day before, and we concentrated on the four main squares in the city: Plaza Vieja or Old Square, Arms Square, Saint Francis of Assisi Square and Cathedral Square, all within easy walking distance of each other and each with its own personality.

Locals seem proud of the city’s association with Hemingway, and his life-size statue in the El Floridita, a bar billed as the home of the daiquiri, is a popular spot for selfies.

We had lunch at Restaurant La Casa, just out of town, one of Cuba’s first privately owned restaurants, which has been in operation for 21 years.

Another highlight was the Tropicana cabaret show, which was cheesy and fun, thanks to hundreds of dancers in outlandish costumes and the bottles of rum the wait staff freely dispensed to each table.

Although it’s unlikely that anyone would travel to Cuba simply for fun in the sun, the call in Maria la Gorda, the only port that required tenders, was a welcome break in our busy sightseeing schedule.

The entire area is a Unesco World Heritage site, and our group was given the option of diving or snorkeling from a boat or simply exploring the beachfront on foot. The snorkeling was an unqualified success, thanks to crystal-clear water and a beautiful coral reef teeming with marine life, including puffer fish, barracuda and stingrays.

In some ways our last day was the most challenging, thanks to the 90-minute drive each way from the port of Cienfuegos to Trinidad, which left only a few hours on the ground to enjoy the town, another Unesco World Heritage site.

Nonetheless, Trinidad provided not only our first foray inland, but it also gave us a sweeping view of the countryside, the long, barely developed seacoast and the dramatic mountain ranges in the distance. 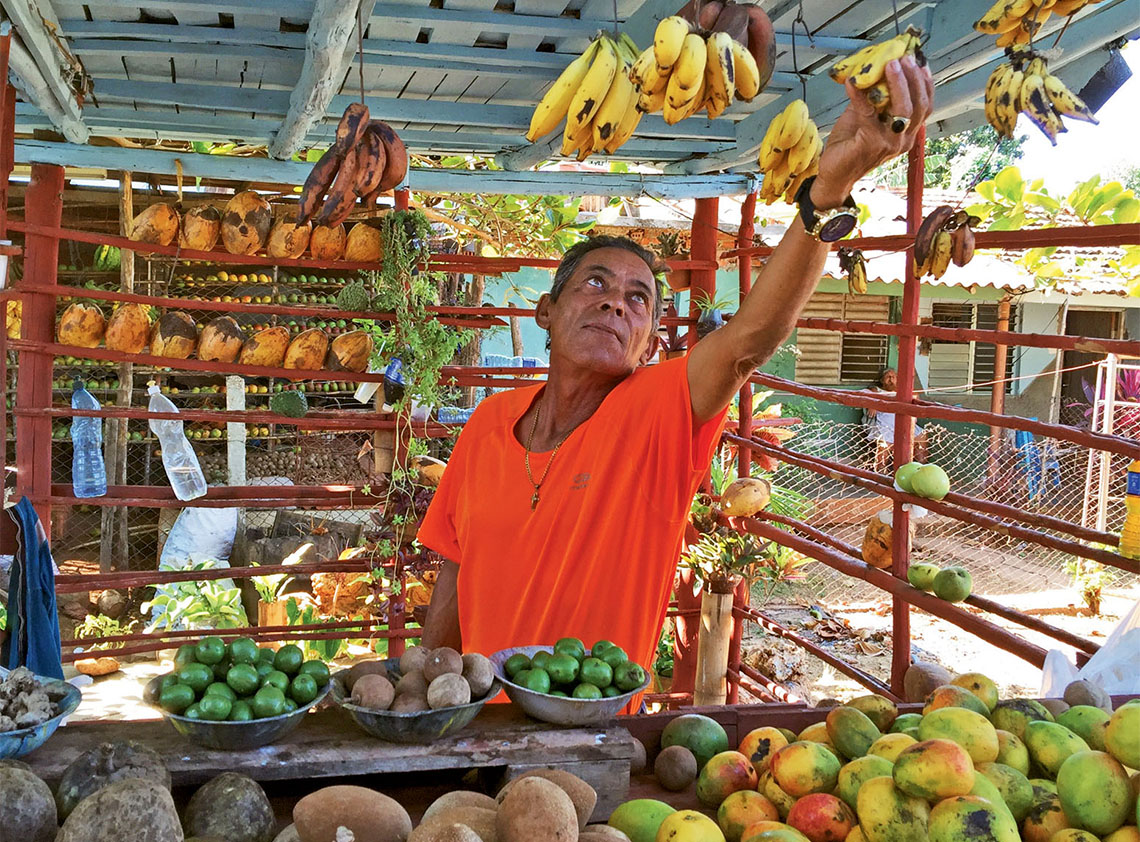 A fruit stand on the road from Cienfuegos to Trinidad. Photo Credit: Felicity Long

We stopped once en route to buy fruit, some of it exotic and unfamiliar to us, from a local farmer, then spent the time in town to explore some of the museums, shops and open markets lining the courtyard of Plaza de Armas, which once held bullfights. We also stopped for a buffet lunch at a local paladar (privately owned restaurant), accompanied by — what else? — wonderful music.

The Crystal, which has been cruising to Cuba since 2012 with Canadian and other non-U.S. passengers, will serve the destination year-round starting in November. The 2016-17 itineraries will replace Maria La Gorda with Punta Frances, which features a national marine park and nearly two miles of beaches.

The updated itinerary, valid through the end of 2017, will offer embarkation in either Havana or Montego Bay.