The atrium of Cunard Line’s Queen Victoria, which underwent a $42 million revamp this spring.

Cunard Line’s $42 million revamp of the Queen Victoria this spring has given passengers a bunch of new drinking options as well as some improved suites, a third Grill-style restaurant and a new future-voyages sales center.

I had a chance to sample the changes recently on a four-night cruise from Southampton, England, hosted by Cunard.

Foremost among the new bar choices is the Gin & Fizz menu at the Midships Bar. Taking advantage of the renewed trendiness of gin, which also fits Cunard’s traditional British sensibility, the bar offers scores of gins from around the world, which can be matched with nearly a dozen tonic brands.

The potent gins can be a little daunting to sample, but bartenders are there to help you make an informed choice.

Familiar names such as Bombay and Tanqueray are shelved side by side with more exotic brands like Fifty Pounds, from England; The Botanist, from Scotland; and Monkey 47 from Germany.

The Champagne Bar that previously occupied the Midships Bar space has been repurposed as a set of mobile carts that serve Champagne around the ship during events such as the sail-away party.

Also new is the Yacht Club, which was formerly Queen Victoria’s disco and as such was underused until the late evening. It is now a lounge for jazz, where, following a midafternoon port lecture, guests are invited for jazz guitar. The music amps up later. A new drinks menu is built around nautical flags; the cover features the flags for the letters Y and C.

Several other bars have also received custom menus. “In the past we would have had one bar list with everything we sold,” said Fred Francis, Cunard’s brand manager. “It was too much choice.”

Like Cunard’s other ships, Victoria had staterooms tied to the Queen’s Grill and Princess Grill restaurants. In the refit, a Britannia Club restaurant was also added, so Victoria, like the Queen Mary 2 and Queen Elizabeth, now has Britannia Club staterooms, 43 in all. 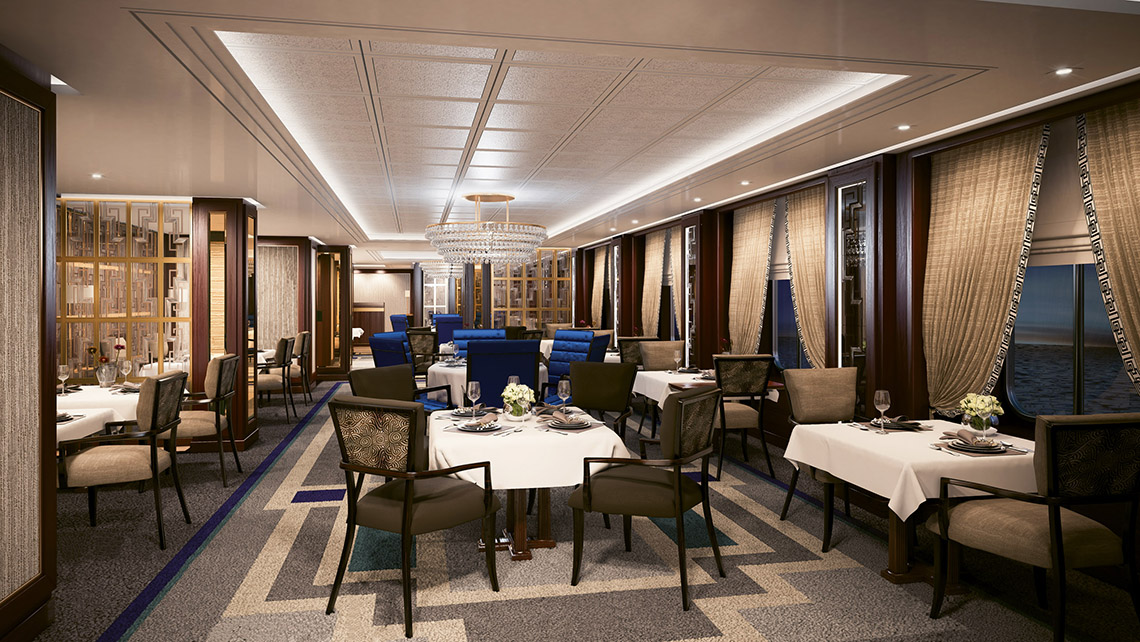 A rendering of the new Britannia Club restaurant, which was added in space previously used for the Carinthia Cafe.

The refit also hoisted a new cabin block in place on the top aft of the ship, which created new suites for the Queen’s Grill. The suites now have baths at the edges, rather than in the center of the suites, for more natural light.

The underutilized Winter Garden has been redesigned, as have other areas of the ship, to become brighter and more lively, said Allison Clixby, Cunard’s director of hotel design and projects.

Previously, the ship had been brown and old-fashioned, Clixby said. “We’re trying to rebalance that and make it more like today’s version of traditional,” she said.

Cunard converted a prime space at the center of the ship that had been used for a duty-free and sundries shop into the new voyage sales center. Rather than make it office-like, the space has been designed as a stylish emporium.

“We’re trying to make it more of a retail experience,” Francis said. “It’s still a work in progress.” 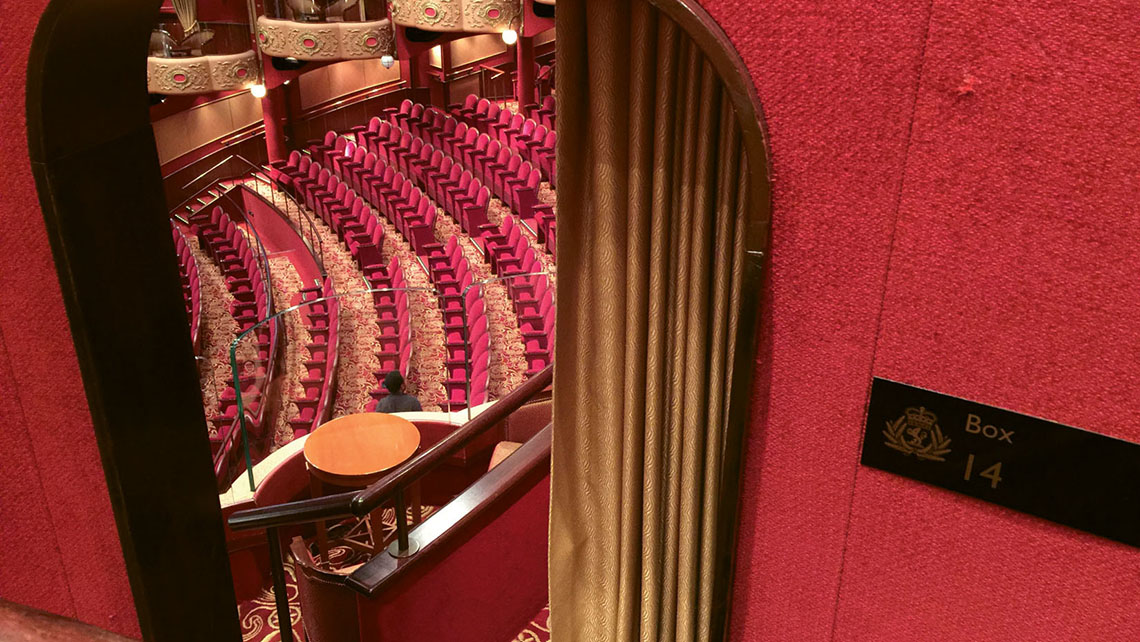 Many of the things that make Cunard so appealing as a brand have been preserved in the overhaul.

The ship’s theater, for example, is modeled after a West End theater in London and has real boxes that can be curtained-off from behind.

The three-tiered theater is decorated in red and gold on the Queen Victoria (blue and gold on sister ship Queen Elizabeth) and there is a Royal Box seating six to eight that on formal nights can be reserved for a fee and comes with reception Champagne and a selection of sweets, Francis said.

Another brand signature, thankfully unaltered, is the two-story, wood-paneled library. With 7,000 volumes, it’s one of the biggest at sea.

“Cunard has a proper library,” said Svetlana Minic, one of two librarians that staff the book vault. The only library bigger than the one on the Queen Victoria is the one on the larger Queen Mary 2, which has 10,000 volumes, Minic said.

Besides English, there are volumes in foreign languages including Italian, French, German, Japanese and a small number in Chinese. Reference books include a complete set of the Encyclopedia Britannica.

I had never before eaten in the Queen’s Grill, the ship’s premier dining venue, but those who had assured me that it is as special as always. The hitch, of course, is that admission comes only with the price of a Queen’s Grill cabin (although our press group was permitted to dine for one night to sample its fare).

Our regular dining venue was the new Britannia Club restaurant, a long space with windows that was carved out of what had been the Carinthia Cafe, now retired. What I liked most about the restaurant was seeing the same people at dinner every night, and having the same staff. The sommelier seemed particularly dedicated to giving us the best possible wine pairing with our food.

The blue, brown and gold decor has hints of the ship’s previous art deco theming, but in subtle locations, such as chairbacks and the geometric design of the carpet. The overall look is subdued and more modern, but with a little history woven into the details.

Queen Victoria has updated look but the same grand library