Although frenetic, in-your-face Mumbai is considered the gateway to South India, it is light-years away from Kerala, the subcontinent’s southwesternmost point.

Best known for its vast, lazy backwaters; wildlife sanctuaries; and cool hill stations carpeted with plantations, Kerala provides a soul-stirring experience with vibrant, colorful cities, striking for their rich legacies of colonial eras (the Portuguese, Dutch, French and British all wanted their share) and the many long-gone civilizations before them. The delicious, spice-laden cuisine is distinctive, with European influences, and the people are friendly.

Self-proclaimed as “God’s Own Country,” Kerala has captured the foreigner’s fancy since explorer Vasco da Gama first landed there, drawn by tales of the coveted black pepper and wealth of spices that Christopher Columbus sought but never found.

Kerala lies south of Goa, the coastal state that early backpackers and revelers — and today young millennial escapees from Mumbai — put on the map. Long and slender, with over 350 miles of its own tropical Malabar Coast lapped by the Arabian Sea, Kerala’s golden-sand beaches at Kovalam and Varkala have grown in popularity, but its attractions extend far beyond.

“Many travelers opt for the South as their first trip to India,” said Jarrod Hobson, Asia travel specialist at Boulder, Colo.-based ATJ, who perfectly crafted our two-week journey through this intoxicating region.

This was good news for Elizabeth, my travel companion who was fulfilling a decades-long dream of visiting India.

“The South has more promise for a gentler, more relaxing and less taxing introduction to the wonders of India,” Hobson said. “You’ll find it less chaotic and with a very educated and enlightened civilization and people.”

The values placed on advanced education and the arts have made Kerala one of the most progressive states in post-independence India, with the literacy rate of its 33 million people the nation’s highest. Impressive strides in tourism, put on temporary hold when devastating monsoons struck here last summer, have attracted influencers and press who have heralded it as one of the country’s new hot spots. Of the approximately 15 million annual visitors, just 1 million are foreign tourists.

Foreigners have been flocking to the port city of Kochi for more than 600 years — records tell of trade with the ancient Romans and Phoenicians — and their presence is still seen (and tasted) everywhere, especially the historic district of Fort Kochi.

We checked into the five-star Brunton Boatyard, owned by CGH Earth, formerly the Casino Group of Hotels. It is a breezy and faithful reproduction of early Dutch and Portuguese architecture, with 22 spacious rooms that all face the harbor.

We set off on a stroll along the waterfront past fish sellers and souvenir vendors who were more interested in practicing their English than their sales pitch. We watched as fishermen maneuvered the 30-foot, cantilevered Chinese fishing nets, the unofficial emblem of Kerala, and visited the modest St. Francis Church built in 1503, believed to be the oldest church in India. A tombstone indicates where da Gama was buried in 1524 and remained for 14 years before his body was sent to Lisbon.

Kerala is India’s most religiously diverse state. With a dominant Hindu majority, the state is home to the greatest concentration of Catholics in the country thanks to both the early Portuguese presence and St. Thomas the Apostle, who preceded them in the first century. A brief ride brought us to Mattancherry and Jew Town, a bustling bazaar district whose pedestrian Synagogue Lane, lined with Muslim-owned shops selling spices and Judaica, leads to the Paradesi Synagogue, which was built in 1568 and is the only one of seven built in the area still in use. Our multicultural day was topped off with an evening at the Kerala Kathakali Dance Centre that is keeping alive this dramatic art form with its elaborate gestures and facial expressions, makeup and costumes.

For the peace and quiet for which Kerala is renowned, we headed out of Kochi in the direction of Alappuzha, where our comfortable, rice barge-inspired houseboat — and dozens of others on standby — awaited. Accommodating both couples and small groups, these kettuvallam houseboats can be booked for a day or longer to float through Kerala’s famous tangle of backwaters that run parallel to the coastline. 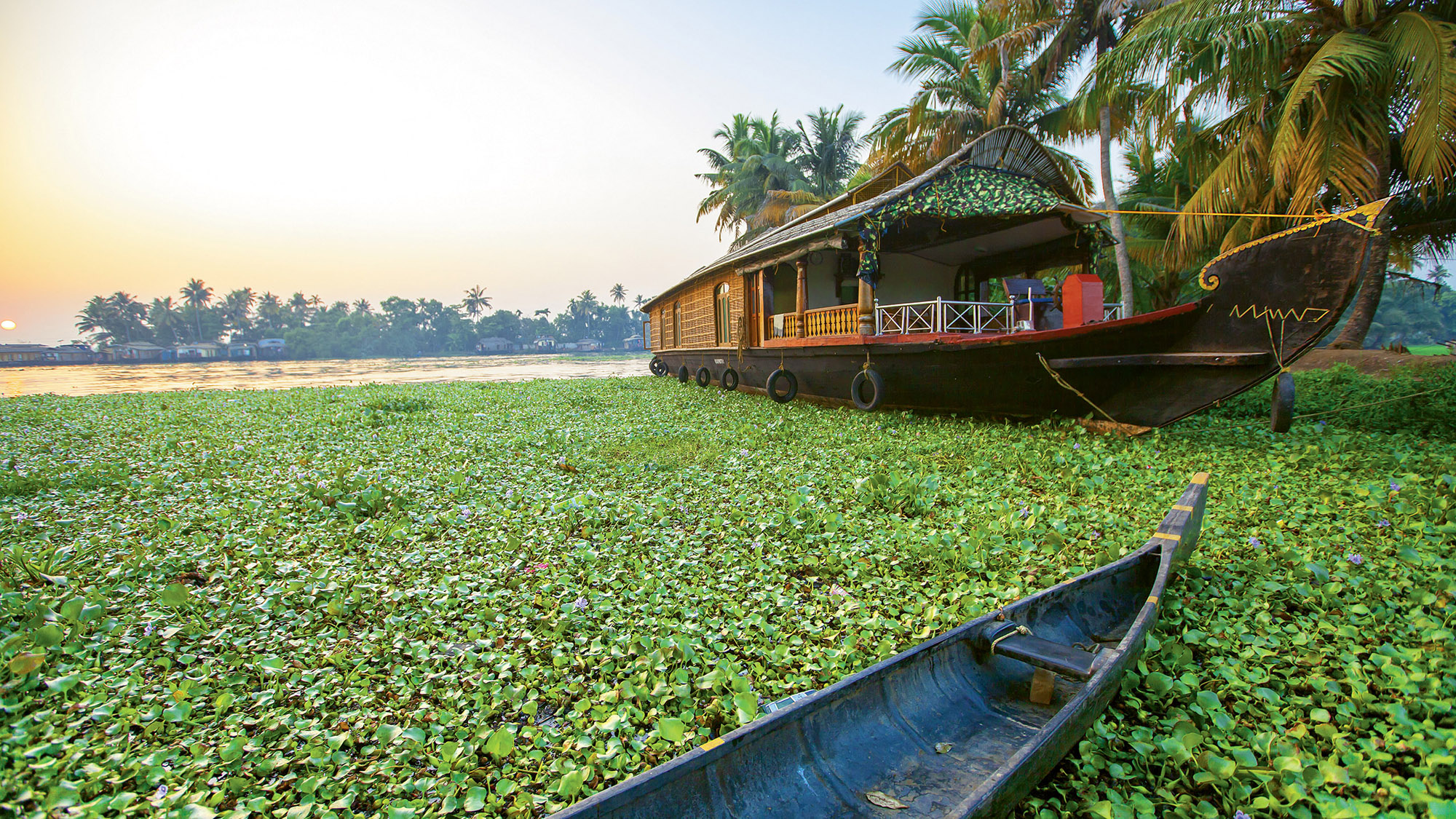 A kettuvallam, or houseboat, cruises the backwaters of Kerala. Photo Credit: Courtesy of ATJ

More than 40 rivers drain into the sea here, creating lakes, lagoons, channels and 600 miles of vegetation-lined waterways that feel like a world apart from the usual clamor of India. It is a lusciously green landscape, where stuck-in-time villages slip by, many accessible only by boat. Women in bright saris wash clothes and spread them to dry along the banks, while kids ride bikes on their way to school and adults on their way to work in the paddies — this is the “Rice Bowl of Kerala.” Harvest festivals and snake boat races are eagerly awaited annual events in this part of the country.

To extend the mellow pace of the backwaters, albeit on terra firma, we unpacked for a few indulgent nights at the beautifully landscaped Kumarakom Lake Resort, whose website shows a beaming Prince Charles celebrating his 65th birthday there in 2013. Nestled amongst the many private villas was an elegant, temple-like spa, one of the region’s finest places to experience ancient ayurvedic treatments originating in India.

For a more intimate glimpse of life in this unique ecological corner of the country, we headed to Philipkutty’s Farm, a family-owned organic farm on its own small island run by the delightful Anu Mathew, her mother-in-law Aniamma and Anu’s two grown children. Our time there epitomized everything wonderful about Kerala; we enjoyed an extravagant lunch prepared by the gracious Mathew family as we watched and learned (many of the ingredients used were grown on the farm, including coconut, banana, cashew, cocoa, vanilla and black pepper). Six airy and stylish homestay villas line the island’s waterfront, and I was only half-kidding when I told Anu I would be back next year to write that novel in my head.

From the backwaters, a gorgeous ride through farm country and small villages and a few steep switchback curves brought us up into the densely forested Cardamom Hills of the Western Ghats mountain range. Meandering roads led past springs and waterfalls and opened onto dizzying views of breathtaking scenery. The cool, fresh air has long drawn those escaping the steamier climates below, including the British, who founded what would become South India’s tea-growing heartland in the late 19th century. We stopped the car repeatedly to drink in the contoured plantations that extended as far as the eye could see.

Of the wonderfully remote lodgings hidden in these hills, we certainly must have picked the nicest, Spice Tree, near the popular hill station of Munnar. A boutique mountain wellness retreat, it harmoniously blends with its lush surroundings, with 14 rooms that offer transportative views of deep valleys and forested hills rich with birdsong. We visited a tea museum and spice gardens and shops, where I bought so many spices as gifts — cardamom, cloves, cinnamon, ginger and nutmeg — that my suitcase will smell like God’s Own Country for many years to come.

ATJ designs custom itineraries based on guests’ interests and budgets. Rates for a bespoke India itinerary begin at $450 per person, per day, double occupancy. For more information, go to www.atj.com or email Hobson at [email protected].

Contributing editor Patricia Schultz is the author of “1,000 Places to See Before You Die.”

Temples of Goddess Durga in India with unbelievable truths

Why is an exhilarating Tauck tour endangered?