The Church of the Grand Palace at the Peterhof, a palace complex commissioned by Peter the Great. Photo Credit: TW photo by Tom Stieghorst

Drawn by beauty, history and a modern terminal, cruise ships are increasingly coming to St. Petersburg, Russia, home of Imperial czars and the 1917 Russian Revolution.

A cruise ship stop in the former Russian capital is a window into one of the most compelling political dramas of the 20th century and into a culture that has always had one foot in Europe and one in Asia.

Guests sail into a contemporary cruise port capable of hosting nine ships at a time. From the pier, 21st-century Russia is on display in the form of Gazprom’s new rocket ship of an office tower and the 70,000-seat stadium that hosted FIFA World Cup soccer matches in 2018.

Port authorities expect calls to rise 10% this year from the 360 recorded from May to September last year.

But leave the port on a tour bus and your view changes, as you motor past scores of enormous, monolithic apartment blocks, some built in the Soviet era when the average apartment was 500 square feet.

Farther on, a cruise tour reaches the heart of the city, the Peter and Paul Fortress, where in 1703, Peter the Great founded a new Baltic capital aimed at bootstrapping Russia into European society. The cathedral inside the fortress, gold gleaming from every surface, is the burial site for most of the Romanov rulers.

Until 1918, Imperial Russia was governed from St. Petersburg. A tour of its treasures includes the neoclassical Winter Palace, now open to the public and home to the Hermitage, one of the world’s great art museums.

On the outskirts of St. Petersburg stand two enormous, bedazzling royal residences: the sky-blue Summer Palace and the Peterhof, originally a modest retreat for Peter and now celebrated for its baroque water garden.

The most practical way to see these sites is on a group tour, either through the cruise line or by arrangement with one of the several reputable independent tour operators in St. Petersburg. 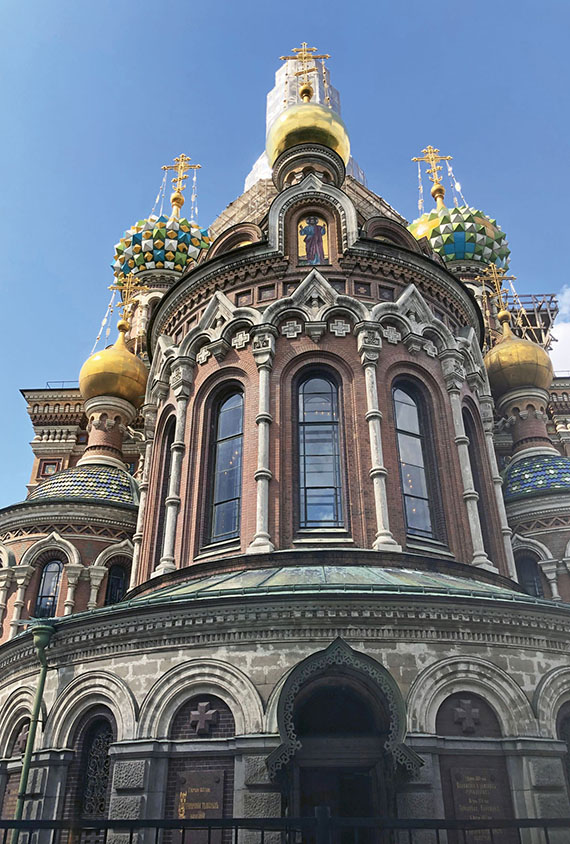 The Church of the Savior on Spilled Blood was built on the site where Alexander II was killed by an assassin’s bomb. Photo Credit: TW photo by Tom Stieghorst

Americans on their own in Russia need a visa, which can be complicated and expensive to obtain.

St. Petersburg was the centerpiece of my seven-day Baltic cruise hosted by Seabourn Cruise Line. The Seabourn Ovation spent three days and two nights in the city, allowing for a rare depth of experience.

The luxury of a three-day stay meant our tour operator, Alla Tours, could tailor our agenda to reflect days that museums and churches would be closed or inordinately crowded. In one day, we squeezed in visits to St. Peter and Paul Fortress, St. Isaac’s Cathedral, the Church of the Savior on Spilled Blood and the Yusupov Palace, where Russian mystic Grigori Rasputin was murdered.

These sites fill fast in the summer, and even with a guide you are moved along pretty quickly. But the tableau in the very basement room where Prince Felix Yusupov shot Rasputin really brought history to life.

A second day started with a boat tour, a suitable way to see a city at the mouth of the Neva River that has 42 islands and 342 bridges. It also brought us close to Russian warships anchored midriver for the annual Navy Day parade.

Our third day opened with a short ride in St. Petersburg’s well-regarded subway before a Hermitage tour; some time on Nevsky Prospekt, the great boulevard of the city; and lunch at the famed Brasserie de Metropole, which has its origins in the 1800s.

We finished our day at the Faberge Museum, opened in a former aristocrat’s mansion after a Russian tycoon acquired nine of the jeweled Easter eggs from the heirs of American magazine publisher Malcolm Forbes, reportedly for more than $100 million.