ABOARD THE SILVER MUSE — The cuisine of the Indonesian island of Bali is pretty far removed from the experience of North Americans.

While there are some Indonesian restaurants in the U.S., few if any specialize in dishes from Bali (the sole Hindu island in a nation that is predominantly Muslim), even though Bali is Indonesia’s most popular tourist destination.

So, getting to spend parts of four days learning about Balinese cooking, and making a few dishes, provided a window into the culture and cuisine of this distant and intriguing place.

A group of journalists had been asked to join a cruise from Bali to Manila to experience a new regional culinary program being developed by Silversea Cruises. Called Sea and Land Taste (SALT), the program is being refined for its debut on the Silver Moon, scheduled for delivery in 2020.

The three pillars of the program are ingredients, technique and people. We got a good exposure to all three in presentations by food journalist Maya Kerthyasa, who was raised in a royal palace in Bali and now splits time between her homeland and Perth, Australia.

To start with, Kerthyasa familiarized us with Balinese ingredients. Some, such as shallots, chilis, garlic and ginger, are standards in Western cooking. Others, such as fern tips, torch ginger flowers, galangal and moringa leaves, were more exotic.

Coconut, in all its forms, is a big ingredient in Balinese fare. A wide variety of spices are also used, particularly in combination with coconut oil and chopped greens to make spice pastes as a cooking base.

When it comes to technique, bring your knives and watch your fingers. Things tend to be chopped very finely in Balinese cooking, part of the spiritual side of the cuisine. “Food is like an offering,” said Kerthyasa. “So, it really has to look beautiful.”

The recipes also tend to be complex because in a traditional home, only one meal is cooked per day, which is then set aside to be consumed as desired. “A lot of things are cooked twice or three times before they make it into the final dish, Kerthyasa said. “There are no one-pot wonders. Everything takes a lot of preparation, a lot of time.”

Among the dishes journalists were assigned to prepare was sambal matah, a finely minced chop of garlic, shallots, chilis, ginger, torch ginger flower and kaffir lime leaves that is mixed in a bowl by hand with coconut oil and lime juice to form one of the basic condiments of the Balinese table. 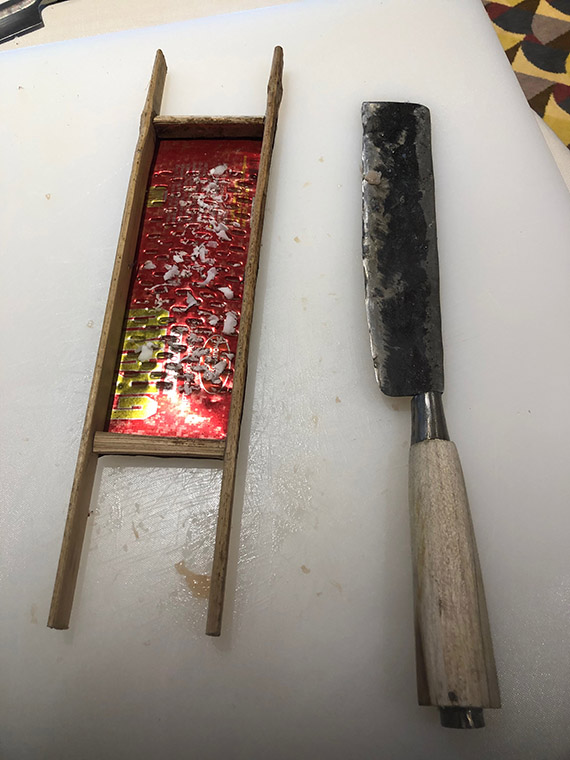 Classic implements, such as this grater and knife, are important to traditional Balinese cooks. Photo Credit: TW photo by Tom Stieghorst

The third leg of the SALT stool, people, was supplied by Kerthyasa’s stories of learning to cook from her grandmother, who was the 10th and final wife of her grandfather, an elder in the palace at Ubud.

“She’s a very talented cook and she learned a lot from my grandfather, who was a very, very spiritual man,” Kerthyasa said.

Many of the traditional and ceremonial recipes in Bali aren’t in cookbooks or written down. Kerthyasa is trying to remedy that by compiling a cookbook of Balinese cuisine based on her grandmother’s knowledge. One problem: cooperation.

“It’s very difficult. I have spent years trying to convince her to not just cook for me but to let me cook with her. I’ve had to go in there and say I’m not going to leave until you actually let me cook,” Kerthyasa said.

Material like that about her grandmother and other relatives added another dimension to what was already an interesting talk, making it more than about food and culture, but also about a human relationship.

“That’s what we’re looking for in the people we bring onboard,” said Adam Sachs, director of the SALT program, “people who know the food intimately, but who can also tell stories.”

Bridging the gaps between East and West on women’s trip: Travel Weekly