SANTA MONICA, Calif. — I got a great shot of my doughnut.

Perched on a cement ledge, the maple-bacon doughnut sat on a golden dish next to a bottle of Izze sparkling grapefruit soda with the mid-November, early-afternoon sun glistening through it and the slightly out-of-focus Santa Monica Bay in the background.

And for that Warholian touch (and because I couldn’t resist), the doughnut had a bite taken out of it. So went my first attempt at becoming an “Insta-Foodstylist.”

After Airbnb announced at its Airbnb Open conference in Los Angeles Nov. 17 that it would start selling single- and multi-day local excursions called Experiences on its home-based accommodations platform, the company fanned out journalists all over Southern California to partake in abbreviated versions of the tours it’d been testing during the previous three months or so.

The author’s version of “Breakfast of Champions.”

Far from the typical bus, Walk of Fame or Star Maps tours crisscrossing Los Angeles, our Experience took a fairly narrow interest — in this case, creating beauty shots of food and showing them off on Instagram — and combined it with a uniquely local vibe by using Los Angeles’ coastal communities as a backdrop.

Our group was met on the bluffs above Santa Monica Beach by instructor Stephanie Goldfinger, who for the past four years has parlayed her longtime cooking interest into a career as a personal chef and food stylist as well as a sizeable Instagram audience (her @cookingforluv account had almost 9,600 Instagram followers as of last week).

Complete with a prototypically mellow California (by way of the Midwest) vibe, Goldfinger gave us a shortened, four-hour version of what’s usually a seven-hour primer (over two days) on how to search out the best-looking produce at farmers markets and parlay them into pictures worthy of a spread in Bon Appetit or Food & Wine.

All the while, Goldfinger balanced her passion for the subject with an acknowledgement of how silly such efforts may appear to the uninitiated (though not that silly: Instagram’s #foodporn hashtag had more than 104 million posts as of last week). She also provided us with a list of “10 things to expect as a budding insta-foodstylist,” including tips such as “you will eat a lot of cold food,” “you will stand on many, many chairs,” and “you will often take a bite of your food before you remember to shoot it and will be sad for the rest of the day.”

Airbnb sponsored the excursions as part of its efforts to get journalists to test out the company’s most recent wrinkle designed to complement the home rentals: a platform called Trips, divided into categories called Experiences, Homes and Places.

In all, Airbnb is listing about 500 Experiences in 12 cities: Detroit; London; Paris; Nairobi, Kenya; Havana; San Francisco; Cape Town, South Africa; Florence; Miami; Seoul, South Korea; Tokyo; and Los Angeles and will expand the Experiences to 50 cities by next year.

For Havana, that may mean a jazz pianist leading a music-based excursion. In Florence, it’s a Tuscan trip with a “truffle hunter.”

Hosting between four and six people on each excursion, Goldfinger, who usually schedules her tours to include either a Wednesday or Saturday morning to coincide with the Santa Monica Farmers Market, said she’d led about a half-dozen tours that were booked through Airbnb’s pilot version of Experiences during the prior three months. She estimated that the two-day excursions will be priced at about $249 a person (Airbnb estimates that the median price for all of its Experiences will be about $200 each). 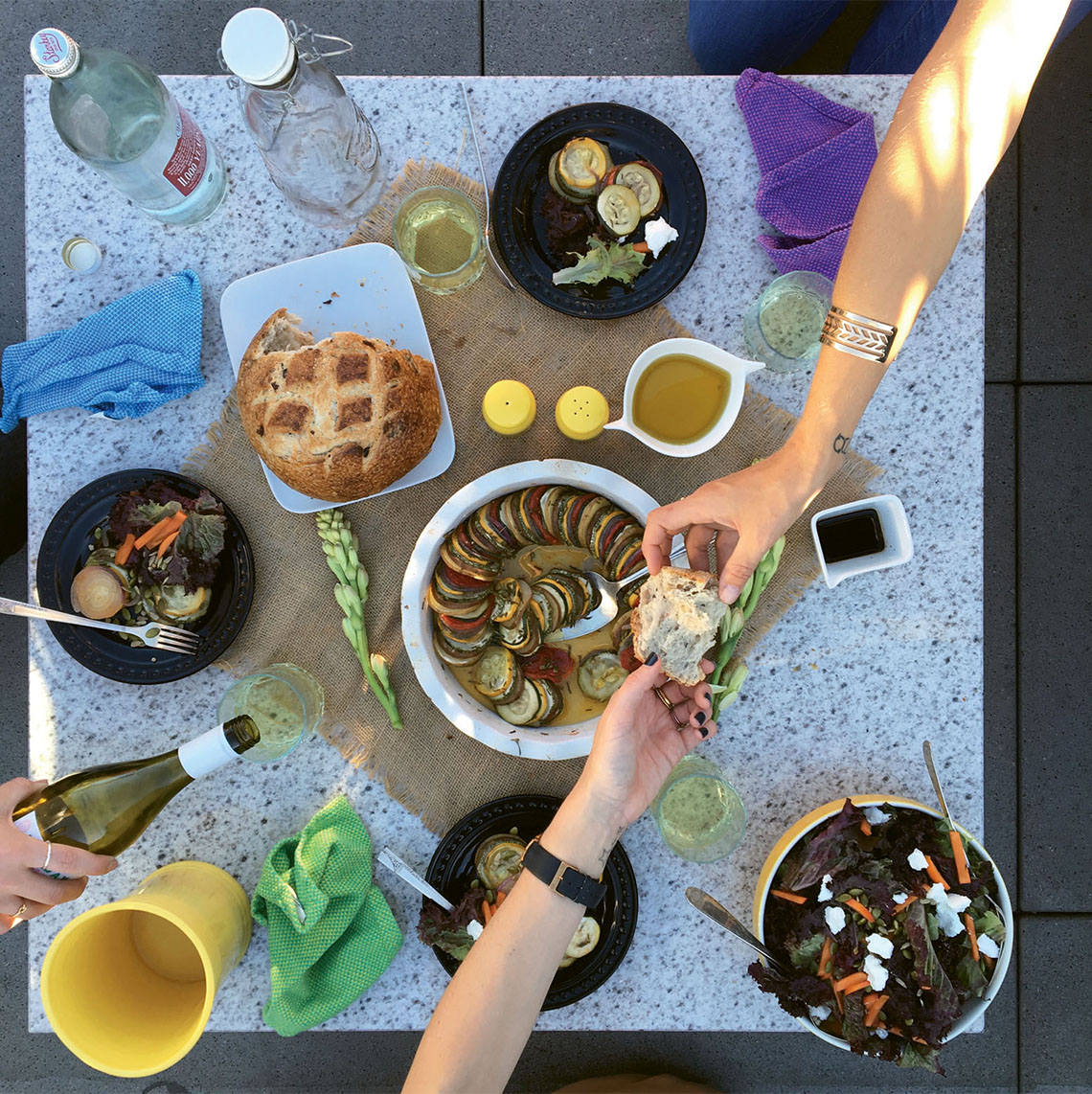 Our Experience concluded on the rooftop deck of Goldfinger’s modern apartment complex in Venice, where she’d prepped a spiral vegetable tian (a colorful medley of layered roasted vegetables), a salad and a cheese board along with a couple of bottles of wine, wine glasses, tablecloths, plates, napkins and silverware. Each participant was given the chance to set up and rearrange all of those components to compose his or her ultimate food-beauty shot, while on the other side of the roof deck, a shirtless gentleman happened to be silently meditating while sitting cross-legged on a lounge. It was something straight out of Central Casting.

Indeed, the Experience was not without its unscripted moments. Shortly after Goldfinger began her tutorial with us on the Santa Monica bluffs, a homeless man started yelling in our direction and continued the verbal barrage for about three minutes before losing interest and walking away.

“Welcome to Santa Monica,” said Goldfinger, smiling and unfazed.Rosewood Hong Kong will open in 2018.The Constellation is expect to sail in May.Chinese tour operators during a photo op at Levi’s Stadium in Santa Clara, Calif., on a Brand USA-sponsored fam trip.

Airbnb to Activist Investor Bill Ackman Offering to Help It Go Public: Thanks, but No Thanks