For my first trip to Alaska, four years ago, I packed several jackets, though I’m quite certain that none had lapels.

So whereas packing for that trip was all about being prepared for the weather conditions I expected to encounter during a late spring in the 49th state, for my recent return at roughly the same time of year, I also made sure to pack a sport coat, suit and tux — as one does for a sailing with Cunard Line.

This year marked a return to Alaska for the cruise line and the inaugural Alaska season for its 2,081-passenger Queen Elizabeth, which launched in 2010 and aboard which I made the journey from June 10 to 20. Next year the line is planning a full Alaska season, building upon lessons learned during this abbreviated season and, as always, striving to balance a sense of place with Cunard’s signature White Star Service.

In terms of onboard entertainment, that means Cunard standbys such as music-and-dance productions in the ship’s 830-seat Royal Court Theatre, which offered some of the best sightlines and sound I’ve ever experienced, on land or sea.

During my sailing, I particularly enjoyed the Palladium Nights revue, with the production’s talented dancers and singers evoking swinging ’60s London and beyond. A duet on Dusty Springfield’s “Son of a Preacher Man” showed off the range of the production’s female singers, who seemed to relish the opportunity to let loose with some soulful vocal runs; a Tom Jones medley did the same for the two male singers, and “It’s Not Unusual” in particular offered a fun approximation of the Jones experience, complete with pelvic thrusts aimed at the ladies in the front row.

Earning a standing ovation a few nights later was the Russian duo Aura, whose wordless interpretive dance told a tale of a romance from courtship to infidelity to happiness rekindled, all with Cirque-style acrobatic feats that drew gasps from the crowd.

Entertainment with a more regional flair was on offer throughout the journey, as well. Folk duo Cassie and Maggie from Nova Scotia regularly entertained guests in the Garden Lounge on Deck 9 and took the headlining gig one night at the Royal Court Theatre. The Alaska String Band boarded in Juneau to offer guests a taste of its rootsy bluegrass sound.

By day, programming in the theater generally took on a more educational bent. Lecturers such as William Lokey offered historical context for the ports we’d visit; for one of his lectures, for instance, Lokey gave an overview of the 1896 Klondike Gold Rush and its enduring impact on the U.S.

Rachel Cartwright, the sailing’s onboard naturalist, gave several presentations on the wildlife we’d encounter over the course of our trip. She also made herself available for informal chats in the Garden Lounge.

“Our lectures take a lot of time and resourcing, and you can tell by the attendance that guests really want it,” said Paul O’Loughlin, entertainment manager. “The guests want knowledge; they don’t just want to see, they want to understand.

“We want to really put Alaska at the forefront of the daytime programming,” O’Loughlin said.

Likewise for executive chef Mark Oldroyd, putting Alaska at the forefront of the ship’s culinary offerings while continuing to feature Cunard classics was the goal for this season’s sailings. 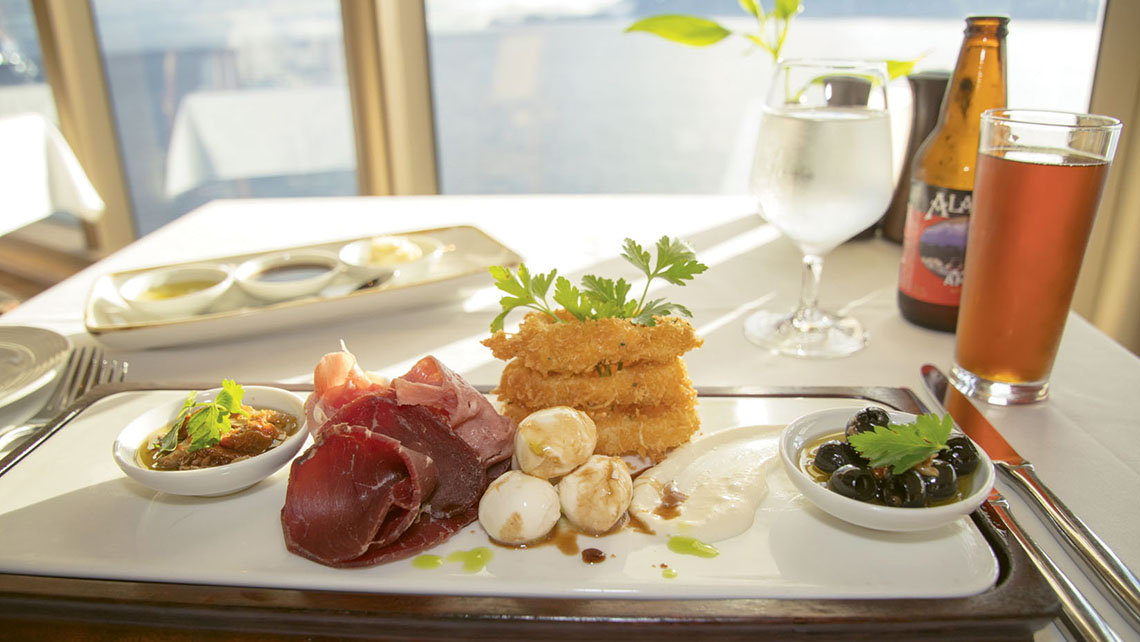 An antipasto course at La Piazza; the Italian menu was one of several cuisines served on a rotating basis in the Queen Elizabeth’s alternative-dining venue. Photo Credit: TW photo by Eric Moya

So while the first of two black-tie nights offered quintessentially British dishes such as beef Wellington and sticky toffee pudding, barbecue salmon was also on the menu; other evenings likewise showcased regional items such as reindeer. An afternoon seafood buffet brought throngs to the Deck 9 Lido deck with the allure of mountains of king crab legs, several salmon dishes (varying in both species and preparation) and more.

“We all know what Alaska’s famous for: salmon and crab and seafood and freshness,” Oldroyd said. “We want to make that a key feature: Come and taste Alaska.”

On more laid-back evenings, I sampled other dining options. One big highlight was dinner at the Golden Lion Pub, which poured familiar U.K. brews such as London Pride but also stocked a selection of bottled beers from the Alaskan Brewing Co. (as did most bars and restaurants onboard). One appetizer, the sesame-crusted Norfolk duckling, was one of the best versions of Peking duck I’ve ever had, and that’s coming from a former China expat.

The Steakhouse at the Verandah, one of two additional-charge venues, served classic steakhouse fare, from ribeyes to creamed spinach to cheesecake. The other additional-charge venue offered a menu that rotated between Asian fusion (Bamboo), Indian (Coriander) and Italian (La Piazza) themes; on one of the La Piazza nights, I enjoyed a seafood pasta prepared tableside with a beyond-generous portion of scallops and shrimp.

All of these onboard offerings, of course, are in service to the main attraction. 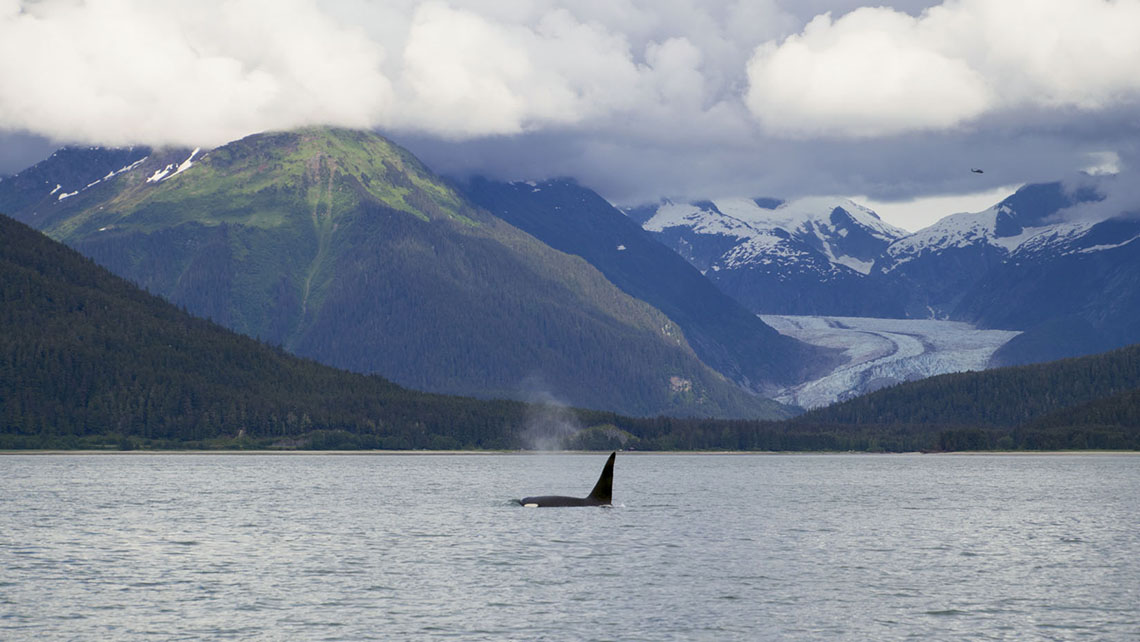 An orca spotted in Stephens Passage during a shore excursion in Juneau. Photo Credit: TW photo by Eric Moya

“Alaska is quite port-intensive; it’s a lot busier than the Caribbean,” said food and beverage manager Glenn Milway as we watched the 75-mile-long Hubbard Glacier come closer into view during a day at sea. “Here there’s a lot more to do: the glaciers, whale-watching, fishing, hiking, you can go on the trains.”

Milway anticipates that next year’s Alaska season will see some tweaks based on the line’s experience this year — he is especially eager to take greater advantage of the salmon-fishing season to maximize guests’ access to fresh seafood. But otherwise, he said, for Cunard’s return to Alaska after a decades-long absence, “To be honest … we’ve got a lot right.”

Pricing tactics vary by sector as consumers return to travel