As soon as we anchored off Bora Bora, I could see it in my mountain-loving husband’s eyes. He really wanted to climb those famous peaks.

They certainly wouldn’t be any taller or steeper than many of the mountains we have climbed in New Mexico and Colorado. But alas, some quick Google research warned of the dangers of doing it without a guide and noted that guides won’t even go when it’s been raining.

It had been raining and was about to again, so we quickly scratched that idea. But all was not lost. We took the tender to shore and decided to rent bikes to cycle the 19-mile road that loops the island.

We started off in a light rain shower, enjoying the cool break and looking at the island homes and miles of empty beaches. It wasn’t until about 10 miles in, with a big hill looming, that I realized our crucial mistake. We were on heavy cruisers, those one-gear bikes meant more for riding around the neighborhood than on hills and multimile treks.

Oh, well; the only choice was to make a beer and swim stop. It certainly was a great way to see the island, which is surprisingly undeveloped other than its famous, mostly offshore luxury resorts with their overwater bungalows.

It was the third stop on our seven-day, pre-Christmas cruise from Tahiti through the Society Islands onboard the Paul Gauguin. I had only been to French Polynesia once before, early last year, when I visited Tahaa, Raiatea and the Brando (the luxury resort developed on an atoll Marlon Brando purchased after filming “Mutiny on the Bounty”), all via short flights from Papeete. I fell in love with them all and decided the best way to see more of the islands would be from the comfort of a small luxury ship to avoid wasting time on airports and the constant repacking and other hassles of changing hotels.

I’ve always heard great things about Paul Gauguin Cruises. Still, as I do before every trip, I tried to tamp down expectations, especially given that the Paul Gauguin has been sailing Polynesia for 20 years. But it did not disappoint. Everything about the ship was impeccably maintained. And I really liked the classic feel of the cabins. No, there weren’t USB ports next to the bed. But that just made it easier to maintain a distance from the devices.

The view from the top deck of the Paul Gauguin anchored off Huahine, a lush, sparsely populated island in French Polynesia. Photo Credit: TW photo by Jeri Clausing

Our C-class cabin was the average cruise ship size, although very well laid out and classically but simply decorated with a surprising amount of storage space. The bathroom had a full-size bathtub, and there was a small love seat and table between the bed and the balcony.

Best of all there was a desk/vanity area on my side of the bed and more counter space above the minibar and shelves on my husband’s side, enabling us to declare dedicated personal spaces and keep our clutter, or lack thereof, separate — an important feature when traveling in such close quarters.

I was especially impressed with the food and service. I felt like I was on a small version of the Crystal Serenity, with its classic feel and top-notch cuisine and staff. After the first day, everyone remembered our names, and we never waited for anything.

In addition to the main dining room, the ship has two specialty fine dining venues, La Veranda and Le Grill. Although they require reservations, there is no surcharge, and we never had a problem getting a table for two in any of the restaurants.

As it turns out, sailing an all-inclusive line like Paul Gauguin is also more cost-effective than one might realize, given that prices at luxury resorts can include $24 margaritas and $40 hamburgers.

Perhaps the best part of the trip — besides the beauty of the islands, of course — was our fellow passengers. With a capacity of just over 300, we met adults of all ages and all backgrounds. The one common theme: They were all well-traveled, well-informed and very interesting to talk to.

Our first stop was the island of Huahine, a very small, lush and sparsely populated island where we easily found a quiet beach to relax on.

Next up was Tahaa, a small island accessible only by boat from Raiatea and one that only smaller ships like the Paul Gauguin can access. Paul Gauguin Cruises also owns its own motu, or islet, where it hosted an afternoon barbecue. There were plenty of chairs and shade as well as kayaking and snorkeling.

Although the line offers a host of excursions at each stop in addition to kayaking, paddleboard and scuba diving from the ship, we aren’t very good group travelers and spent most of our days wandering by ourselves. We kayaked at Tahaa, hiked Magic Mountain on Moorea and went deep-sea fishing with four others off the coast of Moorea. 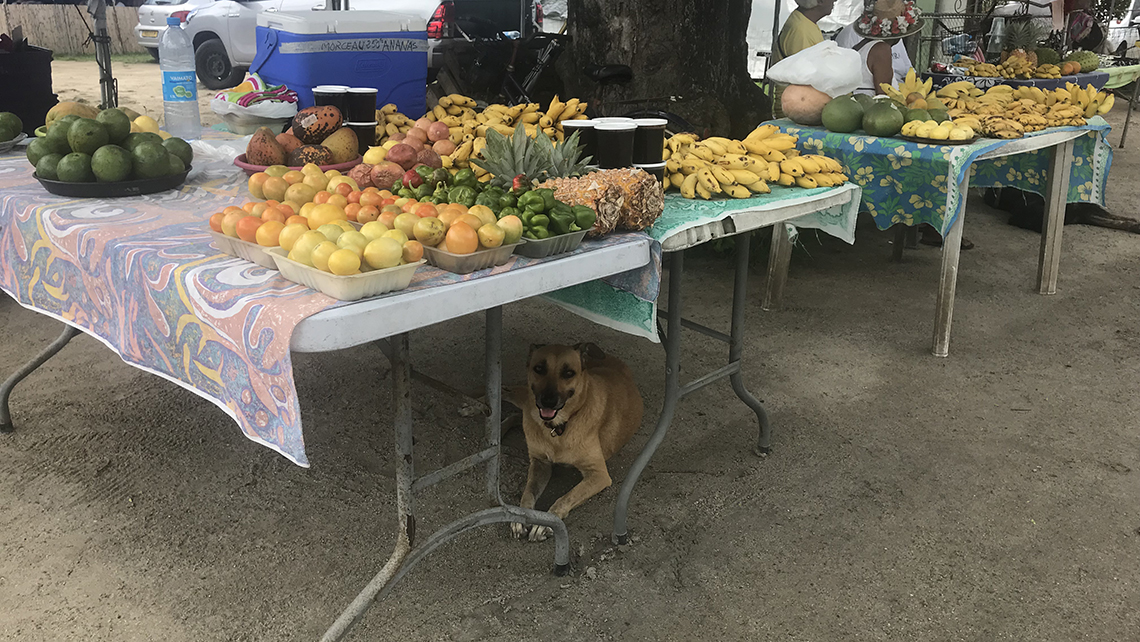 Fruit for sale at a market on Bora Bora. Photo Credit: TW photo by Jeri Clausing

Throughout the cruise, it was easy to see why Tahiti and Bora Bora were among the world’s original “exotic” destinations. And even after all these years, the islands, perhaps with exception of the more populated areas of Papeete, still feel very underdeveloped and authentically Polynesian.

While there were a few shops and vendors at the different ports, none of the islands was overrun with cheap souvenir shops or gaudy tourist attractions. And during the entire week, we saw just one other ship, crossing paths one day in Bora Bora with a Fred Olsen cruise that was making its way from the U.K. to Australia.

The first response I got from just about everyone I told that I was going to Tahiti was, “Isn’t that far?”

If you live anywhere west of the Mississippi, the travel time is no longer than going to Europe, with eight-hour, nonstop flights from Los Angeles (on Air Tahiti Nui and Air France) and, just recently, from San Francisco on United and French Bee. We flew Air Tahiti Nui to experience business class, both on their new Boeing 787-9 Dreamliner as well as on one of their older Airbuses.

The Dreamliner, delivered in November, still had its new-plane smell as we settled into our comfortable pods with their lie-flat seats, only half-joking when we agreed that it was too bad that the flight, departing at 9 p.m., wouldn’t be just a few hours longer to allow us to get a full eight hours’ sleep after dinner and Champagne. The plane is the first of four the airline is getting to replace its aging fleet by the end of 2019.

Still, despite their age, the old planes are still a definite cut above most domestic carriers when it comes to service, cleanliness and comfort, both in business class and economy.

Karnataka hill stations that are a perfect summer escape

Majority of Brits, Germans and French Would Skip Holidays if Masks and Testing Required: New Survey