Abercrombie & Kent (A&K) is celebrating 30 years of expedition cruising next year. And to mark the event, it is offering luxury travelers one more trip to check off the bucket list: a cruise through the little-traveled Northeast Passage.

A&K co-founder Geoffrey Kent and his wife, Otavia, will host the 26-day sailing, which Bob Simpson, director of the company’s expedition cruising division, said will sort of “tie the knot on the Arctic.”

“We’ve been doing the Northwest Passage for the last five years,” Simpson said. “That’s been very successful. … Some of the guests I know that are going to be on the trip have done most of all of our other programs, including the Northwest Passage, so this will be an opportunity to kind of complete the whole route of the Arctic.”

Having Kent onboard, he said, “really puts the cherry on the cake.”

“It sort of brings full circle what we’ve been doing for years. … He was the guy that really started it all when we acquired the Explorer in the early ’90s and started operating this program. That was his sort of vision, to continue to these places. This is really the last great itinerary that we haven’t done. So we’re really excited about it.”

Quark Expeditions made the first passenger cruise through the Northeast Passage in 1991. Hapag-Lloyd, Poseidon, Aurora, Heritage and Silversea are among the companies whose ships have taken the route in recent years. Although none sailed this year with passengers because of the pandemic, Ponant repositioned the Le Boreal through the Northeast Passage (without passengers) in August.

On average, Simpson said, going forward, two to four passenger ships will make the full passage each year during a small window in August and September.

A Prestige Suite on Ponant’s Boreal, the ship A&K will use for the cruise.

A&K, which no longer owns the Explorer and now uses Ponant ships for all of its expedition cruises, will sail Ponant’s Boreal. Another Ponant ship is scheduled to sail three to four days behind, which will keep the ships and passengers secluded while also enabling the ships to provide mutual aid should either encounter problems, Simpson said.

Also joining the team are Steffen Graupner, a renowned climate-change scientist who has explored and researched extensively in the region, and Kiliii Yuyan, an award-winning National Geographic photographer of Siberian descent who specializes in photographing indigenous people.

It will also visit Russia, with stops in Murmansk, the world’s biggest city north of the Arctic Circle, and Provideniya, a former military port.

Other highlights include Wrangel Island, a Unesco World Heritage Site recognized for its vast biodiversity, including 400 species of plants, walruses and bird life.

Wrangel Island, Simpson said, is also known for having the highest number of ancestral polar bear dens in the word.

“Steffen has told me he’s been on expeditions at Wrangel where they have seen in a single day over 200 polar bears,” Simpson said. “There’s no other place in the world where you’re going to find that.” 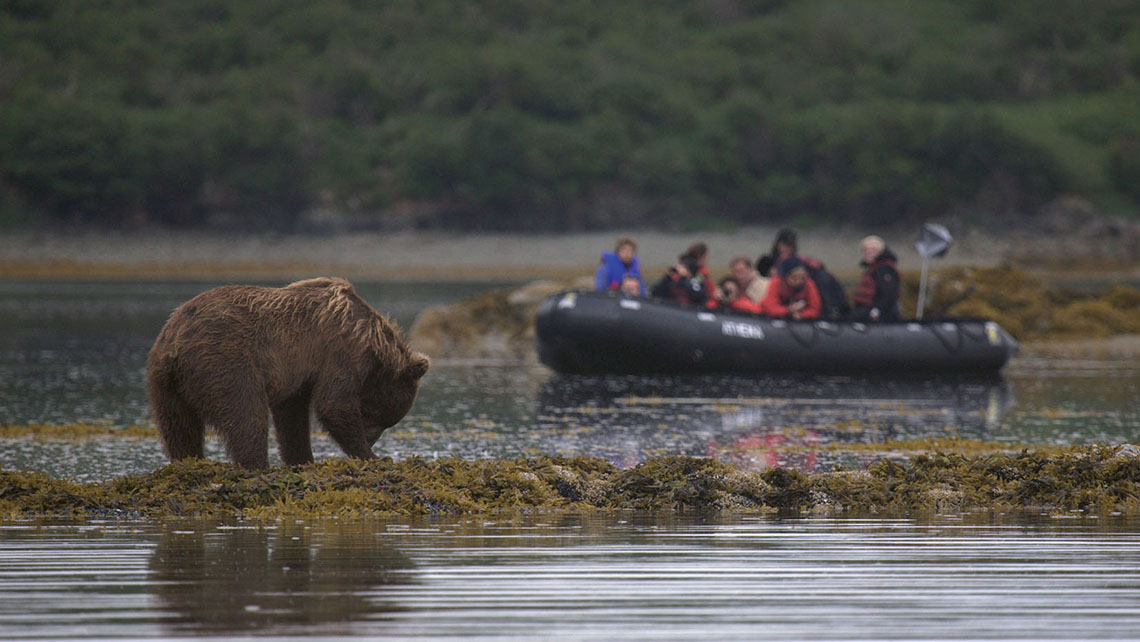 The cruise will also stop at the Great Arctic State Nature Reserve in the Kara Sea, which spans more than 16,000 square miles and is home to polar bears, Arctic foxes, reindeer, beluga whales and more.

Like other Antarctic and Arctic sailings, the exact schedule will depend on the conditions.

“In this rarely transited, vast wilderness, each day’s activities are determined by the captain and expedition leader based on ice, weather and sea conditions — as well as knowledge gained from years of experience,” Kent said in a release announcing the anniversary trip. “That’s the appeal of expedition cruising: the unpredictability (and thrill) of adventure.”

The Northeast Passage: Across the Russian Arctic With Geoffrey Kent is scheduled to run Aug. 27 through Sept. 2. Prices start at $36,995 per person.