It was a Friday night, and I wasn’t sure I was hip enough to blend in with the crowd at Fabrica de Arte Cubano, an art gallery-slash-nightclub that has emerged as ground zero for Havana’s burgeoning “Brooklynization.”

The venue was one of many stops on a custom weekend tour with Cultural Cuba and decidedly different from the day’s earlier activities, which had included a visit to a local preschool for disadvantaged youth.

Surrounded at the entrance by tall security guards and a horde of well-dressed twenty-somethings, Fabrica de Arte Cubano, or FAC for short, gave off an air of exclusivity. I assumed it to be a typical tourist hot spot, where foreigners and wealthy Habaneros could go to see and be seen, all under the pretext of patronizing local artists.

A few minutes after entering, I realized I was way off the mark.

But rather than catering only to well-heeled bohemians, FAC aims to be egalitarian. Entrance fees are kept intentionally low, at around CUC$2, to ensure the venue remains accessible to locals. (The Cuban Convertible Peso, or CUC, is the currency that visitors are required to use and is pinned to the U.S. dollar value. In Cuba, the average government employee salary is just CUC$43, or around 1,067 Cuban pesos, a month.)

This inclusive approach translates into a refreshingly unpretentious atmosphere, where contemporary art and music can be enjoyed by young and old, rich and poor, Cuban and non-Cuban alike. 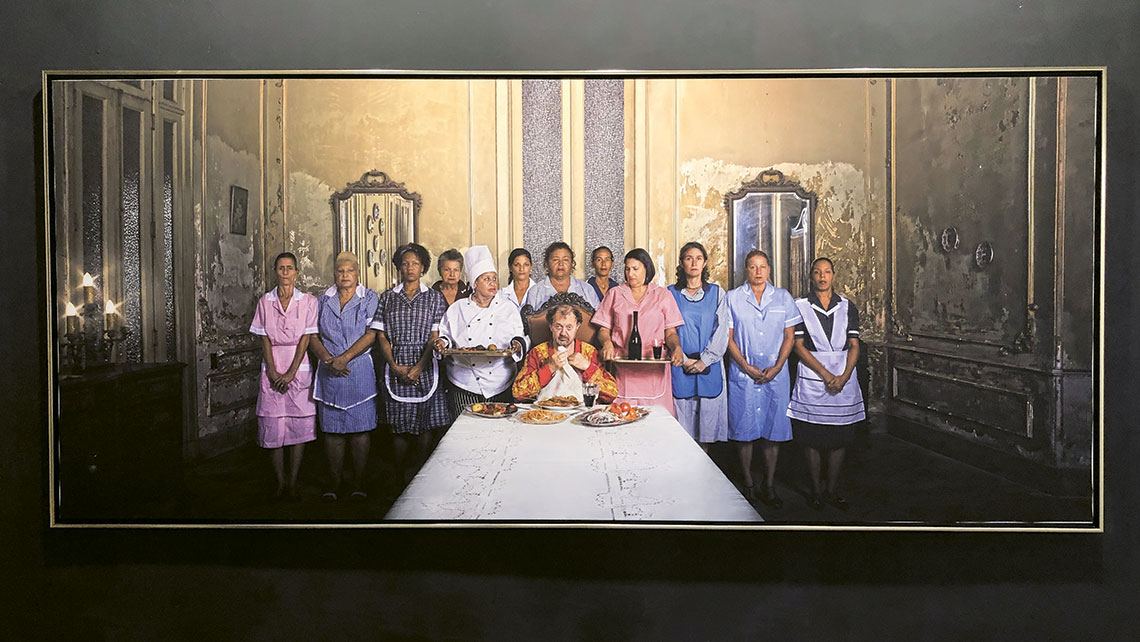 During my visit in early November, one of the gallery’s main draws was an exhibit featuring work by Enrique Rottenberg, an Argentine-born Israeli who emigrated to Cuba in the early 1990s. His photography regularly incorporates self-portraiture, which made it easy to spot Rottenberg himself in the gallery later that evening, surrounded by star-struck admirers hoping to snap a photo.

Elsewhere at FAC, a jazz group played on a small, tucked-away stage, while in a larger, more cavernous space a crowd milled about and swayed to Afro-Cuban rhythms as they waited for a live music set to start.

FAC’s bar and restaurant scene was similarly vibrant. Affordable food and drink options are plentiful throughout the complex, but the venue’s standout eatery is Tierra, a small paladares, or privately run restaurant, in the club’s VIP area. Tierra’s diners are primarily foreigners, and the restaurant’s menu features globally inspired offerings like baba ghanoush and hummus, traditional Portuguese beef dish bife a Portuguesa and a Spanish dessert called torrejas.

Our group left FAC completely blown away. The venue seemed emblematic of a new chapter gradually unfolding in Cuba, driven not by revolution but by cultural evolution.

On our last day in Havana with Cultural Cuba, we stopped by Dador, a Cuban fashion brand and clothing boutique. The bright, airy store, which features high ceilings and white walls, is stocked with pieces that are proudly Cuban made, all designed and sewn in-house.

There, we were met by Dador co-founder Lauren Fajardo, a Cuban native who, after an eight-year stint in New York, decided to move back to Havana permanently in 2016. Like us, she had been astounded by the city’s transformation upon her return.

“I started to come back for a documentary project and started staying for longer periods of time,” said Fajardo. “Then, at one point, I decided I wanted to be here because I saw a totally different Cuba. And none of it existed when I was growing up. All the restaurants and bars, they didn’t exist back then. We used to just head to the malecon with a bottle of rum and hang out. We never dreamed the city could be like this.”

Israel to exhibit at Arab Travel Market next spring