Possibly the most well-maintained ship in the world, the luxury vessel Europa 2 was in Miami recently where I got a chance to take a tour.

Not even 5 years old, the Europa 2 has already been through its second drydock and has emerged with several new lounge and bar areas, a redesign of the spa area and its very own minimuseum.

The 516-passenger Europa 2 is aimed at an international clientele, not just the German speakers who patronize Hamburg-based Hapag-Lloyd Cruises, which built the ship in 2013 for $360 million.

Hapag-Lloyd is eager to diversify beyond its core market in Germany and has designated the Europa 2 as a ship that will accommodate luxury guests no matter what their nationality or language skills.

In a recent shipyard stay in Hamburg, nine areas of the 42,830-gross-ton ship were changed, the line said.

A veranda suite on the Hapag-Lloyd Cruises ship.

Another area given a makeover was the Europa 2’s gin bar, which had previously been called the Herrenzimmer (Den) bar but is now called the Collins and features clubby leather chairs and a retro component stereo system, complete with a turntable and a collection of vintage LPs.

The bar has 45 varieties of gin, the most at sea, according to a spokeswoman. There are complimentary gin tastings offered on every cruise.

In another change, the club for teens has been separated from the play area for children, moving from Deck 8 to Deck 4. The new club has foosball and pingpong tables, upholstered window nooks and wall shelves fashioned out of skateboards for books and videos.

Kids under 8 sail free on the Europa 2, while those age 8 to 18 are charged about one-quarter of the adult fare. There are seven family apartments on the ship, and Hapag-Lloyd has a soft limit of 20 to 25 for the number of kids on each voyage, a spokeswoman said.

The teen club was carved from Deck 4 space that used to be devoted to a private restaurant. In another change, the former Jazz Club has been renamed Club 2. New seating has also been added to the Italian restaurant Serenissima. 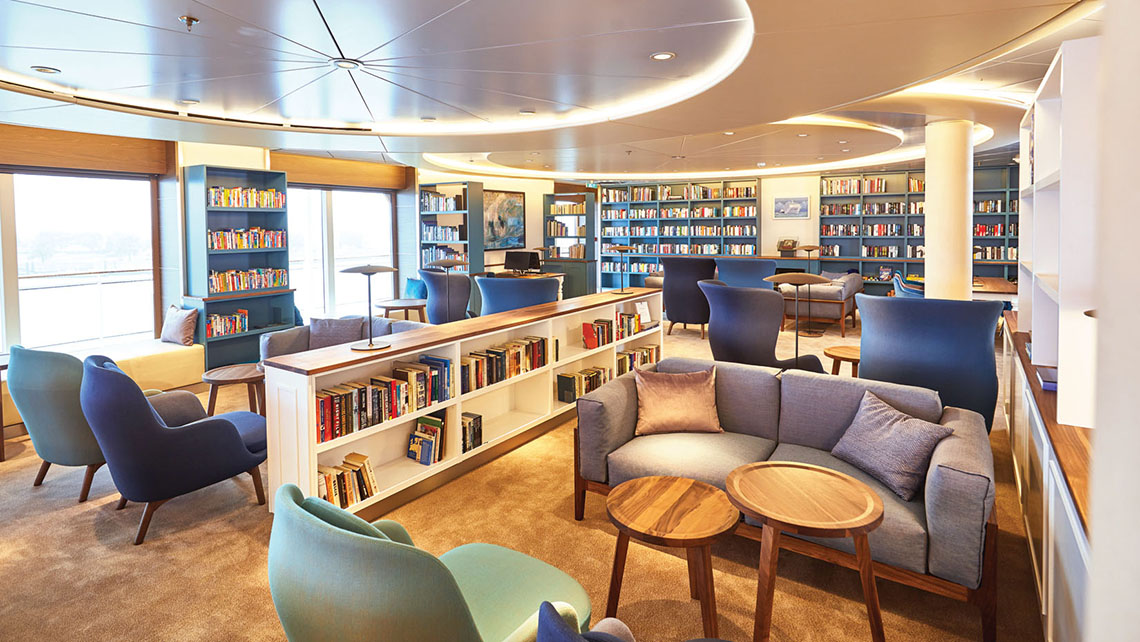 The ship’s library has been relocated to the Belvedere room, opening space for a future cruise sales center.

On Deck 9, a suite of rooms toward the bow of the ship has been redone. The former library space has been converted into a future cruise sales center, while the library has been moved into a remodeled Belvedere room, which now includes a coffee bar with an Italian La Cimbali espresso machine.

Another addition, in a corner of the future sales center, is a small museum with display cases for Hapag-Lloyd artifacts and mementos, such as advertisements, menus and knickknacks from older ships that sailed for the line or its predecessors, Hamburg American Line and Norddeutscher Lloyd.

A new studio has been carved out of the former auditorium space. It will be used for workshops, talks, movies and yoga classes.

Finally, the bandwidth capacity of the ship’s communications system was increased, allowing Hapag-Lloyd for the first time to provide internet access that is free for at least an hour a day to all guests. 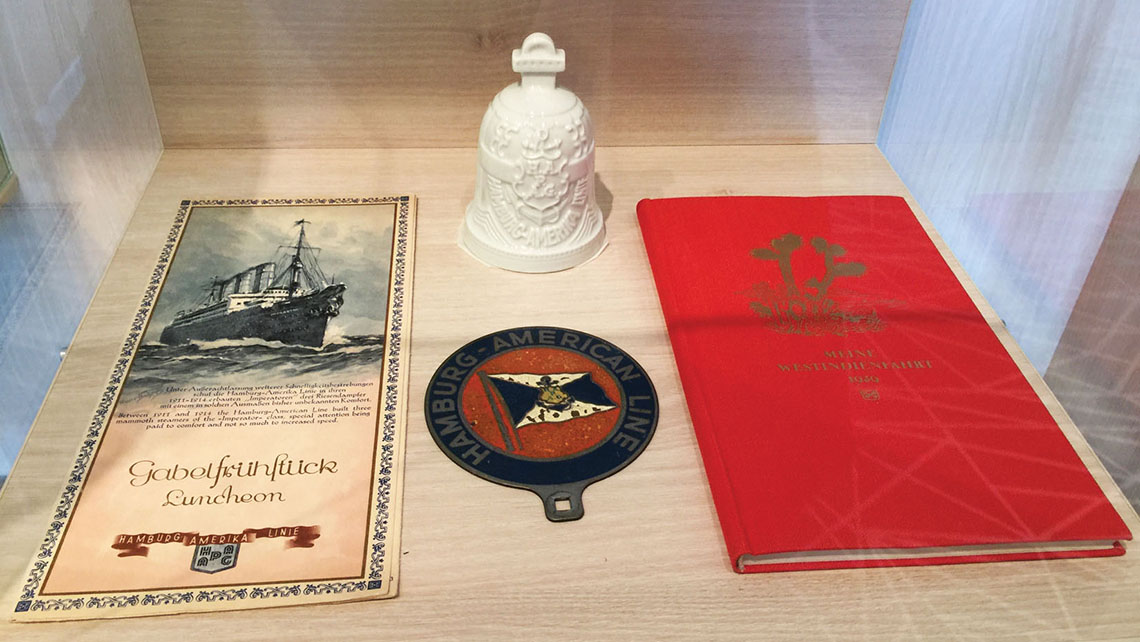 What hasn’t changed is the overall feel of the ship, one of spaciousness. Despite being only one story, the foyer/piano bar area where passengers embark seems expansive. The ship’s space ratio of 83 gross tons per passenger is higher than that of ships from other luxury lines such as Regent Seven Seas, Seabourn or Silversea Cruises.

Also relatively unchanged is the restaurant lineup. The main dining room, called Restaurant Weltmeere, is circular in shape, with tiers of tables arranged around a central well. It is flanked by Serenissima and Elements, an Asian restaurant. Nearby, on Deck 4, is Tarragon, a French bistro.

The Yacht Club buffet restaurant on Deck 9 has an extensive outdoor area for seating plus a wing devoted to sushi.

Currently sailing a crossing from Buenos Aires to Cape Town, South Africa, the Europa 2 travels the globe and does a variety of cruises themed to families, fashion, relaxation, fitness, art and contemporary music. 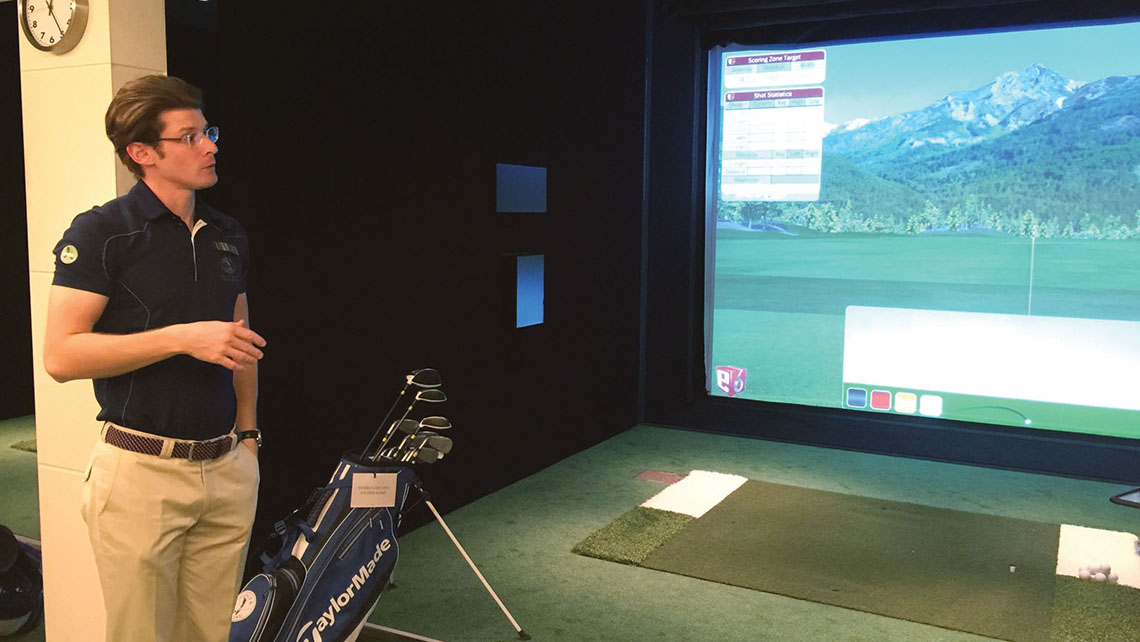 One of two golf simulators on the Europa 2. The ship employs multiple golf pros on some cruises. Photo Credit: TW photo by Tom Stieghorst

Also popular are golf-themed cruises. The Europa 2 has a resident pro, and on themed cruises there is more than one. The ship has a pair of golf simulators that allow guests to virtually play 50 top courses around the world.

The line’s policy is to reserve 10 to 15 suites on each cruise for international guests, holding them open until eight to 10 weeks before a cruise if they’re unfilled. German speakers tend to book the ship two years in advance, a spokeswoman said.

The itineraries most popular with North Americans tend to be those close to home, such as in the Caribbean and the Mediterranean, she said.