ABOARD THE NIEUW STATENDAM — The $4 million art collection
on Holland America Line’s newest ship mostly relates to music, one of the
overriding themes of the ship class that started in 2016 with the Koningsdam.

Most of the art on Nieuw Statendam relates to music. These cymbals are beneath a staircase in the main dining room. Photo Credit: Tom Stieghorst

Whether it is photographs of the insides of musical
instruments or abstract art inspired by sound waves or oversized depictions of
17th century violins made of Delft ceramics, the Nieuw Statendam is a treat for
lovers of music and art.

The ship’s collection includes work from 180 artists and was
assembled by two art consultants, London-based Artlink and Norway’s YSA Design.

Nieuw Statendam is the fourth ship ArtLink has worked on, and
the second for Holland America Line (the other two are Seabourn ships).

“There are five more in the works,” said Artlink
founder Tal Danai.

The biggest work of art, which is also on the Koningsdam, is
the 7.5-ton sculpture in the ship’s atrium that is meant to suggest a harp. The
work, which spans three decks, was built in 24 pieces in China and assembled on
site, fastened to the atrium at only six points. 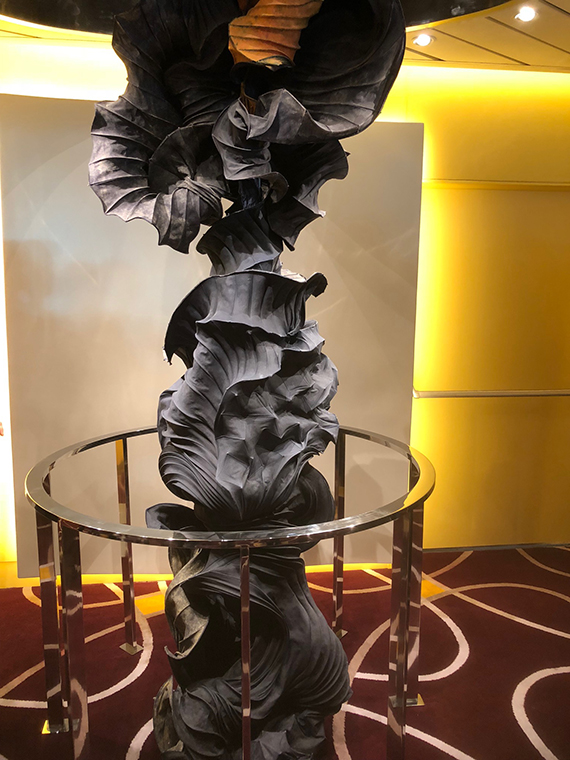 This sculpture, which spans two decks through an opening in the main dining room ceiling was inspired by sound waves. Photo Credit: Tom Stieghorst

One of the most prominent artists represented on the ship is
Peter Gentenaar, who created a 19-foot tall paper sculpture that hangs through
an opening in the floor of the two-deck main dining room and weighs just 24
pounds.

The sculpture is made of custom-milled fire-retardant linen
paper stretched over ribs of bamboo and is intended to be an abstraction of
sound waves.

Another artist takes photos of objects meant to resemble a
17th century Dutch still life. Each photo features a period musical instrument
that the artist built himself.

Another whimsical piece is a surfboard wrapped in cherubs
painted in the style of Raphael. Another piece is a 1970s-era boombox (first
developed by the Dutch firm Phillips) covered with Louis Vuitton logos. 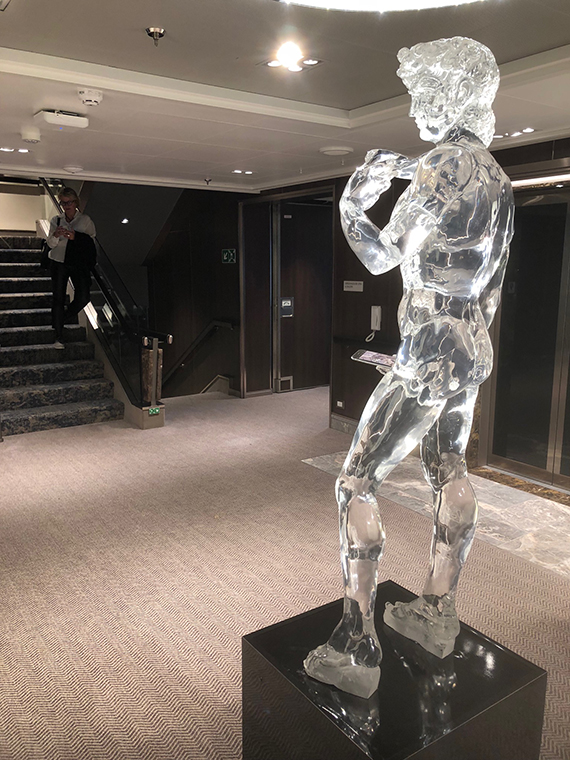 This translucent resin copy of the David statue with a cell phone is a social media favorite on Nieuw Statendam Photo Credit: Tom Stieghorst

The works of over 60 artists are displayed in the ship’s
three stair towers. Each tower is themed, in part, to give guests an idea of
where they are in the ship as they traverse the towers.

The aft stairs are themed to fashion, the middle stairs to
music and the forward stairs to “art history with a twist.”

One of the most popular items in the elevator lobby of one
deck on the forward stair tower is a 6-foot copy of the famous David statue by
Michelangelo crafted from clear resin. The twist is that the statue is holding
an iPhone in its right hand.

Ship personnel said that the statue is attracting many
guests and crew who want to take selfies with the translucent David to post on
social media.

Here’s how you can display your art on Burj Khalifa