Fathom is nothing if not novel. The new social-impact cruise line from Carnival Corp. is unlike anything else I can think of in the cruise industry in a number of ways.

Escape has been central to the idea of a cruise vacation: a way to literally get away from land-based concerns and luxuriate in an atmosphere where service and leisure are paramount.

Fathom constitutes something different. It turns service on its head, making the passengers the ones providing it to residents of the Dominican Republic.

My stint on Fathom’s inaugural cruise felt like a cross between a Teach for America training seminar and a wholesome party in some tropical Caribbean location.

The first novelty on a Fathom cruise is the impact activities, a half-dozen projects that Fathom’s leaders have organized in partnership with several nonprofits already working in the D.R.

After cruising from Miami to Carnival Corp.’s private pier at Amber Cove, passengers fan out on various trips to the hills and rural country surrounding Puerto Plata.

They know coming into the cruise they will be planting trees, helping schoolkids learn English, doing the grunt work at a chocolate-processing plant and pouring concrete floors in homes that have none, among other projects.

I participated in the reforestation project by gathering royal palm sprouts from the forest floor and packing them in lunch-size plastic bags of compost to await planting by future Fathom volunteers.

The idea was to help restore an area previously denuded by slash-and-burn farming.

I can’t say it was fun. But many of my fellow passengers expressed a satisfaction in the camaraderie and the sense that they were making a difference in a country with clear economic needs.

“I’m learning and bonding with my fellow travelers,” said passenger Joy Steinberg, who blogs about philanthropic travel at GiveJoy.me.

It represented a lot of goodwill, as our Dominican guides emphasized over and over again.

Fathom is also novel in that it doesn’t travel from place to place but stays docked at Amber Cove for three days. That appealed to passenger Liz Spaeth-Werner, a recently retired water engineer from West Bend, Wis., who said she never liked the nomadic aspect of cruising.

“I wanted to be at just one location,” Spaeth-Werner said. “That was so attractive.”

Another unique feature of Fathom is its itinerary rotation. The line’s only ship, the Adonia, will go one week to the D.R. and the next week to Cuba. The two cruises have different programs. In Cuba it is cultural immersion, while in the Dominican it is social-impact activities, mixed with excursions such as snorkeling, hiking and visiting museums.

The ship has tropical cocktails available, such as the Santo Libre (Dominican rum and lime juice) and the mojito (rum, lime juice, sugar, mint and soda) as well as a Caribbean/Latin specialty restaurant, Ocean Grill, overseen by Dominican chef Emil Vega.

But it’s dominated visually by the dark wood paneling and classical details of its original 16-year-old design, features that don’t add any of the atmosphere of the Caribbean. 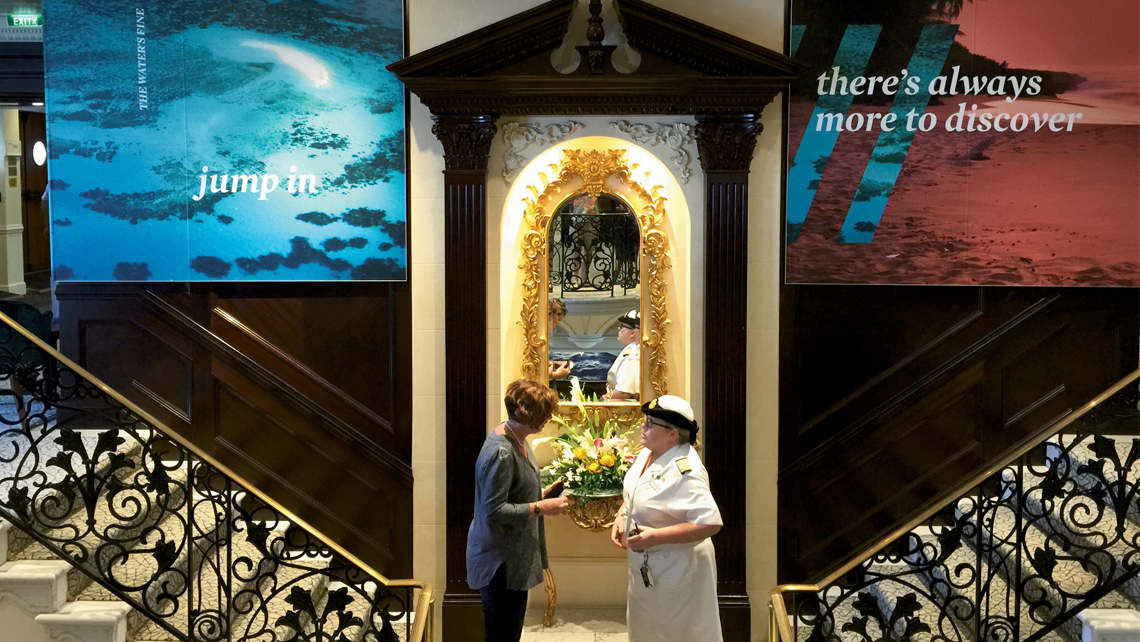 Consultants working for Fathom decided not to “compete” with the old design scheme, said Mark Buchalter, a design director with the Seattle branding firm Hornall Anderson.

A few unique touches announce the Fathom brand. A 5-by-10-foot display of postcards called “Note to (Future) Self” lets passengers jot down highlights of their cruise to mail home.

There are Curiosity Boxes scattered around the ship. One I opened had a stack of cards with two true and one false statement about Cuba. Elsewhere, large color photo panels with slogans such as “There’s always more to discover” convey Fathom’s philosophy.

Overall, the Fathom theming gently prods passengers to get involved and connects the dots between travel and inspiration.

Another way that Fathom is novel is the classes and workshops that passengers attend while at sea. Some are billed as mandatory; others are more like electives in college.

Passengers are divided into small groups to attend an intro session called “How to Be a Fathom Traveler.” The “cohorts” meet at least twice more over the weeklong cruise.

Each group member is asked to name a favorite destination and is paired with a stranger to say something bold they’ve done, an interesting fact about themselves and their conception of the key to happiness. It is participatory, interpersonal and a bit confessional, setting a tone for the rest of the cruise.

An optional workshop, “The Story of You,” is meant to strengthen storytelling skills. Passengers tell a personal story three times to three different people, each time getting some techniques from a trainer to make the narrative stronger, more vivid and more memorable.

Marketplace challenges proved too much for Fathom to overcome