When the company turns 25 next year, Randall Soy, executive vice president for sales and marketing, will be one of the few employees who has been with it since the beginning. Read More

Fifty years ago, a new name in travel was launched, along with a new concept for a vacation.

It was impossible to anticipate the outlines of today’s cruise industry in that beginning.

The line’s first ship, the Sunward, was a converted ferry of 8,666 tons that carried 558 passengers and offered none of the modern amenities or luxuries associated with cruising.

But after that first voyage on Dec. 19, 1966, travelers would begin flocking to the Caribbean, and travel agents would find a new source of income.

“I don’t think we would be talking about cruising today like we are had they not had that idea to be in cruising in the Caribbean 50 years ago,” said Brad Anderson, co-owner of Avoya Travel.

To mark the line’s 50th anniversary, Travel Weekly asked some agents to recall memorable moments in Norwegian’s history, events that were significant or shaped the line that passengers know today.

Norwegian was a pioneer in many areas of developing the cruise product. It was the first to have a private island, in the Bahamas, the first to package cruises with included airfare and the first to create a department for corporate and incentive sales.

It daringly bought the liner France for use in the Caribbean in 1979 but floundered until its acquisition in 2000 by what was then Star Cruises, now Genting Hong Kong.

It was the acquisition by an Asian line that led to what travel agents said was the most significant development in Norwegian’s history: the advent of Freestyle Cruising on the Norwegian Sky in 2000.

1966: First voyage of Norwegian Caribbean Line from Miami on Dec. 19.

The decade preceding the sale had not been auspicious. Norwegian was weighed down by debt dating to the $80 million conversion of the France into the Norway.

It acquired Royal Viking Line and Royal Cruise Line to no great advantage. There were layoffs, a revolving door in the executive suite and a scattershot marketing message. Norwegian also faced two dynamic competitors in Carnival Corp. and Royal Caribbean Cruises Ltd.

After Star Cruises completed its purchase in February 2000, there were immediate discussions about how to differentiate the brand, said Andy Stuart, then Norwegian’s vice president of sales, now the line’s president and CEO.

Star Cruises chairman KT Lim, having sailed on Western-style cruises in the early 1990s, decided that the rigid, two-seating dining format wouldn’t work in Asia because his customers would not show up on schedule, Stuart said.

Star’s dining was flexible, and Norwegian studied it and then opted to adopt it as a point of difference for its line.

“The operations team believed they could execute it on the existing fleet,” Stuart said. “And then the opportunity was [that] we would have the ability to design ships for it on a go-forward basis.”

The idea almost sank at first on the Sky, Stuart said, because no one had prepared the guests. 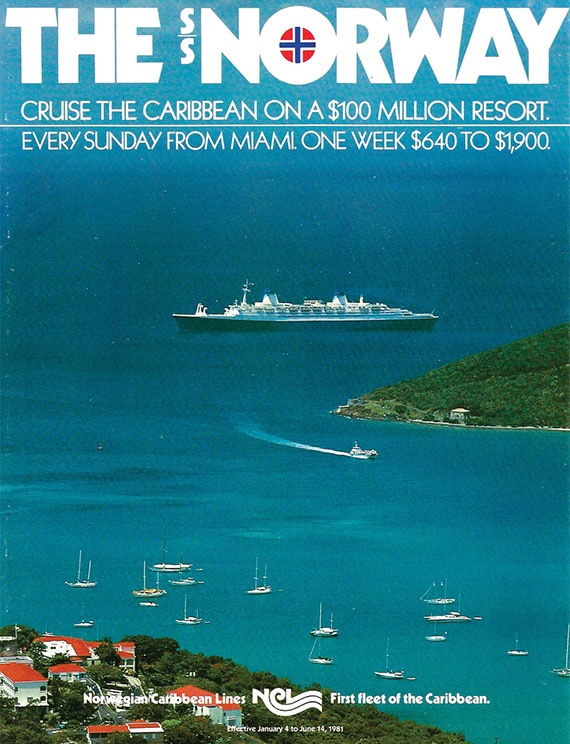 The Norway, acquired in 1979, was advertised by Norwegian Cruise Line as a $100 million resort.

“It was all based on the existing marketing, which was about first- and second-seat dining and so forth,” he said.

After a near-riot on the first cruise, Stuart said, guests were given the option of either set dining times or showing up when they liked.

“People started to take advantage of the new freedom and flexibility,” he said. “While people I don’t think knew Freestyle Cruising was what they wanted, once they were presented with the option, with the right tone, they were thrilled. And so was born the new experience.”

Ross Spalding, president of Crown Cruise Vacations, Princeton, N.J., said, “The creation of Freestyle Cruising has not only changed the thought of cruising from ‘my grandparents’ vacation’ to one the entire family can enjoy but also to one that lets me spend my vacation as I would like to, with whom I’d like to, doing what I would like to.”

Spalding and Rob Clabbers, president of Q Cruises + Travel in Chicago, also cited the creation of the high-end Haven enclave on many Norwegian ships as another milestone.

“It is a popular option for people who want to have a more upscale experience while still enjoying the amenities of a big ship,” Clabbers said.

Norwegian’s cultivation of cruises in Hawaii, starting in 2005, also stands out to Clabbers.

“It brought us new clients who wanted to explore multiple Hawaiian islands from the convenience of a modern cruise ship,” Clabbers said.

While the initial three ships in Hawaii proved too ambitious, Norwegian remains the only major cruise line in the market with the Pride of America.

Alex Sharpe, president and CEO of Signature Travel Network, said that the 2011 introduction of the Partners First program, coupled with de-emphasizing direct sales, has been a key to Norwegian’s growing popularity with travel agents.

He cited the Breakaway class of ship as “a demonstrable jump up, and creative on many fronts.” 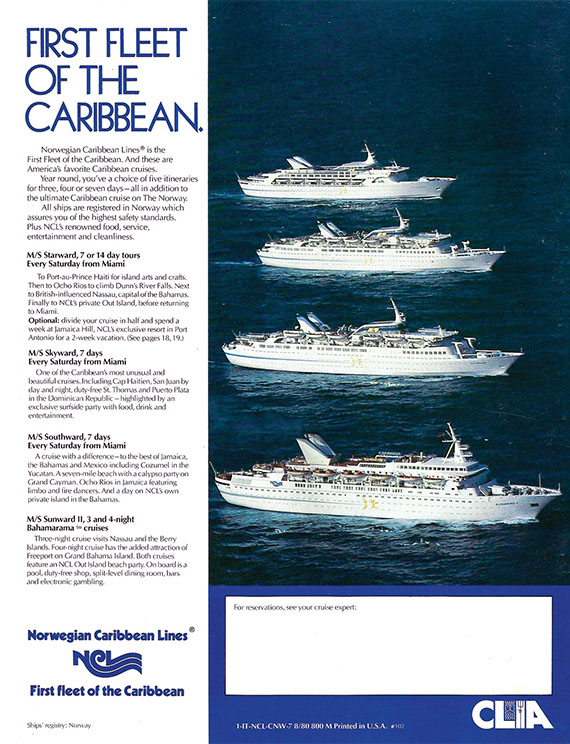 An ad from 1981 for Norwegian Caribbean Line’s four ships.

“Finally,” he said, “I think the appointment of Andy Stuart as president and now CEO was as applauded a move as any in the industry. A longtime veteran of [the company]gets his shot and has done a great job.”

Avoya’s Anderson said a largely forgotten milestone for Norwegian was its development of homeports outside of Miami, including Houston where it pioneered “Texaribbean” cruises in 1997, and Seattle, where it based a ship for Alaska cruises for the first time in 2000.

Anderson said his first personal memory of a Norwegian ship came touring the Skyward more than 30 years ago.

“I remember thinking, ‘This looks like a lot of fun, and I want to sell more of it,'” Anderson said. “The ship looked gorgeous. Today, obviously, she would look pretty tiny. But back then, 10,000 or 20,000 tons looked pretty big.”