The award-winning photography of Mark Edward Harris has appeared in Vanity Fair, Life and Conde Nast Traveler, among other national and international titles. His book “Faces of the Twentieth Century: Master Photographers and Their Work” was named Photography Book of the Year at the New York Book Show in the year it was published. Harris contributes to Travel Weekly frequently and, upon returning recently from North Korea, filed this exclusive report, in image and word.

This report is part of Travel Weekly’s Masters Series, which features new perspectives on travel by noted writers, photographers and artists.

It’s been more than 60 years since the signing of the armistice that brought a tenuous peace to the Korean Peninsula. The recent cyberattack on Sony Pictures and North Korea’s reaction to the knife attack on the U.S. ambassador to South Korea, combined with Foal Eagle, the annual South Korea/U.S. war games, have not brought the two countries any closer to a true or lasting peace.

The Joint Security Area at Panmunjeom, with North Korean soldiers in the foreground and South Korean troops in the background.

But there are those on both sides of the demilitarized zone (DMZ) who are trying to bring about a detente. Their weapon of choice is nonlethal: tourism.

At the end of October 2014, tour operators were notified that in response to the outbreak of Ebola in West Africa, all foreign nationals, both tourists and nontourists, were subject to a 21-day quarantine period upon entry to North Korea, officially known as the Democratic People’s Republic on Korea (DPRK).

The quarantine, effectively a travel ban, was lifted at the beginning of March, and tour operators were up and running just in time to bring clients in for the April 12 running of the Pyongyang Marathon. The only exceptions are people who reside or have recently visited Guinea, Sierra Leone, Liberia, Guinea-Bissau, Senegal, Mali or the Ivory Coast, who must still be quarantined.

Over the course of my 10 trips to North Korea, beginning in 2005, I have witnessed a sea change in the DPRK. Cars and taxis now traverse the once-barren streets. An Austrian coffee shop, an Italian pizza restaurant and microbreweries thrive in Pyongyang, and the state-of-the art Emperor Resort & Casino in Rason in the northeast corner of the country caters to the huge influx of Chinese tourists.

In 2014 the country announced that foreigners could now hold on to their cellphones (previously they were handed over at the airport for the duration of the trip) and rent local SIM cards for their phones upon arrival.

To better understand the current state of travel affairs north of the 38th Parallel, which divides North Korea and South Korea, I solicited the advice of Nick Bonner, co-founder and director of Beijing-based Koryo Tours, which brings the most Western tourists into the DPRK, and Andrea Lee, co-founder and CEO of Uri Tours, the leading U.S.-based tour operator and the exclusive sales and ticketing agent of Air Koryo for all of the Americas.

New Jersey-based Uri Tours (uri is Korean for “our”) began in 2003 as a Korean-American family business. Today it averages 1,000 visitors a year to the DPRK.

Lee recalled her first family trip to the DPRK in the 1990s:  “What we found were people not that much different from us or from our family in South Korea, with a unique culture and a distinct way of living.”

She and her family found themselves becoming accidental tour operators. 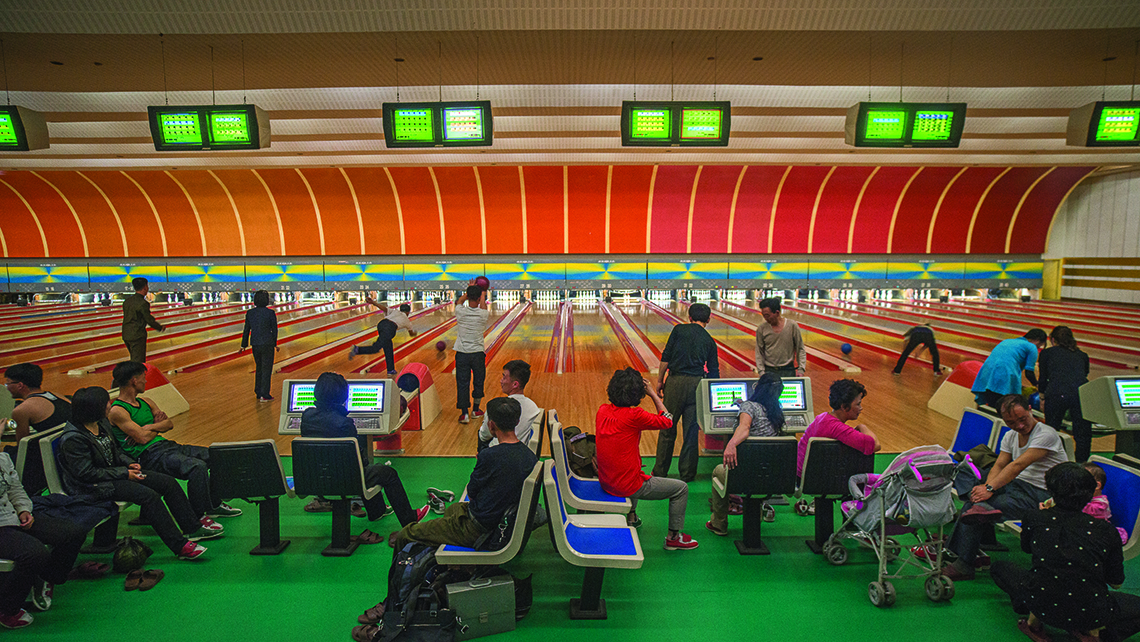 A bowling alley in Pyongyang.

“When we came back, a lot of people were very curious about our trip,” she recalled. “So we started bringing in people that we knew. Over time, it became a formal business focused on providing experiential tourism opportunities, activities that give the chance to interact with locals.”

As an example, she cited the Masikryong ski resort near Wonsan, which opened in 2014.

“We brought snowboarders into a country where traditional skiing is relatively new, so a lot of locals were learning how to ski rather than snowboard,” she recalled. “There were crowds of people around us asking our clients how they could do what [the clients] were doing with the snowboards. They were fascinated by it. A lot of times, language is a barrier to interaction. But when you’re doing activities that appeal to both foreigners and locals, the interaction is much greater.”

Lee and Bonner agreed that one of the biggest developments in tourism in recent years is the Pyongyang Marathon, with 2014 being the first year the DPRK allowed foreign amateur runners to participate in the race. The race, which is accredited by the International Association of Athletics Federations (IAAF), opened up in large part because of tour operators telling their North Korean partners that there was a demand for amateur runners to participate in marathons.

“For our part, we sent a number of articles and stats on how many people actually travel to different countries to run marathons,” Lee said. “Initially they were confused, because recreational running is not very popular in the DPRK. Of course, athletes train, but [North Koreans] were unfamiliar with the concept of the hobbyist.” 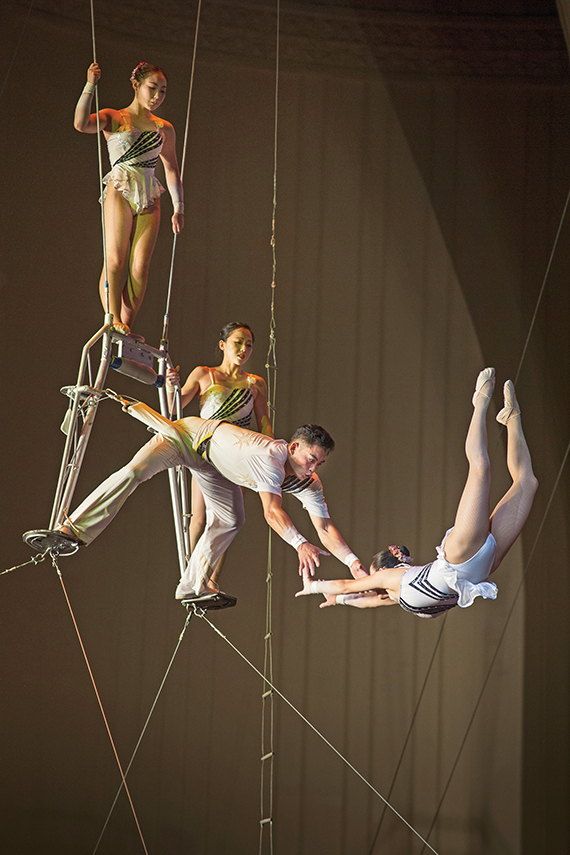 For those who want to explore more of the DPRK on the run, Bonner suggests participating in Koryo Tours’ half-marathon itinerary (with a 10K option) at Mount Paektu, Korea’s tallest and most sacred mountain.

Koryo, Uri and a number of other tour operators offer itineraries to explore Paektu without putting on running shoes. Hiking up to the rim to gaze down at Lake Cheonji (Heaven Lake), the deepest crater lake in the world, is arguably the most impressive nature opportunity on the Korean Peninsula.

Koryo Tours, which formed in 1993, today averages 2,500 Western tourists a year on their DPRK trips. It offers a number of specialized itineraries led by a Western guide who is an expert in subjects ranging from art, performance and architecture to hiking, running and camping.

In addition to their tourism activities, Koryo produces cultural-engagement projects and films, including the documentaries “The Game of Their Lives,” “A State of Mind,” “Crossing the Line” and most recently, the feature film “Comrade Kim Goes Flying,” a comedy about a North Korean coal miner pursuing her dream of becoming a trapeze artist.

Uri Tours’ two most popular trips are a three-night DPRK tour that departs on Saturdays and returns on Tuesdays, focusing on the two top highlights of the DPRK: the capital, Pyongyang, and the DMZ. Their five-day standard tour runs from a Friday to a Thursday and includes Pyongyang, Kaesong, Nampo and Myohyangsan.

“There are only a handful of direct tour operators to the DPRK,” Lee said in differentiating her company from most competitors. “Many of the sites you see online are resellers. All of our prices are in U.S. dollars, which is different from our overseas competitors. We accept all major credit cards, checks, wire transfers and PayPal.”

What’s more, she said that while the company does sell direct to consumers, it also offers “competitive packages for travel agents. In that sense we act as a [destination management company] and provide them support on the back end to brand these tours as their own.”

In fact, she said, the agent channel is essential to Uri’s business.

“We do rely on the network of travel agents to get these packages and the word out there that North Korea is a destination that people can visit,” Lee said. “Institutions such as the Pacific Council on International Policy come to us, as well, to do private-label tours. We also did a tour for the luxury residential cruise ship, the World. We did the orientation on the ship, then flew from China to Pyongyang.”

Lee said that while she hoped to bring in more of her fellow Korean-Americans, she also understood their hesitancy.

“For Korean-Americans, there’s still a stigma against traveling to the DPRK,” she said. “It is difficult for Korean-Americans to wrap around the idea in their minds that North Korea is a place you can go to and it’s not dangerous. One of the unique vantage points that we have is that we’re a Korean-American-owned American company, so we’re talking from firsthand experience.” 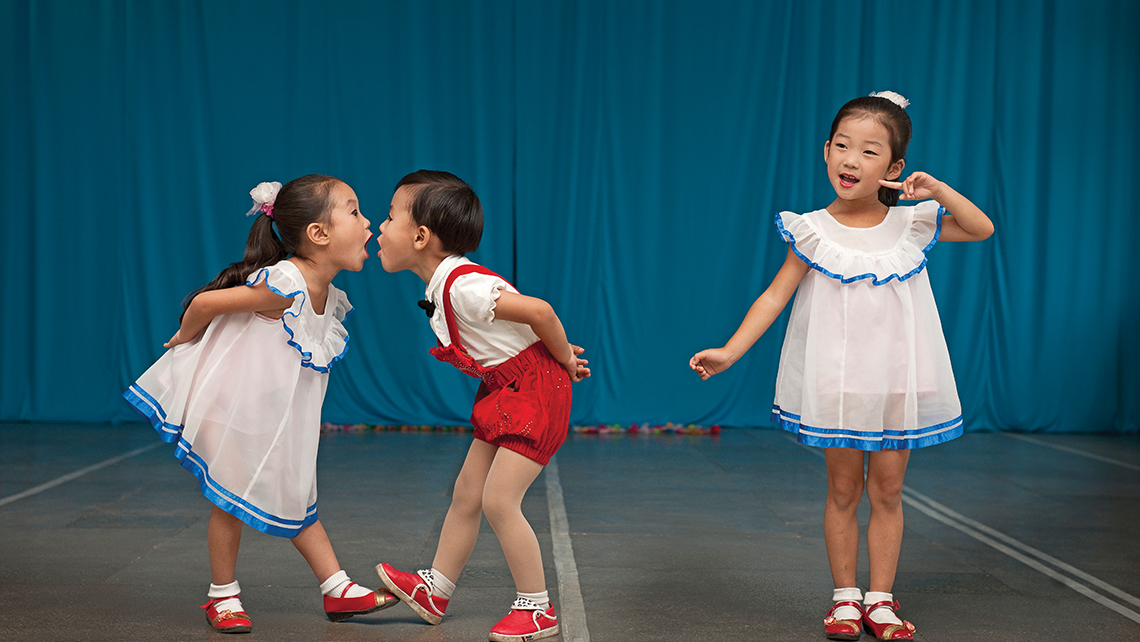 A performance at a kindergarten in Chongjin.

Lee said Uri is forced to address safety concerns, in light of the fact that three Americans were released last year after detentions of various lengths.

“For us as a tour operator, safety is the highest priority,” she said. “Safety is also a high priority for our North Korean tour partners. They are always making sure that the travelers are well taken care of, that they’re comfortable, that they’re safe, that they’re enjoying themselves.”

What’s more, she called the widespread perception that North Korean officials randomly arrest tourists as “baseless.” The recent detainments, she said, had been for very specific reasons and were very rare and extraordinary cases. 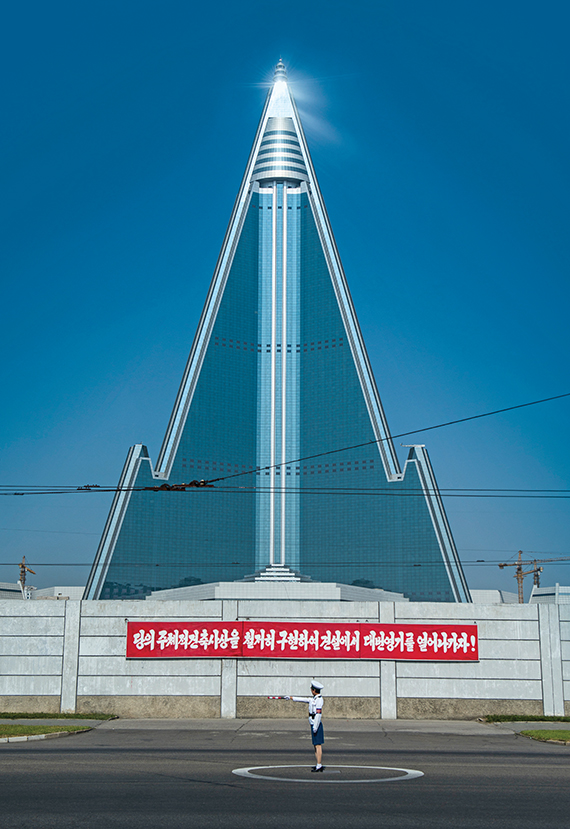 The 105-story Ryugyong Hotel in Pyongyang.

Since the U.S. does not have an embassy in the DPRK, it has an agreement with the Swedish embassy to provide basic consular protection services to U.S. citizens traveling in North Korea.

Both group and FIT tours usually begin in Beijing. A Chinese multi-entry visa is required for Americans. The exception is for those staying less than 24 hours, who can apply at the airport in Beijing for a transit visa.

U.S. dollars, euros and the Chinese yuan can be used in North Korea, though banks there refuse to take bills that are worn or torn. For those who do not have much money, whatever the denomination, China-based Young Pioneer Tours, started by a group of expats living in China, focuses on creating products that are as inexpensive as possible, opening up the DPRK to a larger market.

Lee and Bonner are not immune to critics who say their companies are supporting a despotic regime by bringing in tours. But both insist they are doing more good than harm.

“I think any interaction between the DPRK and the international community is good,” Lee said. “It’s good for the DPRK, and it’s good for the traveler. For most people, it’s a once-in-a-lifetime opportunity, and they get a lot out of it. Often, they return home realizing that the stereotypes that they had against the country were changed.”

What’s more, she said, visitors begin to appreciate the commonality of concerns that people face the world over.

“We understand that many tourists are concerned about the ethics of visiting North Korea,” he said. “Our view is that it is ethical to help open up a closed society, and we encourage people to visit and engage with those they meet while there. Visiting a country does not imply you agree with its government. Koryo Tours believes in the concept and benefits of engagement — as do the likes of the U.K. and Swedish governments, both of which have embassies in North Korea — and we push for positive engagement as a way to assist progressive change.” 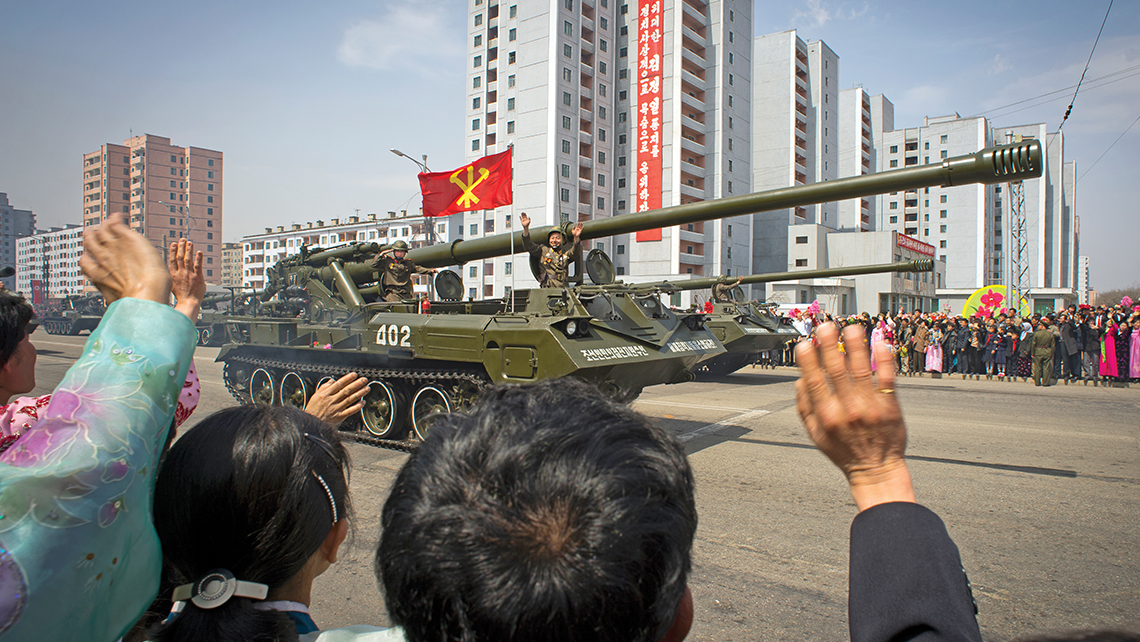 A military parade for Kim Il Sung’s birthday centennial in 2012.

The best way to deal with a society this closed, he said of North Korea, is to open some doors.

“The last thing people living in the world’s most isolated nation need is even more isolation,” Bonner said. “It’s a positive thing for Western travelers to see that North Koreans are not automatons or robots. Similarly, tourism helps North Koreans see that foreigners are not evil and against them.

“It’s about humanizing each other and engaging on a human level. Of course, tourism alone will not change things overnight, but it is all part of a wider movement toward positive change.”

Mark Edward Harris’ books on Korea include “North Korea,” named Book of the Year at the 2013 International Photography Awards, and “South Korea.” Visit his website, www.markedwardharris.com.