Carnival Corp. last week began to make good on its pledge to
remove six ships from its global fleet within 90 days, with Costa Cruises’
Costa Victoria being the first ship to leave one of its brands.

Carnival said in mid-June that it was accelerating plans
already in place to shed some of the 100-plus ships flagged within its nine
brands. The Covid-19 pandemic pushed up those plans, and Carnival said the
first six would be followed by more.

The company did not reveal any specifics, but there has been
plenty of industry speculation as to which ships are likely to go, and what
their fate will be. Most industry experts predict that they’re destined for a
scrapyard, which is where the Costa Victoria seems to be headed: Costa said its
ownership was transferred to a subsidiary of the San Giorgio del Porto
shipyard.

That fate will likely be shared not only by Carnival Corp.
vessels but by many of the older cruise ships still afloat, said Peter Shaerf,
managing director of AMA Capital Partners, an investment banking firm focused
on the maritime sector.

“The majority will get scrapped,” he said. “I think you’ll
see 30 ships scrapped over the next year, year and a half. And that won’t make
a dent. There are these old ships that, as business slowly comes back, are just
not going to be the vehicle of choice.”

Shaerf thinks it’s likely that Pullmantur’s ships will also
get scrapped, which has been rumored since the brand, half-owned by Royal
Caribbean Cruises Ltd. (RCCL), filed for insolvency last month. It’s an opinion
shared by UBS analyst Robin Farley, who said in a note to investors: “Pullmantur’s
three ships could be scrapped since they are all about 30 years old, and now
that there are younger ships available for sale, older ships are less likely to
find a buyer.”

Cruise ship historian Peter Knego in front of Cruise and Maritime Voyages’ Astoria, which was built in 1948 as an ocean liner. Photo Credit: Peter Greenberg

In years past, old cruise ships could often find buyers in
what was a strong secondhand ship market for cruise lines operating in parts of
Europe and Asia and expeditions.

Shaerf said that market is not currently viable because
there are few buyers, and even those who might be interested would have a hard
time getting financing.

“You’ve got to have some rationalization for capacity,” he
said. “And you certainly can’t get financing, or it’s very challenging to get
financing. No one is going to back a new operation at this stage. Buying the
ship is just part of the equation. You need working capital to run it, you
invariably need to refurbish it.”

Shaerf said that any cruise ships built in the 1980s and
early 1990s are “vulnerable.”

Peter Knego, a cruise ship historian, was surprised that a
ship like the Costa Victoria, which he said is in “beautiful shape” and only 23
years old, was being scrapped.

“Nobody would imagine that,” Knego said. “If there were a
viable secondary market, they would certainly sell that ship. But they realize
that there isn’t.”

Like Shaerf, Knego thinks most ships will be scrapped.  “It was already getting harder and harder to
place these older ships,” he said.

An example is the Chinese cruise market, where cruise lines
only a decade ago would put older tonnage.

Now China is getting some of the industry’s newest vessels:
Royal Caribbean International’s fifth Oasis-class ship, the Wonder of the Seas,
will sail from Shanghai when it debuts in 2021.

“Now the Chinese [cruisers] are very savvy, and they don’t
want a bunch of old ships; they want the very newest ones,” Knego said.

And the number of markets that can sustain smaller ships
with fewer passengers is “very limited,” he added. “The fuel bills for the
smaller ships are almost the same as those that carry twice as many people.”

None of this bodes well for other lines’ older ships. Knego
said other possible casualties include the Costa NeoRomantica (1993), Holland
America Line’s Maasdam (1993) and Veendam (1996), Princess Cruises’ Sea
Princess (1998) and any member of Carnival’s eight-ship Fantasy class, the
first of which, the Carnival Fantasy, launched in 1990 and the last, the
Carnival Paradise, in 1998.

“Some will survive because they are very popular in their
market,” Knego said of the Fantasy class. “They are old and tired, but they’re
great for the three- to four-day cruise market because of their density and
size. But if they want to shed tonnage and start vetting their fleet, those
would be the first ones to go.” 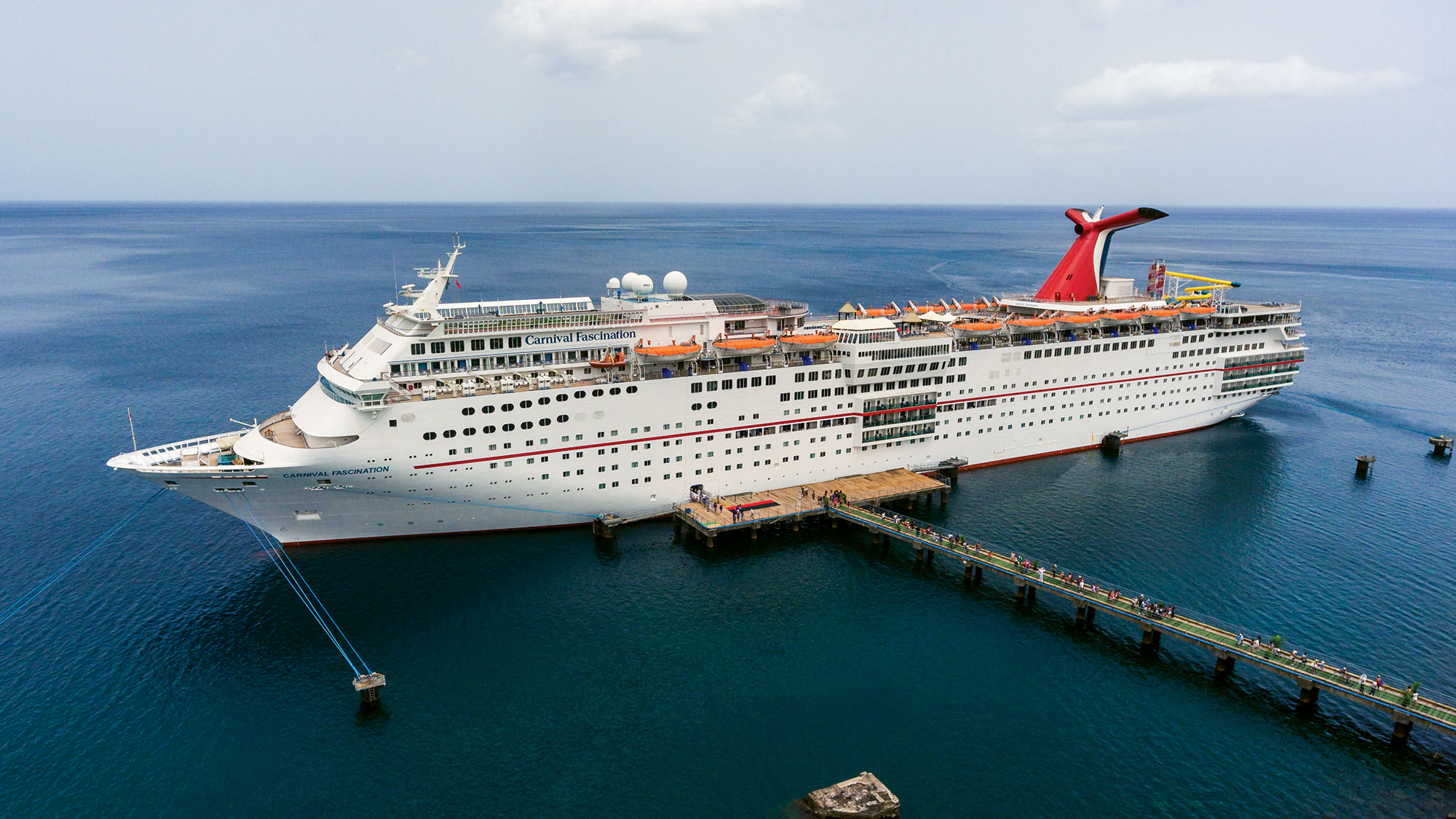 The Carnival Fascination, one of Carnival Cruise Line’s Fantasy class ships, the first of which debuted in 1990. Source: Discover Dominica Authority

Knego said some older ships around the industry are also
vulnerable, such as Cruise and Maritime Voyages’ Astoria, which originally
launched as a liner in 1948 and was completely rebuilt in 1994 and which Knego
called historically significant and very viable, “but too expensive to operate
for the capacity [550 passengers] that she carries. You pay the fuel bill on
the Astoria, and there go all the profits.”

Another reason cruise lines are likely to start shedding
tonnage is that with the industry shutdown continuing until at least Sept. 15
for most U.S. lines, it is getting more and more expensive to maintain a fleet
of dormant ships.

“Each week that goes by, they pay for crew and to maintain
the ships,” Knego said. “If you don’t maintain the plumbing systems, the HVAC
systems, clean the decks, paint the bulkheads, it doesn’t take long, especially
in salt water, for these ships to deteriorate and then become too expensive to
revive in six months to a year from now if things get better.”

When ships that move into what is called a “cold layup,”
where crew is reduced to a bare minimum, maintenance is significantly reduced,
and it can take anywhere from weeks to months to bring a ship back to service.
So while RCCL has not said it will scrap the Pullmantur ships, their move into
cold layup is one step in that direction, analysts say.

Aida Cruises to return to European waters in September