MSC Cruises said its new private island near Bimini will
open Nov. 9, and that arriving guests will find an authentic, natural
Bahamian island that has been groomed to provide a relaxing day at the beach.

What it won’t have, said MSC Cruises CEO Gianni Onorato, is
a manufactured, man-made amusement atmosphere.

“It’s not a theme park island,” Onorato said. “You
don’t find water slides. You don’t find ziplines. Nothing is artificial.
Everything has been done to transform this industrial site into natural beauty,
with a high level of attention to the environment. We have reshaped the island.
And we’re going to have an authentic Bahamian experience.”

Onorato said Ocean Cay is one of the building blocks of MSC’s
more permanent presence in the Caribbean. “For us, this is a little bit
more than to have a new ship, because it’s really something new for us,”
he said.

MSC decided to base its experience around the common
perception of what the Caribbean should be, Onorato said.

“In our imagination, the Caribbean is always viewed
with specific attributes, which are sunny weather, beautiful sandy beaches,
relaxation and fun. This is what Ocean Cay wants to offer,” he said.

Ocean Cay will also have nightlife, something private
Bahamian islands haven’t had much of to date. Because it is only 65 miles from
Miami, ships can depart as late as 1 a.m. and still arrive before dawn at in Miami.

To take advantage of that, original plans called for a
2,000-seat amphitheater with live music and entertainment. But Onorato said that
concept has been abandoned in favor of a “Movies Under the Stars”
evening.

Another attraction available to Ocean Cay visitors will be a
small out-island that will be available for daily rental for parties of up to
40 people. “They will be taken there by boat, they will have some services
there, and they will be the owner of an island for one day,” Onorato said.

“It’s another opportunity to have a different
experience, and I think travel agents especially will be very happy to offer
this to their groups,” Onorato added.

MSC has built a pier so ships will dock directly at Ocean
Cay. Onorato estimated that no place on the island is more than a 15-minute
walk to the pier.

In addition to food options on the ship, MSC will have a
central buffet near the family lagoon, as well as food carts with casual street
food distributed at the beaches during the day and near the marina at night.

There will be a Bahamian-themed bar in the marina, a “Hemingway-style
cocktail bar” at the lighthouse, and seven beach bars.

Food and drink on the island will come at an extra charge.
Beverage packages bought on the ship can be upgraded at a small cost, Onorato
said, and WiFi packages will also be extended for a supplement.

Retailers on Ocean Cay include the Bahamian Shop &
Market, which will host “authentic arts and crafts by local artisans and
Bahamian companies,” MSC said. It is the only place where payment will be
in cash rather than credit to a guest’s ship card. 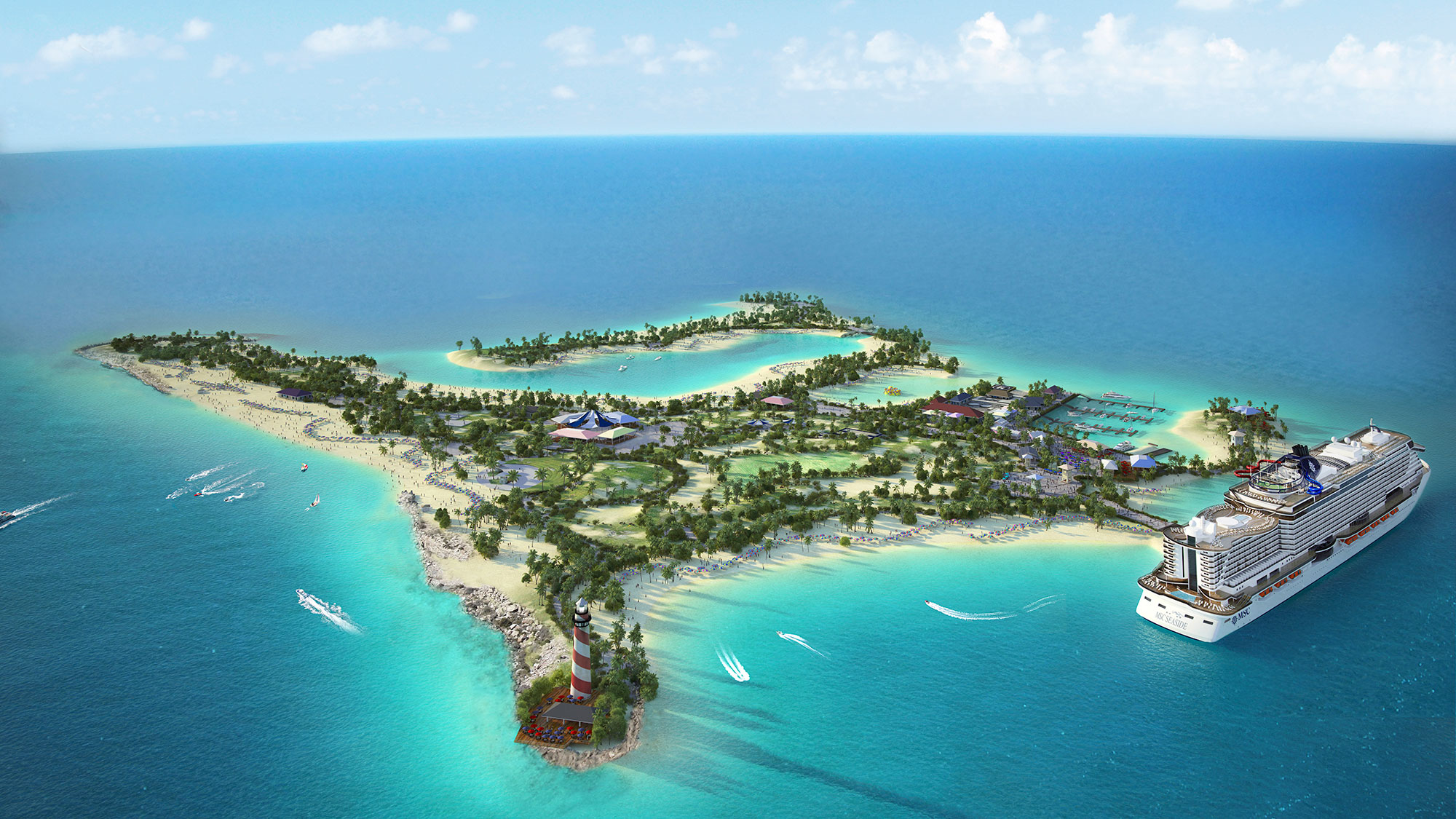 Ships will be able to dock at a pier on Ocean Cay.

Ocean Cay Trading Post offers a wide selection of Ocean Cay
souvenirs and gifts inspired by nature, while the MSC Shop will have MSC
branded items and essentials such as flip flops, sunscreen and lip balms.

Essentials can also be pre-ordered and collected at the
Welcome Center, MSC said.

To landscape the island and screen passengers from the sun,
MSC has planted over 2,300 trees on Ocean Cay. Onorato said that MSC will offer
a program geared toward young people about the importance of coral to the
environment and will be regenerating coral at Ocean Cay with the help of
outside experts and biologists.

A penis-shaped island discovered in the Pacific Ocean