Two of the most reliable formulas for food and beverage for vacationers are the Italian restaurant and the Irish pub. They’ve been done to death, but people never seem to tire of them.

So it’s notable that after the latest package of changes Princess Cruises installed on the Ruby Princess, the ship has neither.

In the spot on Deck 16 aft previously occupied by Sabatini’s on the Ruby Princess, passengers will now find Share, created for Princess by celebrity Australian chef Curtis Stone.

And while the ship never had an Irish pub, it now has a gastropub, Salty Dog, designed by chef Ernesto Uchimura to feature trendy versions of pub-style comfort food.

Share and Salty Dog are a big part of the refresh of the Ruby Princess, which arrived in 2008 and was the last in its class before Princess embarked on the larger Royal class ships it’s currently building.

The atrium of the Ruby Princess. Photo Credit: Tom Stieghorst

Together with a custom bed, a new game show and main theater entertainment and premium chocolate desserts created by Florida-based gourmet chocolate chef Norman Love, they are part of a $450 million “Come Back New Promise” that it’s bringing to its fleet over the next few years.

“Our promise is to provide guests with joyful, memorable moments, by partnering with people who are masters of their crafts,” Princess President Jan Swartz said.

No partner is getting more of a promotional boost than Stone, who has been a mentor on Food Network’s “All-Star Academy” and hosts the network’s “Beach Eats USA” show.

As the name of his restaurant suggests, the dishes Stone has created for Share are meant to be passed around and divided among tablemates.

Each diner can order one appetizer, one side, one main and a dessert. By this method, a table of four can practically taste the whole menu. The central idea is to share good times, food and conversation about the food, Stone said. 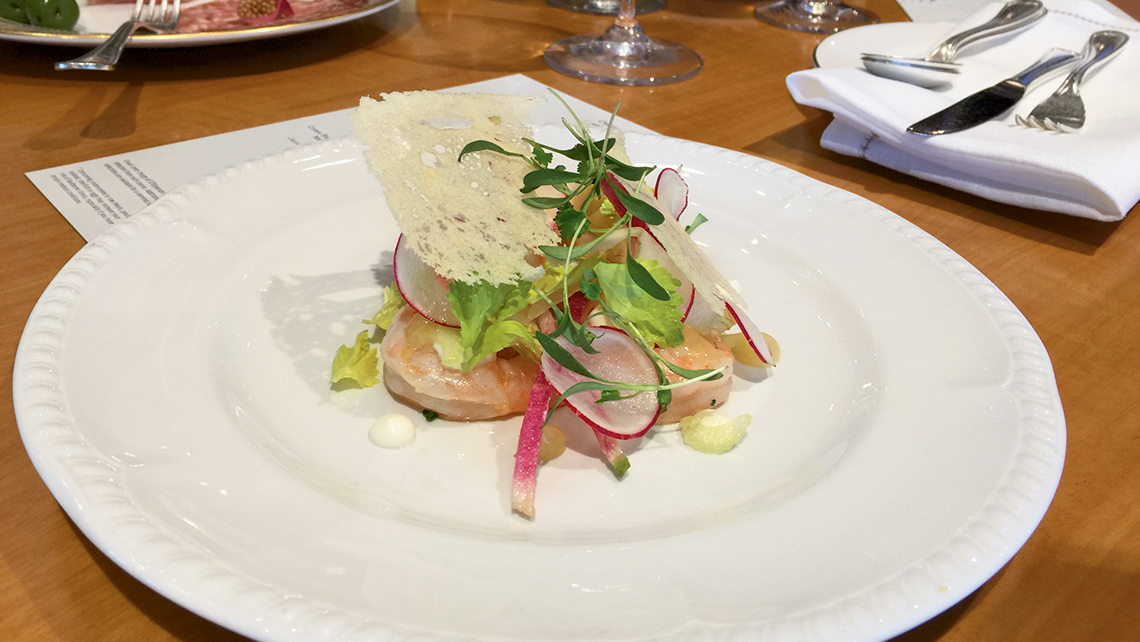 Appetizers include fresh tagliatelle pasta in a light Alaska king crab, chili and parsley sauce. There is a main course of roasted turbot with a gruyere cheese crumb topping and duxelles. Stone said he designed the dishes to be “warm and fuzzy” but at the same time to put diners “out of their comfort zone ever so slightly.”

At $39 per person, the upcharge for Share is a sizeable leap from the $25 cover charge at Sabatini’s. I thought the food was pretty good but wondered how many guests would pony up unless they had onboard credit funds to spend. The diners at Share the night I went were a lot younger than the demographic of the cruise as a whole.

At Salty Dog, patrons choose three items from the menu for $19, with an appetizer and dessert thrown in.

The Salty Dog doesn’t have its own space on the ship, but exists within the Deck 7 Wheelhouse Bar from 6 p.m. to 10 p.m. every night. I think that makes it a little hard to find. 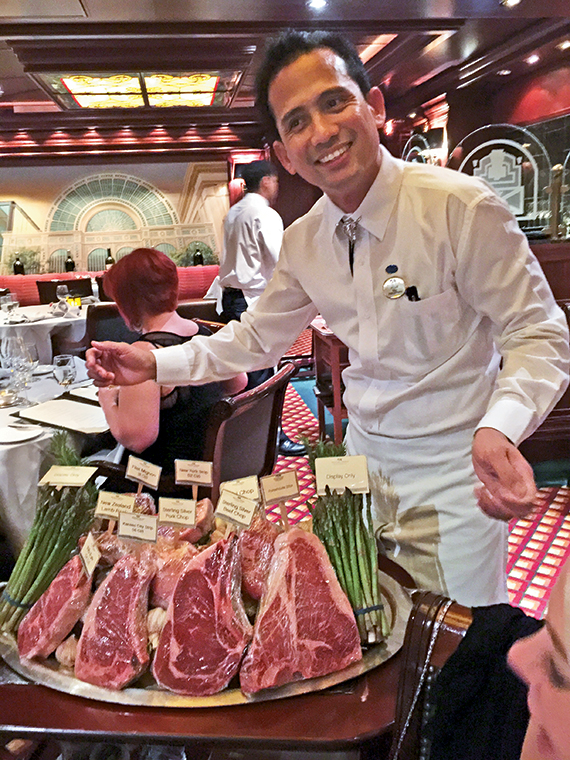 A waiter in the Crown Grill specialty restaurant displays steaks that can be ordered. Photo Credit: Tom Stieghorst

Hotel manager Guenther Kopf said it had about 50 reservations on the second night of our seven-night Mexican Riviera cruise.

(The Ruby Princess has another such restaurant, Crab Shack, which pops up in the Horizon Court buffet on select nights only, so you have to call the guest services number to see if it is open.)

I decided to try the Salty Dog with a few journalists from England, where pubs are indigenous. Their verdict: food, good; value, good; atmosphere; good. They felt the wait staff could have better explained some of the menu items.

More new deliciousness can be found in the International Cafe with the chocolates, tortes and parfaits Love added to it. They cost $2 each or three for $5 (best for sharing) and seemed hard to resist at those prices.

The refresher package for the Ruby Princess also includes new entertainment, such as a main stage production, “Magic to Do,” with music by Stephen Schwartz, composer of Broadway hits “Wicked,” “Godspell” and “Pippin.”

Princess has also brought a version of NBC’s singing competition “The Voice” to sea, with passengers serving as the contestants.

Princess prepares for its 50th anniversary in Alaska