Stroopwafels one day, steak frites the next: About midway through a recent media fam hosted by Eurail, I was pondering the novelty of having these foods practically back to back in the countries where they are said to have originated (the Netherlands and Belgium, respectively).

For me, it underscored the appeal of Eurail, which since 1959 has been helping Americans explore the Continent on their own terms, with one pass offering a streamlined approach to traveling via Europe’s myriad rail systems. In its 60th year, Eurail has upped its network to 31 countries while at the same time simplifying its product offering.

My group’s weeklong journey began in London, which was a fitting starting point since Great Britain was among the destinations added to the Eurail network this year (the other two were Lithuania and North Macedonia). After overnighting in London, we took a short walk from our hotel to St. Pancras station to board a rush-hour train to Amsterdam.

The boarding process at St. Pancras was similar to catching an international flight: Our bags were X-rayed, we walked through security scanners and our passports were checked.

Personnel also checked the travel diaries of our 10-day Global Passes, where we’d noted our intended destinations and the dates and times of the trains we were to catch. Then our passports were stamped — the last time they would be till our flights back home — and we took our seats in a first-class car for the five-hour ride to the Dutch capital.

A view of the Grund quarter along the Alzette River from Luxembourg City’s Old Quarters and Fortifications, a Unesco World Heritage Site. Photo Credit: TW photo by Eric Moya

From Netherlands to Luxembourg

We spent a couple of hours in Amsterdam, but the trip’s overall emphasis was on some of northwestern Europe’s less-visited cities, so that same afternoon we backtracked by about 40 minutes to Rotterdam for a look at that city’s past and present.

After visits to the Sonneveld House, built in 1933 in the Dutch Functionalist style, and the Chabot Museum, dedicated to the work of Dutch expressionist Henk Chabot (1894-1949) and his associates, we walked over to the Markthal, an indoor market that opened in 2014.

There I got my sugar fix at Goudstroop, the self-proclaimed “Home of the Original Stroopwafel.” With its warm, caramel filling sandwiched between crisp waffle cookies hot off the iron, the stroopwaffel was a satisfying midmorning treat and gave me a much-needed energy boost for the hours of city exploration ahead.

The next morning brought us to Antwerp, where we toured the city’s historical center. Afterward we had a few hours of free time. Several in my group offered high praise after their visit to Chocolate Nation, billed as “The Largest Belgian Chocolate Museum in the World.” I opted to spend my free time at the Red Star Line Museum, a fascinating look at the passenger line that brought millions from Europe to the New World (including Albert Einstein) over its six-decade history.

Dinner was at Mon, where the specialty is steaks from the Limousin cattle breed prepared in a charcoal oven. Mon capably satisfied my steak frites craving and served up a decadent apple tart, as well. 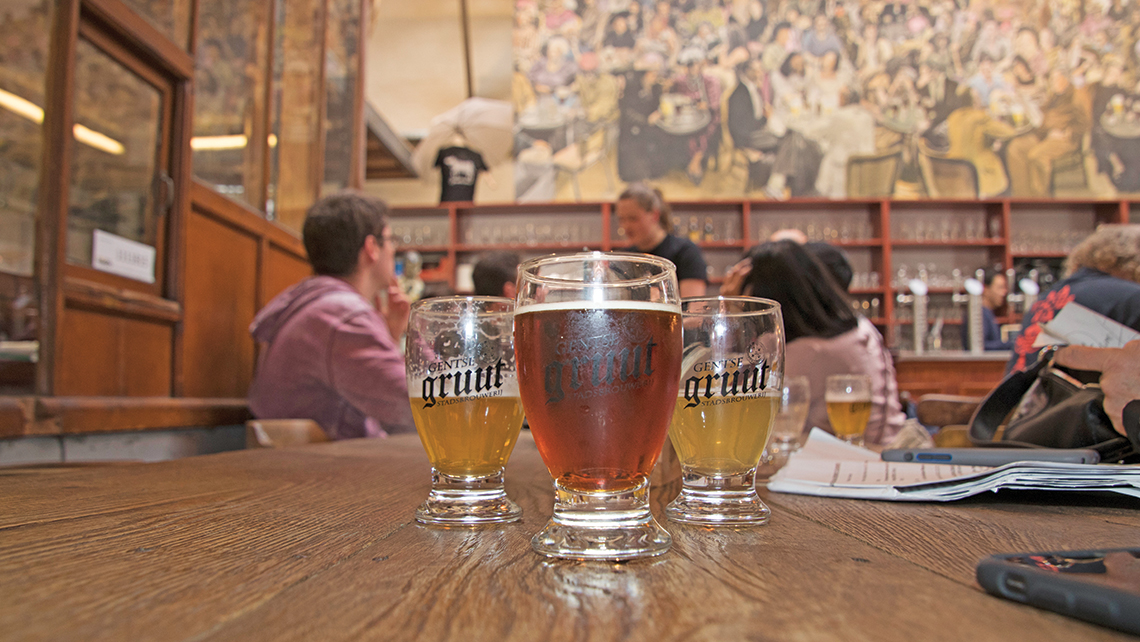 A sampling of beers at Ghent’s family-owned Gruut brewery, where the beer is brewed with a variety of herbs instead of with hops. Photo Credit: TW photo by Eric Moya

Our final Belgium stop was Ghent, where beer was the theme of the day. A stop at the Gruut brewery included a tour of the family-owned facility, which uses a variety of herbs in its beer instead of hops. The white and amber were my favorites in our four-beer sampler. Dinner at De Abt featured a set menu where every dish featured the Belgian beer Orval as an ingredient.

We capped our Eurail trip with a four-hour ride to Luxembourg, exploring the famously tiny nation’s center and Old City, a Unesco World Heritage Site. Even for a diminutive destination, a day tour wasn’t nearly enough time to explore. Luckily for visitors, with a Eurail pass they can experience over 40,000 destinations at their own pace, whether a multiweek smorgasbord or a whirlwind weekday sample.

This year, Eurail discontinued its Select Pass offering, which was valid for visits to two to four countries. Now travelers can choose either a One Country Pass, with validity ranging from three to six days, or a Global Pass, valid for up to three months.