Harvest Caye, Norwegian Cruise Line’s destination island in Belize,
is set to open on Nov. 17, with the first call being made by the Norwegian
Dawn.

The project has been at least three years in the making and
will be the most elaborate island destination Norwegian Cruise Line has
developed to date.

About seven acres have been groomed for guests who can
choose between a long white-sand beach, a water sports lagoon or a 300,000
gallon tropical pool to start their recreation ashore.

The venue serves as the first landside outpost of Norwegian’s
partnership with Jimmy Buffett’s Margaritaville franchise, with the debut a
Landshark Bar & Grill in Belize. (There are Margaritaville restaurants on
three Norwegian Cruise Line ships.)

The “Flighthouse” will serve as the anchor for a pair of ziplines and a freefall jump.

There is a shopping village with Belizean products, art,
food and drinks. Guests wanting to explore more of Belize can board two
275-person catamarans or 60-seat motorboats for the short ride to the mainland.

Towering above the action is the 130-foot tall “Flighthouse”
that serves as the anchor for a pair of ziplines and an apparatus that drops
guest from heights of 40, 60 or 100 feet before easing them gently to the sand
at the end of the drop.

Unlike some private cruise destinations, Harvest Caye has a
built-in dock so tenders aren’t needed. Guests walk through a ceremonial set of
gates with the Harvest Caye name displayed in a wrought-iron arch.

The island’s buildings are made of rustic stone trimmed with
mahogany and other native hardwoods. Landscaping includes 15,000 newly planted
mangroves.

Eleven air-conditioned beach villas are available for rent,
at $475 per villa. They accommodate six adults and feature a bathroom with a
shower, a deck and Bluetooth connections for concierge services and music.

Also, there are 15 pool cabanas for rent at $199 for the
day. The cabanas accommodate two adults. A beach clamshell with a pair of
loungers is priced at $29.

Norwegian will offer a variety of watersports and toys. Mini
speedboats are available for $69 for adults, $49 for children, and eco-friendly
electric boats rent for $40. Kayaks rent for $25 and stand-up paddleboards for
$20. The zipline attraction has packages starting at $59 for adults and $49 for
children. There is a river float feature for $79/$59. 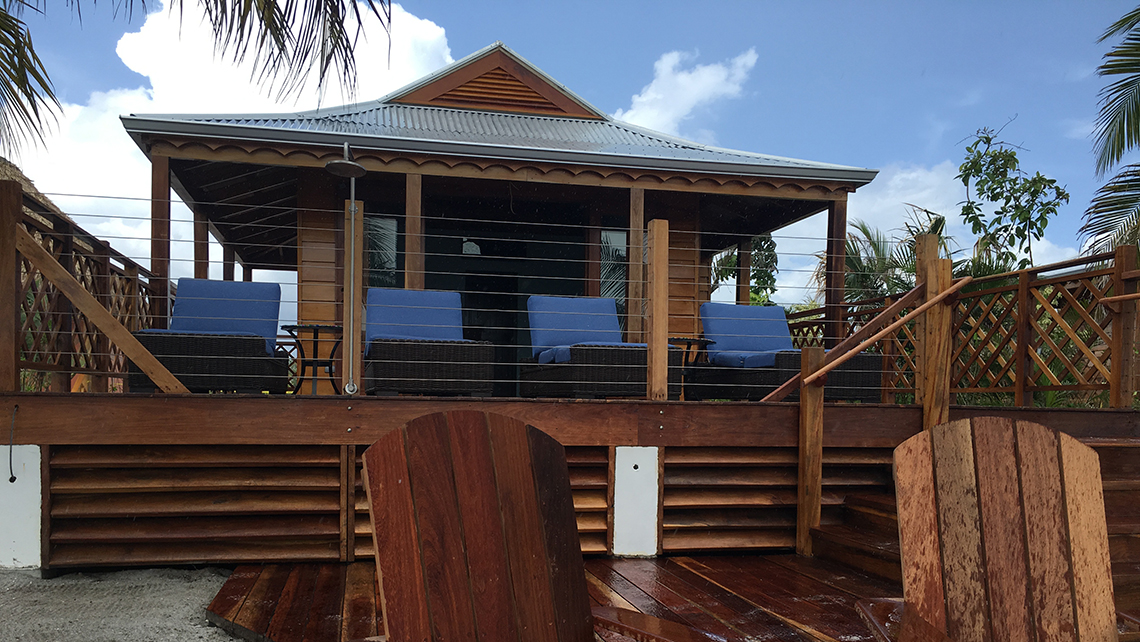 Air-conditioned beach villas will rent for $475 per day.

While the name Harvest Caye doesn’t sound particularly
indigenous, Norwegian said it was the name used by Belize for the island before
Norwegian arrived. “We choose not to change it,” a spokeswoman said.

After the initial call by the Norwegian Dawn sailing from
New Orleans, Harvest Caye is scheduled to host the Norwegian Jade on Nov. 18,
and then the Norwegian Getaway on Nov. 23.
A call by Regent Seven Seas Cruises, a cruise line owned by Norwegian
Cruise Line’s parent company, is slated for January.