HAVANA — Norwegian Cruise Line became the sixth U.S.-based
cruise line to sail to Cuba, bringing one of the largest ships ever to Havana,
its 2,004-passenger Norwegian Sky.

The Sky made an attractive sight as it glided into Havana
Harbor at sunrise, its flower-painted bow nosing into the berth provided for it
at the city’s single working cruise pier.

The Sky’s four-day itinerary included two full days docked
at the Sierra Maestra terminal in Old Havana, giving passengers ample time to
explore the city. Tours included the chance to see art, visit the legendary
Tropicana nightclub or motor through the streets of Havana in a classic
American car.

It is the 1950s vehicles that, at first sight, differentiate
Havana from every other destination in the world. It’s one thing to see a few
of them on display at a classic car show or museum and another to see scores of
them on the move through the streets of a sizable city, in their turquoise,
bright yellow and cherry-red finery.

A bartender makes mojitos at El Bodeguita del Medio, a bar that was once a favorite of Ernest Hemingway. Photo Credit: Tom Stieghorst

Cruise visitors step out from the confines of the terminal
building built in 1914 onto a busy street in front of the Plaza de San
Francisco de Asis, created in the 16th century when Spanish galleons were the
seafaring vessels of choice.

But the startling sight of a fleet of Skylarks and Impalas,
not to mention a few DeSotos and Studebakers, is an answer to the question of
why visit Cuba, or at least my first answer to any American tourist.

Fanning out through the narrow streets of Old Havana, there
were many intriguing sights to take in. For example, we hadn’t walked more than
a few blocks before seeing a butcher just inside an old doorway, carving away
at several sides of beef on a wooden table.

Walking was easy and, surprisingly, I had cellphone
connectivity so I was able to use the map function on my phone to navigate. We
made our way toward the Capitol building, modeled after the U.S. Capitol in
Washington. It had been recently cleaned and is being restored.

Havana is full of grand structures. Next door to the Capitol
is a Beaux Arts-style opera house, and there are plenty of other buildings to
admire, built between the 17th to 20th centuries.

But just as prominent are the many decaying and decrepit
buildings that haven’t had much if any maintenance since the Cuban revolution
in 1959. Depending on how you feel about ruins, this is either fascinating or
depressing.

We broke for lunch at a shaded set of tables up a dead-end
passage off Cathedral Square. I was ready to be unimpressed, but my grilled
shrimp at the Rincon de Pancho was decent if not terrific. Service was slow,
but the mojitos were strong, and the host could not have been more genial.

What made the stop memorable, however, were a couple of
musicians playing guitar and percussion instruments and harmonizing on songs
animated by the unmistakable rhythms of Cuba. It turns out just about every bar
and restaurant features a combo, and all three I heard were excellent.

Our second music stop was at El Bodeguita del Medio, a tiny
bar where Ernest Hemingway liked the mojitos. It doesn’t have space for all the
tourists who want to go there, so they spill out into the street. Hemingway’s
other drinking haunt, the El Floridita Bar some 10 blocks away, was also busy
but not jammed.

Norwegian’s overnight in Havana afforded us the chance for
two magical experiences. The first was to travel at dusk in a convoy of
1950s-era cars to the Plaza de la Revolucion, where Fidel Castro used to give
hourslong speeches during his presidency. A visit in the evening is cooler than
during the day, and a giant, steel outline of the face of revolutionary Che
Guevara on the side of one of the government buildings is softly backlit.

Our convoy next went to the Tropicana Cabaret, an outdoor, multilevel
theater where up to 900 guests can enjoy two hours of feathers, sequins, flashy
dancing and fine singing under an open sky. 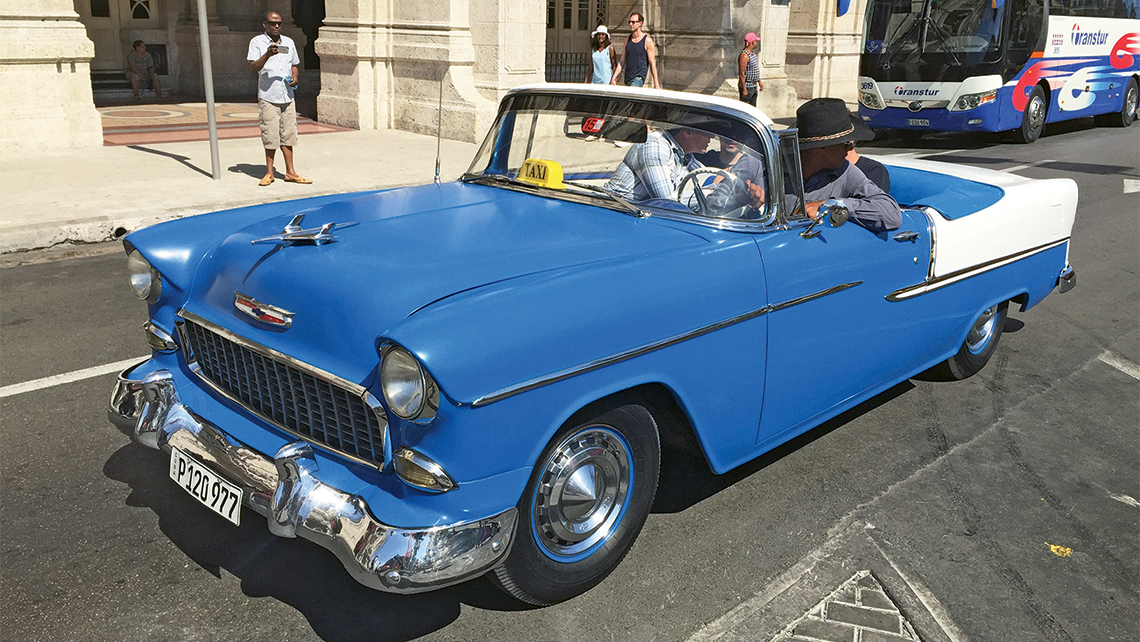 A vintage car is one of the sights that differentiate a trip to Havana. Photo Credit: Tom Stieghorst

The following day, we took a tour of the outstanding Fine
Arts museum in Havana and visited two grass-roots arts projects that were far
more interesting than I had expected. At one of them, Muraleando, community
activists in a blue-collar neighborhood took a giant, abandoned railroad water
tank that had been used as a dump for decades and cleaned it up to become an
arts center for children.

The restoration is financed by artists who sell their work
in the restored concrete tank and donate 50% of their earnings to the community
center.

Later that day as we sailed out the channel beneath the
cannons of El Morro, sunbathers and snorkelers waved goodbye.

I couldn’t help but hope that my first visit to Cuba would
not be my last. But I was certain that my Old Havana meanderings and the
people-to-people tours I took had given me a more nuanced view of life on this
island just 90 miles from our shores.