One of the dilemmas for Champagne makers is that their product is viewed as something perfect for a special occasion but not for everyday occasions.

That’s even more true for the finest brands, including Dom Perignon, the prestige cuvee of Moet & Chandon.

Many reserve it for celebrating a lifetime achievement, a milestone birthday or an important family gathering.

How does a Champagne maker entice the public to drink more of the bubbly as a daily pleasure?

Enter Oceania Cruises, which late in 2018 began promoting a tasting menu on its two biggest ships, the Riviera and Marina.

“People believe and think that Champagne’s only to toast and start a dinner or maybe at the end of the evening, to say Happy New Year, for example,” said Isabel Galvan, Oceania’s vice president of marketing.

Together, Oceania and Dom Perignon put together a six-course tasting menu that pairs gourmet foods with three vintage Champagnes. “This is a way for guests to experience Dom Perignon throughout a meal and really see how it pairs so nicely with different dishes,” Galvan said.

Three vintages of Dom Perignon, including one rose, are served in Oceania Cruises’ Champagne tasting dinners.

Of course, one reason Dom Perignon is reserved for special occasions is the price: more than $100 per bottle for even the least expensive vintages. The Dom Perignon tasting dinner on Oceania gives the curious a chance to try three vintages — a 2009, a 2006 and a 2004 rose — for $295 per person.

The tasting comes in an intimate and exclusive setting: the 24-seat La Reserve restaurant on each ship.

“It’s rare to be able to try so many different vintages at once,” said Franck Garanger, culinary director at Oceania, who helped conceive the pairing dinner with Marco Fadiga, executive chef of Moet & Chandon.

From the start, La Reserve was set up to accommodate a pairing dinner, Galvan said. This one begins with scallops served with roasted pineapple and a mole negro sauce, followed by Brittany blue lobster in yellow curry broth with coco foam.

Next comes an artisanal French cheese plate, served with a black currant-pepper paste and thyme flower.

While it may sound precious to some, Galvan said the experience is truly memorable. “The French cheeses, you can have it at home on your own, but to actually try them with the Dom Perignon, a 2004 rose vintage or the 2009 vintage, was such an experience.

“There were flavors that actually popped in my mouth that I couldn’t help but jump in my seat a little bit,” Galvan said.

The lemon caviar was another surprise and delight, Galvan said. “I think the menu has quite a few items that guests haven’t tried together, and then the Champagne just makes it all come alive.” 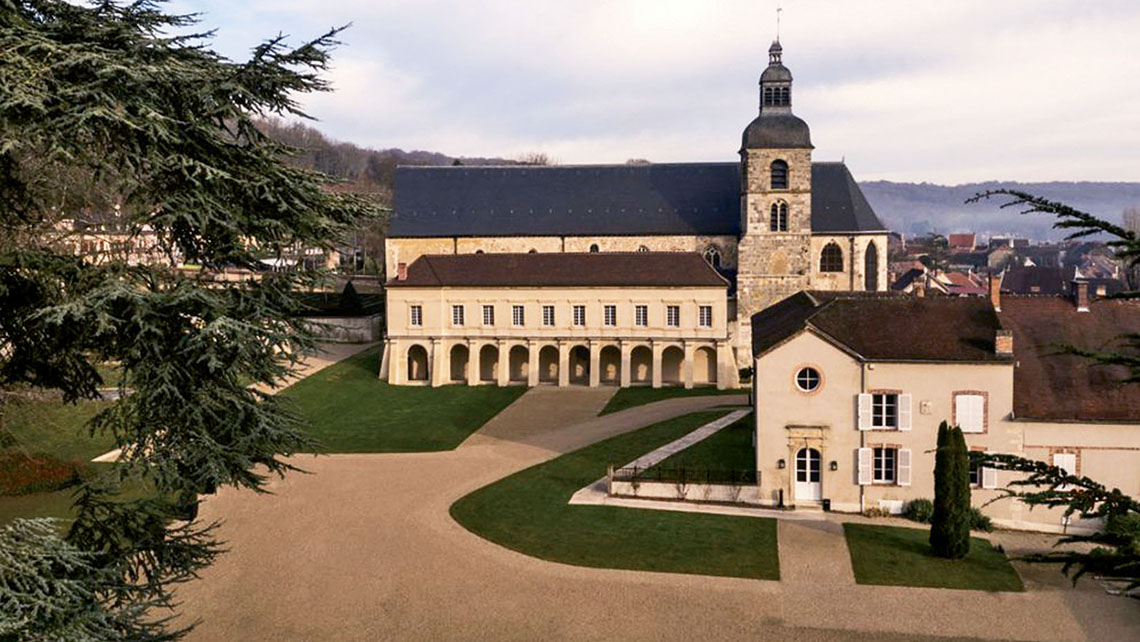 The Abbey of Hautvillers, where the monk Dom Perignon lived and worked.

A tasting menu on the lighter side

The other quality that Champagne lends to a tasting menu is lightness. Tasting menus that have been offered in the past at La Reserve have put some diners into a food coma. “So we wanted something that was more of a joy, more of a celebration, something that you come out of with a bounce in your step, and I think we hit that on the mark,” Galvan said.

Partnering with Dom Perignon, a name with links to the foundations of Champagne at the Abbey of Hautvillers, helps reinforce Oceania’s brand identification for fine culinary experiences.

“There is no one else doing this,” Galvan said. “To be able to try three different vintages of Dom Perignon with dishes created, prepared by Le Maison Dom Perignon and our executive chefs is really a one-of-a-kind experience.

“It’s something we take seriously every single cruise,” she said.

As one might expect, since making their debut on the Riviera in January, the dinners have been a talking point for guests, both for the opportunity and for whether they’re worth the steep price point.

“When guests experience it, they love to chat and mingle with each other,” Galvan said. More often than not, when the word spreads, it leads to new reservations. “I think it’s going to become quite viral and contagious onboard, to be honest,” Galvan said.