ABOARD THE CARIBBEAN PRINCESS — In “One Thousand and
One Nights,” Ali Baba hears the 40 thieves utter the magical phrase “open
sesame” to enter a cave in which they have hidden a treasure, but on this
ship, guests don’t even have to do that much to get their cabin doors to open.

Cabin doors sense a guest approaching if they’re wearing
their OceanMedallion. The lock turns green and allows access without any
further application of key, key card or other manipulation.

Just turn the handle and walk in.

It is the sort of moment that Princess Cruises hopes will
delight users of the OceanMedallion, a transmitter not much bigger than a
quarter that performs several functions on the ship.

Over 3,100 guests on a Caribbean Princess cruise this week
in the Eastern Caribbean have been given the medallions. Some of them are using
it actively. Others are not.

Almost all of them used it to board the ship, typically in
minutes.

After that, use depends on how committed a guest is to get
something out of the technology.

There are at least three things that most passengers are
using the OceanMedallion to do. The first is embarkation. The second is room
access. A third is transactions, such as buying a drink or an item from the
gift shop.

Those three things don’t require anything of the guest,
other than data and photo entry before boarding the cruise. The data can be
uploaded from home, or from the cruise terminal. But either way, it allows
passengers to show a passport and travel document to board, with the medallion
seamlessly taking care of all the other functions typically done at the
embarkation desk.

A passel of other functions is activated by OceanMedallion
in conjunction with the apps on a guest’s smartphone, starting with OceanReady, the preboarding app, and continuing with OceanNow, OceanCompass, OceanCasino, PlayOcean and OceanView.

Not every guest can be bothered with all that. I talked to
one Caribbean Princess passenger who said she didn’t want to have five new apps
taking up space on her phone.

For those who use the apps, there are additional but not
essential benefits that await.

OceanCompass is the wayfinding system that puts maps of the
ship on your cell. I used it to find a restroom, which saved a few minutes of
hunting time, and to locate the bar where our group was gathering to board a
tender.

PlayOcean is a games app, and if you or your children are
interested in e-games, it will be worth exploring. If not, probably not. We
played a group game on the Movies Under the Stars video screen on the ship,
which was fun but rather basic — more a demonstration of the capability of the
app than anything I would want to regularly do on a cruise.

OceanView is a compilation of videos from Saturday-morning TV
shows such as “Ocean Trek” in which Carnival Corp. brands have been
featured.

OceanCasino lets guests gamble from anywhere on the ship at
one of three gaming portals.

One of the most useful and fun functions is the delivery service
that comes with OceanNow. Sitting near Neptune’s Reef and Pool, I was able to
use the app to order a burger from the nearby Salty Dog Grill. The burger was
delivered to my table in 8 minutes.

However, I had wanted the gourmet Ernesto burger, which was
on the menu at Salty Dog but not one of the choices offered on the app. A
Princess executive explained that the Ernesto burger requires more prep time
than a regular burger, and thus was not included for the moment on the delivery
menu.

Some of the benefits of the medallion are not so obvious to
the guest but are tangible improvements to the cruise. In conducting the muster
drill before each cruise, the medallion allows for integration between the
muster stations and the bridge, improving tracking and shaving 15 to 20 minutes
from the length of the drill. 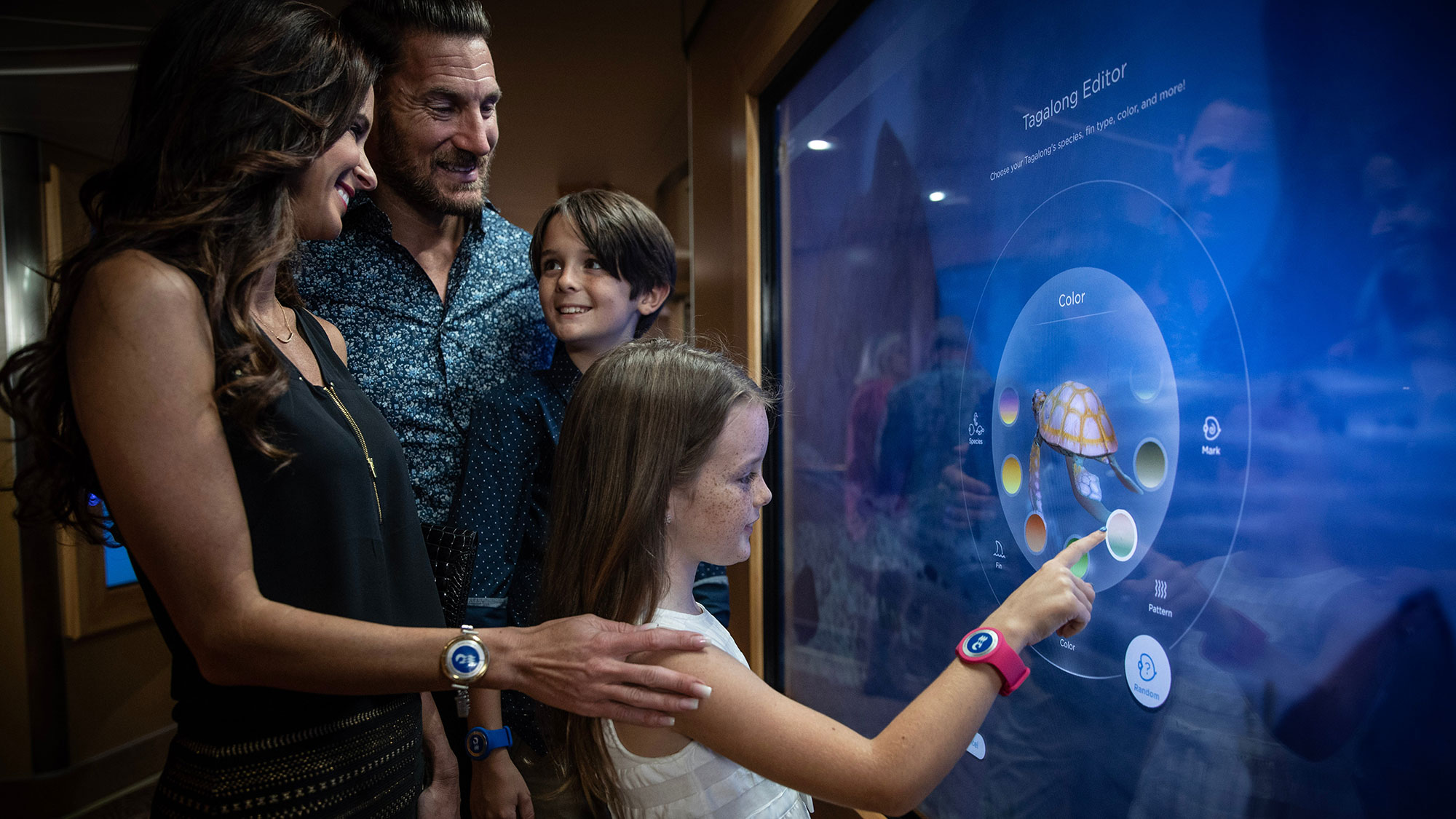 Guests are invited to create an animated personal avatar, called a tagalong.

Others are just frivolous fun. Each guest is invited to
create an animated personal avatar (called a tagalong) that is a turtle, seahorse or fish. The
tagalongs appear on various screens around the ship, and on a giant video above
the entrance to the cruise hall at Terminal 2 in Port Everglades.

The creatures don’t do much so far, except appear on screens
that a guest is near, but they’re fun animations that capture the attention of
kids under age 8 or so, and bring out the kid in anyone over age 8 who sees
them swimming about on the ship.