One of the joys of a Greece cruise — versus, say, a multicountry Mediterranean cruise — is the sheer number of islands you can visit in one week. That said, it can also be one of the frustrations, since by default, you won’t be able to stay long at each one.

Well, now you can. Enter Celestyal Cruises’ new weeklong Idyllic Aegean itinerary aboard the Celestyal Crystal that includes nearly two full days on each of Greece’s two most popular islands, Mykonos and Santorini.

The cruise departs from Athens’ port of Piraeus and, in addition to Mykonos and Santorini, includes calls at the Greek islands of Milos and Crete and in Kusadasi, Turkey.

At least, that’s the itinerary when the weather gods cooperate.

The Greek island of Syros, a port of call that can stand in for Milos should the Aegean prove uncooperative. Photo Credit: Felicity Long

During our cruise, strong currents prevented us from calling at Milos, rerouting us instead to the island of Syros — one of my favorite Greek islands, so no hardship there — where we spent the night, before heading to a full day in Santorini.

Frequent cruisers to the Aegean know that the sea can be temperamental, so changes are not uncommon, and the ease with which the cruise line offered new shore excursions and activities in Syros was seamless.

Because we didn’t depart Piraeus until early evening on embarkation day, we were able to spend the day touring Athens, climbing the Acropolis and enjoying the Acropolis Museum, which opened to much-deserved fanfare in 2009. We even made time for a zillion-course lunch at Xenios Zeus restaurant in Plaka, a favorite dining and shopping district in downtown Athens.

In Mykonos, we spent a morning of sightseeing through the archaeological ruins on Delos, an adjacent island known in mythology as the birthplace of Apollo and Artemis, followed by a private transfer to the beachside Kuzina restaurant, one of my favorite eateries on Mykonos. Here you can dine on upscale versions of traditional Greek fare, then lounge on the beach chaises on the sand or take a plunge for an after-lunch swim.

We also toured Mykonos town. Passengers could dine on the ship then return to shore for an evening out, thanks to hourly shuttle buses that made the roundtrip into the wee small hours. 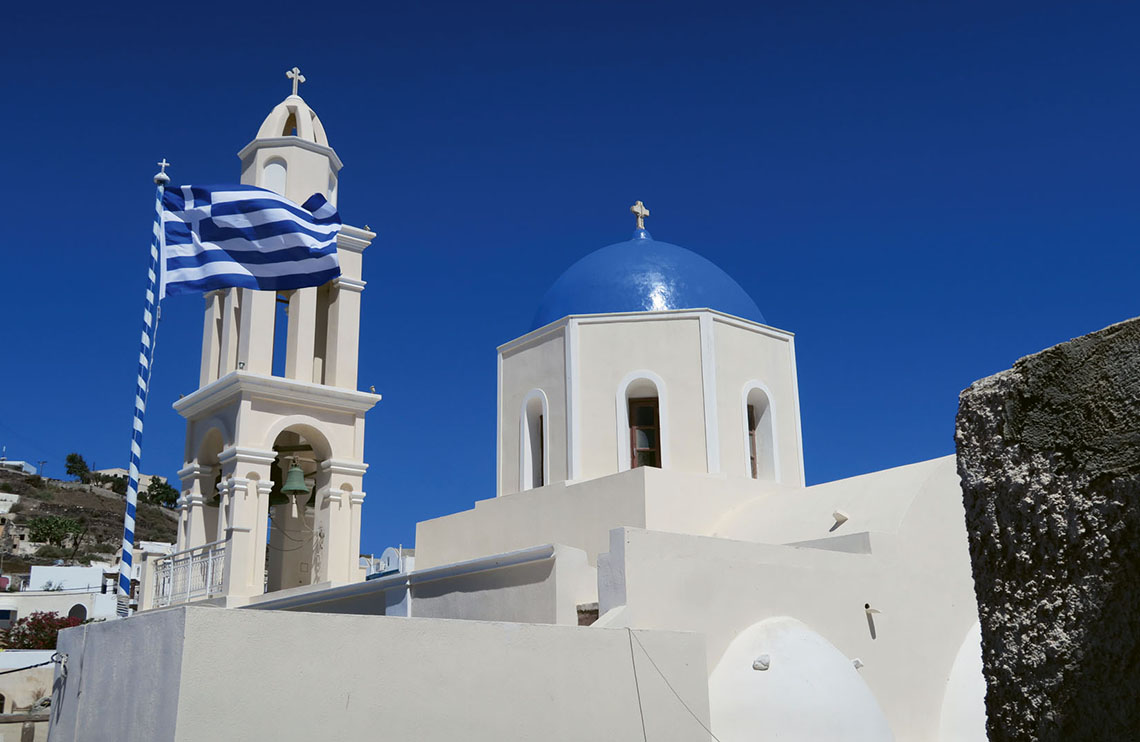 A church in Oia on Santorini, one of the Greek islands where the Celestyal Crystal visits on its Idyllic Aegean itinerary. Photo Credit: Felicity Long

The next day is when our itinerary went awry, so instead of sailing on to Milos, we spent most of the day at sea, enjoying spa treatments, relaxing by the pool and dining at the Leda buffet.

We arrived in early evening in Syros, just in time for a sunset tour of Ermoupolis, which is known for its Italian Renaissance vibe that distinguishes it from the other Greek islands.

We spent the next day on private excursions at Ono Concept beach club on Agathopes beach, followed by dinner at Allou Yialou, a fine dining seaside restaurant.

On Santorini, we visited the ancient village of Akrotiri, an amazingly well preserved settlement abandoned by its inhabitants before a volcanic eruption in the 17th century B.C.; lunched at the casual Kavourakia Restaurant in Agios Georgios; enjoyed wine tasting with a view at the Venetsanos Winery; wandered the stunning — and much touristed — town of Oia and found room for ice cream in Fira, from where we took the cable car back to the tender. 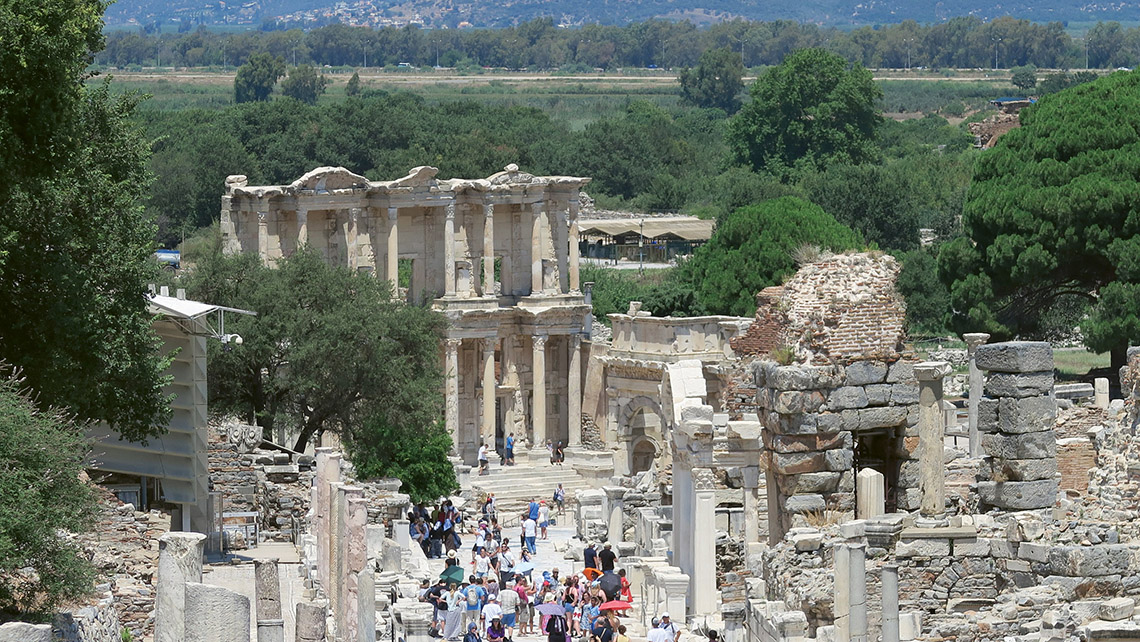 The ruins of ancient Ephesus are a major draw for cruise ships calling in Kusadasi, Turkey. Photo Credit: Felicity Long

In Heraklion, the capital of Crete, we visited the palace of Knossos, a Minoan ruin with beautiful frescos, which we got an even better look at in the city’s Archaeological Museum.

Our last day was spent in Turkey, and because Celestyal is one of the only mainstream cruise lines calling in Kusadasi in 2018, our visit to the vast and beautiful ruins at Ephesus was among the least crowded I’ve ever experienced. We followed the visit with an alfresco lunch at Gullu Konaklari, a boutique, hillside hotel in the Turkish village of Sirince.

Because our flights left late in the day, we also took in an excursion to the Temple of Poseidon at Cape Sounion, an undertouristed Parthenon look-alike southeast of Athens.

When dining onboard, we mostly ate at the Olympus restaurant, although buffets are also available at Leda and on select evenings poolside.

The Crystal accommodates 1,200 passengers, and children 3 months and older are welcome. 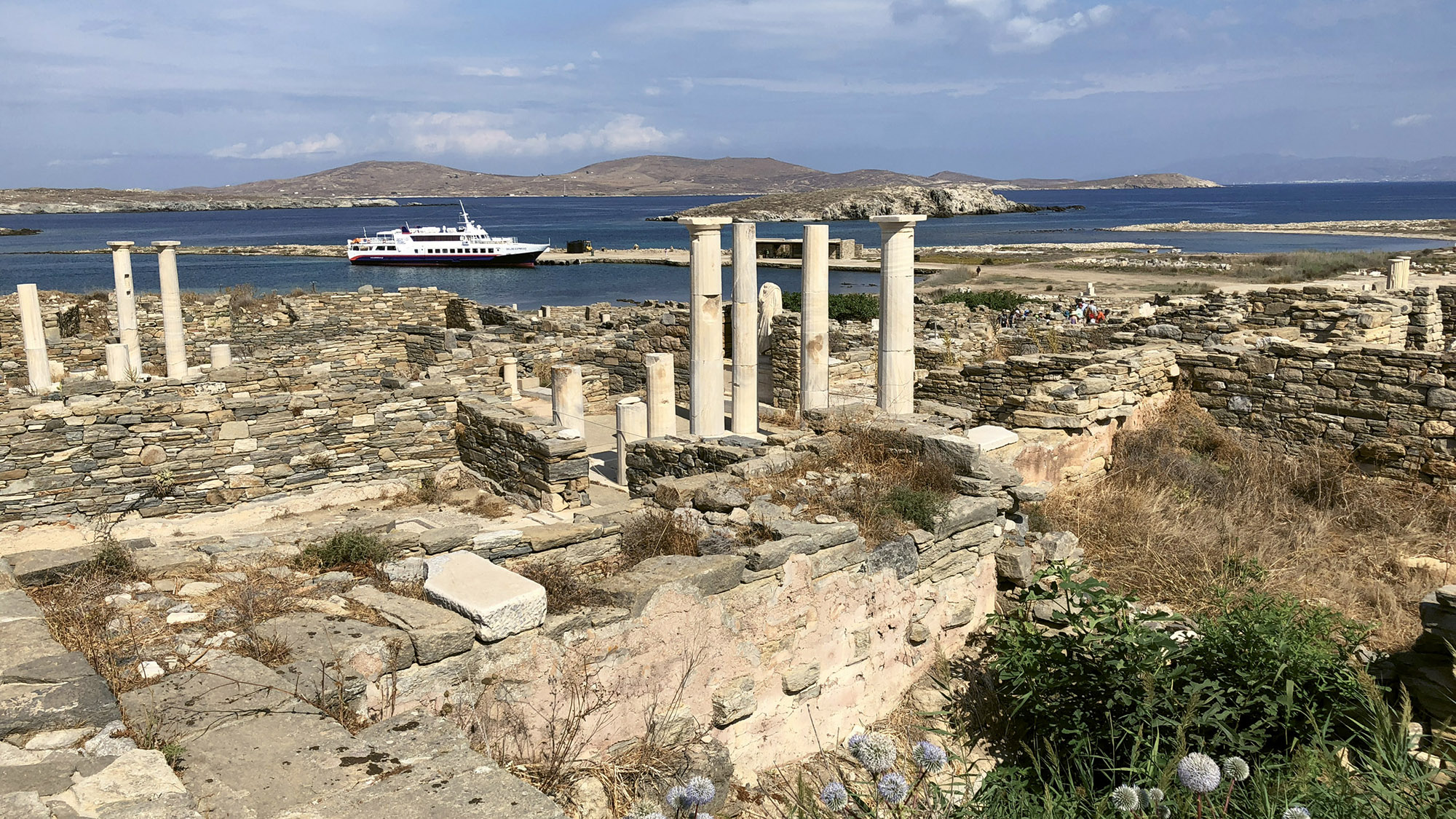 Is a Celestyal Cruises Greece and Turkey sailing onboard the Celestyal Crystal a good choice for families with children? As is often the case with family travel, the answer is “maybe.”

From Oct. 21 through Nov. 25, 2019, Celestyal Cruises will unveil the Eclectic itinerary, which will reintroduce the port of Istanbul to its cruise programs with weekly sailings. The itinerary will sail roundtrip from Piraeus, overnight in Istanbul and add two new destinations: Greece’s Volos, from which visitors can access Meteora’s hanging monasteries, and Turkey’s Canakkale, considered by archaeologists to be the gateway to ancient Troy.

The voyage also will include calls in Crete and Santorini and an overnight in Mykonos.

Finally, a new Three Continents itinerary, set to debut in 2019, will call in Alexandria and Port Said, Egypt; Ashdod, Israel; Limassol, Cyprus; Rhodes, Greece; and Kusadasi. The trip will begin and end in Piraeus.