The Norwegian Cruise Line voyage in Hawaii is certainly one of those cruises that’s bought for the itinerary, not the ship.

Since 2005, Norwegian has been the only operator of a big ship offering a seven-day, interisland cruise in Hawaii. It visits four islands in that span, and for virtually everyone the ship is an afterthought.

That said, the 13-year-old Pride of America has been well maintained and offers an attractive platform for seeing Hawaii.

The ship’s decor is an odd mix of early American and tropical Hawaiian. This stems from its construction history, probably one of the most unusual of any cruise ship currently in service.

The Pride of America was started in 1999 at Ingalls Shipbuilding in Pascagoula, Miss. Because it was intended to sail between U.S. ports without stopping at a foreign port, it had to be built in the U.S.

An image of the Great Seal of the United States adorns the floor of the guest services lobby on Norwegian’s Pride of America. Photo Credit: TW photo by Tom Stieghorst

A portion of the design reflects this made-in-America history. In the atrium, guests find an unusual obelisk meant to suggest the Washington Monument. The lobby floor features the Great Seal of the United States.

Above it sits a star-spangled, red, white and blue skylight, while behind the Guest Services counter runs a long mural of Washington featuring the U.S. Capitol. Pillars are fluted white columns with classical capitals.

It’s as if a small slice of colonial Williamsburg had been transported and installed in the middle of a cruise ship.

The original developer of the Pride of America went bankrupt after the 9/11 terror attacks. Norwegian bought the unfinished hull, had it towed to Germany to be lengthened and outfitted and sailed it back to operate as one of a trio of ships in Hawaii. But when supply proved too much for demand, Norwegian sent its NCL America division stablemates, the Pride of Hawaii and the Pride of Aloha, to the Caribbean under different names.

That left the Pride of America, with its red, white and blue hull, as the line’s only ship in Hawaii.

The Hawaiian side of the ship’s heritage is reflected in spaces such as Pink’s Champagne Bar, a deck above the Great Seal lobby. The bar pays homage to Honolulu’s Royal Hawaiian hotel, a Depression-era Spanish Revival-style hotel referred to as the Pink Palace for its uniform color scheme.

On the walls of Pink’s Champagne Bar are prints and posters of vintage Hawaiian hotels and other memorabilia, helping to set the mood for the voyage, which includes two overnight port stays.

A couple of other spaces stand out.

There is a very broad promenade deck that runs completely around the outside of Deck 6. The feeling is one of spaciousness and extravagance. It is a nice viewing platform, partly shaded by lifeboat tenders, and it also serves as a jogging track. In general, there is a lot of wide-open space on the top decks of the Pride of America, more than is offered in current designs.

Another area that is a bit of a throwback is the aft, where there is a large, shaded bar area, the Aloha Cafe, on Deck 11. This is a great gathering space for predinner drinks and was a fine spot for the sunset sail-out from Honolulu harbor.

A deck above is the small but cozy Oasis Pool, with a nice view aft, and overlooking it from Deck 13 is the Waikiki Bar. That’s about the only spot where smoking is allowed.

If you’re a gambler, the Pride of America might not be for you. There is no casino, in compliance with Hawaiian law prohibiting them. 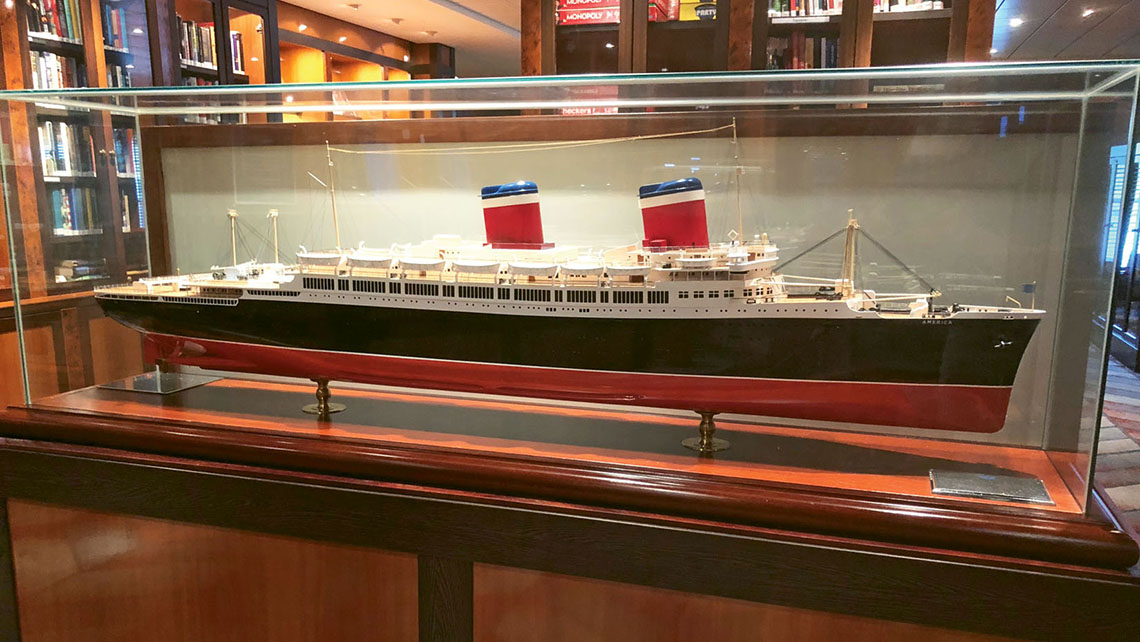 A scale model of the SS America is part of a memorabilia collection in the Pride of America’s Library. Photo Credit: TW photo by Tom Stieghorst

Another space worth pointing out is the large, wood-paneled library, which houses a collection of memorabilia, paintings and other items related to the old United States Lines ship the SS America.

The America was the smaller, older and less famous forerunner to the SS United States, the fastest transatlantic liner during the 1950s. The display includes a sizeable scale model of the SS America and an exploded diagram of its interior, revealing just how different the 1939-built steamship was from its counterparts of today.

The Pride of America wouldn’t be a Norwegian ship without a selection of alternative restaurants. Guest choices include Brazilian (Moderno Churrascaria), French (Jefferson’s Bistro), Japanese (Teppanyaki) and Italian (La Cucina).

I can recommend the fresh tropical fruit served on the ship — pineapple, guava and papaya. For Hawaiian specialties, go ashore but ask the very helpful and mostly American staff for recommendations. Our Hawaii-born chef at Teppanyaki had more suggestions than we could possibly try.

In lieu of inaugural cruises, Lindblad shows off new ship via video tour