The Port of Seattle used to take a back seat to Vancouver as a turnaround port for Alaska cruises, but no more.

With the 2017 upgrade of the downtown Bell Street Terminal at Pier 66, the continued use of the Smith Cove terminal and plans for a third terminal to be carved out of the cargo port on the south end of Elliott Bay, more and more cruisers will be visiting.

And for anyone planning a pre- or post-cruise stay in Seattle, the biggest problem is choosing from among the cornucopia of things to see and do.

You might as well start, as I did on a recent visit, with Pike Place Market, where fish get thrown, flowers get sold and plenty of fresh food, mostly local, is laid out in a market-style atmosphere.

The market is Seattle’s No. 1 tourist attraction, with an average of 13,000 visitors a day. One way to beat the crowd is to take a pre-opening tour with Savor Seattle Food Tours.

On my two-hour tour, we made seven stops at vendors who were either just opening for the day or opened early for us. Guide John Lefor pointed out that the market serves as a small-business incubator, and he enjoyed telling stories of how vendors succeeded with their chosen specialty.

Lefor seemed to know everyone at the market, and they greeted him warmly, giving us an inside view of the place. We went to a little-known garden, got tips on some of the best stalls to visit and ate everything from cheesy biscuits to smoked salmon.

Next, I spent some time along the waterfront, where I marveled at the change since my last visit in 2014. Because Seattle tore down the elevated freeway that divided the docks from the city, the area is now open and far more attractive.

Also new is the Seattle Wheel, a Ferris wheel that offers a nice view of the bay. Cruisers who will be leaving from the Smith Cove terminal can look down the waterfront and see their ships in the distance, with Norwegian Cruise Line ships at Pier 66 in the foreground.

The wheel is nice, but the recently opened Wings Over Washington next door should not be missed. It features a jaw-dropping, 20-minute simulated flight over a couple dozen land- and seascapes around the state. It costs $17, and I nearly plunked down a second $17 to do it twice.

One pier down from the wheel is the Seattle Aquarium, where I spent an hour or so in the company of sea otters, fur seals and other marine creatures found in Pacific Northwest waters.

For lunch, I visited the Crab Pot for a warm bowl of clam chowder. Plenty of diners had ordered the house specialty, a pot full of steamed clams, mussels, shrimp, corn on the cob and hot red potatoes in their jackets poured out on butcher paper over a big table. It is meant for two or more diners and starts at $25.95 per person. 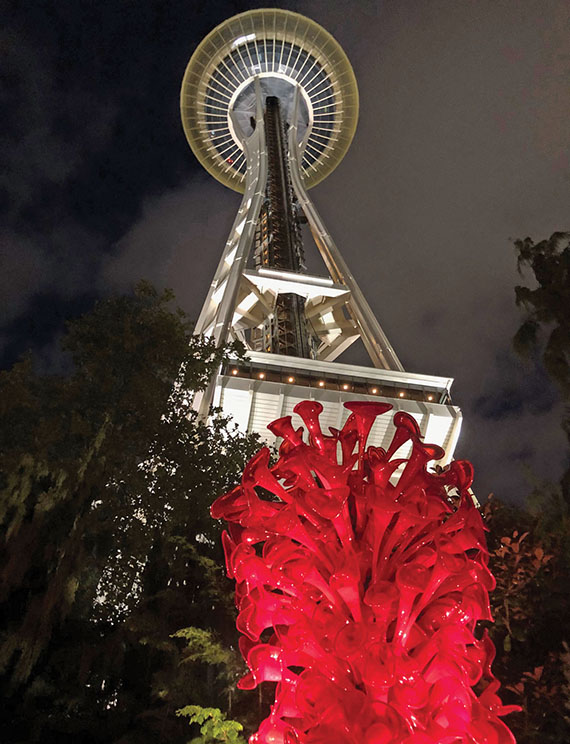 A nighttime view of the Space Needle, with a glass sculpture from the Chihuly Garden in the foreground. Photo Credit: TW photo by Tom Stieghorst

One of the unique dining experiences in Seattle used to be the revolving restaurant in the Space Needle, but the dining area was yanked in a recent renovation in favor of the Loupe, an observation deck with a revolving glass floor. It’s a great platform to see Seattle and a fun place to learn about the 1962 World’s Fair.

Visitors from downtown hotels were whisked to the fair on a Disney-style monorail that still operates, a fun, retro trip. The three-minute blast from the past is $5 roundtrip.

An ideal time to visit the Space Needle is at dusk, which also puts you in position to see the Chihuly Garden at night. I’ve seen Chihuly glasswork before, even in a garden setting, but this collection by Washington state native Dale Chihuly is truly stunning and one of the must-see attractions when visiting Seattle.

Another unique venue is the Center for Wooden Boats, which shows the craftsmanship involved in boat building. I happened to be in town when the center’s annual festival was on, so a mini-flotilla of wooden craft was on display.

The center at the foot of Lake Union is adjacent to Seattle’s Museum of History and Industry, another nice stop that is located in an old Navy armory. Exhibits run from the pioneer days through Seattle’s ascendency as a hub for tech giants such as Microsoft and Amazon. 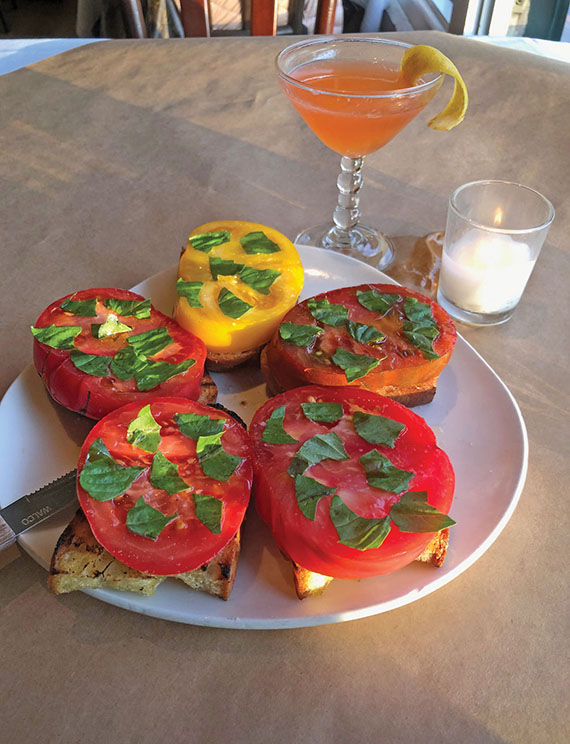 Lodging is plentiful in downtown Seattle, if expensive. The State Hotel, where I was hosted for two nights, is a 1904 medical building that has recently been converted to a 91-room, contemporary hotel.

The location is hard to beat for convenient access to Pike Place Market, the Bell Street terminal and the waterfront. Amenities include an excellent cocktail bar and open-kitchen restaurant off the lobby and a rooftop deck with a clear view of Elliott Bay.

The room interiors are a nice mix of quality materials and industrial-chic design. Prices in December are generally $144 a night, with a few dates higher.

Seattle is full of restaurants with good Pacific Northwest cuisine. A favorite of mine is the Pink Door, located in an alley with simply the pink door as an identifier. Diners step down into a multiroom dining area, one of which has views of the bay. Its heirloom tomato bruschetta is particularly delicious.

A vibrant mix of flavors, cultures in Durban