With a new ship coming next year, Carnival Cruise Line had its pick of more than a dozen U.S. cities for a homeport. But when it arrives in 2019, the Carnival Panorama will be headed for Long Beach, Calif.

The decision shines a spotlight on the port, which is the gateway for Carnival in the Los Angeles area. Other cruise lines sail from San Pedro about seven miles to the west.

Carnival’s operation is located in a geodesic dome that once housed Howard Hughes’ massive H-4 Hercules, or Spruce Goose. The cruise line has created elaborate theming for the cavernous interior of the dome, with a billboard representation of Thunder Mountain, dozens of freeze-dried trees and a scale model of the Spruce Goose.

But Carnival president Christine Duffy said there’s also more for passengers to do in Long Beach than in San Pedro.

“We believe Long Beach and the surrounding area have a lot to offer,” said Duffy, who expects Carnival to carry more than 600,000 passengers from the newly expanded Long Beach terminal this year.

Perhaps the premier tourist attraction in Long Beach, certainly for cruisers, started its life in Glasgow, Scotland, in 1936 and only arrived in California in 1967. That’s when the city purchased the Cunard Line ship Queen Mary and berthed it permanently as a floating hotel and events center.

A visit to the Queen Mary is not only a rewarding one for anyone with an interest in cruise history, it is an easy one for Carnival passengers. The ship is docked right next to Carnival’s waterfront terminal and provides a fascinating contrast to the contemporary Carnival ships docked nearby.

The Catalina Express underway with the Queen Mary and a Carnival Cruise Line ship in the background. Photo Credit: TW photo by Tom Stieghorst

One way to experience the ship is to stay onboard in the hotel. “We get a lot of people from Carnival who spend the night with us before their cruise, and then get up and go to their ship,” said Will Kayne, the Queen Mary’s acting captain and resident historian, who gave me a tour of the 1,019-foot-long vessel.

Upon arrival in Long Beach, the ship was modified for use as a hotel. The second- and third-class staterooms were dismantled, but the first-class staterooms and suites were converted into 355 guestrooms.

Hardly any two are alike and most are quirky. Although we couldn’t tour any staterooms because the ship was fully occupied, a colleague who has stayed in one told me the shower includes fixtures for both fresh and salt water.

One startling design contrast with modern day vessels is the amount of wood used in decoration. Kayne said that 56 types of wood were used on the Queen Mary, including six varieties that are now extinct.

The ship was built in the heyday of the art deco style, and its first-class public areas, such as the Observation Bar, are classics of the form.

Kayne said the ship is 80% to 100% booked on the weekends, especially during the summer. A recent room search turned up per person prices ranging from $139 to $169 a night on the weekends and $109 during the week.

The ship can also be seen on day tours that start at $27.95 per person. Dinners are served in the Sir Winston restaurant named for Winston Churchill, who sailed six times on the Queen Mary. The hotel recently acquired the sets from the “Darkest Hour” film about Churchill’s days as prime minister during World War II and has a museum installation onboard scheduled to run for the next several years. 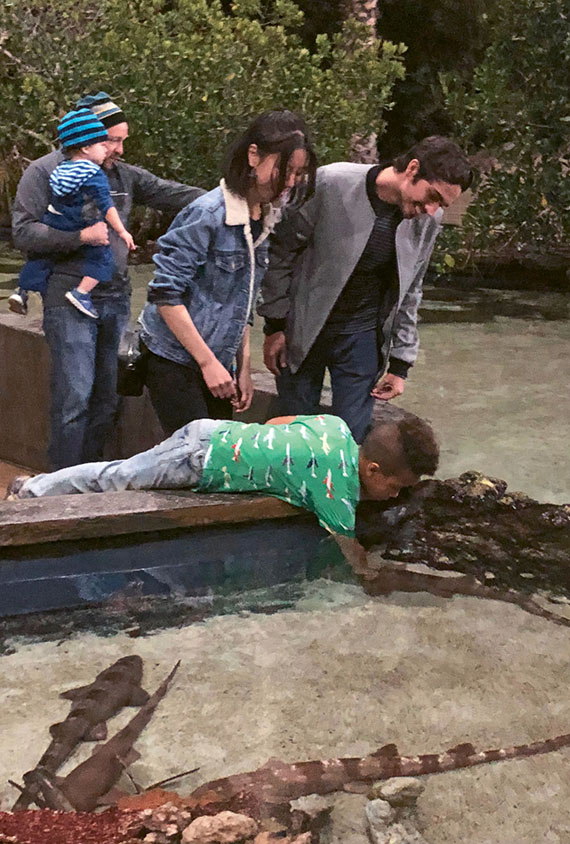 A child touches a shark in the Shark Lagoon at the Aquarium of the Pacific. Photo Credit: TW photo by Tom Stieghorst

Crossing the mouth of the Los Angeles River into downtown Long Beach brings you to the Aquarium of the Pacific, the largest aquarium in Southern California, with 50 exhibits and 11,000 animals.

I visited on a Friday night when, from 6 p.m. to 9 p.m., free admission is available to the aquarium’s 10,000-square-foot Shark Lagoon. Although there are a few 8-foot sharks and large rays in the main tank, the real action surrounds some touch ponds full of smaller epaulette and bamboo sharks. Kids leaned over, terrified yet compelled to touch the sharks as they patrolled the tank’s edges.

The aquarium occupies part of what was once the Pike, an oceanfront amusements area that included the Cyclone Racer, the largest seaside wooden roller coaster in the country; It was torn down in 1968. The area is now occupied, in addition to the aquarium, by a district of shops such as H&M, Nike and Restoration Hardware and a restaurant row called Shoreline Village.

All of these areas are connected by a water taxi/water bus system, but it only runs in the summer. 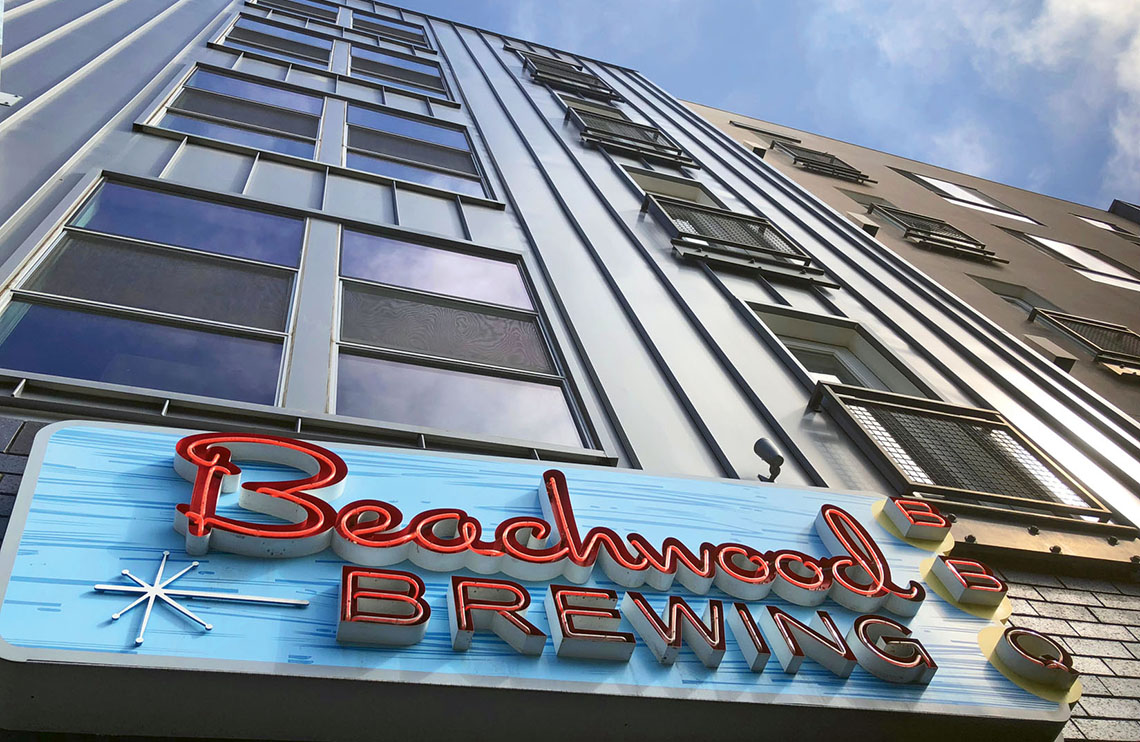 The Beachwood BBQ brewpub is one of the prime stops for beer lovers in Long Beach. Photo Credit: TW photo by Tom Stieghorst

Venture downtown for the city’s bustling bar scene. I dropped in on the Beachwood BBQ, named Best Large Brewpub at the World Beer Cup 2016. There were a dozen or more in-house choices plus a dozen guest taps from other breweries.

To test Beachwood’s competition, I hopped on one of the $7-an-hour Long Beach Bikeshare cycles docked nearby and rode four miles to the Belmont Brewing Co., an oceanfront brewpub at the foot of the Belmont pier jutting 1,620 feet out into San Pedro Bay.

My bike route took me on a wide concrete path along the beach that gave the city its name, and past the Long Beach Museum of Art, housed in a historical mansion. The beer at the end of the ride was good. At happy hour prices, I paid $11 for a brew and a quesadilla.

One other fun thing to do while in Long Beach is visit Catalina Island, either on a catamaran cruiser that docks on one side of the Queen Mary, or by helicopter, based on the other side. The hour-long ride on the Catalina Express is $73.50. A 15-minute helicopter ride is $270 roundtrip.

Private islands 2.0: More than a day at the beach