Cruise line executives have made no secret of the fact that their private destinations will figure heavily into the first itineraries they launch once they are able to resume service out of U.S. ports.

In fact, many have hinted that early sailings might consist only of stops at these destinations because the lines can control all health and safety protocols, know who is there and can prevent passengers from mingling with locals during port calls.

What follows is a list of most cruise line private destinations reachable from North American homeports, and what makes each one special.

Great Stirrup Cay has over 1,500 feet of
beachfront, 50 cabana and villa options, shore excursions that include a
3,000-foot-long zipline and 11 food and beverage options in what
Norwegian calls a “natural tropical setting.”

Guests must tender to the island.

• Standout feature:
Silver Cove, an exclusive resort-style area with its own lagoon and
private beach, debuted in December. Guests who rent one of 38 beachfront
villas have use of the Mandara Spa, Moet Bar and Silver Cove Restaurant
and Bar.

The studios and one- and two-bedroom villas
have daybeds, club chairs, outdoor patios and lounge seating. The family
suite has a private dining area and a master bedroom with a spa tub and
shower.

Disney character interactions are a key part of the Castaway Cay experience.

As one would expect, Disney Cruise Line’s private island, Castaway Cay, offers Disney character greetings and activities, such as a Lilo and Stitch dance party. Snorkelers will even encounter Disney characters underwater in the lagoon.

The island has separate kids areas based on age group, such as the Teen Hideout, and plenty of water play zones. Activities include various watersports and Sports Beach, which has volleyball and tetherball courts, and a 5K running trail.

• Standout feature: Adults wanting some alone time can drop off their kids with Disney counselors at Scuttle’s Cove, an on-island kids club, and head to the Serenity Bay adults-only cove with open-air massage cabanas and the Castaway Air Bar. 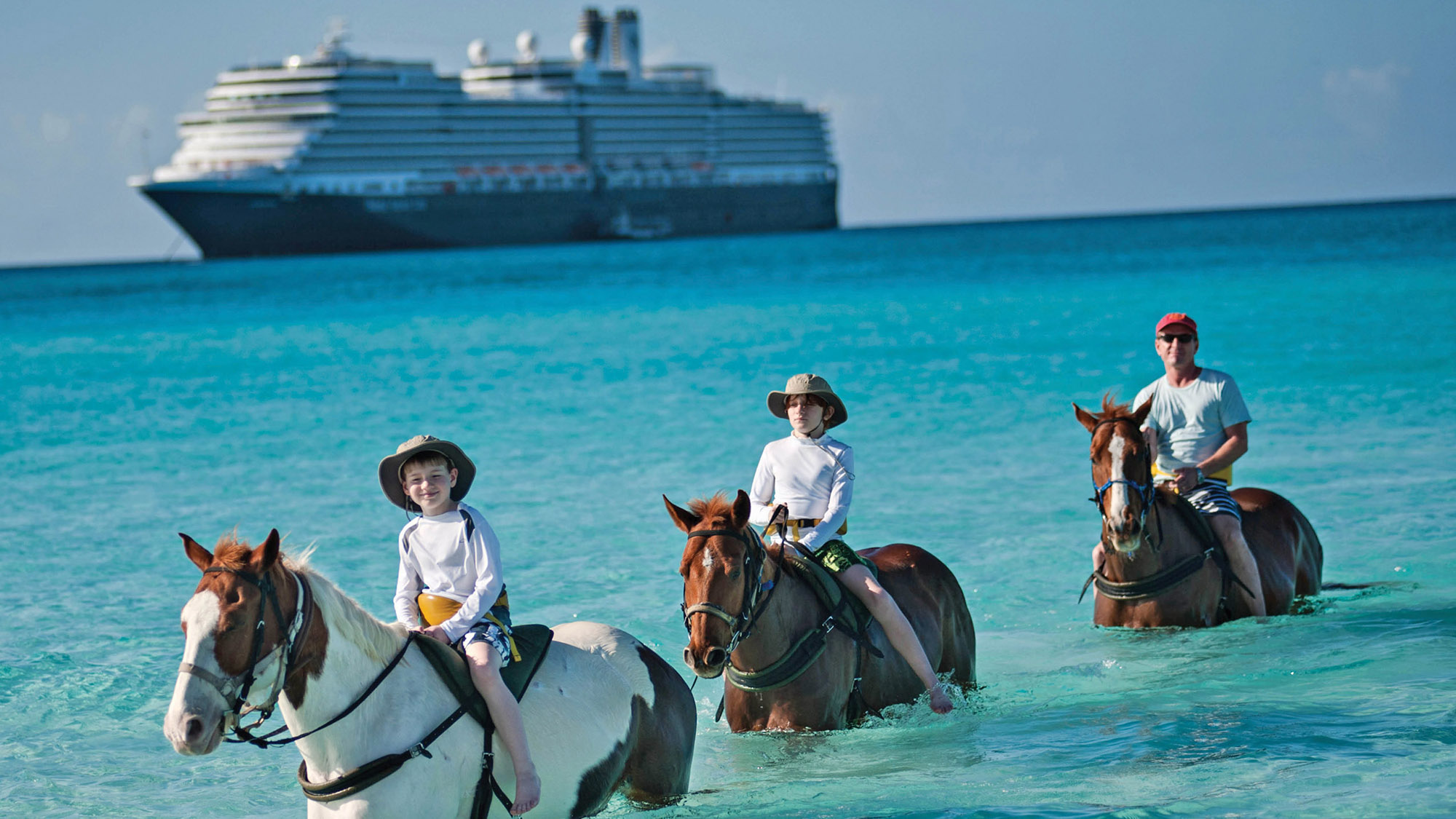 Horseback riding at Half Moon Cay, Holland America Line’s island in the Bahamas.

Holland America Line’s island in the Bahamas, Half Moon Cay, is also used by Holland America’s sister brands in the Carnival Corp. family.

Much of the 2,400-acre island remains a migratory bird reserve. Half Moon Cay aims to offer “a quintessential Caribbean island experience” in a natural setting. It offers a mile-long, crescent-shaped, white-sand beach (which gives the island its name); two-story colorful Beach Villas with second-floor hot tubs; and dining options that include the Lobster Shack. In 2018, Holland America renovated its Half Moon Lagoon waterpark. Passengers can hike along acres of trails through the island’s untouched natural flora and fauna.

Guests must tender to the island. 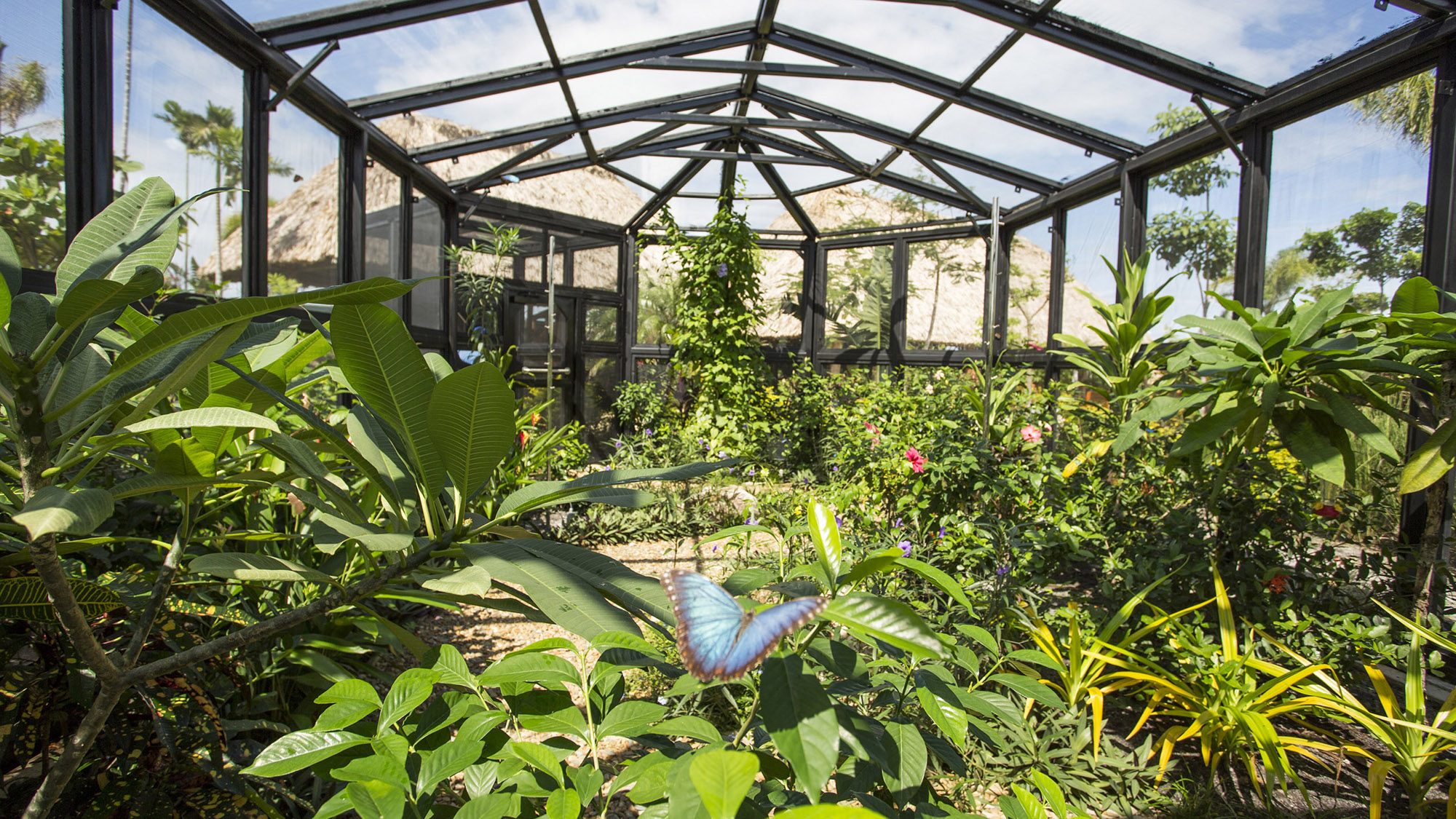 The only private cruise destination in Belize, Norwegian incorporated local design such as mahogany-trimmed villas available for rent along a 7-acre beach. The island also has a 15,000-square-foot pool, 3,000 feet of zipline and a ropes course. The tropically themed, two-story LandShark Bar & Grill was designed by Jimmy Buffett’s Margaritaville Holdings.

Harvest Caye is a 15-minute boat ride from mainland Belize, where available tours include the Mayan archaeological ruins, a tropical spice farm, a savannah ecotour by boat and a rainforest river tubing and rafting excursion. 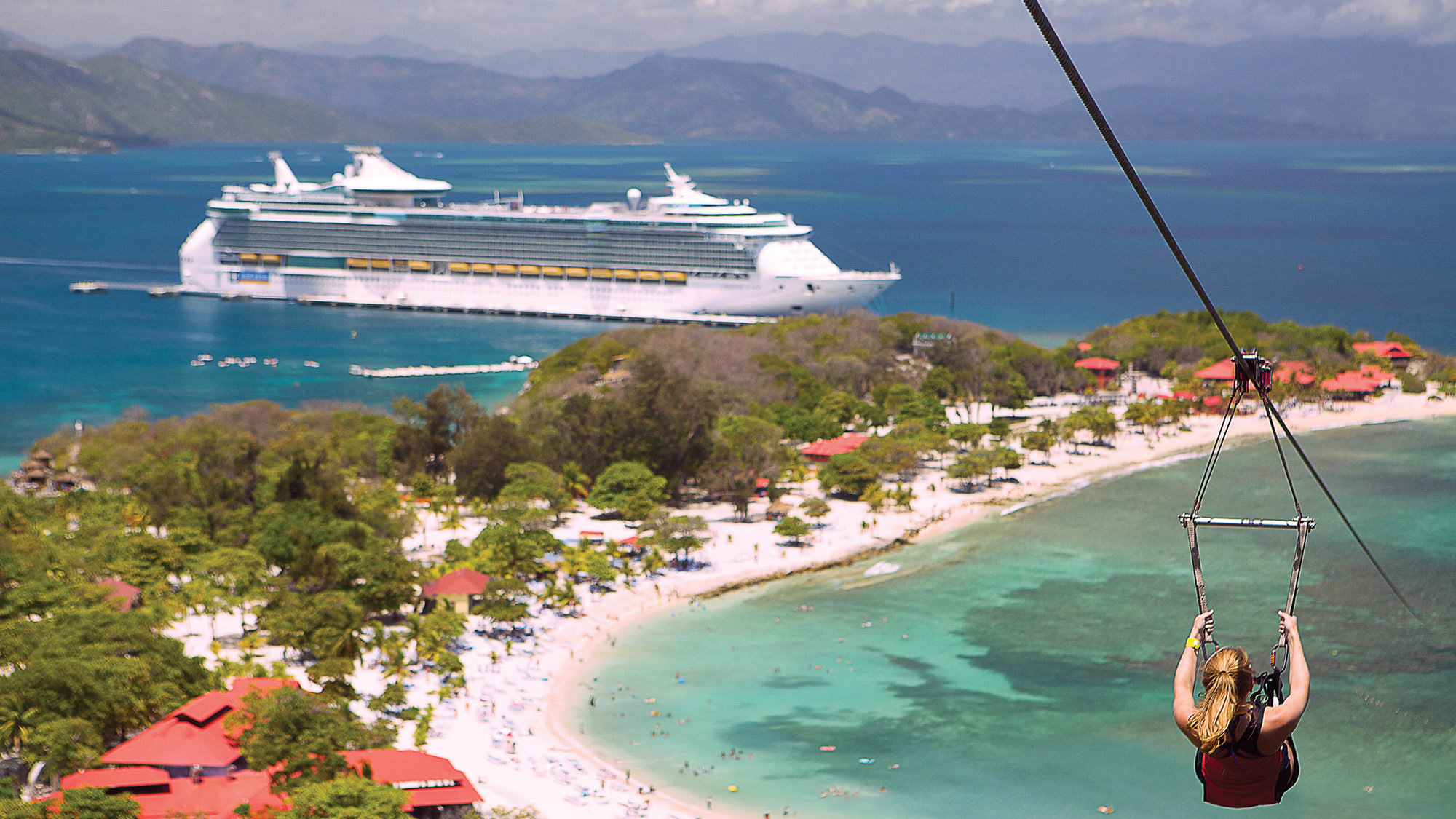 Divided into five “neighborhoods,” Labadee has a zipline that takes guests more than 500 feet above the beaches at speeds of up to 50 mph, a 300-foot saltwater waterslide and the Dragon’s Tail Coaster, a high-speed ride through 2,232 feet of tropical flora and rock formations. A marketplace features Haitian vendors.

Ships can dock at Labadee’s pier.

• Standout feature: Guests can experience Haitian culture on a variety of excursions that focus on Haitian arts and crafts, cooking, music and history. 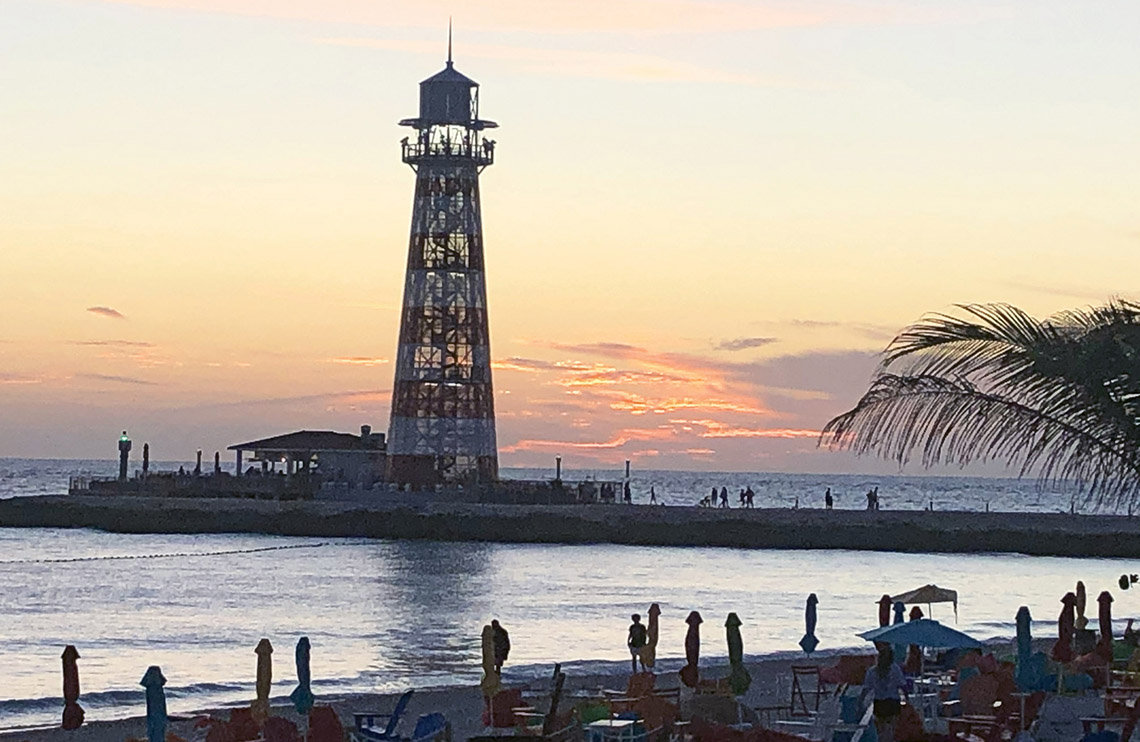 The cruise line spent four years transforming a former sand-excavation site into a tropical paradise and has committed to making the island a hub for coral restoration and marine conservation.

Guests can kayak, stand-up paddleboard, snorkel, play in beach volleyball tournaments, walk to the top of the lighthouse or get a massage in a beach cabana. There are 10 bars spread out on the island and complimentary food trucks near every beach.

MSC Yacht Club guests have their own part of the island with a private beach and restaurant.

• Standout feature: Ocean Cay is the only private island offering nocturnal activities on every call, so guests can have sunset cocktails at the Lighthouse Bar, watch a Bahamian Junkanoo “street parade,” watch two light shows put on by the 115-foot lighthouse, enjoy a dance party on the beach or go nighttime stand-up paddleboarding on boards fitted with LEDs. 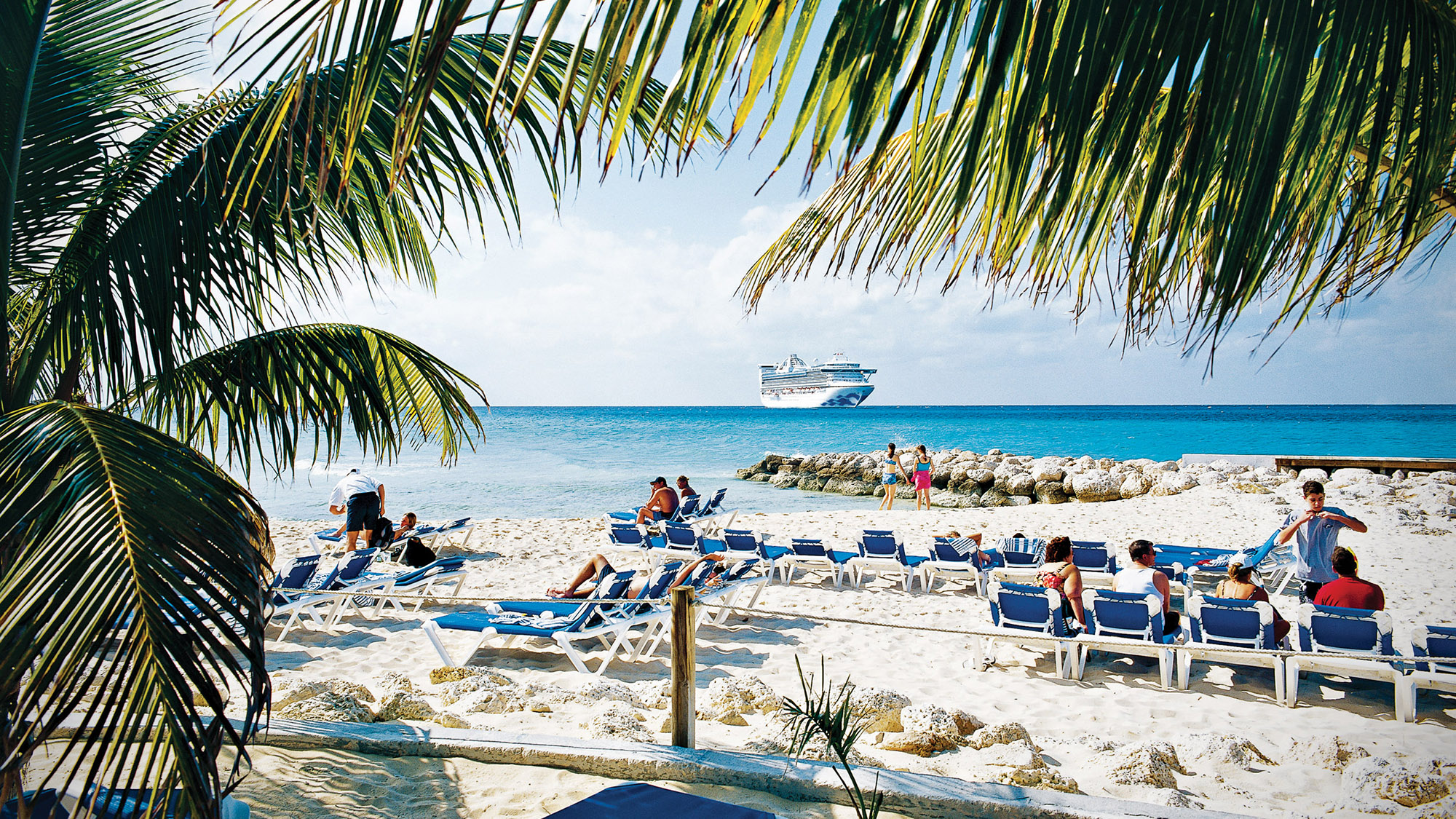 Princess Cruises’ private island lies on the southern tip of Eleuthera in the outer Bahamas. As with Half Moon Cay, Princess’ sister brands such as Carnival Cruise Line also visit Princess Cays.

Since 1992, Princess has been visiting the 40-acre private destination, which has a white-sand beach, a complimentary beach barbecue and activities including snorkeling, fishing and a stingray encounter. In 2018 it began offering the Lagoon Clear-Bottom Kayaking Adventure, a guided paddle through the lagoon and the Island Bicycle Adventure.

Passengers must tender to Princess Cays.

• Standout feature: Unlike most private Bahamian islands, Princess Cays guests can experience local culture by visiting small villages on Eleuthera such as Rock Sound, with its colorful buildings, or the fishing village of Tarpum Bay. 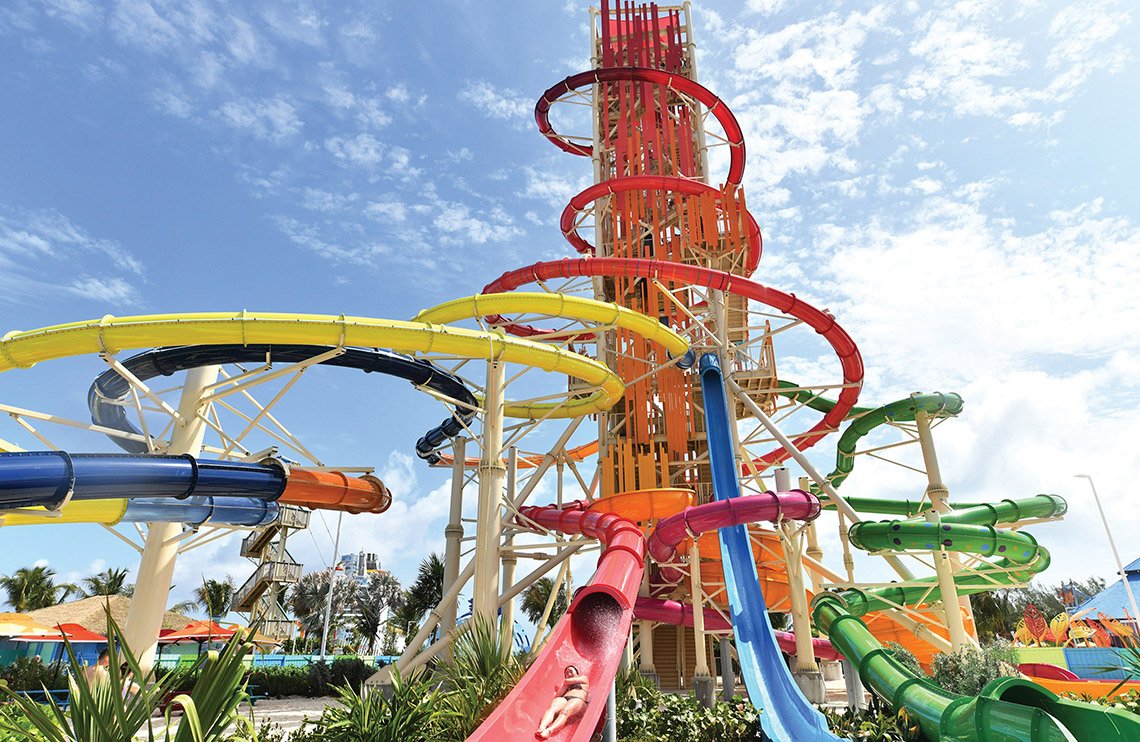 Attractions at Perfect Day at CocoCay, Royal Caribbean International’s Bahamian island, include the Daredevil’s Tower, which has seven single-rider waterslides.

When it debuted, it was with an array of superlatives: a waterpark with the tallest waterslide in North America and the most slides of any waterpark in the Caribbean; a helium balloon ride that offers the highest vantage point in the Bahamas (it rises to 450 feet above sea level); and at 28,000 gallons, the largest wave pool in the Caribbean.

After all those thrills, guests can head to Chill Island, with its cabanas and daybeds, or spend the day doing beach and watersports.

The exclusive Coco Beach Club has the first Floating Cabanas in the Bahamas.

Carnival Corp. operates two private ports in the Caribbean — Grand Turk in Turks and Caicos and its newest, Amber Cove in the Dominican Republic — that all of its brands can use but are most frequently visited by Carnival Cruise Line. 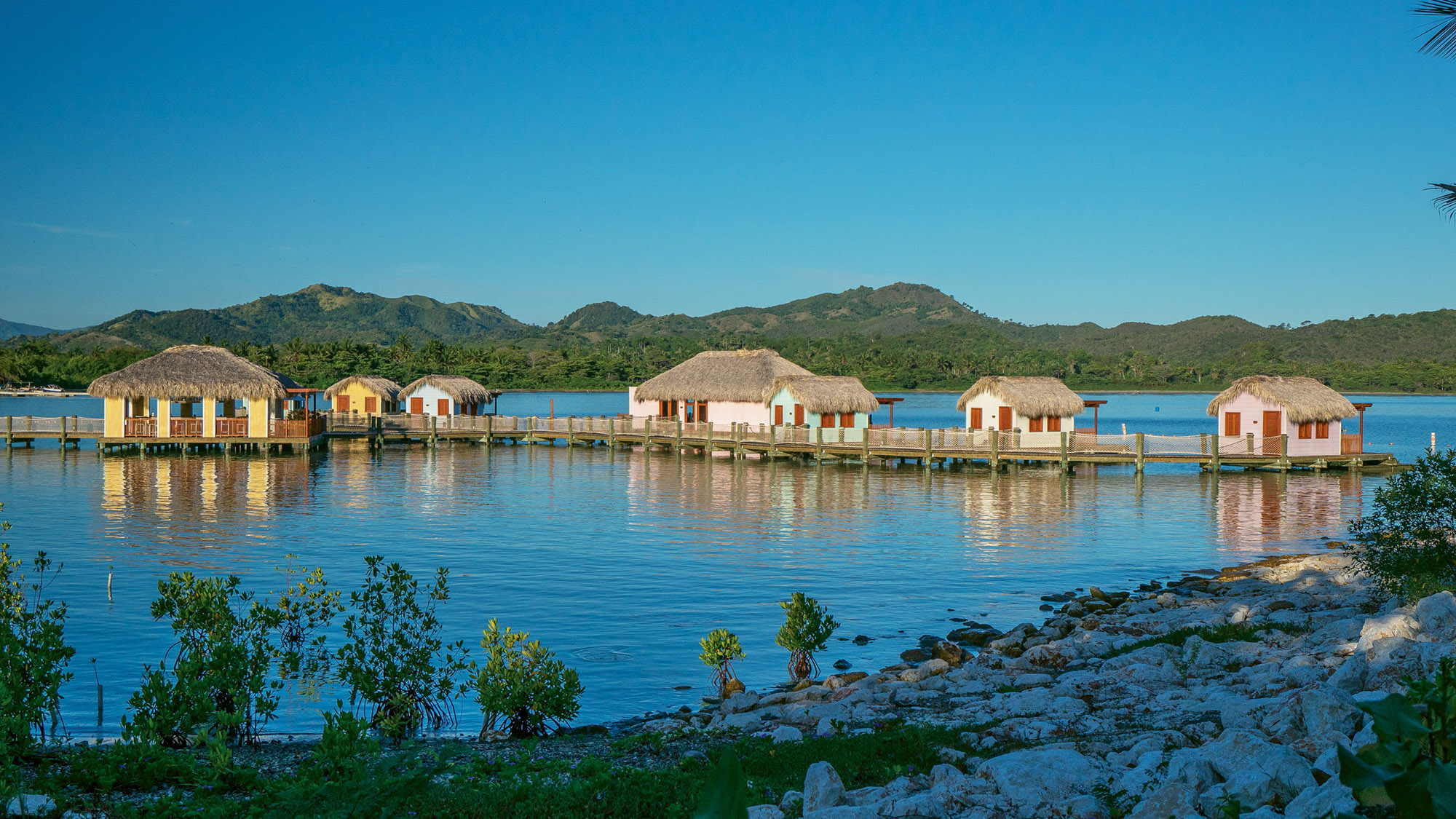 Carnival Corp. invested $85 million into Amber Cove, built on the Dominican Republic’s northern coast. which had not had regular cruise calls in 30 years. Now, the 25-acre property has an Aqua Zone pool has a swim-up bar, waterslides, a lazy river and a zipline. Shops offer arts and crafts by local artisans. The port doesn’t have its own beach, but there is a public one nearby.

Standout feature: Available for rent are overwater cabanas that have their own deck and outdoor shower. The largest, the 1,000-square-foot Grand Cabana, can accommodate up to 20 people and has a private hot tub. 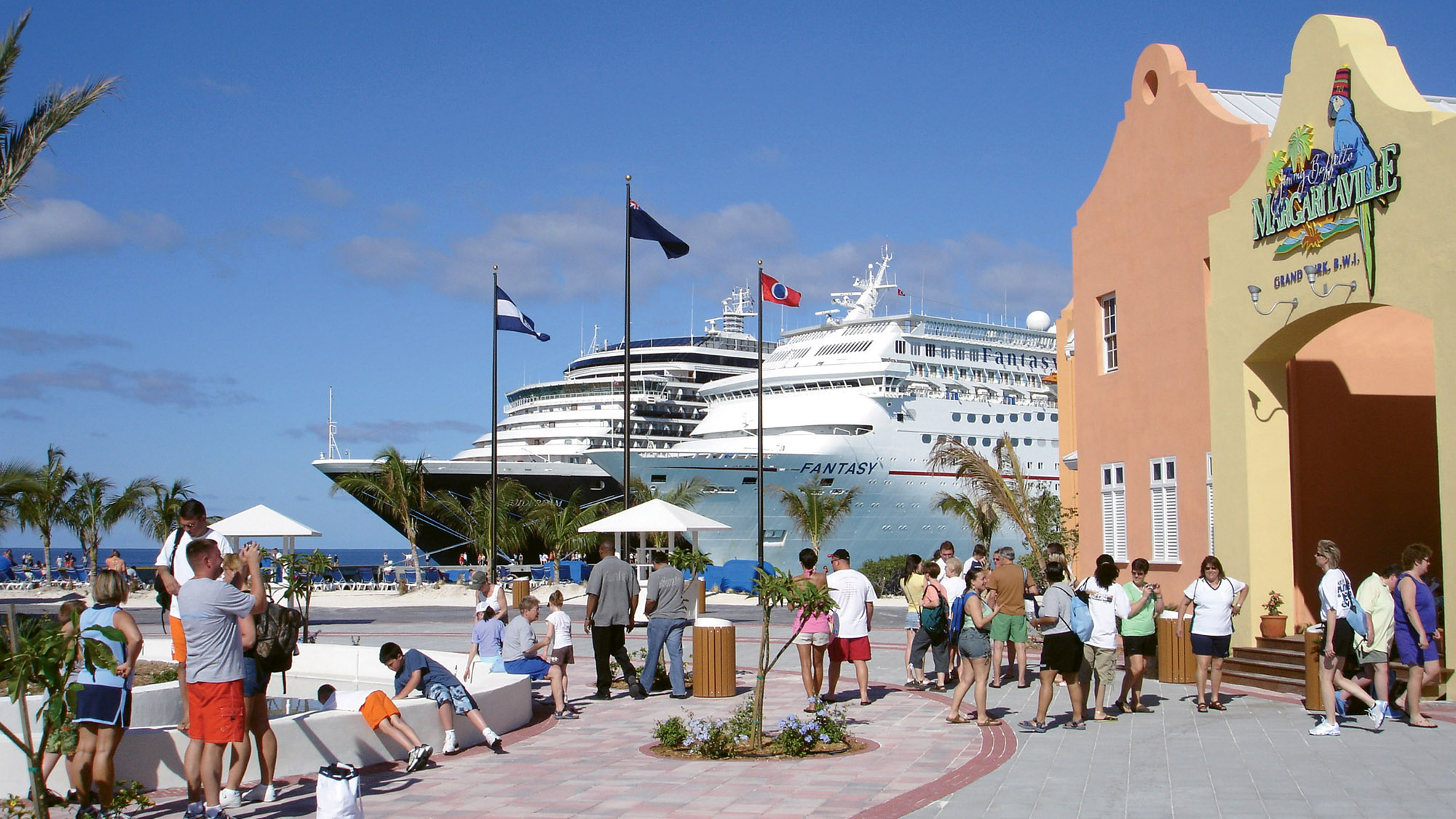 Margaritaville at Grand Turk, with a Holland America Line and Carnival ship in port.

At this 18-acre port, guests can snorkel, swim at the beach or in one of the Caribbean’s largest swimming pools. The port has private poolside cabanas and is home to the Caribbean’s largest Jimmy Buffett’s Margaritaville bar, restaurant and retail shop. There is a 45,000-square-foot shopping center offering duty-free shopping, jewelry stores and locally crafted souvenirs and gifts.

Standout feature: The Grand Turk FlowRider surfing simulator, which the port boasts is the only one of its kind located in a cruise facility.

Demand up for Middle East destinations