It seems simpler to try to describe the Queen Mary 2 transatlantic cruise by what it is not.

It is not a cruise.

But what it actually is, is harder to put into words. A vacation? Well, surely, it is that. An experience? Also true, but vague. A luxury? Yes, although not the same as you’d find on a smaller ship. A romance? Maybe, just maybe, that’s the right word for seven days and nights of open ocean, ballroom dancing and Champagne.

The Queen’s true purpose, the transatlantic crossing, has always been lurking in the back of my mind, a bucket-list assignment. An interview with Pamela Conover, then the president of Cunard, was one of my first assignments as cruise editor. In 2003 the excitement around the QM2’s upcoming launch was palpable. I flew to Saint-Nazaire, France, to see the ship in the yard; I went to an event where the QM2’s china pattern was unveiled; I went to the ship’s christening and a subsequent party in New York that featured the QM2, the Queen Elizabeth 2 and fireworks.

About 10 years later, my young daughter found my “Queen Mary 2 Book of Comparisons” on the shelf.

About the same time I interviewed Micky Arison, Carnival Corp.’s chairman, for a 10th anniversary cover story about the QM2.

Remarkable. Unique. Extraordinary. Those were words he used to describe the brand, the ship and its reception.

I liked Arison’s use of “relevant,” because despite Cunard’s heritage, which passengers can follow via historical photos and notes displayed in several of the QM2’s hallways, the ship is not old-fashioned or stuffy. Carnival Corp. builds ships for modern sensibilities, and the Queen takes a lot of that transatlantic nostalgia and translates it for the current cruise mindset.

The QM2 is fresh off a redo that Cunard elegantly called its “remastering.” Regulars will notice, and appreciate, the new Carinthia lounge and redone King’s Court buffet on Deck 7. Other enhancements include technical upgrades, a fresh paint job, a redo of the cabin soft goods (still ongoing) and, in a nod to current trends, cabins for solo travelers.

But true to Arison’s comment of relevance, the ship’s overall feel is unchanged: The plush red carpeting and the huge art deco paneling on Decks 2 and 3 still signal to passengers the Queen’s sense of grand occasion.

Remember, this is a crossing, or a voyage, not a cruise, according to the QM2’s master, Christopher Wells. And really, who would know better?

On our crossing, my family and I were headed east to Southampton, England, from the Queen’s Brooklyn, N.Y., pier. Some lines might offer tropical drinks during a sailaway party; Cunard sells Veuve Clicquot. Like the trip itself, it was celebratory in a classy way.

As we turned away from the shores of Long Island, I remarked to my husband: “This is the last time we’ll see land for a week.”

Ballroom dancing is a focal point of evenings on the Queen Mary 2, particularly on themed formal nights, such as black-and-white night. Many passengers head to the Queens Room, which Cunard says offers the largest dance floor at sea. Photo Credit: Rebecca Tobin

And then down from the top decks to dress for the evening ahead.

The dress-code requirements alone should be enough to qualify a good number of clients. Gentlemen were to wear jackets in the QM2’s restaurants nightly. Formal attire was requested on three of our seven nights, and on two of the formal nights a theme was involved: black-and-white one night, masquerade for another.

And although I understand and appreciate the trend toward resort-casual cruising, I do love a serious formal night. The ship seems to hum with a new energy: Passengers put time into their toilette, jewelry flashes, heels are high, people are extra polite and witty, perhaps a special bottle of wine is ordered for the table (the Queen keeps a selection of first- growth Bordeaux in its hold) and the dining room is full of what my aunt would call “sparkling conversation.”

The ship really shows its advantage when passengers head to the Queens Room ballroom. Yes, there are accomplished dancers among the passengers, and they have come to what my daughter called “the dance party” in dresses and tuxes to glide around the floor to the strains of the Queens Room Orchestra. For those who are poor at the waltz (ahem), dance classes are offered during the day.

As are fencing classes, on a first-come, first-served basis.

By Day 4, there was no question: We were lunching in the Golden Lion pub.

My husband without fail ordered the chicken tikka masala; I toggled between the portobello Wellington and the bountiful fish and chips. An A-plus beer selection rounded out the experience.

Dining, the finer the better, is not surprisingly a big part of the QM2 crossing. The Britannia is as grand a main dining room as they come, and the food is good to very good. Ordering more than one entree is definitely allowed. Don’t ask me how I know this.

Still, I doubt I’d miss the Britannia if I qualified for a seat in the Princess or Queens grills. The Queens Grill, especially, is first class, i.e., those who booked the top suites. And the atmosphere, plush furnishings and food reflect this. In fact, both restaurants and the adjacent grills-only lounge were touched up during the remastering.

A section of the Kings Court buffet is set aside in the evenings for a white-tablecloth dining service, at $17.50 per person, with rotating cuisine themes. This gem is not to be missed if Indian food is a favorite with you or clients (watch for Coriander nights).

The Verandah, formerly Todd English, is the special-occasion treat, at $20 for lunch and $50 for dinner. I recommend at least one night here. Right off the bat the server will suggest a glass of Champagne. Remember that this is the QM2 and that you are in the middle of the Atlantic. It would be unsporting to say no.

Also, one must make time for tea and room for scones. A string quartet played the day my daughter and I took tea in the Queens Room. The Veuve Clicquot lounge offers a Champagne tea. 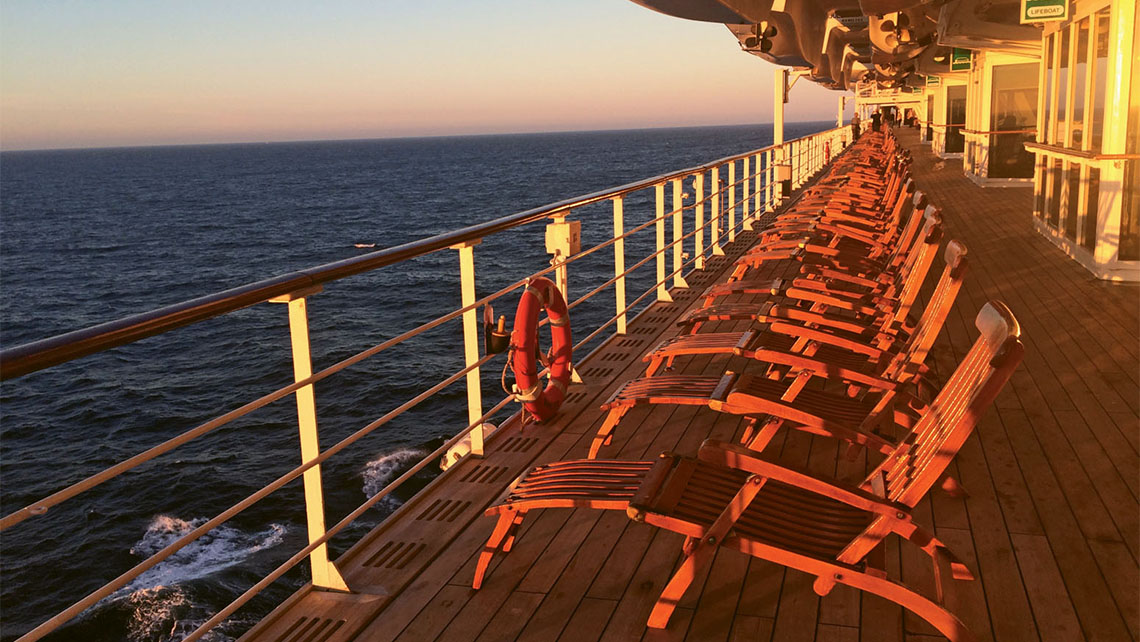 The QM2 includes a wraparound promenade with teak decking and comfortable chairs. It is sometimes too chilly and wet to enjoy the ship’s open decks, but on this trip the sky cleared and passengers were treated to a magnificent sunset. Photo Credit: Rebecca Tobin

But by then the Queen was our home. In the morning, we took a dip in the covered Pavilion Pool. By the time lunch was over our daughter would be champing at the bit to get to the Kids Zone.

I enjoyed walking the ship to gauge popular spots: the Carinthia Lounge, the Golden Lion when Premier League football was on, bridge in the Atlantic Room, the Library and the gym. I caught an abridged version of “Pride and Prejudice” performed by actors from the Royal Academy of Dramatic Arts. The planetarium, of course, is a must.

When we left New York the weather was hot and sunny, but at sea the temperature eventually dropped to the mid-60s, with cloudy skies. But when the open decks are chilly or closed, there are plenty of places inside for relaxation.

My Kindle and I often would end up at the Commodore Club, the forward lounge, where I would sit in a comfortable, white-leather armchair, peruse the cocktail menu, look out at the sea, read a few pages — and then let the ship rock me to sleep.

Does that sound boring? I found it a thrill. I have very little time in my life for reading or napping, let alone doing either with uninterrupted sea views and a bartender nearby. My phone and data were switched off, and my laptop was in a drawer in the cabin. I was unplugged, in the middle of the ocean.

Another favorite room in which to lounge in sumptuous settings was the Canyon Ranch SpaClub’s Aqua Therapy Center (a fee applies here). The pounding of the pool jets drowns out most conversation, any spa music and other worries or cares.

And then, suddenly, we neared the English coast.

The temperature didn’t rise much, but the sun came out and turned the sea from gray to a greenish blue. Gulls began to coast in our slipstream, and we saw other ships and small craft. The day was full of “lasts.” And finally, our last outfits came off the hangers for dinner.

But one last surprise was in store: We took a stroll around the promenade deck, and by chance we timed it perfectly with a glorious sunset.

One smart passenger donned her swimsuit to watch the sunset from the aft hot tub, and a handful of others leaned on the rail, took selfies or reveled in the chance to be in the right place at the right time, an ending almost worthy of a Hollywood movie.

And later, I reread an interview with Patrick O’Neill, the creative director behind the QM2’s first campaign, which featured women gowned in couture dreaming about their transatlantic crossing, and it resonated: “We wanted to create … the feeling of fame and escapism.”