Emphasizing that it is still premature to say when or where cruises are likely to resume and what the experience will be like, the CEOs of the two largest cruise companies offered hints recently about what a return to service could entail.

Arnold Donald, CEO of Carnival Corp., and Richard Fain, CEO of Royal Caribbean Cruises Ltd. (RCCL), in separate conversations delivered some similar messages, each pointing out that many of the decisions around a resumption will not be theirs.

First and foremost, it will be determined by the Centers for Disease Control and Prevention (CDC) and its regulatory counterparts in other nations.

“The reality is, it’s not so much when cruise decides, it’s when society decides it’s ready for social gathering,” Donald said.

Donald indicated that parts of Europe and China, which were hit by the virus first and are now reintroducing social gatherings, may be where cruising first resumes.

“Right now, if you watch the wave, you’d say China is closer to normal than anyone else,” he said. “Logically then, they might be the first. But Germany and Italy are getting there pretty quickly, and they may end up being the first. Or you might see a change here in the U.S. once things start opening up, and maybe in the end, Carnival [Cruise Line] is the first. So we don’t know.”

In the U.S. market, Fain said the first cruises are likely to be shorter sailings from drive markets. For RCCL, its private island in the Bahamas, Perfect Day at CocoCay, will be a prominent destination, given the company’s ability to “control everything” there.

“Everybody that works on that island works for us,” Fain said. “We can establish screening protocols, we can establish hygiene protocols. We can set standards that you can’t necessarily set in other destinations. From a starting point of view, it is nirvana.” 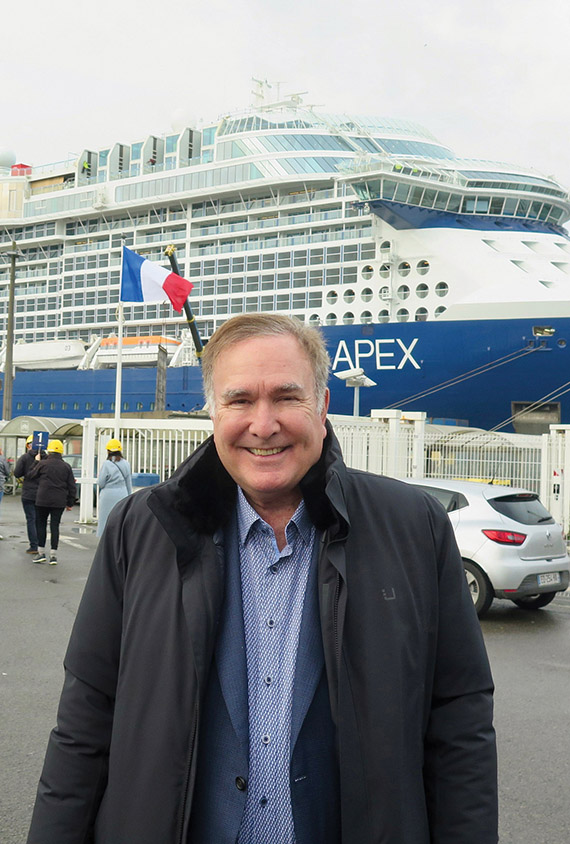 Both he and Donald stressed that scientists and medical experts will ultimately decide when cruise and travel in general can safely resume.

Donald said those experts will determine what protocols are necessary “to mitigate the spread of the virus to the point where society’s tolerance for risk is met.”

Society, he noted, is willing to take risks, as it does every day while driving cars and flying.

“That’s how you have to look at it,” Donald said. “Not only the science but also the societal tolerance for risk, and that varies from nation to nation and region to region.”

Both CEOs said they know that travel advisors and cruisers alike are itching to know what the cruise experience will be like when ships start sailing again, but neither wants to make any declarations.

Fain pointed out that one good reason cruises have not released plans about their reopening protocols, as some airlines and hotels have done, is that planes are still flying and hotels are slowly reopening around the world, while cruise ships remain idle.

“They need to talk about their protocols today because they’re operating today,” Fain said. “But we’re not, and I’d rather have more time, get it right and make sure we’re doing it cooperatively with the authorities than try to preempt it months before we start operations.”

Donald said another reason to hold off on making decisions is that the science around the virus keeps changing. For example, at first it was thought the virus could spread through HVAC systems, which was later determined to be of low likelihood, he said.

“What we know is when people get on our ships, they will sense and feel that our priority is excellence in public health and in protocols,” Donald said. “We want to be at least as safe, at least as good, in mitigation of risk, and hopefully even better, than other forms of social gathering. That’s our commitment. Exactly what that looks like, we have to let the scientists and medical experts guide us.”

A ‘hunger’ for cruise vacations

“There’s really a hunger out there,” Fain said, adding that despite the uncertainty in the immediate future, “people are eager to socialize again, and that’s where cruising comes in.”

Donald said that, initially, a reduced fleet size and social distancing protocols may work to tip the balance of supply and demand in Carnival Corp.’s favor.

“With less capacity at the beginning of whenever the restart occurs, it’s very logical to presume there will be excess demand for the capacity available,” he said, adding that the company saw the extent of that demand when “bookings went through the roof” after Carnival Cruise Line said that it was possible it would resume sailings in August, pending CDC and other regulatory approvals.

“So in the early startup period we’re not anticipating any demand issues,” he said, adding that high demand with limited capacity is “a good environment for pricing.”

Despite these positive signs around the demand for cruise vacations, Fain acknowledged that unemployment and the overall economy is of concern, given that a cruise is purchased with discretionary income.

“There’s no question we’re impacted by economic activity, and there is no question in my mind that you are going to see a weaker economy as we come out of this,” he said. “But this is also a very unusual situation because unlike prior economic downturns, the governments around the world are acting to stimulate the economies. I think that means that the length of any recession will be significantly shorter than it otherwise would be.”

Are Amex GBT’s UK Layoffs the Start of Much Larger Cuts Across Corp Travel Agencies?

Carnival spreads out the fun on the Mardi Gras