It’s a reality the travel industry knows all too well: Suddenly and without warning, a natural disaster, political crisis, violence or a disease upends tourism in a destination that had been selling well. And just like that, travel takes a nosedive.

Tour operators, packagers, cruise lines and travel sellers often have something of a workaround plan in place, a way to salvage at least some of their business when a destination goes bust. Mainly it just amounts to sending their clients elsewhere.

But for the destinations, there is nowhere to run when disaster strikes. They are often left picking up the pieces of a tourism economy that swung from extremely lucrative one day to barely a trickle the next.

“Many tour operators, [and] especially cruise lines, will just move to another destination, which can economically crucify [the damaged] destination,” said Rachel Dodds, owner of the Sustaining Tourism consulting firm and a professor at the Ted Rogers School of Hospitality and Tourism Management at Ryerson University in Toronto. “Currently, I am unaware of any international standard that protects destinations.”

Dodds said destinations that are more reliant on tourism are particularly vulnerable, and for them, the impact can be “catastrophic.”

After the 2004 Indian Ocean earthquake and tsunami, for example, “Thailand, a country which is very dependent on tourism, faced a massive decline, which crippled many businesses,” she said. “Responsible tourism practices and corporate responsibility of companies does help to counter this, but there is no standard, and the travel industry does not have a good track record in this regard.”

Most recently, the industry has witnessed how France in particular and Europe in general were impacted in the immediate aftermath of the terror attacks in Paris and Belgium.

It has also watched nervously as Latin America was forced to combat concerns about the mosquito-borne Zika virus in order to minimize the impact on much-needed tourism flows there.

And there are other examples. Egypt tourism has suffered due to political upheaval and security threats, African tourism was crippled by the Ebola crisis, Japan felt the sting of the 2011 tsunami, Mexico grappled with drug cartel violence, Nepal was battered by a severe earthquake and numerous other countries have experienced the highs of good times followed by abrupt lows of bad times.

Prior to the political upheaval in Egypt, sites such as the Temple of Karnak overflowed with tourists; foreign tourism dropped from a peak of 14 million in 2010 to under 10 million last year. Photo Credit: Michelle Baran

With an eye toward longer-term investment and involvement in certain destinations, there appears to be signs of increased awareness and action from travel suppliers to create and support plans to help destinations weather the inevitable travel storms.

Following the devastating earthquake in Nepal on April 25, 2015, the travel industry rallied to raise funds for and provide aid to the country. Efforts to stimulate a recovery, albeit a slow one, continue there.

In Mexico, the Mexico Tourism Board, regional destination marketing organizations, tour operators and local suppliers have become allies in times of crisis, showcasing ways they have found to aggressively overcome challenges at a rapid pace and welcome tourists back to the destination.

“Profit margins in the travel industry can be very slim, so doing everything possible to expedite recovery is key,” said Jack Richards, president of Pleasant Holidays. “In the case of Hurricane Odile [in 2014], the Mexican government and [the] Los Cabos Tourism Board worked quickly to help subsidize the restoration in Los Cabos. The all-hands-on-deck approach kept local workers employed in the recovery effort and the destination’s long-term goals on track.”

Richards also pointed to the Mexico Tourism Board’s recent proactive strategy with regard to the Zika virus: using trade, consumer and social media channels to educate people and abate fears in a way that helped calm a potential threat to tourism before it could become a major crisis.

In some cases, destinations can even emerge more triumphant in the aftermath of the crisis than they had been faring previous to it.

David Rome, director of sales for the New Orleans-based destination management company BBC Destination Management, recalled that after Hurricane Katrina, “money was coming into the city to not only fix problems with the levees but to rebuild our hospitality infrastructure. We had all-new inventory by 2007 that we would not have seen without the storm. Now, 11 years later … we have almost double the amount of restaurants than we did before Katrina. And the city is building and redesigning the way it works and looks.” 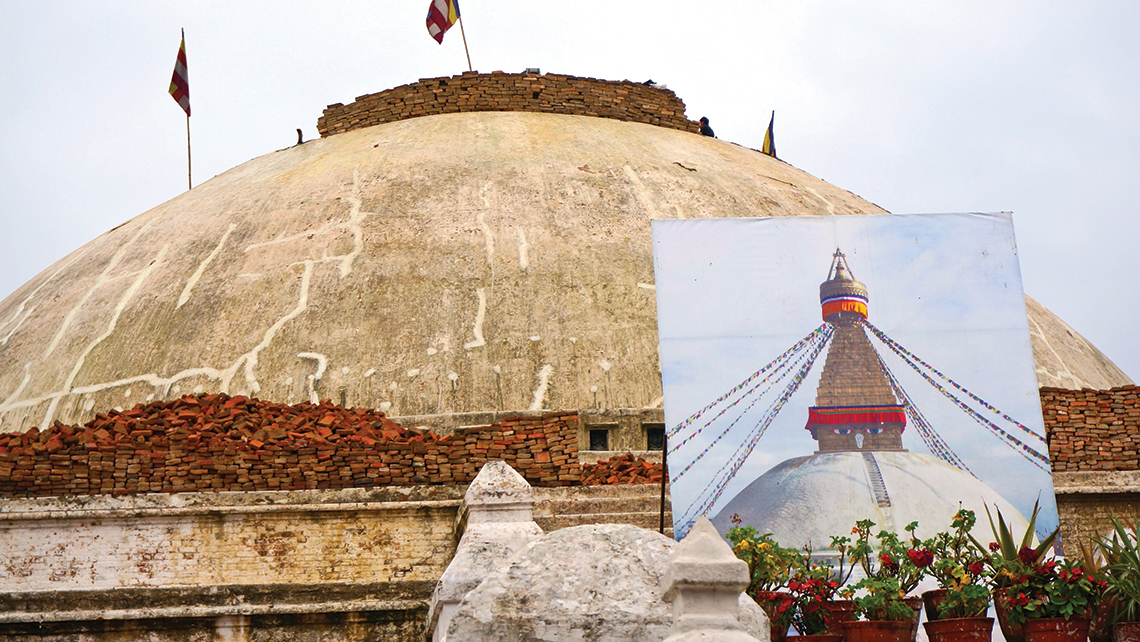 Before and after: In Kathmandu, Nepal, Boudhnath’s great stupa is undergoing reconstruction to fix structural damage caused by the April 2015 earthquake. Photo Credit: Jeff Greenwald

The cost of inadequate response

Not all destinations are lucky enough to have that kind of support.

Egypt, for example, represents one of the more extreme cases in recent years of a destination where highly promising tourism prospects vanished almost overnight following the political upheaval that started in 2011. The country saw its tourism industry fall from its best year in 2010, when the country welcomed 14 million international travelers, to a modern low of 9.2 million tourist arrivals in 2013, according to the World Tourism Organization.

Five years later, having experienced a series of setbacks that continue to tarnish its image as a vacation destination, Egypt still hasn’t fully recovered; its international tourist arrivals were still below 10 million last year.

And according to Ashish Sanghrajka, president of Big Five Tours & Expeditions, the industry’s lack of a coordinated recovery effort in Egypt bears part of the blame.

“This is about all the suppliers coming together if it’s a particular country in distress and saying, ‘We’re going to band together as one voice.’ In the case of Egypt, there’s been no banding,” Sanghrajka said. “It’s been the race to the bottom. When a country goes into a downward spiral, every company, big and small, [should] form a task force, [even if we are] competing companies. It doesn’t matter. We put all of it aside. The onus of doing it is on us.”

Sanghrajka explained that the problem in Egypt, and often in other destinations that experience setbacks, is that a lack of commitment to the destination and to maintaining higher standards of product can lead to extreme discounting and an undermining of the overall quality of the product.

“It takes five years to mathematically recover a 10% cut in prices,” Sanghrajka said. “Once you start discounting, your client changes, and most importantly, so does your competition, usually not for the better.”

When destinations begin to recover from a crisis, he said, “the hardest challenge is getting pricing back to parity. If you have discounted, you now have to find a way to get out of that game.”

Despite the relative unpredictability of catastrophic events that can severely impact destinations, their inevitability is well known, and there is never a year that goes by without at least one. Yet there often seems to be little advanced planning for calamity and the economic devastation to tourism that can result.

“Our industry is so unpredictable, yet we sometimes get into this naive mode of ‘what goes up keeps going up’,” Sanghrajka said. “If you grow 30% in a rebound year, don’t base your strategy on continuing that growth curve. The faster the peak, the faster the fall.”

In order to prevent a ruinous ripple effect, many tour operators and suppliers, especially those burned in the past, have been working to diversify their product portfolios so as not to have all their eggs in one destination basket.

“Pleasant Holidays’ economic approach to riding out challenges that can arise has been to strategically diversify its product line in recent years,” Richards said. “This has allowed us both to offer the destinations travelers want most and to have alternate options available in times of need.”

Along those lines, Pleasant Holidays has expanded from a Hawaii, Mexico and Tahiti specialist to offering a product line that includes 23 islands in the Caribbean, four destinations in Central America, 14 countries in Europe, cruise vacations worldwide and vacation packages throughout Canada and the U.S.

And other suppliers have done the same, expanding their destination offerings to include numerous countries and/or continents that they can offer as an alternative to a destination that has run into trouble.

As for the troubled destination itself, while no one has a crystal ball as to when, where and to what severity a disaster might occur, according to Marty MacKay, president of the Washington-based destination management company Hosts Global Alliance, there are ways destinations and suppliers can and should prepare in order to minimize the damage.

“If possible, having [a] diversified business is always helpful as well as a solid business continuation plan,” MacKay said. “A good business practice is to plan for cash reserves to keep your company running and for post-event marketing to help communicate to clients when and why it is safe to return.”

BBC Destination Management’s Rome also suggested that travel businesses stow away a year’s worth of capital for unpredictable disasters, “because trust me, it will come, and you won’t be prepared,” Rome said. 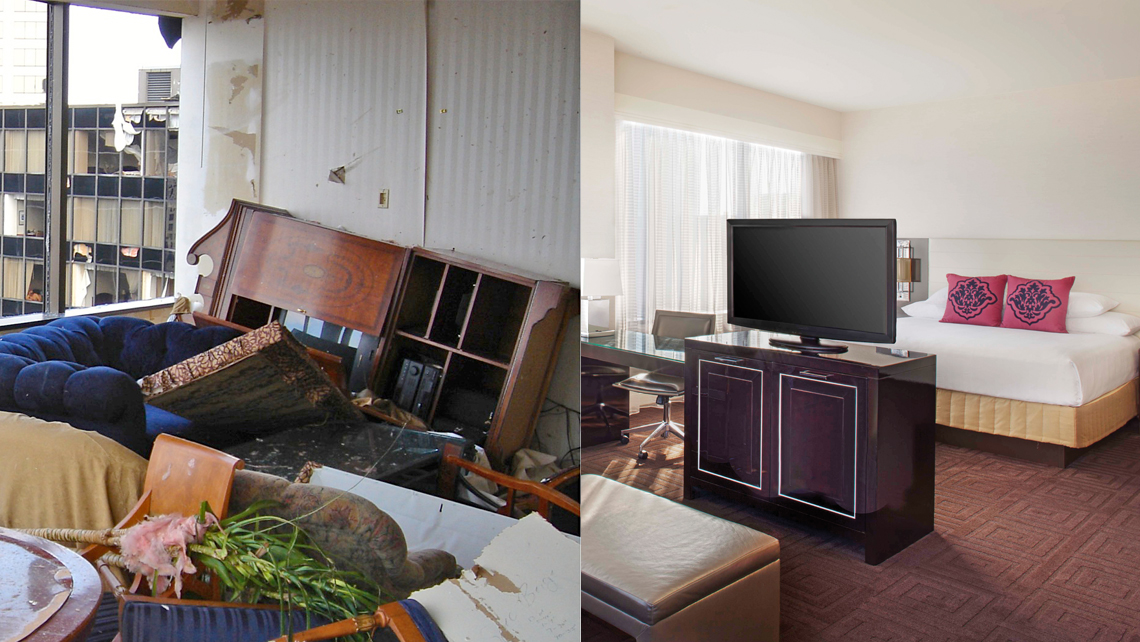 The Hyatt Regency New Orleans is an example of a hotel that was able to recover after a natural disaster. The Regency closed in December 2005 after it was damaged by Hurricane Katrina, left. It was shuttered until a $285 million renovation, right, enabled it to reopen in 2011.

One of the biggest challenges in times of a rapid drop in tourist arrivals is how to manage the tourism workforce on the ground. In the short term, suppliers might feel they need to lay off staff to control costs, but they could very well need those trained workers back once business starts to return.

As Richards suggested, one option is to employ that workforce in any rebuilding efforts that are needed if a destination has been physically damaged, such as in the aftermath of a natural disaster. There is also the opportunity to have them engage in maintenance work or help upgrade properties or infrastructure as the destination waits for a return of tourism revenue.

“In New Orleans, I have seen all of my vendors try their hardest to keep their employees during slowdowns,” Rome said.

“We have cut pay and/or 401K matching to keep payroll down, but not let anyone go,” he said. “But that doesn’t always save the day. Sometimes the hard decisions need to be made and layoffs do happen.”

If the downturn is longer term, such as in Egypt, a disenchanted workforce might leave the travel and hospitality industry altogether to find work in other sectors because they are financially incapable of waiting out the storm.

But the overwhelming consensus about what ultimately makes the difference between a slow and fast recovery, about what destinations can do to minimize the damage, is proactive and transparent marketing and communications to restimulate demand.

While most admit that some degree of discounting can help for the short term, if destinations and the people and businesses in the tourism industry that they support are going to fully rebound, they need to effectively reinvent themselves in the aftermath of disaster.

“When there is a crisis,” Sanghrajka said, “the tourism boards must have damage-control protocol that focuses on frequent communication of the facts, not propaganda. Suppliers need the facts to be able to manage their own communications. The ideal strategy is storytelling and education.”

Why Small Businesses Are Essential to Tourism’s Recovery – Skift

Sri Lanka is ready to welcome foreign tourists once more