ONBOARD THE HARMONY OF THE SEAS — The brand-new Harmony of the Seas,
currently holding the title as the world’s biggest cruise ship, is technically
a sister ship of Oasis-class twins Oasis and Allure.

But more than six years have passed since the Allure
sailed out of the yard; and since then Royal Caribbean International has launched
another ship series, the Quantum class, which incorporated new guest technology
and amenities.

The Central Park neighborhood is an oasis of green within the ship. Photo Credit: Rebecca Tobin

The Harmony is like a Quantum-Oasis combo: The size and
layout of the Oasis (albeit slightly larger at 223,963 gross tons and 5,479
passengers) with many top features of the Quantum ships.

The speedy check-in process that premiered on the Quantum
in New Jersey was working well here at the Southampton terminal. Restaurants
Jamie’s Italian and Wonderland (expanded to two decks on the Harmony) are both on
the Harmony. Royal preserved the open, three-deck main dining room from the Oasis,
though each floor has a different design that corresponds to one of the
contained restaurants on the Quantum.

On the Oasis-class side, the Promenade, Boardwalk and
Central Park neighborhoods are here. Rising Tide, a bar masquerading as an elevator,
floats between the Promenade and Central Park. Caffeine addicts will be happy
to know that a Starbucks, which first opened on the Allure, is planned for the
Harmony’s Boardwalk. 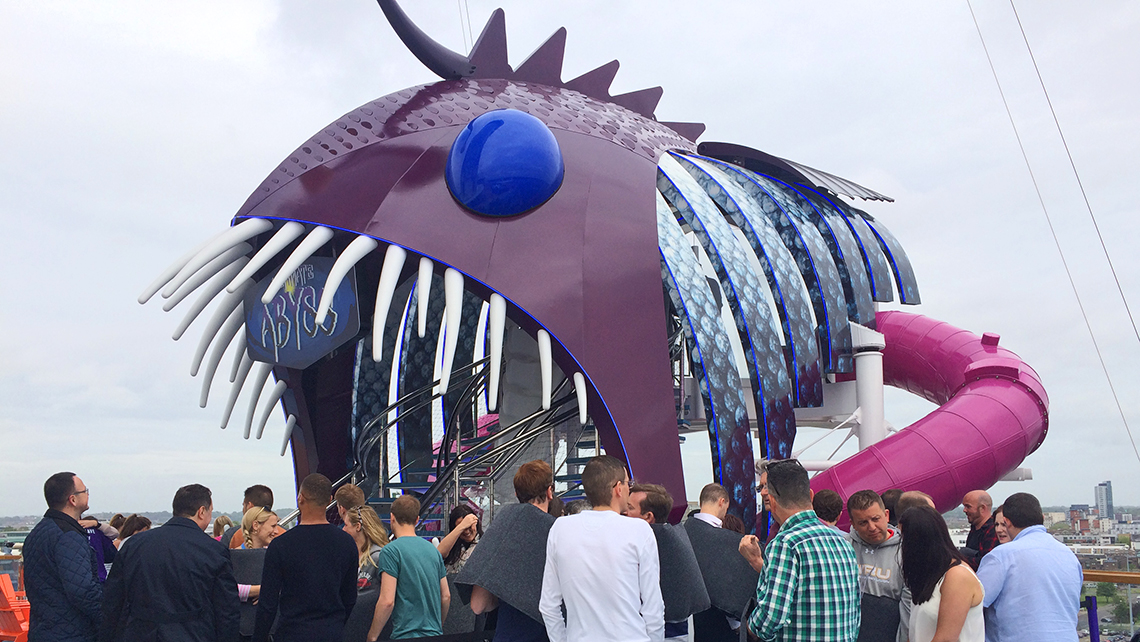 Passengers line up for their turn on the Abyss slide. The entrance is through the mouth of an anglerfish sculpture. Photo Credit: Rebecca Tobin

But one can even take a longer view of the Harmony’s
offerings, which I did on the first day of a two-day cruise from England, when some media
and European travel agents were invited by Royal to preview the vessel.

For example, the general structure of the long, interior
Royal Promenade is still going strong. The robot bartenders at the Bionic Bar
whir and mix and shake and pour across the hall from one of Royal’s longest
mainstays, the decidedly old-school Schooner Bar. The Latin-themed Boleros,
which made its debut on the Navigator of the Seas, is down the hall. On the
lower decks is the ice-skating rink, and up top is the rock-climbing wall, the
two features that broke molds at Royal and, arguably, the industry when they
debuted on Voyager of the Seas.

Royal has continued to refine its
“neighborhood” concepts on the Harmony. For an escape from the
busy-ness of other parts of the ship, nothing beats Central Park, a 12,000-tree
midship oasis (this is also where two upscale alternative restaurants, 150
Central Park and Chops Grille, are to be found). 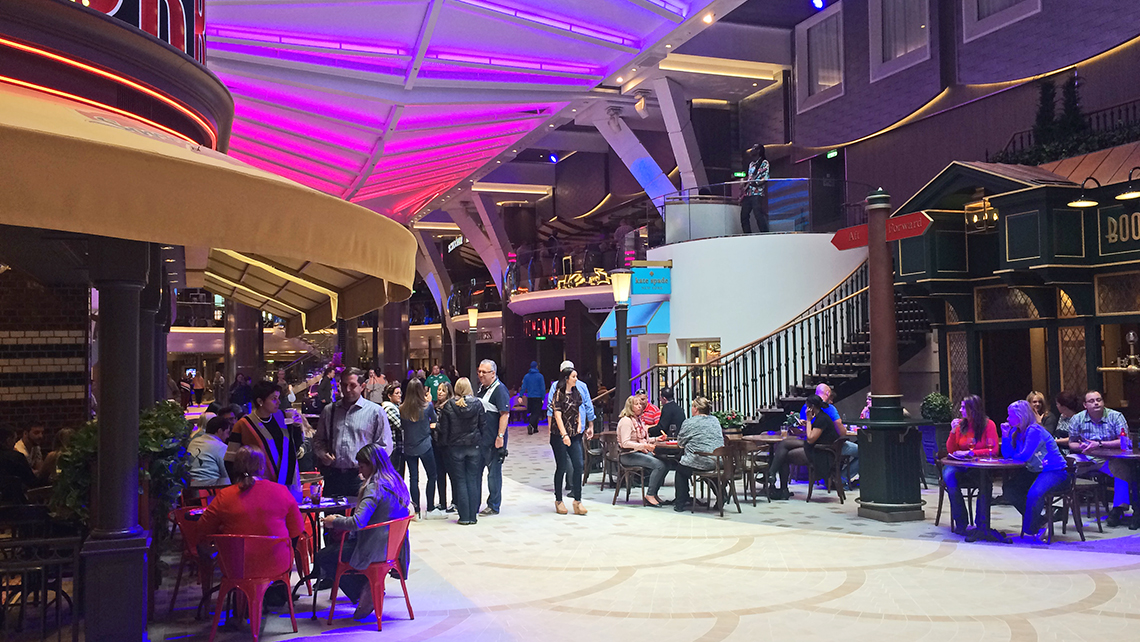 If busy-ness is what you’re after, proceed directly to
the sports deck, which contains miniature golf, a zipline, two FlowRiders and
one of the Harmony’s showcase features, the 10-deck Abyss slide.

(Also new on the Harmony is a group of three of waterslides called the Perfect Storm, but since it was a breezy 60 degrees, most passengers were content to admire
them from afar.)

The entrance to the two Abyss tube slides are encased in
a colorful metal structure that looks like an anglerfish. The entrance, of
course, is through its mouth. Each rider is given a mat that acts like a
toboggan, and they’re required to sit on it and hold the reins for dear life. The
ride is fast and furious. And, dare I say, awesome. 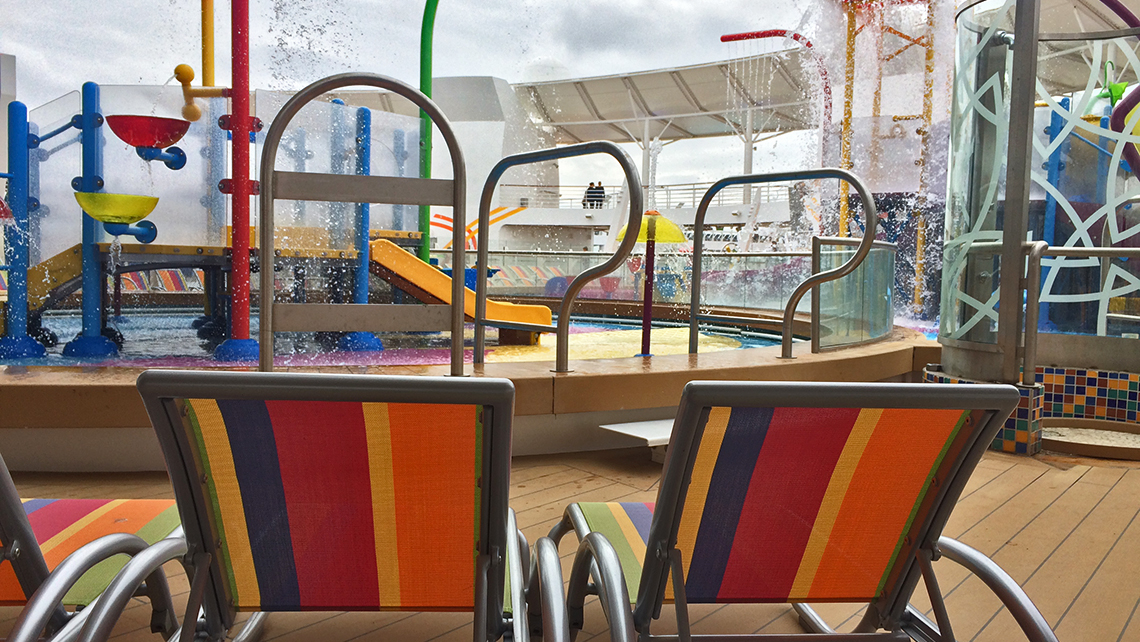 Kid-sized lounge chairs were set up next to the splash park. Photo Credit: Rebecca Tobin

The tube starts
out bright with LED lighting, but about halfway through riders are plunged into
pitch black and the mat picks up tremendous speed; that’s when most will let
out a scream or “wooooo!” that can be heard back in the anglerfish’s
body on Deck 16.

“There we
go,” the crew members said and nodded with satisfaction whenever the
“wooooo!” wound up from inside the tube.

The slide ends in
the Boardwalk neighborhood on Deck 6. Some riders might stagger right into the
perfectly-positioned adjacent Sabor restaurant for a stiff (or celebratory)
margarita. 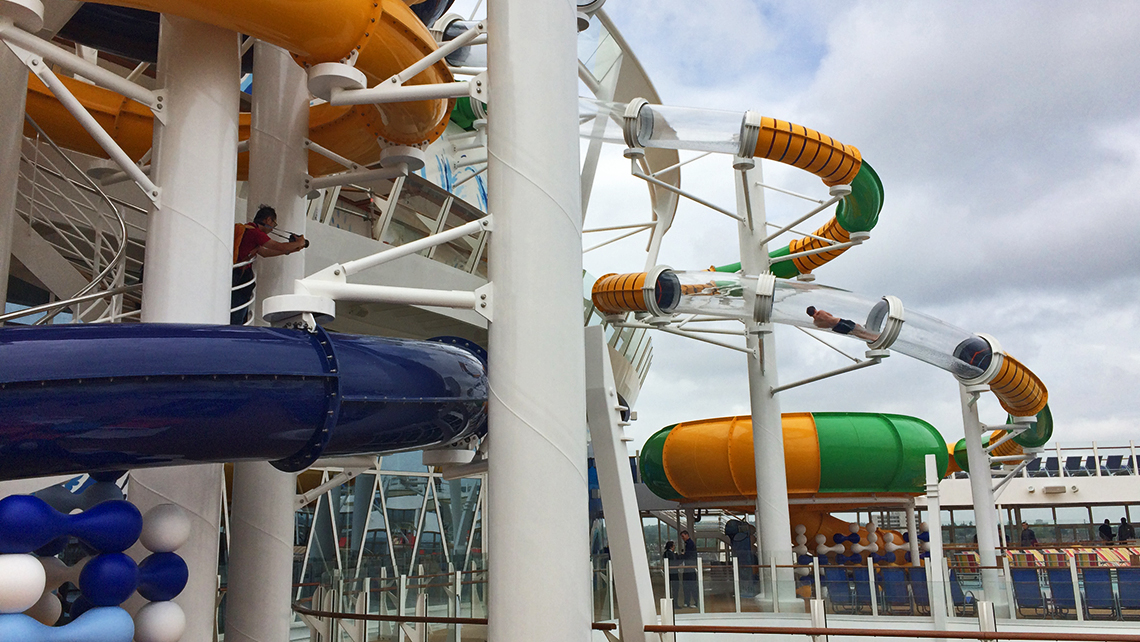 A guest braved the chill for a turn in one of the Perfect Storm waterslides. Photo Credit: Rebecca Tobin

‘Live it’, a six-week trip in St Lucia, Carribean