ABOARD THE INDEPENDENCE OF THE SEAS — In a two-day preview
cruise for British, Irish and European travel agents, Royal Caribbean
International unveiled changes from a 30-day, $110 million renovation of the
Independence of the Seas that eliminated a half dozen venues and functions.

Among the venues that were axed, moved or drastically
altered were the ship’s chapel, mini-golf course, photo gallery, a juice bar,
the disco and the Sabor restaurant.

The Independence is the first ship to gain Royal Caribbean’s
new Royal Amplified package of amenities, the most prominent of which is the
bungee trampoline attraction Sky Pad.

The overhaul, which included $16 million in marine and
technical work, is believed to be the most Royal Caribbean has ever spent in a
single ship renovation.

The Sky Pad, a bungee trampoline apparatus used with virtual reality goggles, adds a new dimension to the profile of the Independence of the Seas. Photo Credit: Tom Stieghorst

A favorite in the U.K. market, the 10-year-old Independence
will sail summers from Southampton and winters in the Caribbean.

The biggest change to the 152,000-gross-ton ship is the
addition of a package of activities on the upper rear deck, including the Sky
Pad, two tubular water slides and some lesser items, such as the Sky Climber
apparatus and some hammocks and swings. The ship’s FlowRider is also in the
area.

To make room, the mini-golf course was relocated to the
upper deck on the bow, and a bar and some storage lockers for sports equipment
were eliminated.

The mutli-colored perforated dome of the Sky Pad alters the
profile of the Independence, and gives guests a chance to bounce on one of four
personal-sized trampolines while watching programs on virtual-reality goggles.
It cost roughly $5 million to develop and install.

Royal Caribbean officials aboard were excited about the
reception for the Playmakers Bar & Arcade, an expansive sports bar that
attracted an overflow crowd for a soccer match. Playmakers was built out of the old photo gallery on Deck 4, which has
been relocated and downsized as a digital outlet.

High atop the ship on Deck 15, in a hidden space where the
chapel used to be, Royal Caribbean has created a puzzle room attraction called
the Observatorium, in which game players have a limited time to figure out how
to escape from the room.

A new casual restaurant, Fish & Ships, serving deep-fried
seafood, was added where a juice bar used to be on the pool deck.Another new
restaurant, the sushi and teppanyaki concept Izumi, has been added, replacing
Sabor, a Mexican restaurant that wasn’t doing very well, said Royal Caribbean president Michael
Bayley. Izumi was carved out of the top floor of a two-level disco, while the
bottom floor was rebuilt as new accommodations.

The children’s water play area on the Independence, formerly
the H20 Zone, has been enlarged and improved as the Splashaway Bay.

A former cigar lounge outside the Star Lounge has been
repurposed as the library, which was formerly located near the Atrium Bar.

Another component of Royal Amplified will be the Sugar Beach
candy store, launched on the Symphony of the Seas last month and now open on
the Independence. 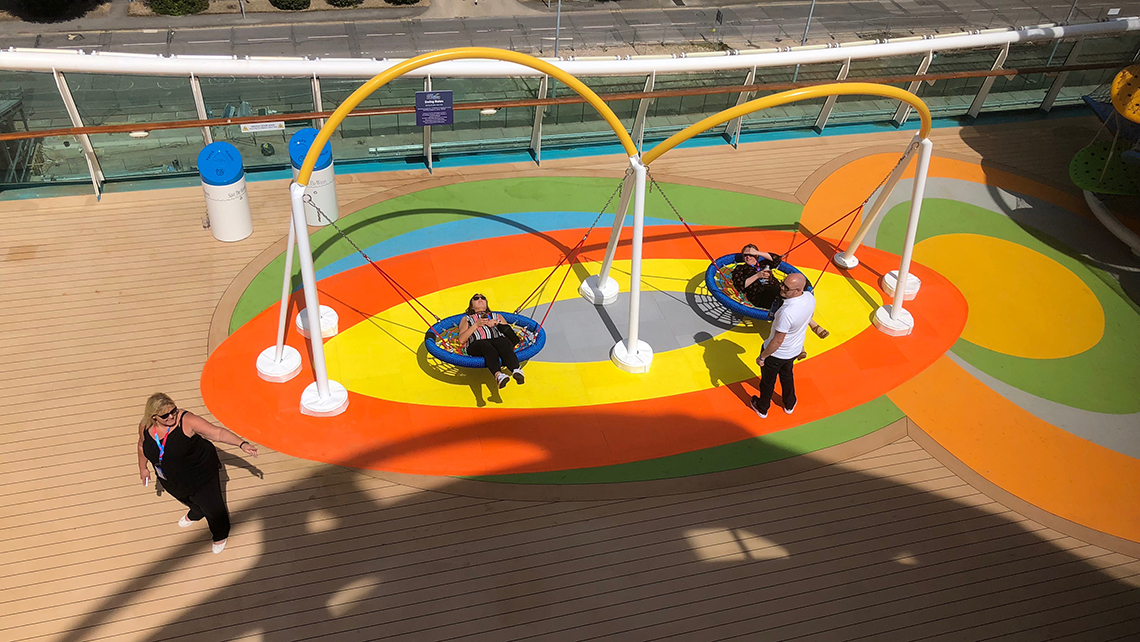 New swing chairs on the Independence of the Seas were part of a $110 million overhaul. Photo Credit: Tom Stieghorst

Bayley said a total of 107 new cabins have been added to the
Independence, mostly by building a new cabin block at the front of the ship
above the gym, but also from squeezing space in the refurbishment to add a
cabin or two here and there.

Royal Carbbean’s next ship to receive the Royal Amplified
treatment, the Mariner of the Seas, is already in drydock, and will emerge to
serve the short-cruise market from South Florida this summer. It will be
followed by Navigator of the Seas.

Bayley said Royal Amplified will touch 10 Voyager-, Freedom-
and Oasis-class ships over the next three years at a budgeted cost of $900
million.

Empress of the Seas back in service