Royal Caribbean International’s Navigator of the Seas will
emerge from a $115 million drydock with the line’s first water coaster, a
feature that previously only Disney Cruise Line has offered.

The coaster, to be called The Blaster, will run some 800
feet making it 35 feet longer than Disney’s Aqua Duck.

Other changes to Navigator include a blow-dry bar on the
Royal Promenade to be called To Dry For, a two-story poolside bar concept
called The Lime and Coconut, and the first Johnny Rockets Express, also
poolside.

A second slide on the Navigator called Riptide will be a headfirst mat
racer, a new format for cruise ships, Royal Caribbean said. Other water slides
at sea are either body slides or use a raft or inner tube for sliding.

Mat racers “pack a high volume of fun into a compact
footprint,” according to WhiteWater West, one of the builders of water slides
for the cruise industry.

Until only a few years ago, Royal Caribbean eschewed water
slides while other cruise lines reveled in them. Royal Caribbean’s first ship
with a slide was a retrofit onto Liberty of the Seas in 2016. But now it
appears intent on catching up.

Water coasters differ from slides because they provide not
only descents, but ascents as well, by using water jets to propel riders
uphill. They take a lot of space. Disney’s aqua coaster encircles the entire
pool deck of the Disney Dream and Disney Fantasy.

The Lime and Coconut will be a two-level poolside bar.

The Blaster makes use of curves and a hairpin turn at the
end to confine its length to the back third of the Navigator. A rendering shows
a translucent yellow and purple slide that starts from a modernistic central
stair tower. Riders slide on two-person rafts along The Blaster, which
alternates between open and enclosed sections.

In the ride’s later stage, it runs mostly open outside the
edge of the ship, before hitting the final enclosed hairpin turn and reaching
the runout.  Royal Caribbean’s signature
rock climbing wall and FlowRider surfing simulator are also on the back of the
upper deck.

That would include To Dry For, which Royal Caribbean calls
the first stand-alone blow-dry bar at sea, offering blowouts, hairstyling and
polish changes while serving a selection of wines and champagne.

Renderings for The Lime and Coconut show a bar with Bahamas
shutters on the pool deck, with a roof area above that is surrounded by a white
metal railing and strung with lines of white lights overhead.

Johnny Rockets Express provides the first poolside location
for the hamburger-centric diner, giving it a similar profile to the Guy’s
Burger Joint restaurants on Carnival Cruise Line ships. The Navigator will also
have an El Loco Fresh restaurant on the pool deck.

The Polynesian-flavored Bamboo Room, first introduced this
year on the Mariner of the Seas, and the Playmakers Sports Bar & Arcade,
which debuted with the Symphony of the Seas launch in April, will also appear
on the Navigator.

Royal Caribbean said the Navigator’s children’s play areas
have been revamped to make them more open, while the teen club was redesigned
and given a new “hidden” entrance and outdoor deck. 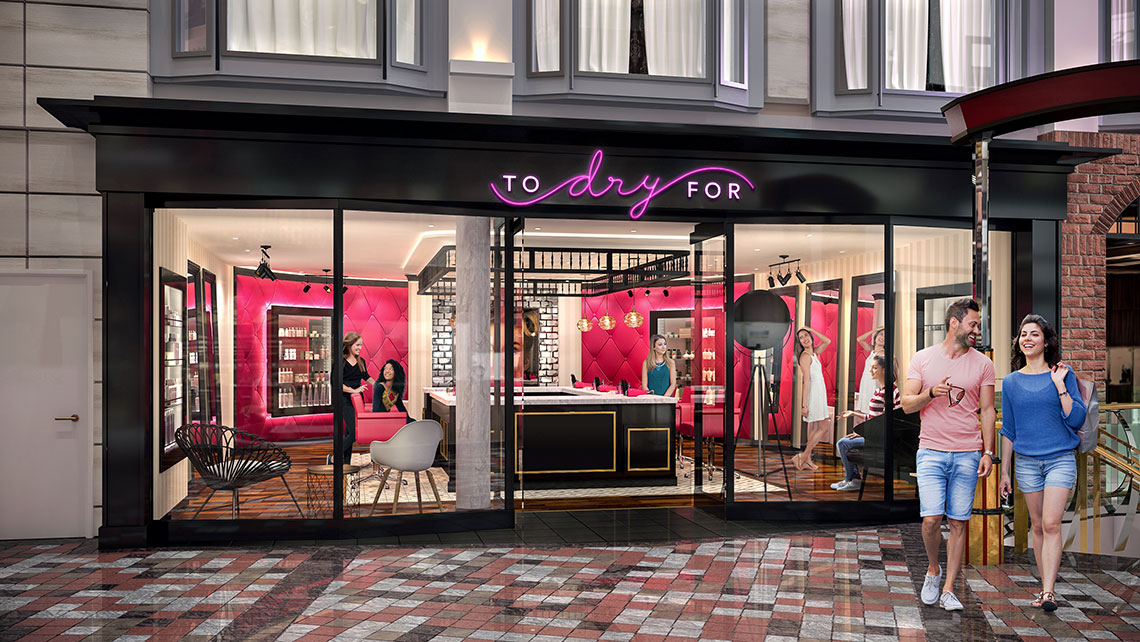 To Dry For, a blow-dry bar concept, will be a first at sea.

Royal Caribbean’s second Hooked Seafood restaurant (after
Symphony) is being added to the Navigator, and a new Starbucks is in the mix.
Glow-in-the-dark laser tag in Studio B, mini-golf and the Observatorium escape
room are some of the added activities.

The Navigator will return to service on Feb. 24, 2019, when
it will begin a series of five- to nine-day Caribbean cruises from Miami. In
May, when the Mariner of the Seas moves from Miami to Port Canaveral, the
Navigator will assume its three- and four-day short-cruise schedule.

The Navigator is the third of 10 ships scheduled for major
overhauls in a $1 billion Royal Amplified refurbishment program that began with
the Independence of the Seas and Mariner of the Seas earlier this year.

Good fun that is funny: Carnival Horizon to have Dr. Seuss water park