When TripAdvisor announced earlier this month that it would stop selling hundreds of animal attractions, it became one of the largest travel brands to take a stand against the commercial exploitation of animals. The challenge in taking that stance is that demand among tourists for encounters with wildlife remains strong.

“We know there is still a growing demand,” said Julie Middelkoop, global head of the “Wildlife — Not Entertainers” campaign at World Animal Protection, the advocacy group that has been putting pressure on travel companies, including TripAdvisor, to stop selling what it deems some of the cruelest animal encounters: riding elephants, taking tiger selfies, walking with lions, holding sea turtles and attending performances by dolphins, dancing monkeys and snake charmers.

Indeed, Barry Karp, co-owner of ShoreTrips.com, said that many of the animal encounters the company sells as shore excursions to cruise passengers are up year over year. Dolphin experiences were up 4%, whale-watching trips were up 12%, and camel rides were up 200% from Oct. 1, 2015 through Sept. 30, 2016, compared with the same period a year earlier. Dog trips, mostly dog sledding in Alaska, were also up 50%.

The dolphinarium at the Grand Sirenis Riviera Maya Resort & Spa in Mexico. ShoreTrips.com said dolphin encounter sales were up 4%.

With a large number of travelers still seeking these experiences, dropping them is often a money-losing endeavor, at least at first.

“It did have an impact on a couple of key trips initially after we said we are not going to offer elephant rides any more, and initially, we did take a financial hit,” said Darrell Wade, CEO of Intrepid Travel, which stopped offering elephant rides in 2014. “We saw a drop in demand for those tours. It took us a while to explain our reasoning to travel agents about why other tour operators offered elephant rides and we didn’t.”

That doesn’t make the job any easier for animal rights groups such as World Animal Protection, which earlier this year launched a petition that was signed by more than a half-million global supporters urging TripAdvisor to stop profiting from the sale of wildlife tourist attractions. That number would suggest there is, in fact, a growing number of consumers for whom the issue of animal welfare is increasingly important.

And according to Middelkoop, in places where World Animal Protection and other animal advocacy organizations such as People for the Ethical Treatment of Animals (PETA), have been campaigning the hardest — namely Europe, North America and Australia — there is.

Consequently, high-profile companies such as SeaWorld Parks and Entertainment and Feld Entertainment, parent company of Ringling Bros. and Barnum & Bailey Circus, have made major changes to their animal acts this year under pressure from the media and the public. SeaWorld ended its orca shows, and Asian elephants are no longer performing for Ringling Bros.

In early October, the New York City Council took up a bill that would prohibit the commercial exploitation of all exotic animals, effectively putting an end to all circus animal acts in the city. No timetable was set for the council to act on the statute. 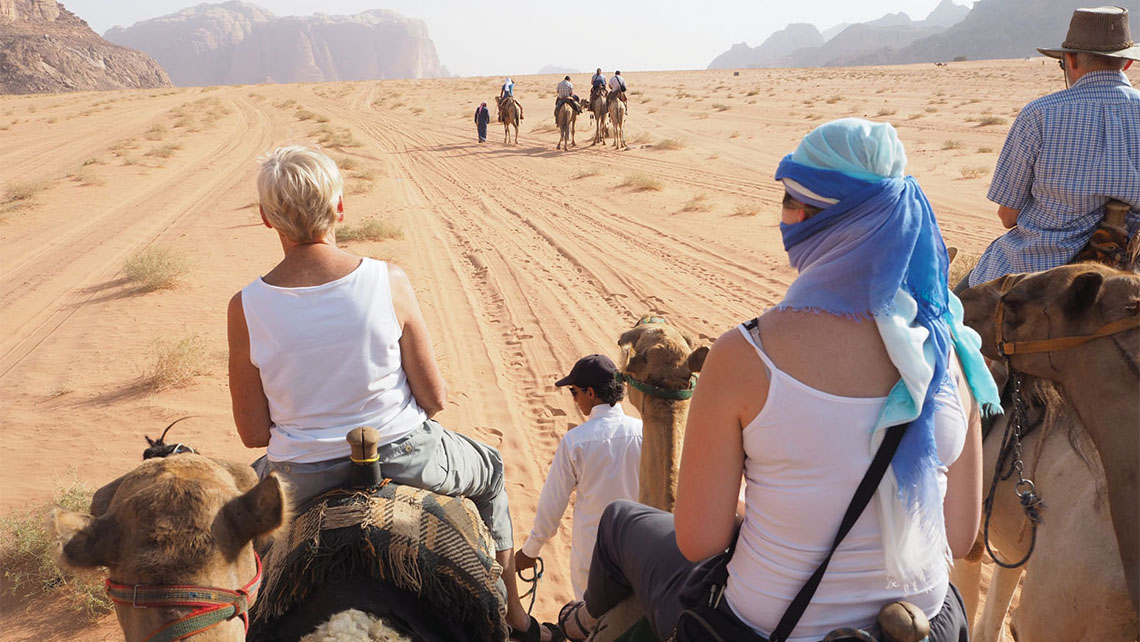 Even with animal rights organizations urging tour companies to stop selling wildlife tourist attractions, ShoreTrips.com reported that camel-ride excursion sales were up 200% for the year ending Sept. 30 compared with the same period the year before. Photo Credit: Michelle Baran

Still, the challenge is that demand for animal interactions not only remains strong in Western source markets, it is also growing from emerging source markets, such as China and Russia, where animal rights groups are only now beginning to campaign for increased awareness.

A comprehensive look at elephant venues in Asia recently conducted by World Animal Protection (the full results will be published in early 2017) revealed that, in Middelkoop’s words, “There are more elephant venues that are more humane, that are not offering those rides and do more of the washing experiences. But at the same time, we see a clear increase in those really bad places, where you have the shows.” Middelkoop added that there is “still a growing demand for both.”

The hope, she said, is that with each victory comes greater awareness. Despite the challenges that remain, the past year has seen the animal rights movement’s influence in the travel sector reach a tipping point, with countless companies signing on. Many tour operators have agreed to stop offering elephant rides, including Intrepid, the Travel Corporation, G Adventures, Pacific Delight Tours, Costco Travel, Alexander + Roberts, Butterfield & Robinson, Collette and Mayflower Tours.

And TripAdvisor has taken it a step further by vowing to stop selling not just elephant rides but any attraction in which tourists come into physical contact with wild animals in captivity or with endangered species.

Perhaps even more significant, according to World Animal Protection, is that the travel review and booking company plans to launch an education portal that will be linked to every animal attraction listing on TripAdvisor. The goal is to provide information about animal welfare practices, and to “enable travelers to make more informed booking decisions,” the company said in a statement.

By early 2017, every attraction listed on TripAdvisor that involves animals will be identified with a paw icon that will link to an education portal providing insight from organizations including the U.S.-based Association of Zoos & Aquariums, PETA, World Animal Protection, Sustainable Travel International and the Pacific Asian Travel Association. It will also provide opinions, research and insights on wildlife conservation, provided by Oxford University’s Wildlife Conservation Research Unit, Global Wildlife Conservation, Think Elephants and Asian Elephant Support.

The decision to create the portal stemmed in part from research conducted by the Wildlife Conservation Research Unit that included analysis of TripAdvisor, revealing that 80% of people left positive reviews of venues with poor animal welfare, which is why World Animal Protection and numerous other organizations are hoping to raise awareness.